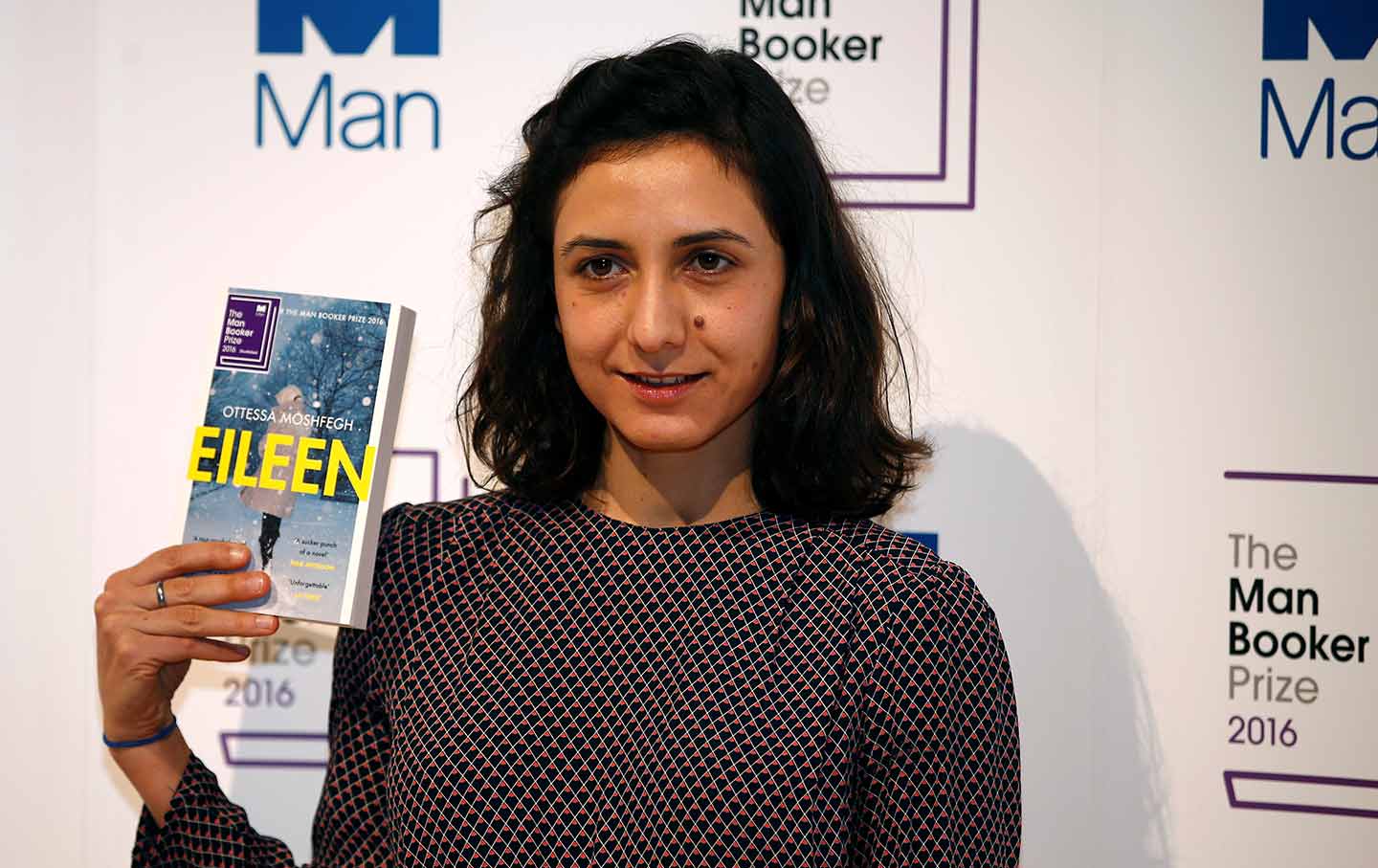 Ottessa Moshfegh poses for photographs during a photo-call in London for the six Man Booker shortlisted fiction authors, on the eve of the prize giving on October 24, 2016. (Reuters / Peter Nicholls)

In his impressionistic book-length essay Humiliation (2011), critic Wayne Koestenbaum proposes that humiliation is determined by context and scenario (he singles out markers of gender, race, and class) as much as by inner evaluations. Its “soundtrack,” he asserts, is a sickened stomach, and it “comes with its own proscenium.” The particular notes it strikes are contingent upon “what you look like, what you sound like, how much money you make, how you walk, how you smell, where you put your garbage.” A time, a place, or a glance can spark the dreaded emotion, but so can an inability to determine what or where one is, the failure to relate or be legible to others: “If we dwell in limbo, in transition, that homeless location, too, is humiliating.” The stories in Ottessa Moshfegh’s first short-story collection, Homesick for Another World, span this entire territory of mortification with precision, humor, and a pleasurable cringe. But what is most seductive about these stories is Moshfegh’s exploration of humiliation as a liminal space, where the unrepentantly rotten world brushes up against its characters’ erring imaginations—an interminable, awkward stage that generates plot, mood, and possibility.

Career-wise, Moshfegh has absolutely nothing to be humiliated about. Her novel Eileen (2015) won the PEN/Hemingway Award for debut fiction, and her novella McGlue (2014) won the Fence Modern Prize. Her stories have been published in The Paris Review, The New Yorker, and Granta, among other magazines, and won her the Plimpton Prize in 2013. At 35, Moshfegh has shown that she can write across genres—experimental, noir, Paris Review story—about people coping with the shame of feeling out of place in the world. The narrator of Eileen is a champion of the abreactive, boldly giving expression to the ways she feels diminished in society. She despises fads, novels, and, above all, the ignominy of inhabiting a dirty home (the kind she was born into, in a Massachusetts prison-industry town she dubs “X-ville”). “People truly engaged in life have messy houses,” Eileen proclaims, “I knew this implicitly at age twenty-four. Of course at twenty-four I was also obsessed with death.” McGlue, also named for its narrator, is the story of a man imprisoned on murder charges who has no ability whatsoever to disguise his personal failings. His self-hatred is far less processed than Eileen’s, given to leaks rather than formulations.

The sickness to which Moshfegh’s new title alludes is frequently literal: Some of her characters yearn for home, but most are nauseated by it. As with Eileen, her characters’ shame festers most biliously where they live. Many reside in small towns, each dirty and disappointing in its own way. The narrator of “Slumming” is a divorced high-school English teacher who travels every summer to her vacation home in a small town, where she gets wasted. The house repulses her more with each passing year: “Each summer I drove up to Alna, I’d find the house altered—a new perfume lacing the humid air, menstrual stains on the mattress, hardened bacon grease splattered on the kitchen counter, a fleck of mascara on the bathroom mirror like a squashed fly.” A later story, “Nothing Ever Happens Here,” takes place almost entirely in a house in Los Angeles that the (far cheerier, greener) narrator rents a room in. (What short-story collection about humiliated losers would be complete without a couple set in LA and New York City?) He’s 18 and has left his family in Gunnison, Utah, to pursue his dream of becoming an actor. But Moshfegh is keen on turning every destination into a gruesome layover. In this instance, the character is recounting this part of his life from some undisclosed location he’s moved on to, but it’s clear that his LA excursion is over (“I had big dreams”). “The house was white stucco,” the story begins, “ranch style, with tall hedges and a large semicircular driveway. There was a crumbling pool out back full of rust stains and carcasses of squirrels that had fallen in and slowly starved to death.”

Meanwhile, the occasional descriptions of nature that crop up in Moshfegh’s stories read like the lackadaisical attempts of sloppy indwellers. Here’s a sampling, each from a different story (“Bettering Myself,” “A Dark and Winding Road,” and “The Weirdos,” respectively): “A cloud flew around in the sky”; “Everything was beautiful and dark and powerful the way nature is”; “A crow came and sat on the sill of the window. It seemed to roll its eyes.” No matter where you are in the book, you can bet that if the air seems fresh, it’s just Moshfegh being droll. Her dismissive tone is a counterpart to the observations of characters who are far more concerned with maintaining a minute, almost claustrophobic sense of control over their thwarted lives. Moshfegh shows her characters taking out the trash a lot. The lens of these stories is, almost without exception, fitted close-up on conversations, petty rumination, and, of course, squalid interiors.

“If I ever write a book,” muses the narrator of “Malibu,” “it will be filled with tricks and tips for men.” The narrator of this sharp and scummy tale is a self-proclaimed “regular” guy who just happens to know better than everyone else. Moshfegh has a particular flair for composing male characters with an inflated appetite and sense of self-worth that draws attention to, rather than masks, their teeming insecurities. Many details in her stories strike me as either the underside of, or an antidote to, writers—Kerouac, Thompson, Bukowski—who helped glamorize a certain style of brilliant male excess, that infamous diet of cigarettes, alcohol, sexual prowess, and drugs. The narrator in “Malibu” feels that he can never be attractive enough, always shaving, picking at pimples, dousing himself with (rather than ingesting) chemicals. He preens himself until he vomits and bleeds. He buys cigarettes, but only to hide the smell of his uncle’s house. He’s so fixated on his partner’s physical appearance that the sex he does manage to achieve is grotesque. His best “tip” is one that no self-respecting intellectual man would ever take him up on: “Want what you deserve. You’ll probably get it.”

And none of Moshfegh’s characters “get it”: It’s part of what makes her writing so inspiring. The female narrator’s boyfriend in “The Weirdos” has overdosed on his own “theories” of reality. One is that light carries knowledge; another is that intelligence comes from the heart, blood type, and magnets. Like 30 Rock’s Dennis Duffy, his narcissistic thirst for mastery is relentless, a quality that Moshfegh nails to the last dirty detail. “I noticed you spilled your coffee,” he says self-righteously to his girlfriend, “so I wiped it up for you.” Of course, he does more than that with his hands.

How (Not) to Fake Your Own Death

House of the Dispossessed

Moshfegh’s female characters are not much better, but they do tend to come off as less cartoonish—or, at least, freer from looming literary archetypes. The narrator of “Slumming,” for instance, refers to Alna’s townies as “zombies,” mostly because they’re indistinguishable to her. “They all had the same flat, long, brown hair,” the narrator opines, “the same pinched eyes, bulbous mouths, and throats like frogs. Their bodies were so fat, their breasts hung and rested on their knees.”

Moshfegh closes her book of degenerates with a dark fairy tale told from the perspective of a precocious and murderous little girl. Urzula is deeply bonded to her kid brother, Waldemar, through a shared dream to escape this world for another, which they determine can be achieved only by dying or killing the right person. It’s a little Maps to the Stars, without the Hollywood excess and gleam. “I come from some other place,” Urzula insists. “I don’t know what it is. But it certainly isn’t this place, here on Earth, with all you silly people. I wish I knew what it was, not because I think it would be great to tell you about it; I just miss it so much.” Like most of Moshfegh’s characters, Urzula looks at everyone around her with disgust (“Who is smarter than me?”), except for one woman she describes briefly, who lives between two garbage cans. She’s the one person in town who everyone agrees is “crazy”; to everyone except Urzula, she’s the embodiment of shame. “She smells like so many toilets. But does as she pleases,” Urzula says. “She is a grown woman.”

Just like the advice from the “regular” guy in “Malibu,” what Urzula offers is no prescription. This type of freedom is not what most people aspire to, yet for several minutes after finishing that final story and setting Moshfegh’s book aside, I delighted in a fantasy of myself as a noxious, enigmatic heap of loneliness that nobody would touch—and therefore could be anything. Then I felt embarrassed for myself.