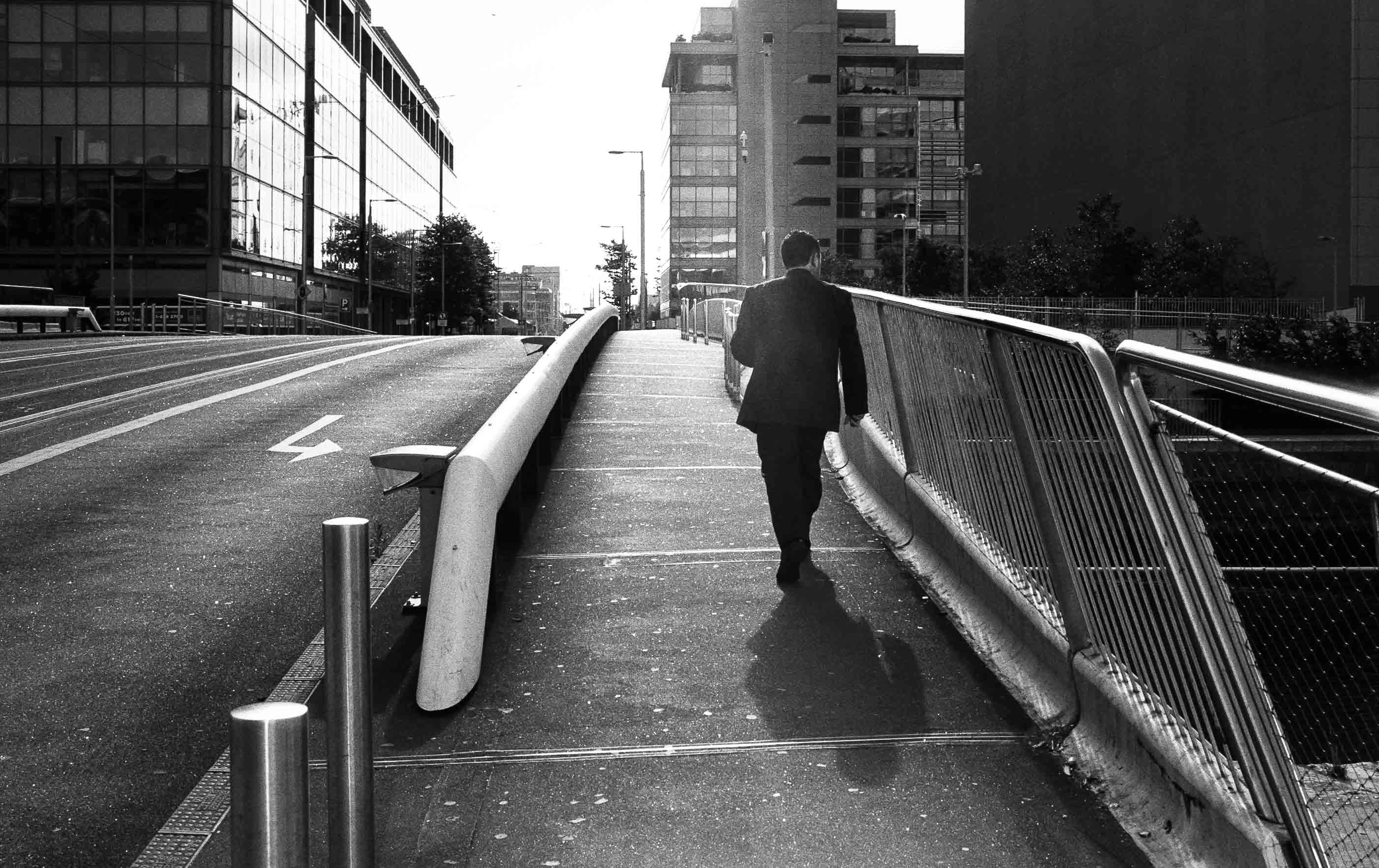 Say you want to find someone who doesn’t want to be found. If you have enough money, but not quite enough, and ditto for computer skills, you can hire a skip tracer, an unlicensed private investigator. This is what Frank Ahearn used to do for a living, before he developed a business, in 2001, that helps his clients disappear. In the old days, Ahearn relied heavily on a tactic called “pretexting”: acquiring information on the person you’re investigating by pretending to be them. Ahearn tells journalist Elizabeth Greenwood in her new book of essays on modern-day death hoaxes, Playing Dead, that his advice on using the technique is to be very persistent: “It’s like dating,” he explains, “every no leads to a yes.” Who’s not going to believe you are who you say you are if you insist on it and are baseline pleasant? Together, these form the common denominator for pursuer and pursued.

Greenwood’s appealing book, which includes extensive interviews with Ahearn, is fittingly structured around questions of authenticity, but she often falls for their pretexts. The book is a collection of interwoven reports on people who fake their deaths, disappear, and reinvent themselves. Greenwood’s sprawling and scattershot group of subjects includes unsuccessful death hoaxers, firms that will orchestrate your disappearance for the right price, and her own attempt to shirk hefty student-loan debt by procuring a death certificate in the Philippines. This latter story unfolds over the span of the book and functions as its dramatic and moral center. Greenwood presents her subjects as fake-death gurus, doling out second-life advice to her readers and herself. Throughout, she wonders whether she will really go through with her plan.

Faking your own death or disappearing is not illegal in America, so long as you don’t file a police report or a death certificate, or try to get a library card, or file to collect life insurance. To provide some perspective, Greenwood notes that there are 90,000 people missing in the United States at any given time, but there have only been 564 reported cases of life-insurance fraud in the past 25 years. She focuses on the marquee cases of “pseudocide,” like those orchestrated by Ahearn, who, he says, charges his clients an average of $30,000. Greenwood’s single-minded pursuit of faked-death narratives, which are relatively rare compared to disappearances (even Ahearn doesn’t recommend it as a strategy), scarcely hides her fascination with the glamor of escapism. But even in the death-fraud underworld, access and authenticity are inseparable.

Greenwood is not concerned with bodies so much as with the traces they leave behind, which, she suggests, have never been more varied than they are today, making them a worthy subject of her investigation. Nowadays, we have several additions to the list of traces: ever-present public cameras; government and corporate databases, choked with the personal stats of its citizenry; security and border checkpoints; and social media. Greenwood spins out her essays along trails of cash flow, digital footprints, grieving and complicit lovers. Life and death reside now more than ever in the eye of the beholder.

Take, for instance, Samuel Israel III. He was the manager of a hedge fund until he was sentenced to 20 years in prison, in 2008, for financial malfeasance and fraud. In response to his sentence, Israel hatched an ill-fated plan, partially inspired by the plot of the Robin Williams comedy RV, to fake his own death. Israel leapt off a bridge in Bear Mountain, New York, onto a narrow construction net to feign death for the security cameras. Then, he went on the run. He chose “professional poker player” as his alias, which might be read as a cooler and more honest version of managing a hedge fund—obviously, it seems more fun. While he was on the lam for the next couple months, before he surrendered, Israel claims he tried to commit suicide for real, but failed.

Playing Dead is brilliant as a series of entertaining character reports, especially of individuals who hope, if unconsciously, that buying into the death-hoax community will boost their self-esteem, their sense of self-worth. Patrick McDermott, whose biggest claim to fame is still probably having dated Olivia Newton-John, faked death-by-drowning only to be traced down by NBC’s Dateline (embarrassingly) after their investigators noticed a group of IP addresses out of Puerto Vallarta, Mexico, obsessively clicking on a Web site dedicated to unraveling the mystery of his disappearance. Another woman tries to convince the author that Michael Jackson is still alive. She calls Greenwood one night, pretending to be Jackson, seemingly confident that this ploy will validate her crusade. “I’ve always been around on the Internet,” the woman tells her, imitating Jackson, “but I’ve been very quiet.”

Unfortunately, Greenwood’s account of what all this adds up to is unconvincing. She judges Israel to be “a good person,” who had “gotten away from himself. He’d lied to the investors when he didn’t have to. He’d gotten divorced, and he never considered himself the type to end a marriage. He’d joined an underworld where secrets ran deep. Nothing was as it seemed.” Sure, but isn’t it more relevant that he benefited from defrauding people up until the point when he was caught?

Greenwood casts blame, instead, on the Internet. “Today, disappearing seems virtually impossible,” she writes. “This, I think, is what accounts for our renewed fascination with it.” Greenwood insists that pop culture is full of characters missing and presumed dead—Amy Dunne (Gone Girl), Bart Bass (Gossip Girl), Walter White (Breaking Bad), Don Draper (Mad Men)—and that these narratives have become a national obsession, particular to our times. “More than ever, audiences hunger for stories of deliberate disappearances,” she concludes. Then she cites some studies on how being on the Internet leads to loneliness and depression. She even gets a tepid vote of confidence from Ahearn, who tells her, “Technology allows us to be who we want, and it’s not always ourselves.” Unlike with Greenwood, I get the feeling it’s exactly this kind of deception Ahearn lives for.

House of the Dispossessed

But is Don Draper the fantasy? Or does he represent the reality that many people are trying to escape? Greenwood overlooks this tension, which reveals her leap from escapist outliers—wealthy white men, primarily—to an attempt at identifying a popular phenomenon.

The premise of the book fizzles at the end, when Greenwood admits to the reader, and perhaps for the first time to herself, that she never really intended to live in Manila as a fugitive from the IRS, without Twitter or anything. This does not come as a huge surprise: no author, no book tour. But it does raise a question about her motivation to write the book: Why go through the process of obtaining a death certificate without a death wish of her own? Greenwood’s morbid curiosity, she reveals, has in fact been an exercise in self-exploration all along. But she fumbles the final realization that all she really needed was to live honestly, positively—as herself. “I learned that it was all okay. That I would be okay,” she writes. The bouncy conclusion of it all is something like: Learn to embrace life, and you will find a cohesive, verifiable, and “real” person has been there the whole time. Just waiting to find an ending for your book, as it were.

It seems a grave error to treat disappearances, deletions, and bold displays of counterfeit identity as fads that block us from our true beings, and not as the reality that conditions every story we tell about ourselves. In the same chapter, Greenwood halfheartedly reformulates her student-debt problem, the one that made her want to disappear in the first place, as a kind of necessary toll that keeps society, responsibility, and justice in order. “Nothing is ever free,” Greenwood writes. “There is no such thing as getting away with it.” Except people get away with things all the time—telling oneself everything is okay, for instance, which, incidentally, is free. Greenwood’s insistence upon building authentic identities from the wreckage of chaotic human traces obscures the most mundane, distinction of all: No one can truly fake death, it’s life we fake our way through.