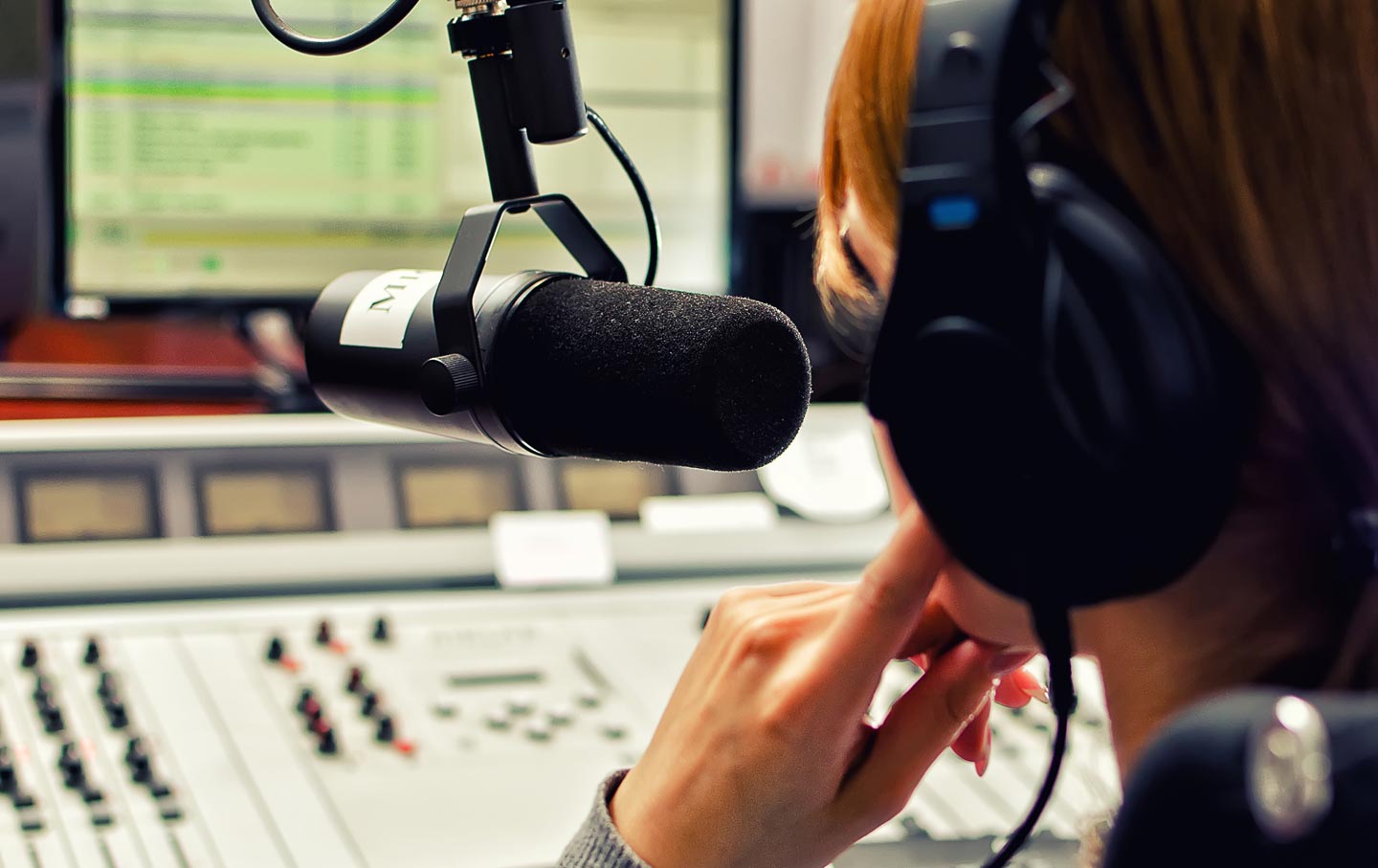 After five months of interning at WNYC for about 24 hours per week, Ben Ellman had drained every dollar in his savings account. He was working part-time at an Italian restaurant and living with his parents in Yonkers in order to stay afloat on the $12-per-day travel stipend he received from WNYC.

Ellman commuted on the Metro-North train from Yonkers to New York City on the days he was scheduled to intern for The Brian Lehrer Show. On his days off, he worked at the restaurant. Looking back, he says he wishes the show would’ve been more receptive to his story pitches while he was working there and earning less than $40 a week.

“I can’t intern forever, and that type of exposure would’ve been great,” he says.

Ryan Kailath had a career as a software developer before he made a pivot into media in 2014. It was only his full-ride scholarship to the CUNY Graduate School of Journalism and his accumulated savings that enabled him to pursue an internship at WNYC.

“Roaming the hallways at WNYC, shaking hands, and networking with everybody I met there has helped me get my career started,” says Kailath, who now reports for WWNO, New Orleans’s public-radio station.

But what happens to young journalists who can’t afford to jump-start their career by working for free? Christine Trudeau, a recent graduate of the Columbia School of Journalism and a citizen of the Prairie Band Potawatomi Nation, was accepted to the WNYC internship program for the summer of 2016. She tried negotiating with WNYC and applying for various supplementary scholarships, but eventually she was forced to decline the offer because she couldn’t survive on the $12-per-day stipend. “Not a lot of Natives go into journalism or go to Columbia and receive offers for internships at WNYC,” she says. “It’s unfortunate that I couldn’t get the experience.”

WNYC isn’t the only media outlet facing controversy about intern pay. Around the same time Ellman was interning at the station, in 2013, a slew of lawsuits were filed by unpaid interns at places like NBCUniversal, Hearst Corporation, Fox, and Condé Nast. Some judges ruled that the interns should’ve been paid minimum wage, which encouraged NBC, MSNBC, and Fox to change their policies to compensate interns for their work. But other outlets eliminated their internship programs altogether. (The Nation previously paid its interns a stipend of $150 a week; in 2013, interns began earning minimum wage, and in 2015 their pay was increased to $15 an hour.)

Ellman says that while young journalists have always been encouraged to pursue internships for entry-level experience, he’s concerned that unpaid or low-paying positions are exclusively accessible only to those who can afford to make financial sacrifices. The WNYC internship is technically unpaid (the $12 per day is considered a travel stipend, not a wage), and is typically open to current students or those who have graduated within the last 12 months.

“It rules out people who might’ve gone to community colleges or not gone to university and have great potential, but can’t afford to spend three days a week working full-time for $12 a day,” Ellman says.

Last summer, a small group of media professionals including Ellman, Kailath, and Mickey Capper—a radio journalist who has done freelance work for WNYC—started talking about how they could bring their concerns about intern pay to the attention of WNYC and the public. They had heard that the station was discussing the issue, so they waited to see if there would be any changes to the summer 2016 internship program. But when WNYC posted the summer positions on its website with the same $12-per-day stipend, Capper e-mailed the group about starting a Change.org petition.

“We were all coming from a place of love for WNYC,” he says. “We wanted them to consider interns from all types of economic and cultural backgrounds; otherwise, they’d be missing out on amazing talent.”

A former WNYC intern who currently works at the radio station and was involved in the organizing drive spoke to The Nation on the condition of anonymity. She says that while interning at WNYC, she accrued $7,000 in credit-card debt, went to school full-time in order to qualify for the maximum amount of loans, and worked a side job—all so she could afford to live in New York City and work at the station. She said that interns are an integral part of WNYC’s day-to-day operations.

“I understand that some people believe that interns are doing community service by working for little or no pay, but at the end of the day it’s labor and it should be seen as a business transaction,” she says.

Capper and the group drafted a petition and published it in April. “While $12 a day makes internships difficult for everyone, it renders this potential first step nearly impossible for people who can’t afford to spend so much time earning so little in New York City,” it read. The authors argued that the low pay “excludes the smart, driven individuals who ‘reflect the diversity of the communities’” WNYC is looking to reach.

The petition began to circulate on social media, with WNYC supporters, staffers, and former interns showing their support by tweeting and commenting on Change.org. Alex Goldman, a former WNYC intern and current co-host of the podcast Reply All, wrote: “There is always talk about how public radio wants to represent a diversity of voices, and there’s no doubt that its producers are talented, but this hurdle to entry shuts many voices out of the conversation. Paying your interns will make the content WNYC produces, and the experience of working at the organization, much richer.”

Jody Avirgan, who worked at the station for eight years, wrote that “interns are in many ways the lifeblood of the organization” and “are asked to contribute massively not just with the production but the editorial decision-making across all the shows.”

By the time Capper and the group arrived at WNYC’s community-advisory board meeting in May to present the petition, more than 500 people had signed it. When the public-comments section of the meeting began, Capper and several other organizers took turns at the microphone, telling their own stories and urging the station to pay interns a fair wage.

Ann Heppermann, an educator and independent producer who has worked for WNYC, added a comment about the exclusivity that the current stipend promotes. She said that when she taught radio at Brooklyn College in 2005, none of her most promising students could benefit from the internship program because of their economic backgrounds. Since becoming an educator at Sarah Lawrence College, Heppermann has witnessed how financial privilege opens doors for early-career journalists.

“What breaks my heart is that we are in the second golden age of radio…and I’ve had at least six students who’ve had internships in public radio, and now are off getting jobs at places like Panoply or Gimlet,” she said.

In general, the crowd seemed shocked by how little the interns are paid. One community member asked, “Where is the state labor department in this picture? What regulations, if any, cover internships?”

Capper responded that the regulations are unclear at the moment because of WNYC’s nonprofit status, which means that unpaid workers there can be classified as interns or volunteers.

“We’re not making a legal argument,” he said. “We’re just saying that this is the right thing to do and that [a fair wage would] make for a better station and industry.”

Shortly after the organizers spoke and answered questions, Jennifer Houlihan Roussel, New York Public Radio’s senior director of publicity, read a statement from Brenda Williams-Butts, the vice president of recruitment, diversity, and inclusion, announcing that the station was “committed to paying all interns starting in calendar year 2017.” The statement noted that the change of policy was only in the implementation stage and that WNYC was still in the process of working out details of exactly how much the wage will be.

Speaking with The Nation, Williams-Butts says that she’s always been a champion of paid internships and the diverse talent they inevitably bring, and that consideration of an hourly intern wage had been under way before the circulation of the petition.

“A real conversation happened over the past couple of years with the understanding that we had to figure out a way to pay for it,” she says. “We certainly appreciated the passion and engagement around [the petition], but we have been talking about [paying interns] for a while.”

Williams-Butts says that the station’s human-resources budget will fund as many internships as it can. To start, the number of interns might decrease, but Williams-Butts hopes that WNYC will be able to expand the internship program after figuring out how to financially sustain it. The station has not yet determined what the intern wage will be starting spring 2017, but it will be more than the current $12-per-day travel stipend.

“We definitely want to be aligned with other nonprofit and public-media companies,” Williams-Butts says.

Kailath says that he’s proud of WNYC for making changes, but hopes the station will maintain the same number of interns that it currently has. “If they decide to do away with a lot of their internships, that’s cool.” But, he says, “they might find that suddenly a lot of employees are unhappy with their jobs, because there’s a lot of necessary work they’ll have to do without them.”

Editor’s note: An earlier version of this article quoted a statement from Brenda Williams-Butts announcing that paid internships at WNYC would begin in fiscal year 2017. In fact, the statement referred to calendar year 2017. The text has been updated.