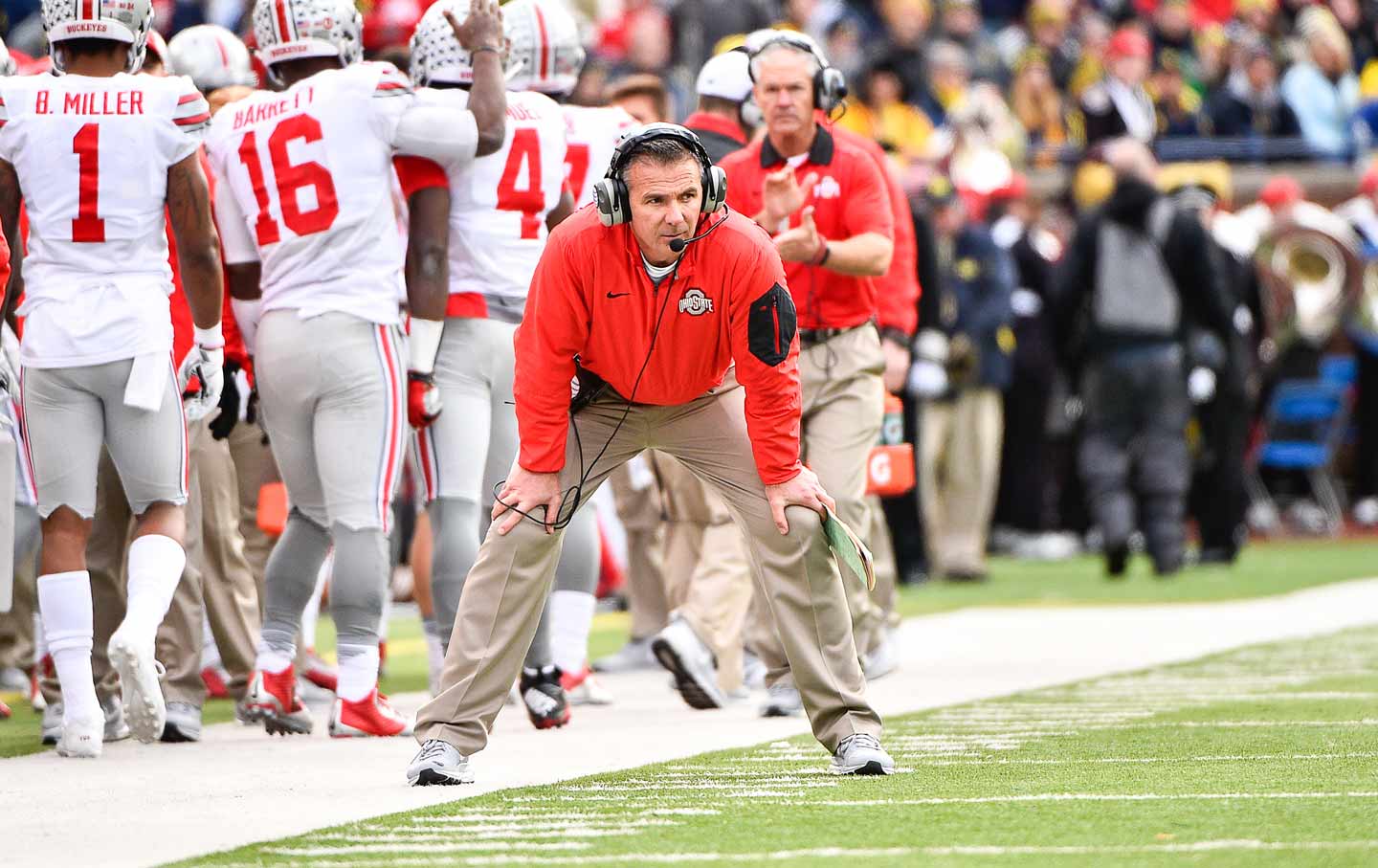 Revered Ohio State Buckeyes football coach Urban Meyer has endorsed his state’s governor, John Kasich, for president. This might provoke relief in some quarters. Kasich is portrayed in the press as a kinder and gentler version of his Republican primary opponents, and at least it’s not another person from the sports world using their cultural capital to back the thug-campaign of Donald Trump. Yet this fulsome endorsement by Meyer, complete with video testimonial, also reeks. It reeks of payback to Kasich for backing a near-billion-dollar college football empire that has enriched Meyer to a staggering degree at the expense of his players.

Governor Kasich was there for Urban Meyer after fellow Big Ten football team Northwestern took steps to organize into a union in 2014. The Wildcats were fighting to have a say in issues relating to healthcare and their schedules. They wanted a seat at the table. The National Labor Relations Board, in its initial ruling, stated the patently obvious: that they are in fact campus workers and should not have to exist in some sort of constitutional purgatory. Yet the ruling was also only confined to private universities like Northwestern, Stanford, and Notre Dame. Public universities are ruled by state labor boards, and immediately—in full panic mode—the Ohio legislature passed a measure strongly supported by Kasich that declared “university athletes are not employees and thus are unable to unionize.” State House Appropriations Committee Chairman Ron Amstutz, a Republican, said, “I think this is a statement of what we all thought was obvious. Athletes are not employees of their university.”

Kasich’s support for preemptively crushing even the right for the Buckeye players to organize was just the latest chapter in his efforts aimed at attacking the standard of living for public employees across the state. After his efforts to turn this onetime union bedrock into a right-to-work state were overturned by popular referendum, he “issued an executive order stripping away union rights from nearly 10,000 independent home health-care and in-home child-care workers.” Kasich has also overseen what The Washington Post described as an “education mess” across the state, gutting public schools to fund a scandal-ridden charter sector while being a slavish proponent of standardized testing. While campaigning, Kasich, in an attempt at humor, said, “I would abolish all teacher’s lounges, where they sit together and worry about ‘woe is us.’”

But alas, not all public employees have felt the sting of the Kasich-austerity agenda, not to mention his rapierlike wit. One public employee in particular—and a teacher at that!—by the name of Urban Meyer has done just fine. As the International Business Times reported yesterday, “The endorsement comes less than a year after the university’s board of trustees, who are appointed by the governor, approved Meyer’s new contract, in which his compensation averages $6.5 million a year.” Meyer also is allowed, as part of his deal, extensive use of a private plane on the state’s dime.

This contract is the second most lucrative in all of college football, surpassed only by that of Alabama’s Nick Saban. It also is roughly 150 times what Ohio State legend Woody Hayes earned during his last year of coaching in 1978, when he made $42,000. That was when Ohio still had a manufacturing base, a stable middle class, and was yet to be known as “the Rust Belt.” Now it’s a bold new world, where the football coach is part of the 1 percent and works with the governor, a former executive at the now-defunct Lehman Brothers investment banking firm, to enrich himself and keep his players powerless.

IBT also included this juicy nugget: “According to Ohio State’s website, ‘As an employee of the university, it is inappropriate to either participate in political activities or solicit participation of others in political activities, either during normal business hours or at any time when using university assets.’ Meyer’s university biography says he has brought in Kasich as a guest to speak to the Ohio State football team in the past.”

But there is one set of rules for Urban Meyer and another for everybody else. This isn’t just Ohio, and it isn’t just the Republican Party. What it signifies is a window into understanding why there is so much anger, so much polarization, and so much despair at the state of politics in this country. It’s a graft, and it’s modeling a college football program, not to mention a proud institution of higher learning, on a highly leveraged hedge fund complete with obscene executive pay. Here’s hoping that Ohio doesn’t end up like the last investment banking firm that employed John Kasich.