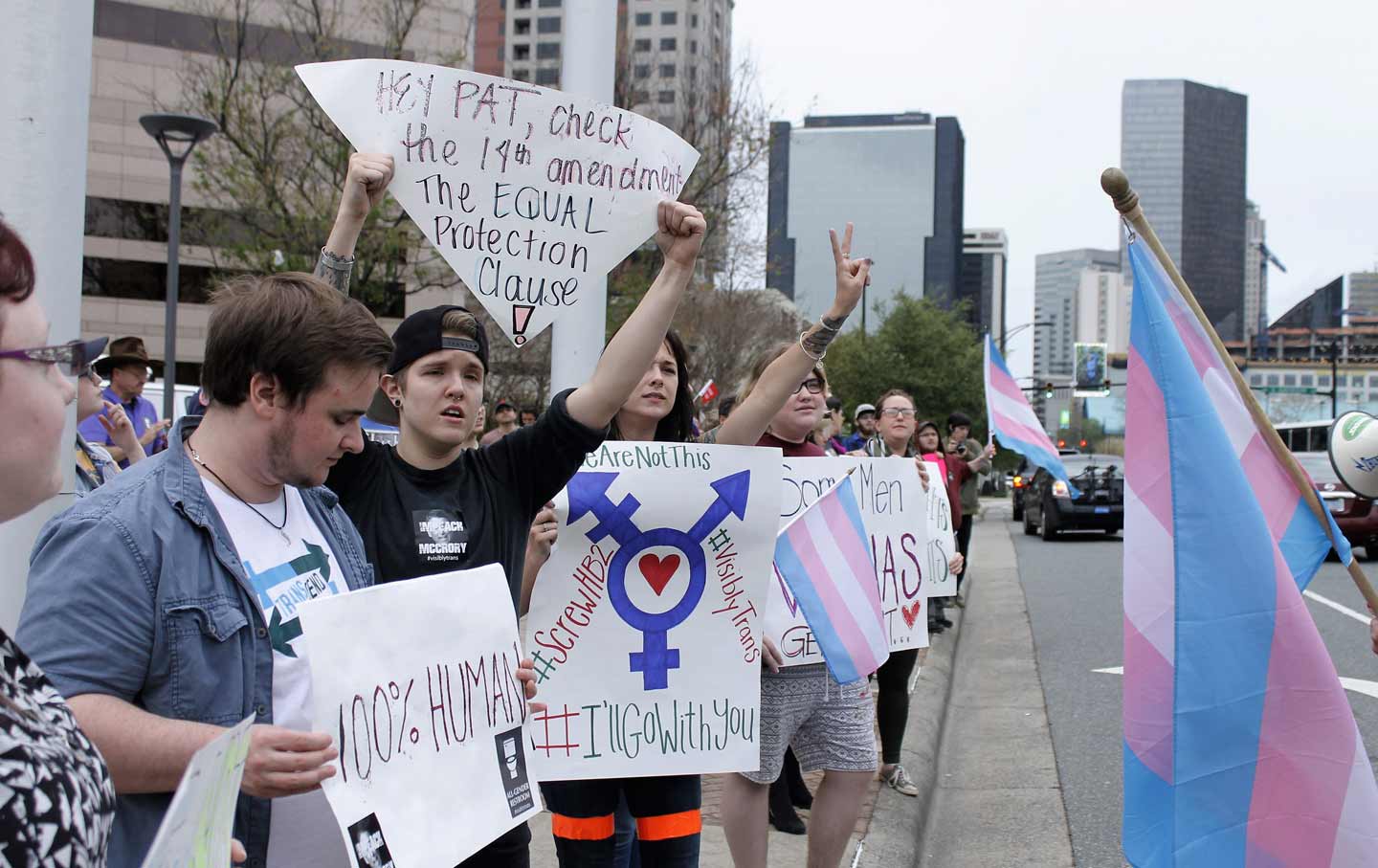 North Carolina could do a lot of things to show that it takes male violence against women seriously. It could process the rape kits sitting on dusty shelves, for starters; the state doesn’t even require law enforcement to track how many there are. (In Fayetteville, the police chief revealed with some chagrin last year that the department had destroyed 333 kits collected before 2008 in order to make space in its evidence room.) How pathetic is it that Manhattan District Attorney Cyrus R. Vance Jr. (a damn Yankee) and the big, bad federal government had to send funds to help process the backlog? What ever happened to state sovereignty?

North Carolina could also pass a law declaring that one can withdraw consent to sex once sex has begun. Right now, thanks to a 1979 State Supreme Court ruling, once you say yes, you can’t say no—even if, as in one recent case, the man continues after the woman begs him to stop because he’s hurting her. Right now, state law says he was within his rights to tear up her vagina no matter what she said or did. And what about domestic violence? In 2013 (the most recent year for which data is available), 55 women were murdered by men in “single-victim/single-offender incidents,” the vast majority by men they knew. Yet men convicted of misdemeanor domestic violence can still own guns in North Carolina. Well, some things are sacred.

I’m sympathetic to the fears of women who have been traumatized, but fear can’t have the last word.

One thing North Carolina should never have done, though, if its goal was preventing real-life male violence against real-life women, was to pass HB2, the Public Facilities Privacy and Security Act. Overturning Charlotte’s recently passed trans-friendly bathroom bill, HB2 requires people to use the restroom and locker room of the sex on their birth certificate in public schools, colleges, and universities and in government buildings, and bars municipalities from passing LGBT-friendly ordinances. (Just for fun, the legislation also prevents cities and counties from passing a local minimum wage for private employers.) The ostensible reason for the bathroom rules is that if transgender women could use the ladies’ facilities, so could men dressed as women, and either group could go in there and commit sexual assaults and no one could do a thing about it. Never mind that supporters of the bill couldn’t point to a single case of trans women committing such crimes in ladies’ rooms, and municipalities around the country with trans-friendly bathroom rules report no increase in incidents of men doing so, either. The real reason is to foment disgust and horror at the existence of trans people in order to keep the Republican base excited, now that same-sex marriage is off the table thanks to the Supreme Court. It’s no accident that the bill was passed after a mere 30 minutes of debate in a one-day special session and signed the same night by Governor Pat McCrory. Nor is it an accident that HB2 contains provisions making it more difficult to sue one’s employer under a state law that protects workers from discrimination on the grounds of sex, race, or religion. If the legislators care about women, why would they be OK’ing bias on the job?

The bathroom provisions have rightly outraged the nation. Bruce Springsteen, Pearl Jam, and other artists have canceled their concerts; PayPal decided not to open a global-operations center that would have employed 400 people; Duke University reports that academics are refusing to attend its conferences. Boycotts hurt a lot of innocent people, but this one seems to be having its desired effect: Governor Nikki Haley has said she’ll veto a similar law in South Carolina, and Georgia Governor Nathan Deal says he’ll do the same in his state. That’s great.

The threats to women’s safety are posed by men, not trans women—so why should trans women be made to suffer for those sins?

I don’t think there’s anything to be gained in mocking women for being concerned about their vulnerability to predatory men. One of the main activities—and achievements—of feminism has been to raise awareness of just how risky ordinary life is for women. The man in the hotel room next door could be filming you; your ex-boyfriend could be putting your naked photos online; your date could be putting a roofie in your drink; that seemingly nice guy who drives you home from a party could rape you. Women have always lived with fear and strategized around it—splaying the keys in your fist as you walk down a dark street, getting up and leaving an empty subway car, giving that cat-caller the smile he wants, saying you’re married when you’re not. In fact, women are sometimes attacked in the bathroom area of bars and clubs, and I won’t pretend I don’t think about that possibility when, for example, the ladies’ room in a restaurant requires a trip to an otherwise empty basement or second floor. There’s a reason why so many ladies’ rooms situated in office-building hallways require a key or a key code. In many public bathrooms without this kind of security, a man could easily push his way in—and some do, including a few who dress in women’s clothing.

I’m immensely sympathetic to the fears of traumatized women, but fear can’t have the last word—otherwise, no Muslim could take a plane, no Sikh could wear a turban, and no black person could take a walk in a white neighborhood. The simple fact is that the threats to women’s safety and privacy are posed by men, not trans women—so why should trans women suffer for these men’s sins? It doesn’t seem right, moreover, to force trans women to use the men’s room, where their own safety may be at risk. Ironically, the bathroom bill “solves” an imaginary problem by creating a more realistic one, because it will force trans men to use the ladies’ room. Having to endure the presence of a female-looking person who may be a male pervert in a dress seems far less of a concern than having to wonder if that burly man at the sink is trans or not.

North Carolina NOW, NC Women United, and the NC Coalition Against Sexual Assault have all come out strongly against HB2. They know a lot more about the real threats to women’s safety than the Republicans who passed this unjust law.

Earlier this month the fundraising site for the National Network of Abortion Funds’s 7th Annual Bowl-a-Thon was hacked—twice. The site’s ability to take in donations was seriously compromised. Many participants received e-mails supposedly from NNAF showing pictures of a fetus and a baby, captioned, “I hope I grow up big enough to go bowling someday” (I got it three times). A similar e-mail contained a link to the Priests for Life website, so I think we all know what the hackers think about women’s reproductive rights. That they think they are doing something good by using the deep poverty of abortion-fund clients to keep them pregnant against their will tells you everything you need to know about these so-called pro-lifers. You can read more here and here.

NNAF has taken down the site as it works with law enforcement to ensure security. But the Bowl-a-Thon goes on! At the time of the attack, the Bowl-a-Thon had collected over $627,000 of its $800,000 goal. You can help NNAF climb the rest of the mountain. If you’ve already given but can dig a little deeper, if you meant to give but hadn’t gotten around to it, if you don’t usually give to this cause but want to send a message to the increasingly aggressive opponents of legal abortion, please donate now.

Just go here to support the fund of your choice.

While all the funds can use your help, please consider a special gift to one (or more!) of the recently created funds in underserved parts of the country. Some of these counted on the Bowl-a-Thon for the entire year’s funding. Here’s a sampling:

NNAF reports that in 2014 it “received 116,000 requests, and assisted 30,000 individuals seeking $3.5 million in funding for abortions, transportation assistance, translation, and childcare.” Even a few dollars can make a huge difference for a woman with a crisis pregnancy, who may not even have money for bus fare to a clinic hours away. And by giving now, before you forget (ahem), you will not only be helping poor people in crisis, you will be showing solidarity to much-beleaguered abortion providers, who deal with threats every day—online and in the real world too.

Please be generous. Don’t let the bullies and cybercriminals win.