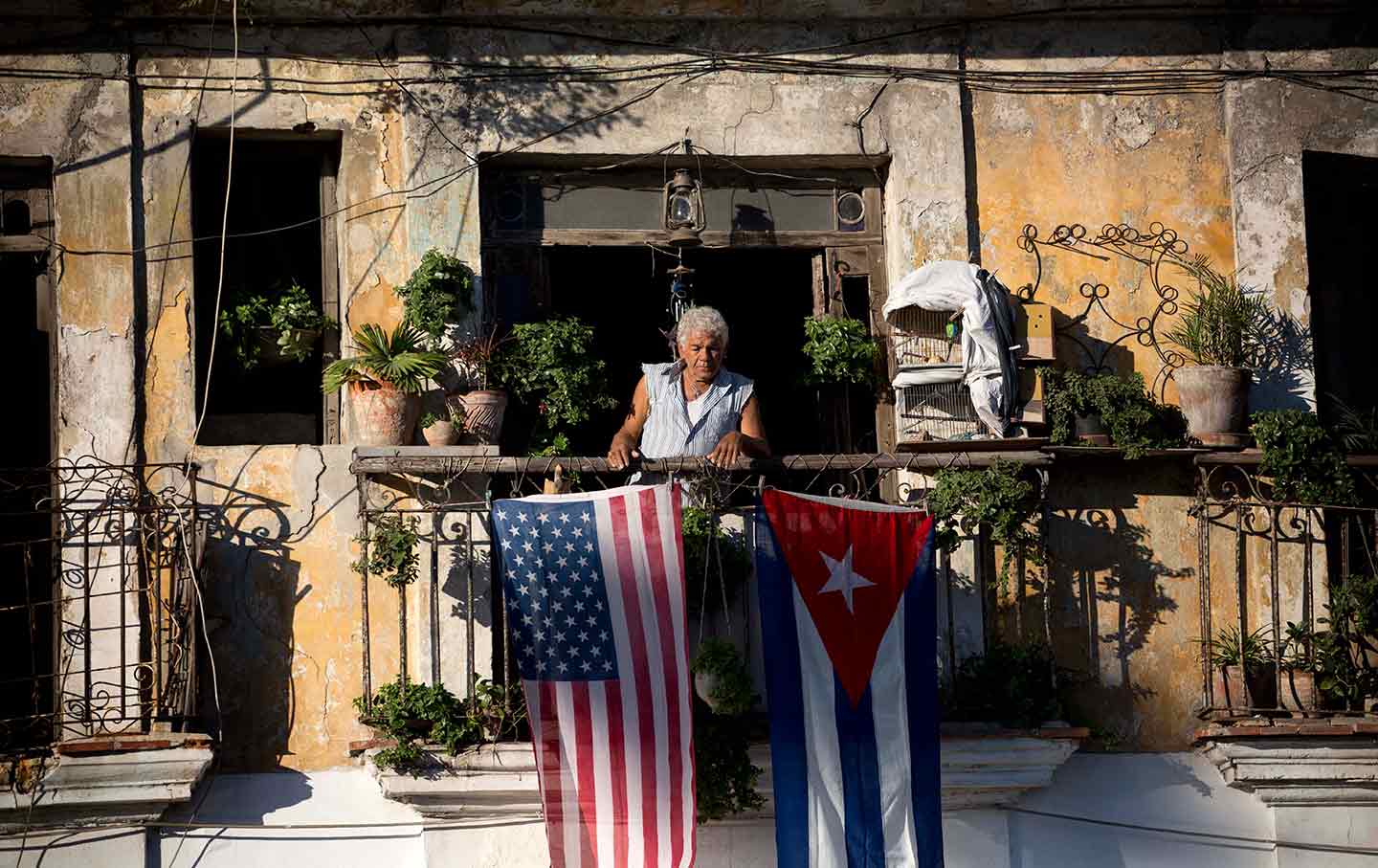 Javier Yañez stands on his balcony where he hung an American and Cuban flag in Old Havana, Cuba. (AP Photo / Ramon Espinosa)

Imagine this utopian scenario: On Friday afternoon, President Trump walks up to the podium at the Manuel Artime Theater in Miami, where he is scheduled to announce his new, draconian, US policy toward Cuba. “I know you expect me to roll back my predecessor’s historic breakthrough on Cuba policy,” he tells an audience of hardline Cuban-Americans, including veterans of the failed Bay of Pigs invasion. “But let me tell you about that long, drawn-out Cuba policy review my administration has been conducting since January. They tell me the policy of normalization is actually working! It is advancing US business and strategic interests, helping Cubans become independent of the Communist state. No kidding. Who knew? It’s working!”

“Just this week,” Trump could say, “I have heard from Google executives how well their effort to connect Cubans to the Internet is going. And AirBnB has told me that over the past two years they have put $40 million into the pockets of average Cubans who are renting their homes to US tourists. $40 million! People, that is a helluva lot more than our pathetic USAID democracy programs are doing for the Cuban people, believe me.”

“And guess what, this week my daughter, Ivanka, received an appeal from 55 female Cuban entrepreneurs thanking her for, and I quote, ‘your interest in and dedication to women.’ They informed her that Cuban women have fueled the growth of the private sector in Cuba. They invited her to come to Cuba to ‘support travel, trade, and exchanges between our two countries.’ So if I restrict travel now, then Ivanka and Jared will not be able to go to Havana and scout future hotel sites for the Trump organization. Also, I have just received a letter from the CubaOne Foundation, an organization of young Cuban-Americans who are building bridges to their families and younger Cubans on the island. They pointed out that the ‘better deal’ with Cuba that I promised you during the campaign ‘means advancing US interests and improving the quality of life of the Cuban people, not returning to Cold War policies.’”

“I hate to say it folks, but this policy of positive engagement really, really looks like a winner, absolutely, 100 percent! That old policy of aggressive hostility? It’s lame…such a loser.”

Why US-Cuba Normalization Is Accelerating

What Do Cubans Think of Normalization With the United States?

Of course, Donald Trump will say none of the above, since he is not, to use a political-science phrase, a “rational actor.” Instead, the president plans to use the bully pulpit of the presidency to discredit the Obama policy of positive engagement, denounce the Castro government, and demand that Cuba take specific actions as a quid pro quo for improved relations. In a sure-to-be-futile attempt to coerce Cuba, Trump intends to announce new restrictions on the freedom of US citizens to visit the island, as well as on future commercial interaction.

The president’s new, eight-page executive order on Cuba, which Trump plans to sign in Miami tomorrow, will once again unleash US harassment of citizens traveling to the island, subjecting them to a Treasury Department “audit” of the purpose of their travel. US travelers will also be banned from staying at, eating at, or going to cultural events at most state-owned hotels. The new restrictions will effectively limit lodging options for hundreds of thousands of visitors, bringing a halt to the growth in the number of travelers who have taken advantage of the Obama administration’s open-door policy on travel to the island. The new directive also bans the ability of US companies to do business with any Cuban entity controlled by Gaesa, the conglomerate of tourism-related agencies administered by the Cuban military.

In both tone and substance, Trump’s new policy will undercut the Obama administration’s meticulous efforts to open a new era of civil and respectful bilateral relations between Washington and Havana. By resurrecting the decades of perpetual hostility that dominated the US approach to the Cuban revolution until December 17, 2014—the day Obama and Raúl Castro announced an agreement to reestablish diplomatic ties—Trump is set to sabotage a historic foreign-policy achievement that has indisputably advanced US national and international interests, and contributed significantly to major socioeconomic changes on the island.

Let’s be clear: There is no compelling logic to rolling back a strategic approach that has proven so successful, nor is there any real constituency for changing the policy. Poll after poll shows that about 75 percent of the American public supports the rapprochement with Cuba. That includes the Cuban-American community in Miami, which Trump will be addressing on Friday. Some 69 percent of Cuban-Americans support the diplomatic opening to Cuba, according to polling done by Florida International University; among younger Cuban-Americans, that figure rises to 87 percent. And 74 percent of the Cuban-American community favors full freedom of travel to Cuba—an unrestricted ability the community received in 2009, in one of President Obama’s first policy initiatives that Trump is now threatening to rescind.

Indeed, when it comes to the Cuban-American community, Trump’s decision to roll back the rapprochement appears to cater to only two members of the clique of hard-liners from Miami: Representative Mario Diaz-Balart, who has all but admitted to trading his vote on the American Healthcare Act for a Trump promise to roll back engagement with Cuba; and Senator Marco Rubio, who has parlayed his position as lead Trump protector on the Senate Intelligence Committee—yes, the very committee investigating the ongoing Trump/Russia scandal—into becoming the lead architect of the new, punitive policy. “I am confident that I will be very pleased with what the president will announce Friday,” Senator Rubio stated this week.

In Friday’s announcement, Trump will likely extoll his “Art of the Deal” philosophy, claiming that he—unlike many of his predecessors, who also issued demands and used coercion in their approaches to Cuba—can force the Cubans to capitulate. During the campaign, Trump repeatedly accused Obama of making a “bad deal” and conceding too much to the Castros. “If Cuba is unwilling to make a better deal for the Cuban people, the Cuban/American people and the US as a whole,” Trump declared three weeks after the election, “I will terminate the deal.”

But it is a major myth, as American University professor William LeoGrande has cogently argued, that the Obama administration did not significantly advance US interests in the accord to improve relations. Consider the positive dividends of normalization thus far:

These accomplishments were made possible by President Obama’s decision to abandon Washington’s imperial approach toward Cuba—a failed approach that Trump is about to renew. By adopting a noncoercive, civil, respectful tone in both open and secret talks with the Cubans before December 2014, Obama opened the door to normalized relations that are advancing both US interests and those of Cubans on the island who see, and are seizing, the opportunities for change that positive engagement offers.

As the Obama administration predicted, the expansion of tourism, and the expanding presence of US businesses on the island, have also advanced socioeconomic change in Cuba. Raúl Castro had already moved to create a private sector before the accord with the United States, but the influx of tourist dollars and US economic interests has contributed to the rapid growth of private Cuban entrepreneurship, which now incorporates almost a third of the island’s work force. “Millions of Cubans have benefited from this private sector growth, including higher wages, better quality products and services, innovation, and the ability to dream about the future,” the 55 Cuban businesswomen wrote to Ivanka Trump this week. “Undoubtedly,” they added, “the restoration of relations between Cuba and the United States has been key to the success of the private sector,” with many businesses supported by “increased U.S. visits, improved telecommunications and the introduction of new U.S. products and services.” But a setback in relations, they wrote to Ms. Trump, “would bring with it the fall of many of our businesses and with this, the suffering of all those families that depend on them.”

In less than three years, US engagement with the emerging private sector has done more to help transform Cuban society than five decades of paramilitary interventions, assassination plots, democracy-promotion programs, and trade embargos. Indeed, economic independence from the state—and the daily individual freedoms it allows—represents a substantive advance for the human rights of tens of thousands of Cubans. Further normalization of relations has the potential to significantly expand the number of Cubans who can determine their own economic futures, and free their lives from state control.

That is one reason that both Amnesty International and Human Rights Watch oppose Trump’s effort to justify his rollback policy in the name of human rights—a cause he appears not to give a damn about in other countries such as the Philippines, Saudi Arabia, or Russia. “The fact that Obama’s approach hasn’t led to political reform in Cuba after just a few years isn’t reason to return to a policy that proved a costly failure over many decades,” points out Daniel Wilkinson of Human Rights Watch. “The previous administration was right to reject a policy that hurt ordinary Cubans and did nothing to advance human rights.” According to Amnesty International, “More travel, more communications access, and more dialogue with Cuba are the way forward for human rights in Cuba.”

Both Amnesty International and Human Rights Watch have called on Trump to continue the process of normalization, and even to lift the embargo as a way of removing the threat of US aggression, which reinforces the hard-liners in Cuba’s Communist Party leadership. In a logical world, that is what Trump would do. He would acknowledge the model of foreign-policy civility that his predecessor established, and then take credit for expanding its successful contribution to both US interests and the interests of the Cuban people. That approach, however, would require a rational actor. Unfortunately for the future of US-Cuba relations, that is something Trump will never be.