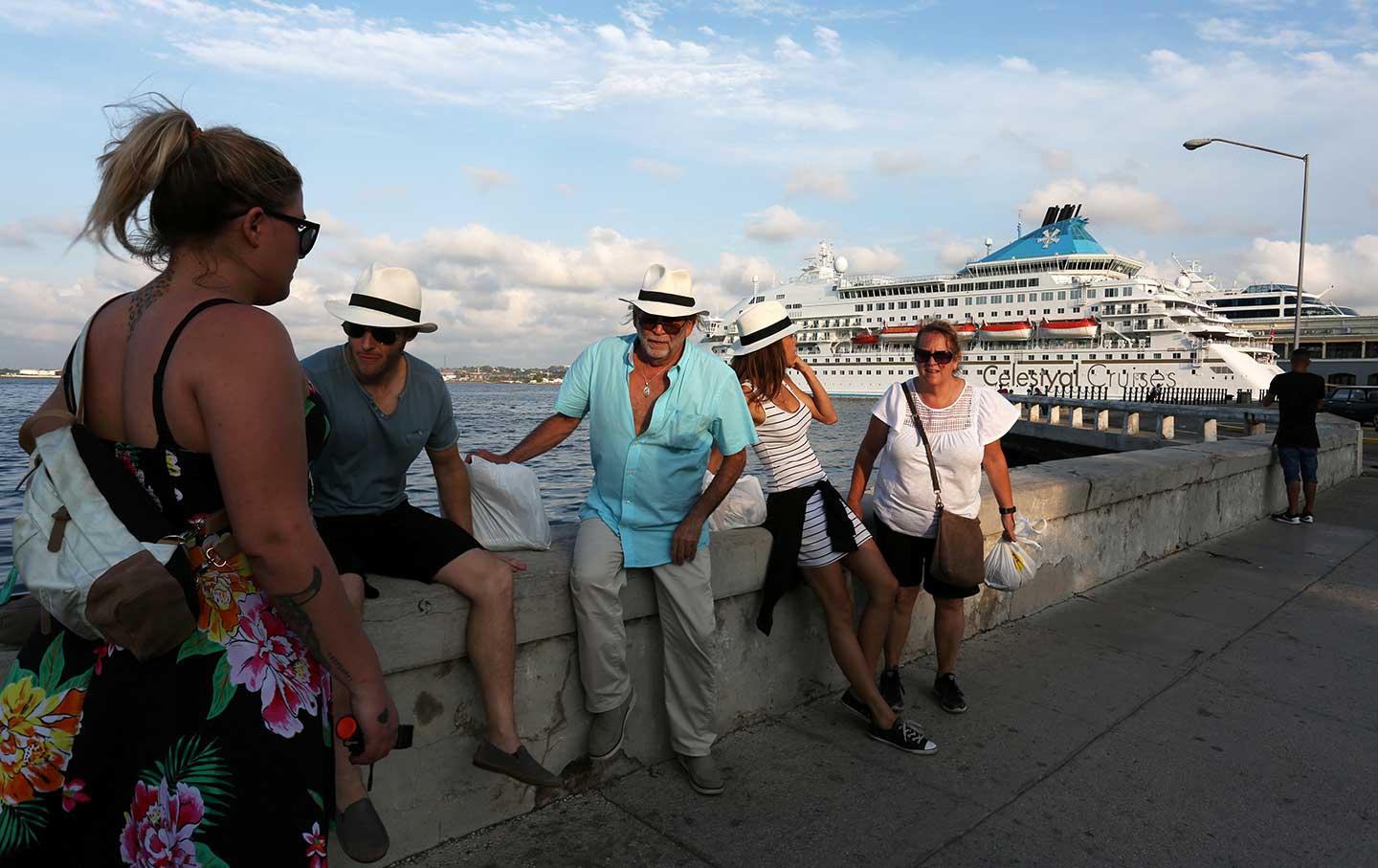 At mid-day on May 29, the conservative media website The Daily Caller posted an “exclusive” story titled “Trump Set To Roll Back Obama’s Cuba Policies.” The article stated that the president was planning a June trip to Miami, where he would reimpose restrictions on the right of US citizens to travel to Cuba, as well as curtail business opportunities that Obama had authorized through executive decree. The Daily Caller credited Trump’s decision “to the behind-the-scenes efforts of Republican Florida Sen. Marco Rubio, Democratic New Jersey Sen. Bob Menendez and Republican Florida Rep. Mario Diaz-Balart”—the trio of hard-line Cuban-American legislators who have pressed the president to rescind Obama’s history-changing policy of engagement toward Cuba.

The article immediately ricocheted around the Internet, was forwarded by CNN and picked up by a number of media outlets. Within 24 hours, other journalists began consulting their sources inside the Trump administration and publishing more comprehensive stories. On May 31, The Hill posted a detailed article on the internal debate within the foreign-policy bureaucracy on how much to alter a policy that has yielded clear benefits for US economic and security interests in the Caribbean and a new era of collaboration between Washington and Havana on key issues of mutual importance such as counternarcotics, counterterrorism, and migration. The New York Times followed up with a front-page report that “a split has emerged over rolling back a policy that many senior officials privately agree has been an improvement on the Cold War dynamic that shaped relations with Cuba in the past.”

The information in the original Daily Caller story did not leak from inside the Trump administration. Rather, the story was sourced to “an anti-embargo group.” An astute advocate of engagement, it appears, decided to sound a political fire alarm on Trump’s pending plans for Cuba, rather than sit by as a clique of right-wing Cuban-American legislators influenced the new administration to torch a successful policy.

Indeed, with the spate of news reports, the Cuba advocacy community—now made up of travel agencies, airline corporations, tech companies, agricultural interests and a growing number of politicians and political activists, among others—is mobilizing to defend recently expanded US-Cuba relations. “Cuba policy should not be determined by several hard-line Cuban-American legislators from South Florida,” points out Mavis Anderson, head of the Washington-based Latin America Working Group (LAWG), which is generating grassroots support to sustain engagement with Cuba. “Especially when the great majority of US citizens approve the changes President Obama made to Cuba policy, and want it to go further.”

LAWG was one of the first advocacy groups to push back against the Trump administration’s plans to roll back Cuba policy. “Its Now or Never: Stop Trump from reversing travel to Cuba!” reads a LAWG posting on May 30. The posting included an image to share on social media that states in bold letters i support engagement with cuba, and it calls for ending the travel ban and the embargo. In less than two days, it had been viewed over 37,500 times on Facebook, and had some 300 shares.

The LAWG posting also exhorted readers to contact members of Congress and urge them to demand continued travel and engagement with Cuba. After years of efforts by advocacy groups such as the Center for Democracy in the Americas and the Washington Office on Latin America to educate both Republican and Democratic members of the House and Senate about Cuban realities, Congress is finally emerging as a potential player on Cuba policy. Last week, in anticipation of Trump’s decision, a bipartisan group of senators reintroduced the Freedom to Travel to Cuba Act. When this bill was first introduced two years ago, it had only eight cosponsors; now it has 55—a reflection of how normalization, and the advocacy and lobbying interests it has unleashed, have dramatically changed the politics of the Cuba issue.

“Recognizing the inherent right of Americans to travel to Cuba isn’t a concession to dictators.” —GOP Sen. Jeff Flake

The legislation would lift remaining restrictions on travel and deprive Trump of his ability to interfere with the constitutional right of US citizens to visit whenever they want. “Recognizing the inherent right of Americans to travel to Cuba isn’t a concession to dictators,” stated Republican Senator Jeff Flake, who co-sponsored the bill with Vermont Democrat Patrick Leahy. “It is Americans who are penalized by our travel ban, not the Cuban government.”

Opinion polls show that some 81 percent of the American public supports free travel to Cuba, and that 74 percent of Cuban-Americans do as well. “The current travel restrictions,” notes the Cuban Study Group (CSG), a Miami-based Cuban-American association of business professionals, “have no parallel for any other country and are vestiges of over fifty years of failed policy. Rather than catalyze political or economic freedom on the island, they have only served to hurt the Cuban people in a misguided attempt to weaken their government.” Moreover, according to the CSG’s statement supporting the travel bill, “lifting the travel ban will have a substantial and positive effect on the lives of ordinary Cuban citizens who have joined the country’s nascent private sector.”

Last week, 46 travel agencies made a similar economic argument in a letter to Trump—one timed to support the introduction of the Freedom to Travel to Cuba Act. Organized by one of the leading travel providers, Cuba Educational Travel (which has helped coordinate The Nation’s Cuba trips), the signatories urged the new administration to consider the “benefits of increased travel to Cuba to both the American and Cuban private sectors,” and to continue the Obama-era relaxation of travel restrictions, which have led to a 73 percent increase in the number of US visitors to the island this year.

“Many US travelers visiting Cuba stay in privately run B&Bs, dine at private restaurants, hire independent taxis, and purchase goods and services from entrepreneurs,” the letter stated. And US jobs are also at stake. “Due to increased demand, our companies have brought on additional staff to handle the high volume of travel to Cuba,” the signatories noted. If travel to Cuba expands, the travel service providers will “hire more American workers,” according to the letter. But, the letter warned, “a rollback of the current policy would lead to significant layoffs at many of our companies.”

An “economic impact” analysis released yesterday by the leading US business lobby, Engage Cuba, attempts to quantify the significant employment and monetary costs of rolling back the policy. Based on average plane-ticket prices and cruise-ship fares, the study estimated that restrictions on travel could cost up to $3.5 billion in lost revenues and affect over 10,000 jobs in the travel industry over the next four years. Jobs and revenue streams in South Florida would be hardest hit, with loses of $212 million per year to the state economy, should Trump cut off cruise ship travel to the island. “Manufacturing companies are finalizing commercial contracts that will create $1.1 billion worth of exports from the U.S. to Cuba over the next five years,” according to the impact analysis. “Ending this process could diminish U.S. exports by $227.6 million per year, or $929 million over four years.” Ending those export deals in progress, the study predicts, would affect 1,359 jobs a year.

The Engage Cuba study is the latest salvo in the bitter battle to rescue Cuba policy, but it certainly won’t be the last. The stakes, as the pro-engagement advocacy community understands, go beyond job and investment losses; in both language and action, Trump is threatening to undermine years of concerted effort—inside and outside of government—to establish a civil, peaceful coexistence with an island neighbor after more than half a century of intervention, embargoes, and assassination plots. At stake is a model of responsible US foreign policy—to be emulated, not repudiated. “Now is not the time to backtrack,” Mavis Anderson told The Nation. “Now it is time to take our policy back.”