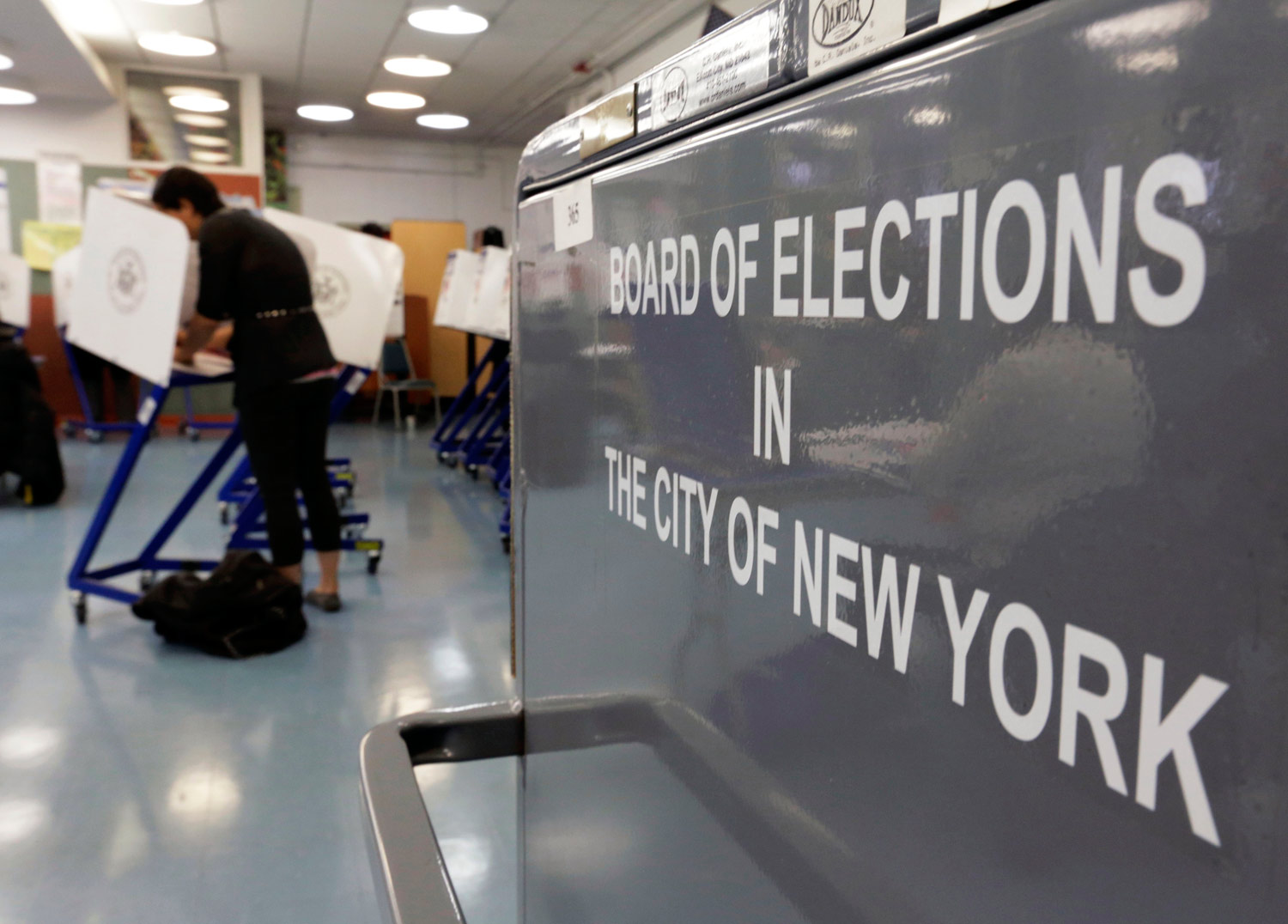 As the push for automatic voter registration (AVR) swept the country in 2016, New York City saw 200,000 voters illegally purged from its rolls. The same year that thousands of New Yorkers lost the franchise, Oregon, the first state to implement an AVR system, saw 44 percent of automatically registered voters cast a ballot. Oregon enacted AVR in 2015, allowing for its 2016 implementation, and since then fourteen more states, ranging from red to blue, have followed suit.

States that have implemented AVR have seen dramatic increases in registering eligible voters, leading them to have higher turnout rates. New York State, meanwhile, struggles with chronically low voter turnout, in part because it ranked 46th in the nation for registration in 2018. Earlier this year, the state made historic improvements to its voting laws, but more than 4.6 million eligible New Yorkers remain unregistered. Now, with the legislative session in swing, New York should take the next step in its voting-reform journey by passing and implementing automatic voter registration. The question before New York, however, is what kind of system it wants.
There are two main systems for AVR implementation: front-end and back-end. In a back-end system, such as Oregon’s, eligible voters are automatically added to the voter rolls when they interact with a government agency, like the DMV, and are given the chance to opt out via mail afterward. If they are already registered, their addresses are automatically updated when they move. In a front-end system, such as California’s or Colorado’s, individuals are required to decide whether they want to register to vote or indicate if they want to update their address while interacting with an agency.

While there are advantages to each approach, a front-end system does not register the maximum number of voters. New registrants may want to minimize the time they spend at a DMV or another government agency and decide they’ll take care of voter registration later, then never get around to it. Among those who are already registered, voters who change their address with the post office might mistakenly assume their registration will be updated too, only to find that it wasn’t when they go to vote. A more concerning barrier is the fact that DMV officials may choose to not register people of color, and this isn’t just a remote possibility: Cornell political scientist Jamila Michener found evidence that race was a key factor in determining compliance with section 7 of the 1993 National Voter Registration Act, which mandates that bureaucrat-run public assistance agencies (like SNAP and TANF) provide voter registration. Because they, too, are human-operated, front-end AVR systems are subject to the same potential biases.

The AVR debate is not merely academic or theoretical. Now that several states have implemented both front-end and back-end AVR systems, we have the data to understand the impact of each on a state’s elections.

As published in a new memo from AVR NOW (where I am the executive director), we found that Oregon’s back-end model has added far more individuals to the rolls, and far more efficiently, than its peers’ front-end systems. It also keeps voters’ information up-to-date and accurate, which its front-end counterpart does not.

As a point of contrast, Colorado implemented front-end AVR at its DMV in 2017 and registered only 30 percent of previously unregistered eligible voters. But in Colorado, the new secretary of state and legislators in both houses see Oregon’s success, and a bill that would shift the state to a back-end system for new registrations is now on the governor’s desk.

To be clear, a front-end AVR system is better than no AVR at all, and front-end systems have been successful at increasing their states’ electorates. In that light, AVR NOW recommends a hybrid system for New York in which agencies that collect enough information to provide back-end AVR reliably do so, while agencies that collect less information may use a front-end approach. We believe that, given the state’s infamous struggles with elections and voter registration, this model would allow New York’s AVR systems to enroll as many previously unregistered eligible voters as possible.

NYC Comptroller Scott Stringer, a longtime advocate for voting reform, supports the implementation of AVR in New York. “Nothing is more sacred to our democracy than the right to vote, but our electoral system has been broken for decades, and New York’s voter-turnout rates are unacceptably low,” he said. “It’s time for our leaders to take a bold step and enact automatic voter registration to revolutionize our voting system and bring New York into the 21st century.”

Beyond Stringer’s endorsement, we know that AVR is overwhelmingly popular with voters. Data for Progress/YouGov Blue polling showed strong support for AVR legislation among 2018 voters. In a survey, respondents were asked: “Would you support or oppose a policy where all eligible US citizens would be automatically registered to vote (unless they opt out) when applying for licenses and other IDs at DMVs, Medicaid offices, healthcare exchanges and other public agencies?” Nearly 60 percent of respondents said they would support such a system. 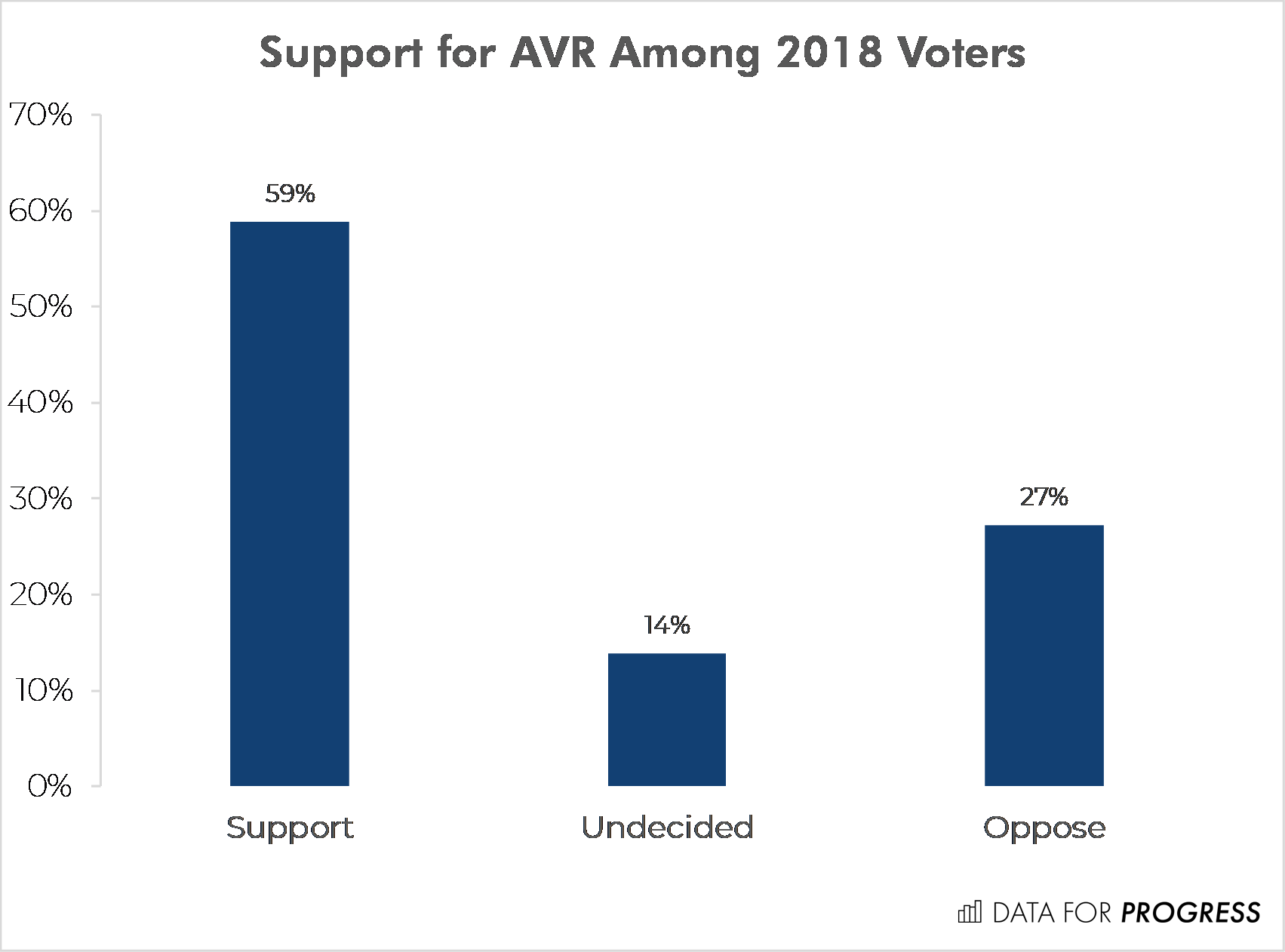 Building voter rolls that accurately reflect the population is not only better for the health of our democracy, but better for modern campaigns. Campaigns use voter files purchased from the state to figure out who they should target with Get Out the Vote (GOTV) and persuasion messaging. If voter rolls are missing coverage of certain groups (such as low-income voters, rural voters, and young voters) those people will not be targeted or mobilized for GOTV. Campaign contact is one of the most effective ways of increasing turnout, but campaigns can’t target voters they can’t see.

As we see automatic voter registration being considered in statehouses across the country, we must learn from the states that have already put the policy into action. New York has the opportunity to take these lessons and implement an automatic-voter-registration model that could reach the millions of eligible voters sitting on the sidelines of our democratic process.

“At a time where the right to vote is under siege in our country,” said Stringer, “we have an opportunity to make our voices heard.”

The state should seize this opportunity and put into place a robust AVR system to complement the other pro-democracy reforms advanced this year. If it does, New York will at last be able to claim its role as a leader in building a democracy that works for everyone.