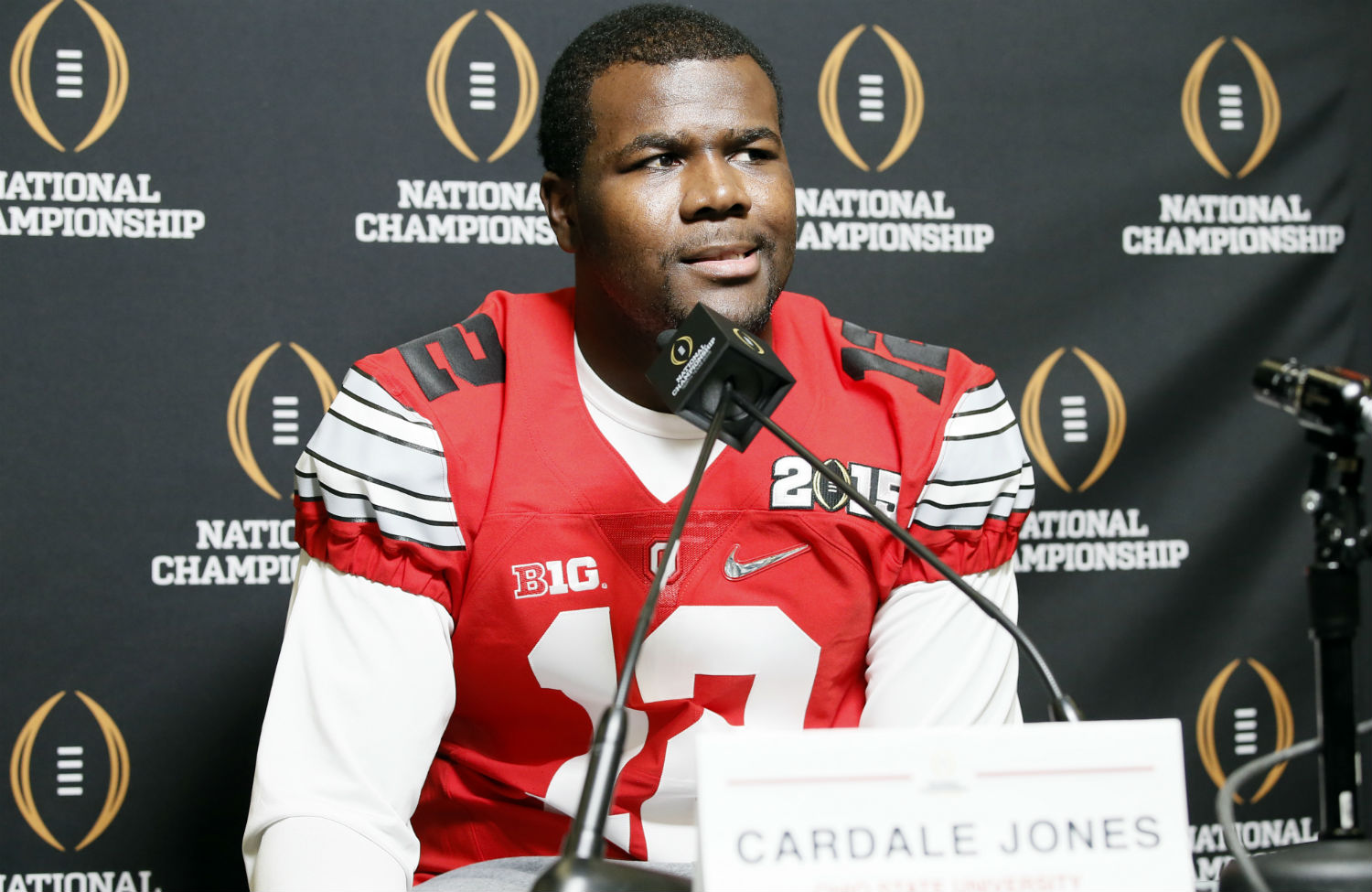 You really couldn’t have a more appropriate starting quarterback in the first college football championship game than Ohio State’s Cardale Jones. For a “playoff system” that critics say is a lucrative money-grab serving to extend the season, pull players away from even the pretense of going to class and further establish Division I colleges as football factories, Jones is perfect. The third-string quarterback with a tight end’s build and rocket arm, made news in 2012 when he tweeted, “Why should we have to go to class if we came here to play FOOTBALL, we ain’t come to play SCHOOL, classes are POINTLESS.” For his trouble, Jones had to deactivate his twitter account and was benched by his $4.5 million-per-year coach Urban Meyer the following week with what the Toledo Blade described as “DNP-tweet.” But his words were just a casual observation that the emperor happened to be naked.

It’s not just about the ways the players are getting cheated out of a check. At this point, if you can’t see that having unpaid student athletes undertake a grueling five-month travel schedule, score top TV ratings and support an infrastructure of multimillionaire coaches and media members is just a tad unjust, then you’re choosing not to see it. But less discussed is also the way running a football factory skews reality across the campus. Administrators—with dreams of massive alumni gifts, sparkling new stadiums and fully stocked luxury boxes on the brain—treat students like going thousands of dollars into debt for an education is a small price to pay to go to a school with a rockin’ football team.

A professor at Ohio State forwarded me an e-mail sent to all faculty from school provost Joseph Steinmetz that read, “As you know, next Monday Ohio State will face the University of Oregon in the first-ever College Football Playoff National Championship. This is an exciting moment in the life of our university community—one that happens to coincide with the first day of spring semester. I want to remind you that on January 12, Ohio State will operate as it normally does. Absences by students choosing to attend the game are not excused absences. That said, I hope instructors will use their best judgment and take into account that this historic match-up falls on the same day as the first day of class.”

This happened as vice provost Wayne Carlson sent a public letter to students warning them to not miss classes for the game. The letter was leaked to the press and provoked the following misleading headline from USA Today, “Ohio State warns students skipping school for championship risk getting cut from class.” So the faculty gets one message, while for the purpose of public relations, another message goes public

According to the professor who sent me the e-mail, this is the only time we see messages about leniency for wayward students. He said, “Do administrators send campus letters when Black kids are gunned down, asking profs to be lenient to traumatized students? Or when sexual assault cases are reported? No. This is what they care about and what drives the university. It’s embarrassing and disturbing.”

In addition, The Columbus Dispatch reported this week that “Ohio State University spent about $372,000 to send university leaders, faculty, friends and student leaders” to their Sugar Bowl “semi-final” game last week. In addition to the team, the cheerleaders and the band, the school sent a sixty-nine-member “official party” and another fifty-five people, all who travelled on the school’s dime. While the school is sending its people around the country to cheer the team, the school has seen fee-hikes for out-of-state students, while enacting cuts in the arts and humanities budget. (Oregon is not immune to any of this, having spent just under $250,000 over the last two games sending fifty “UO administrators, recruiters, fundraisers and some spouses and partners” to the championship game.)

A member of the campus community said to me, “I want the Buckeyes to kick Oregon’s ass because I’m a sports fan. I love this team so much and have loved seeing them come into their own. But watching this game for me means shutting out the reality that makes the world of big time college football what it is.”

This is what he calls “the paradox of the thinking college sports fan.” Success only encourages the school to further devalue education and assume that the glory of football will provide financial windfalls that will make everyone believe that the ends justified the means, and it’s difficult to think of a worse lesson that could be taught. Once again, this is not an Ohio State issue. Their rival Michigan just dropped a record $48 million to secure the services of new football coach Jim Harbaugh. This was done the same week that Michigan Governor Rick Snyder signed a law banning college athletic unions. At Oregon, Nike CEO Phil Knight has poured an estimated $300 million into the athletic department while the rest of the campus has buckled under budget cuts and furloughs. In addition, Knight gets to further brand Oregon as “Nike University” while receiving massive tax breaks for this “philanthropy.” This is less philanthropy than money laundering through sports and using the shield of amateurism to score both tax breaks and swoosh enhancement. Then, with every win by the Ducks, the Phil Knight approach, with the courting of their own Phil Knights by administrators, becomes the law of the land.

Increasingly, this system has been identified as corrupt, hypocritical and in need of change. But in the face of union drives, lawsuits and a barrage of criticism, a group of powerful people are fighting like hell to save the sclerotic mutation of a golden goose that is amateur athletics. College sports could be openly professionalized, regulated and made fair, but there’s no money in fairness. In the end, the relationship between big-time sports, universities, the media and the public is about as cozy, corrupt and cringe-inducing as a Jerry Jones/Chris Christie hug. Cardale Jones was right in 2012. But now everyone, from administrators on down, is “playing school” for the benefit of big-time football. But as Jones learned, in the real world just saying the emperor is naked doesn’t make people recoil in horror. Often they just turn up the volume on what an attractive nude trendsetter he’s become, even if it means structuring your professional life, not to mention your personal dignity, around kissing the emperor’s pasty, powdered ass.