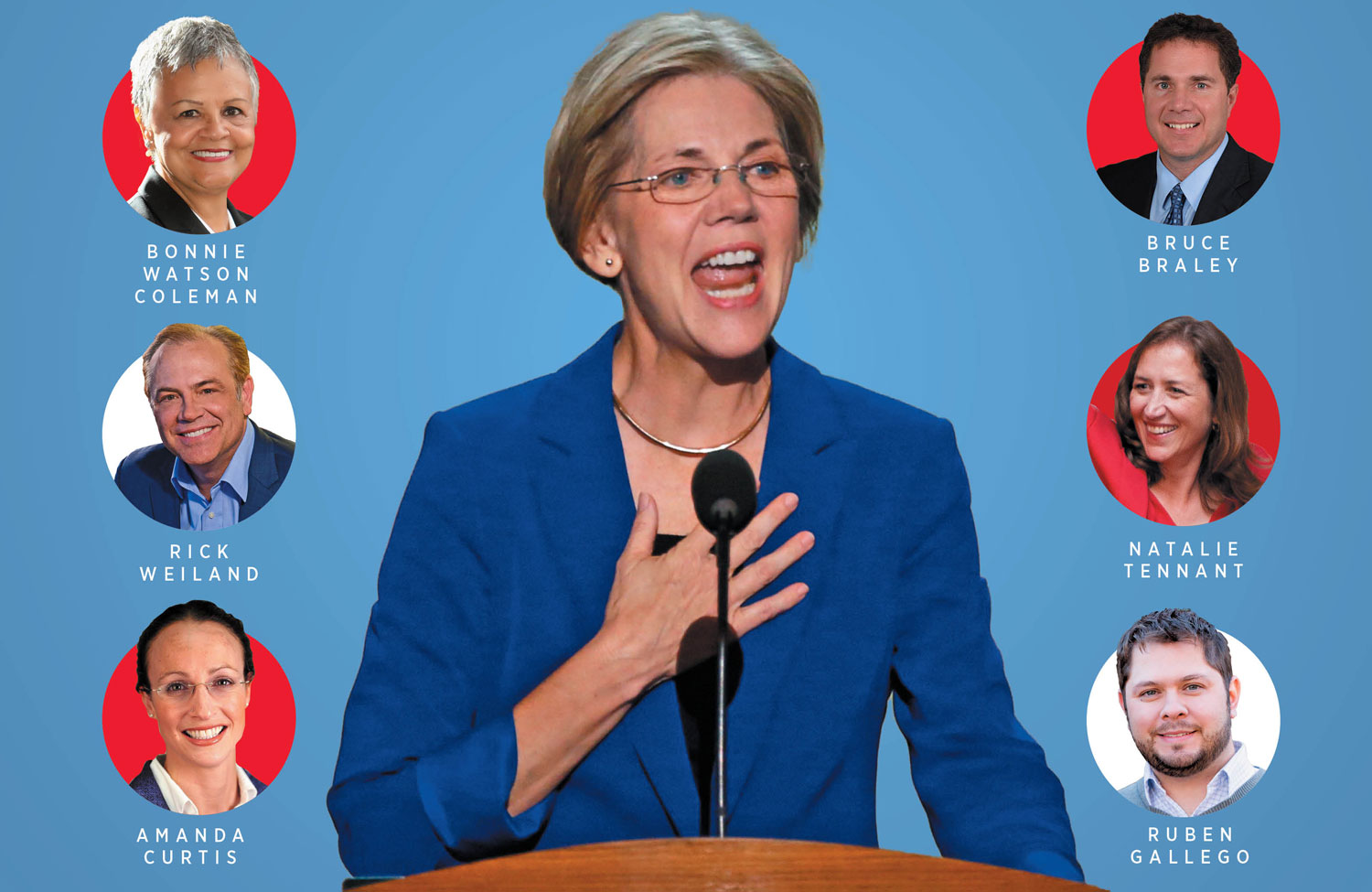 Suppose an insurgent movement with a sharp critique of Wall Street and a determination to end the Democratic Party’s compromises on core economic issues was taking shape across the country. Suppose the candidates associated with this movement were winning tough primaries and developing the outlines of a fifty-state strategy that rejects the self-interested calculations of party elites. Would that count as big news? Not yet, perhaps, since most mainstream pundits are still obsessed with the wrangling over which extremes the Republican Party will embrace. But while GOP insiders were busy beating back their Tea Party wing, the progressive populist tendency within the Democratic Party was going from strength to strength.

This developing movement, now often referred to as “the Elizabeth Warren wing of the Democratic Party” (a variation on the late Senator Paul Wellstone’s declaration, “I’m from the Democratic wing of the Democratic Party”), is focused on many of the issues that Warren raised in her electrifying July speech at Netroots Nation, where she vowed to fight for wage hikes, fair trade, pay equity, affordable education, and ironclad protections for Social Security and Medicare. “This is a fight over economics, a fight over privilege, a fight over power,” the Massachusetts senator said. “But deep down, it is a fight over values. These…are progressive values. These are America’s values. And these are the values we are willing to fight for.”

Democratic Party elites—who dream of a return to the triangulating days of Bill Clinton, perhaps with another Clinton in the White House—still resist this kind of values-based politics. But the party’s base is yearning—and voting—for something bolder. Senator Bernie Sanders, the Vermont independent who, like his Massachusetts colleague, has been talked up as an alternative to Hillary Clinton in 2016, has taken an economic-populist message to every corner of the country—including the red states of the Deep South. “When you get outside the Beltway,” Sanders notes, “and when you get outside political gossip and speculation, what you find is massive frustration and anger at both the political and economic establishment.”

That sentiment has led to the rise of candidates like Bonnie Watson Coleman, a New Jersey legislator who won a hard-fought June primary with an economic-justice campaign that talked not about raising the minimum wage, but about the need for a living wage. Refusing to soft-pedal her determination to address “the gap between the wealthiest and [those] most in need,” Coleman says “the equivocation of Democrats has created confusion for people. People need to know what their choices are and why.”

On the same day that Coleman was winning her primary, Pat Murphy won in Iowa. Murphy’s labor-farm coalition beat out better-financed candidates with a pledge to oppose “any effort to privatize or cut Social Security,” including the “chained CPI” reduction in benefits entertained by President Obama. This pattern continued throughout the summer, with Wisconsin progressives like Rob Zerban and Kelly Westlund securing primary wins with blunt populist messages, such as Westlund’s assertion that “people—not dollars—ought to have the strongest voice in our government.” Late August saw Arizona Democrats nominate Ruben Gallego, who highlighted his family’s immigrant roots and his legislative work to expand Medicaid. Speaking of the social safety net, Gallego said, “There is no way it will be weakened on my watch.”

Many of these winning candidates identify as “bold progressives,” borrowing a phrase from the Progressive Change Campaign Committee. Along with groups like Democracy for America and Progressive Democrats of America, which have formed over the past decade to push the party to the left, the PCCC argues that Democrats can’t win by proposing to be kinder, gentler Republicans. While there’s a general acceptance that support for reproductive rights and marriage equality benefits Democratic candidates in much of the country, the PCCC argues that this appeal can be strengthened and expanded with economic-populist stances. The PCCC doesn’t just defend Social Security; it backs candidates like Coleman who propose to expand it. And when “Third Way” centrists grumble that Warren and her allies are engaging in a risky politics, the PCCC counters with polling numbers that show compromising on economic issues is the real risk, since it blurs the distinctions between the two parties.

Obama may have won the presidency with a promise of a “postpartisan” politics, but there’s broad agreement among progressive populists that governing majorities are built with bold and specific agendas—a notion that has fueled the most interesting Democratic Senate candidacies of 2014. Congressman Bruce Braley, the nominee for Iowa’s open Senate seat, formed a Populist Caucus in the House three years before Warren was elected to the Senate; his 2014 campaign highlights his commitment to collective-bargaining rights for labor, fair-trade policies and indexing minimum-wage increases to the rate of inflation. Braley also scorns “risky schemes that would turn Medicare into a voucher system and privatize Social Security.”

While most top Democrats are focused on a few high-profile Senate races, Warren and the progressive populists have gone deep, endorsing candidates like South Dakota’s Rick Weiland, a prairie populist who decries corporate power, declaring that “to feed their profits, we lose our jobs, our homes and our farms, our kids’ education, even our health, and the Congress they have bought looks the other way—or worse.” In July, Warren campaigned with West Virginia Senate candidate Natalie Tennant on the same day that Ryan campaigned in the state for Republican Shelley Moore Capito. The contrast was stark—which is exactly the point. While Ryan pitched his usual line of tax cuts for the rich and safety-net cuts for everyone else, Tennant declared that “turning Medicare into a voucher program or allowing Wall Street to gamble away our Social Security in the stock market should never be on the table.” As she did, the crowd chanted, “A vote for Main Street, not for Wall Street!”

That’s not just a counter to Ryan’s failed vision; it’s a cry from grassroots Democrats for a politics that is populist and progressive enough to excite new voters, build coalitions in unexpected places, and win—in 2014 and 2016.