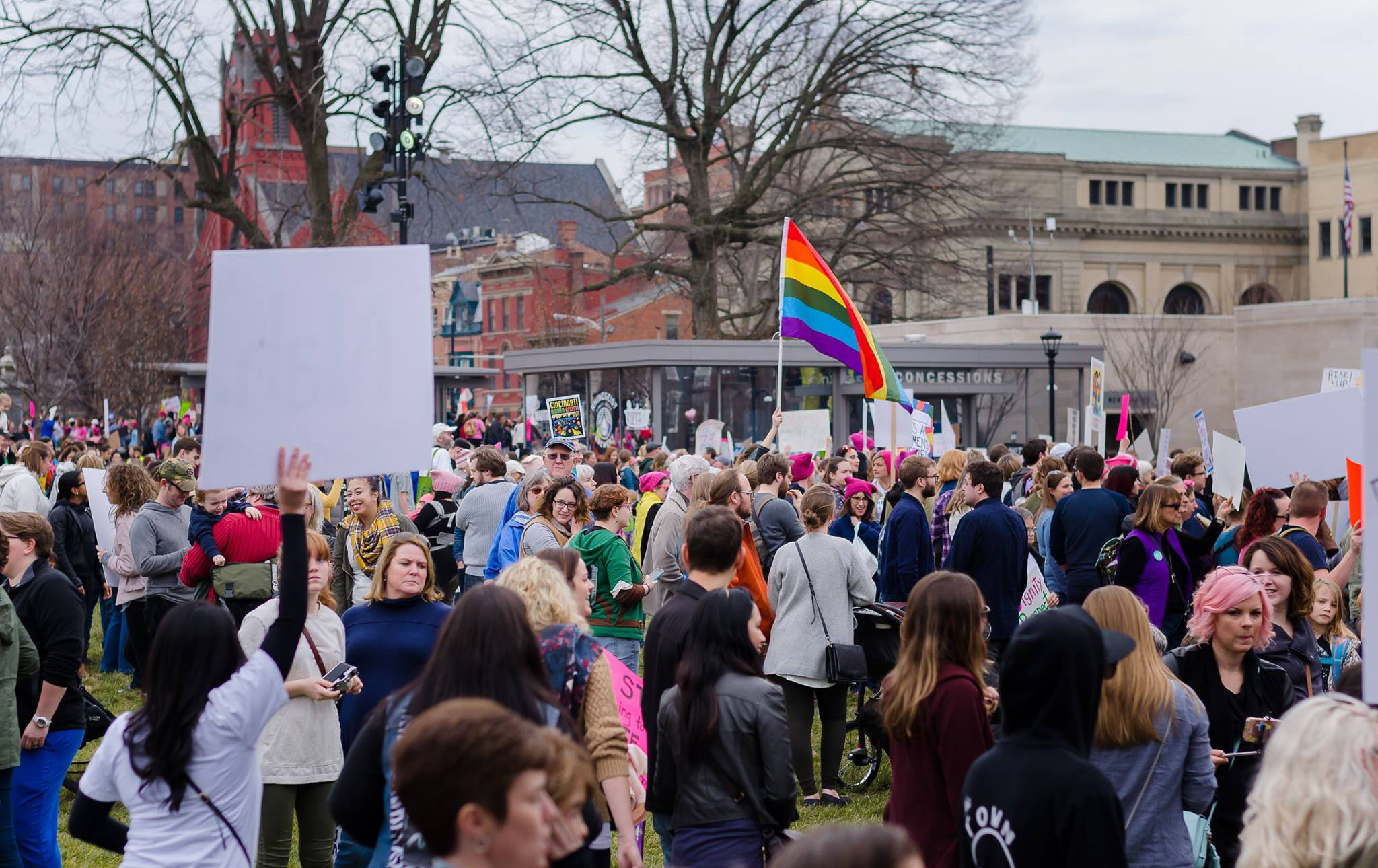 Thousands of protesters attended the Cincinnati Sister March in solidarity with the Women's March on Washington, January 21, 2017. (Jen Lake)

Thousands marched Saturday in the Sister March in Cincinnati, one of the few Democratic strongholds in a state that Trump carried with 51.3 percent of the vote. Estimates put the crowd that gathered in Over-the-Rhine’s Washington Park at 7,000, an impressive showing in this metro area of just over 2 million people. Speakers at a rally prior to the march addressed the crowd on behalf of Planned Parenthood, a local organization supporting survivors of gender-based violence, and the Islamic Center of Cincinnati and Black Lives Matter Cincinnati, among other groups. The event attracted participants who were concerned about a variety of issues, from preserving the Affordable Care Act to combating police violence and preserving a science-based approach to climate change at the federal level.

In the crowd I met Debbie Sims, who sat on a bench holding a sign that read “Hands Off My American Dream.” It featured a simple drawing of a house and a seal identifying her as a member of Communities United for Action, a local organizing project that focuses on abuses in foreclosures and payday loans. Sims said she’s worried that a Trump presidency will take us back a decade to the dark days of the last financial crisis. “I know a lot of people who, during the Bush administration, lost their homes, lost their jobs,” she told me. Sims is concerned about the concentration of power on the right, particularly as a resident of a state with a Republican governor. “With the Republicans taking over, we don’t have a leg to stand on,” she said, explaining what had drawn her to the march. “We have to fight. We can’t just let the poor not have a voice.”

The effects of reactionary federal policies may not have hit this city yet, but the cultural impact of the Trump victory has. This weekend, swastikas and racist and homophobic graffiti were painted around the campus of Withrow University High School, where the student body is 97 percent young people of color. The phrase “Fuck Niggers and Faggots” was painted on sidewalks, and other slurs and swastikas were painted on signs and benches alongside the president’s name. Earlier this month, a vandal painted a swastika on the sign of a local Jewish seminary, Hebrew Union College.

In Hamilton County, 52.7 percent of voters supported Hillary Clinton. It’s a slim margin that means most of those voters have neighbors and coworkers who support Trump. The counties that surround Cincinnati all went red: Clermont, Butler, and Warren County all went for Trump by more than 60 percent. Fran Carr and Pate Hutson live in Columbus but came to Cincinnati to march on Saturday with family. They are using Indivisible, an online resource compiled by former congressional staffers that explains how to best pressure elected officials, to figure out how to best organize with like-minded people. Carr also receives the Daily Action text, and said she makes a related phone call to legislators every day. But she said that of the many ways she commits herself to fighting the Trump administration, the hardest thing is engaging with friends who support him. “One of my friends believes there’s no such thing as white privilege. All of the examples I give, the ways that we enjoy white privilege, he just denies,” Carr said. “I keep finding a way for us to listen to each other. It’s exhausting, it’s nauseating and it’s necessary.”

Jasmine Grant, who is black, attended the noon rally, but as late as 11 am she was debating whether or not to show up. Grant was aware of the national conversation about whether the issues of women of color were being sidelined in the marches or else addressed hastily in a last-minute effort to respond to criticism. In the end, Grant opted to participate. “I equally share in the frustration that when we have these conversations [about feminism], sometimes it seems like women of color are missing from those conversations,” she told me. “But in order to have a voice, I need to be here.”

The question remains whether the energy displayed Saturday will carry over into other ongoing local struggles. For example, will the thousands who poured into downtown Cincinnati’s streets show up for issues that matter to those who care about police violence? Will they show up for the retrial of Ray Tensing, a white former University of Cincinnati police officer who killed Sam Dubose, an unarmed black man, during a traffic stop? That’s the question members of Black Lives Matter Cincinnati raised when I asked how the march connected to their work. The first trial ended in November in a hung jury.

“The event was politically amorphous,” Brian Taylor of BLM said of Saturday’s rally, at which fellow BLM organizer Ashley Harrington spoke. “The sentiment of the event is anti-Trump, but what people are for is yet to be seen.”

Photos by Dani McClain except where otherwise noted.