On April 7, former Brazilian president Luiz Inácio Lula da Silva stood before thousands of supporters in the São Paulo suburb of São Bernardo do Campo and, in an emotional, hourlong speech, announced that he would be turning himself in to begin a 12-year prison sentence for corruption.

Tears flowed. The crowed called for him to resist. Nineteen hours before, Lula had defied an order to turn himself in. Many of the thousands there had spent the past two days at the ABC Metalworkers Union building, where Lula was staying, ready to defend him.

Amid Crisis in Brazil, the Evangelical Bloc Emerges as a Political Power

Lula’s words marked the end of an era. From his time as the head of the union movement in the 1970s, through the birth of the Workers’ Party in 1980, the fall of the dictatorship, and Lula’s rise to the presidency, he had been the defining leader of the Brazilian left. Now he was going to jail.

He told his supports that though he could be locked up, his ideas would live on and grow with them. That he would be transformed into millions.

“There is no point in thinking that I can be stopped,” he told the crowd. “I will not stop, because I’m not a human being, I’m an idea, an idea that is mixed with all of your ideas.”

He closed his speech with a nod to the next generation: 36-year-olds Manuela d’Ávila and Guilherme Boulos, the pre-presidential candidates for, respectively, the Brazilian Communist Party and the Socialism and Liberty Party, a group that was formed when it broke with the PT in 2004.

The day after Lula’s imprisonment, one bus arrived, then 10 more. They came from across Paraná and the neighboring states, carrying hundreds of supporters.

“I am Lula,” chanted the crowd in spontaneous eruptions that ignited throughout the day.

Nine hours later, Lula was on a helicopter, spinning toward the federal police headquarters in Curitiba.

Fireworks crackled. Cars honked. His opponents celebrated, while the police fired stun grenades and rubber bullets into a pro-Lula demonstration just outside the prison gates, in a not-so-subtle metaphor for the state of the country.

For the Brazilian right, Lula’s jailing was checkmate. Game over.

The day after Lula’s imprisonment, one bus arrived to within a few blocks of the prison where Lula was being held, then another, then 10 more. They came from across Paraná and the neighboring states, carrying hundreds of supporters. People filed off, bags and bedding in hand, guitars slung over shoulders. Red shirts. Chants on their lips. Fire in their eyes.

“We are not leaving here until Lula is free.” —Gleisi Hoffmann, Workers’ Party president

By the early afternoon, dozens of tents lined the grass along the roadsides there, in the middle-class residential neighborhood of Santa Candida. Residents kept their gates closed and their curtains drawn, trying to ignore the growing mass of people just outside, and the round-the-clock chants, cheers, music, and speeches.

“We are not leaving here until Lula is free,” PT president and Paraná senator Gleisi Hoffmann told hundreds of supporters, the prison in the distance just beyond them, behind a row of shock troops—arms resting on their Plexiglas shields. “We don’t want to be here and we wouldn’t need to be here, if there was serious justice in the country.”

“Occupy and resist!” Shouted the crowd.

Hoffmann had made the call for the occupation from São Bernardo do Campo moments after Lula announced he would be turning himself in.

But if São Bernardo do Campo was the heart and soul of the Brazilian working-class, Curitiba was its antithesis—perhaps the most unlikely place for a popular mass movement in Brazil. It’s been called “the Republic of Curitiba.” The capital of Paraná, one of the most conservative states in the country, it’s the home of Judge Sergio Moro, who has been leading the investigations into the Lava Jato (Operation Car Wash) corruption scandal, which has already taken down dozens of politicians.

Nevertheless, the Curitiba camp has become ground zero for organizing across Brazil, and it is invigorating a left that has been fighting an uphill battle since before the 2016 impeachment of president Dilma Rousseff.

Each day, more people arrive: students from Florianópolis, workers from São Paulo, women from Minas Gerais. The PT says it has even transferred its national offices to Curitiba.

These are not just card-carrying Workers’ Party members. They come from the country’s largest labor federation, the CUT; social movements; the Homeless Workers’ Movement (MTST); the Landless Workers’ Movement (MST); and the People Without Fear and Popular Brazil Front, grassroots coalitions that have been key in organizing the resistance in recent years.

A steady stream of humanity runs for blocks. Around-the-clock mobilizations. Hourly speeches and performances. The port-o-potties are overflowing, but everyone has a place to sleep. Meals are provided by MST collectives, who are used to cooking for hundreds. And despite Lula’s imprisonment, there is a sense of hope.

There are comparisons to be made with Occupy Wall Street. But many apparent similarities are false cognates, lost in translation. Where OWS was a rebellion against the 1 percent, and with it a cacophony of issues and platforms, this occupation, and the protests and marches happening in tandem around the country, have one clear political goal—Free Lula. Brazilians have also been occupying public and private spaces for years. The MST alone has settled 350,000 families on millions of hectares of farmland, acquired through countless occupations across the country over the past three decades.

Luciana Alfonso sits on the edge of the luggage compartment on the bus she traveled in from her home near Cascavel, on the other side of the state of Paraná. She is a soft-spoken 34-year-old mother of three, wearing a red hat with an MST logo. She’s sipping on the South American tea mate, in a large gourd. She’s been camped in an MST occupation for nearly four years, to demand her own piece of land, but she and her neighbors decided overnight to travel to Curitiba. 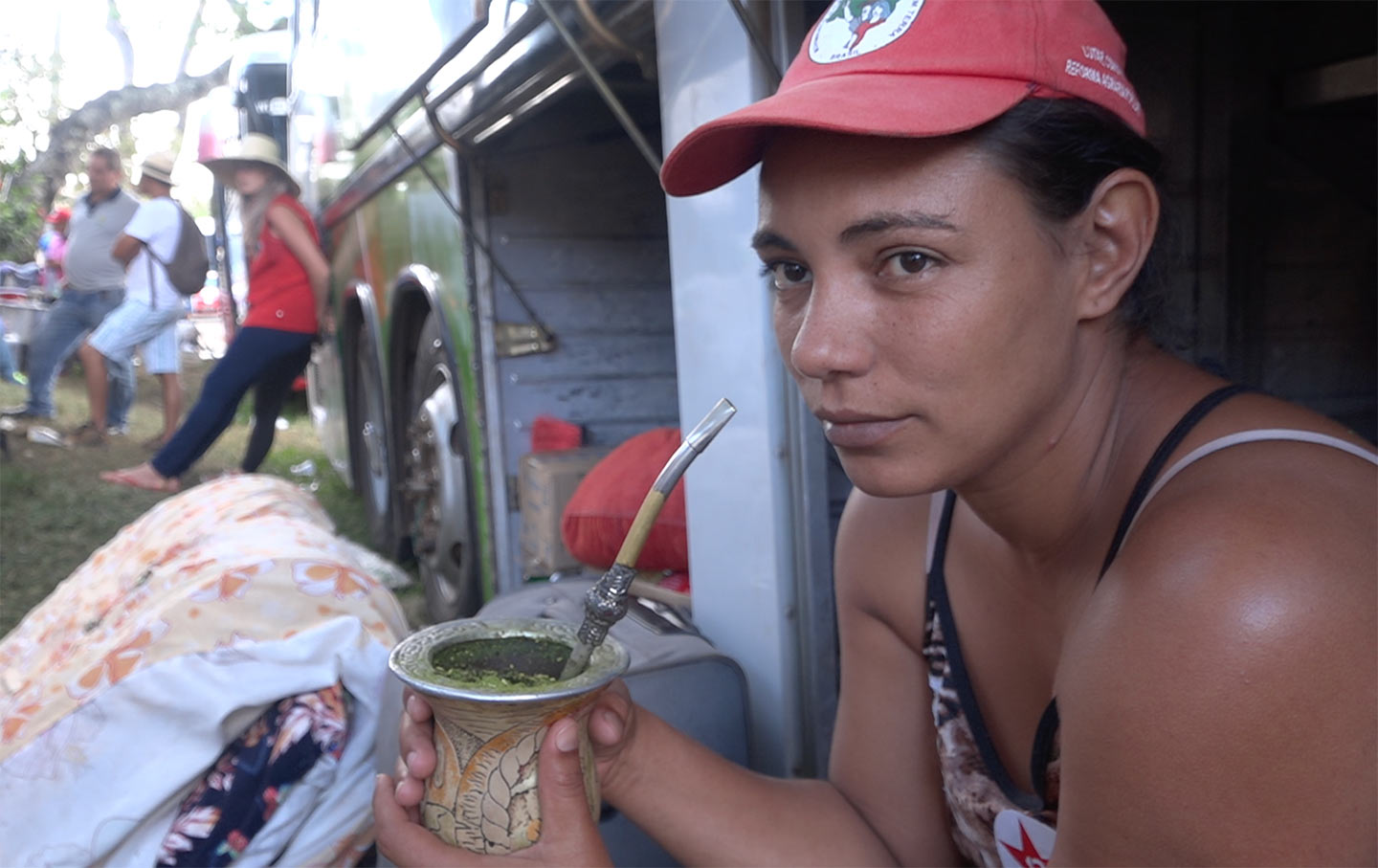 “I came to support Lula,” says Alfonso. “Because if he stays in jail, we are screwed, those of us that live in the countryside and work the land in order to survive.”

The significance of Lula’s imprisonment cannot be understated. The former president left office in 2011 with an 87 percent approval rating. During his two terms, he introduced affirmative-action policies at universities, increased funding for health and education, and helped to pull 30 million people out of poverty. But he was never accepted by Brazil’s elites. His successor, Dilma Rousseff, was ousted in 2016 for “budgetary maneuvers” by an overwhelmingly corrupt congress, in what many called a congressional coup.

The incoming government of Michel Temer—itself embroiled in myriad corruption scandals—has churned out a wave of austerity that has washed over the country. With the help of the most conservative congress in recent memory, the Temer administration has pushed through a 20-year spending freeze, legislation facilitating the outsourcing of jobs, and a labor reform gutting workers’ rights. It has privatized several ports, airports, and roads, opened up offshore oil reserves to foreign companies, and rolled back funding for social programs and policies catering to Brazil’s working poor.

Lula’s supporters and many international observers see his conviction and imprisonment—for allegedly accepting a beachside apartment from a company seeking government contracts—as a political tool to remove him from October’s elections, and with him, the chances of the left returning to power.

“If Lula is the candidate, workers have the possibility of rolling back all of the terrible reforms that the Temer government has enacted in recent years,” says Anna Julia Rodrigues, Santa Catarina state president of the CUT. “If Lula is not the candidate and he is convicted like the right has prescribed.… First, it’s the end of our democracy—the democratic state, with the rule of law—and with that, rights will continue to be ripped from the Brazilian people.”

With 31 percent approval even in the most conservative recent poll, by Datafolha, Lula is still well ahead of the pack for this year’s presidential elections, despite his imprisonment. But if he can’t run, it could open the door for several center-right candidates, in particular the Trump-like Jair Bolsonaro, who is polling second, after Lula, with 15 percent.

Bolsonaro is a former military captain who carries a gun, has been accused of sexual harassment and fined for racist and homophobic comments like saying he would rather have his son die in an accident than be gay. If Lula is out, some analysts envision a France-like scenario, where the Brazilian left could be forced to vote for a right-leaning, Macron-style neoliberal rather than see Bolsonaro come to power.

There is also Marina Silva. She’s the former PT environment minister who is polling in third place, with 10 percent. But her politics—environmental, evangelical, anti-abortion—are too contradictory for most on the left.

Lula can’t be written off yet. Despite jail, the Workers’ Party insists he is their man. His lawyers are still expected to appeal his case to each of the country’s two Supreme Courts. Another case is to be heard in the coming weeks that could, if it goes his way, see him freed while he finishes those appeals.

Even if he gets a break, however, Lula may be barred from running (because of “clean slate” rules in Brazil, candidates convicted of corruption and other crimes are barred from holding office for eight years). The country’s top electoral court is expected to rule on his candidacy in September.

And so the occupation continues, albeit with setbacks. Under the threat of a $150,000 daily fine, organizers agreed to move the bulk of the overnight camp to a location nearby on April 17. At night they still maintain several tents and an around-the-clock vigil blocks from the prison. During the day, hundreds are back, drums in hand, their voices carrying to the prison walls, where Lula has said he hears them each day.

Lula’s supporters say they’re not going anywhere. They are doubling down on the grassroots organizing in Curitiba and around the country. And they see their current role as historic—pushing back on Lula’s imprisonment, which only half the country supports, and planting seeds for the future.

“Instead of killing Lula they are transforming him into a mythic figure that will occupy an ever more prominent place in the country’s history,” said PT Senator Lindbergh Farias on the first day of the Curitiba occupation. “The next 30 or 40 years in the people’s working-class struggle will depend on this resistance here today.”

Correction: The text has been updated to say that Jair Bolsonaro is a former military captain, not general.