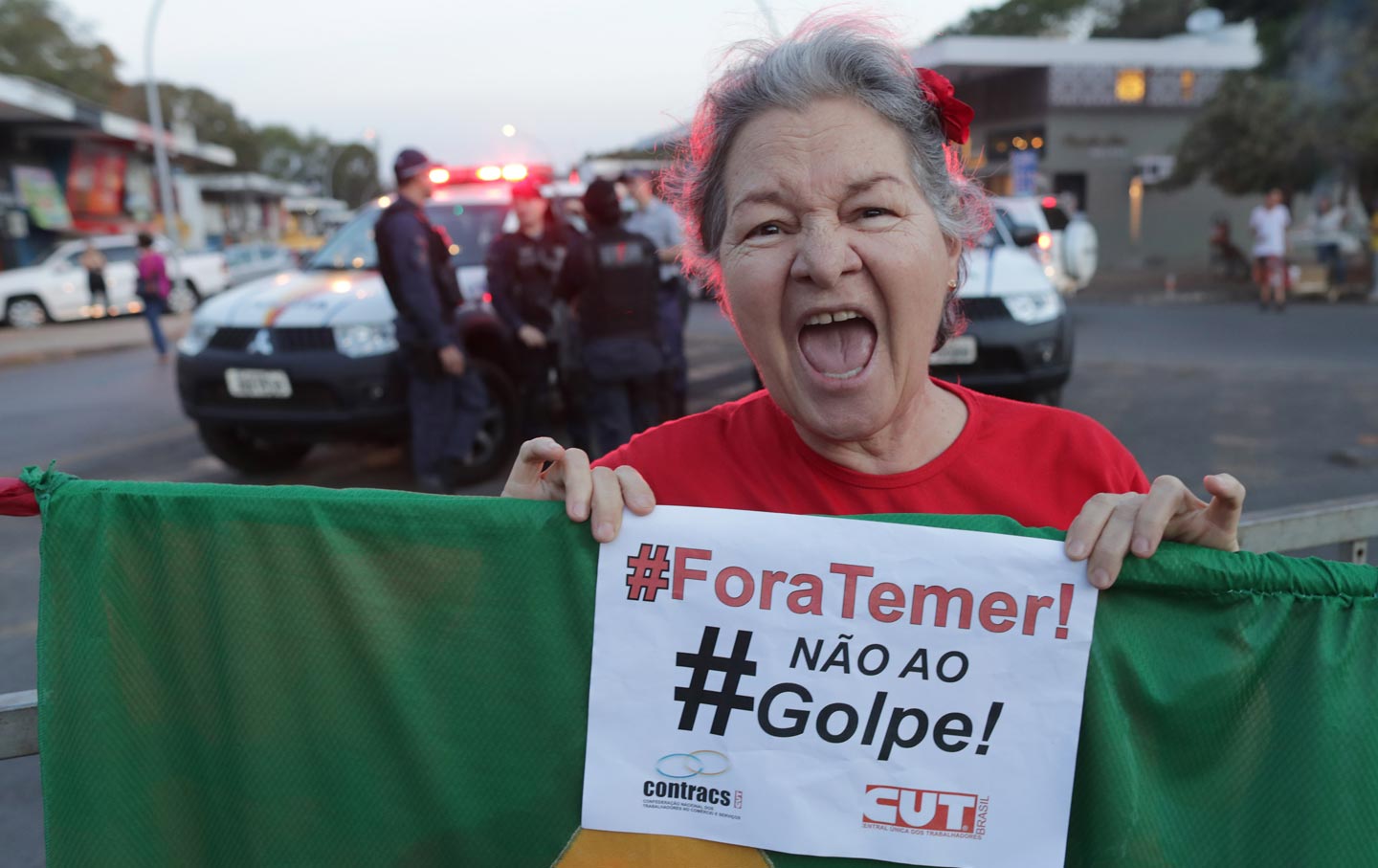 A woman holds a sign that reads in Portuguese “Temer Out, No to the Coup,” during a rally in support of suspended President Dilma Rousseff, Brasilia, Brazil, August 24, 2016. (AP Photo / Eraldo Peres)

Editor’s note: On August 31, Brazil’s Senate voted 61-20 to convict Rousseff on charges of manipulating the federal budget, thus ending 13 years of Workers’ Party rule and setting the stage for interim President Michel Temer to remain in office until 2018, the end of the current term.

On July 19 and 20, I served as a juror for the International Tribunal for Democracy in Brazil, held in Rio de Janeiro. The tribunal was modeled on the Russell Tribunal, also known as the International War Crimes Tribunal, that put US foreign policy and military intervention in Vietnam on trial in the 1960s.

The tribunal was organized by Via Campesina International, the Brazil Popular Front, and the Brazilian Jurists Front for Democracy, and was supported by several academic and grassroots organizations, such as the Landless Workers Movement (MST).

Only a few of the pro-impeachment deputies gave as their reason the “crimes” for which Rousseff was being impeached.

The social movements in Brazil invited me and eight other jurors from various European and Latin American countries to analyze and render a judgment on what they described as a “break in the democratic process” and “a new type of coup.”

The tribunal was tasked with examining the impeachment of President Dilma Rousseff that was unleashed in Brazil’s Chamber of Deputies. This past April, the anti-Rousseff forces secured the simple majority vote necessary to begin the impeachment process, with each deputy required to state his or her reason for their vote for or against impeachment. Tellingly, hardly any of the pro-impeachment deputies gave as their reason the “crimes” for which Rousseff was being impeached.

The Senate recently voted to go forward with the impeachment. Sometime in the next few days, the Senate is set to hold a final vote on whether to permanently remove Rousseff from office and install former Vice President Michel Temer until the 2018 election.

The official reason for impeachment—that Rousseff improperly moved funds from a federal bank to cover cash-flow shortfalls in government programs (all the funds were repaid to the federal bank)—is a practice that Brazilian presidents have used in the past and is not a crime. Rousseff has not been accused of any personal enrichment or of being connected with Brazil’s widespread political corruption.

A recent report by the Public Prosecutor’s office found that Rousseff is not guilty of any crime.

Impeachment should require indisputable evidence of the commission of a crime by the president. As is clear from the wording of the Constitution, impeachable offenses are serious and are committed intentionally against legal interests directly linked to the structure of the Constitution and, consequently, the Brazilian state. The applicable law does not include budgetary accounting errors or funding shortfalls as impeachable crimes.

A recent report by the Public Prosecutor’s office found that Rousseff is not guilty of any crime. In contrast, many of the pro-coup deputies are under indictment for political corruption which has engulfed about 60 percent of the members of the lower house. Temer himself, for example, is accused of accepting 1.5 million reals (about $430,000) in bribes from a construction company doing business with the Brazilian oil giant Petrobras. A series of leaked wiretap recordings have also revealed that some of Rousseff’s main rivals conspired with the Supreme Court to oust her and stall the corruption investigations.

In the proceedings for the tribunal, several witnesses were called for both sides. One witness, Professor Marcia Tiburi, described the misogynistic attacks on Rousseff, including various sexist depictions of her and the implicit condoning by right-wing lawmakers of the rape that she suffered when, as a leftist guerrilla in the early 1970s, she was captured by the military dictatorship and tortured.

Still Selling Neoliberal Unicorns: The US Applauds the Coup in Brazil, Calls It Democracy

Brazil For Sale: How a Legal Coup Set the Stage for Privatization

Before Her Murder, Berta Cáceres Singled Out Hillary Clinton for Criticism

Another witnesses testified that allowing the impeachment to succeed will be disastrous for Brazil’s working class, as Temer and his all-white-male cabinet have quickly moved to cut social programs championed by Rousseff and her Workers’ Party.

Based on the extensive evidence presented to us, we found that what is happening in Brazil is a conspiracy against democracy. Impeachment is being used for partisan purposes to depose a democratically elected leftist president. This is, in effect, a coup, and those who engineered it are guilty of massive corruption and grave crimes, and must be held to account.

Our panel of international jurists also unanimously found that the removal of Rousseff from office “violates all the principles of the democratic process and Brazilian constitutional order.”

This coup is an attempt by Brazil’s elite to regain power through non-electoral means and re-implement the neoliberal agenda. As one witness reminded us, whether a democratically elected president can continue her term should not depend on whether the majority in Congress are members of her party.

The US government’s stance on the coup, effectively supporting it, must also be condemned. This is similar to its position on Paraguay and Honduras, when similarly process-based coups overthrew democratically elected governments that were acting against the interests of the US government.

The world has witnessed what transpired in post-coup Honduras, where the militarized brutality of the regime drove many to flee for their lives and seek refuge in the United States. Several activists have been murdered, including Berta Cáceres.

In 2013, I met with Cáceres, who was living underground even at that time and was on a death list because of her work. This indigenous and environmental-rights activist was murdered by forces allied with the regime, at least one of whom was trained US Special Forces. Several other members of her group have since also been murdered.

Our delegation in 2013 documented massive electoral fraud and intimidation during the elections. The US ambassador called them “a festival of democracy.”

As was stated several times during the tribunal in Brazil, the impact of the coup there would not be limited to that country but would reverberate across Latin America and beyond. This coup must be defeated. As Americans, we must hold our elected officials accountable for their stance and their actions in this crucial moment.