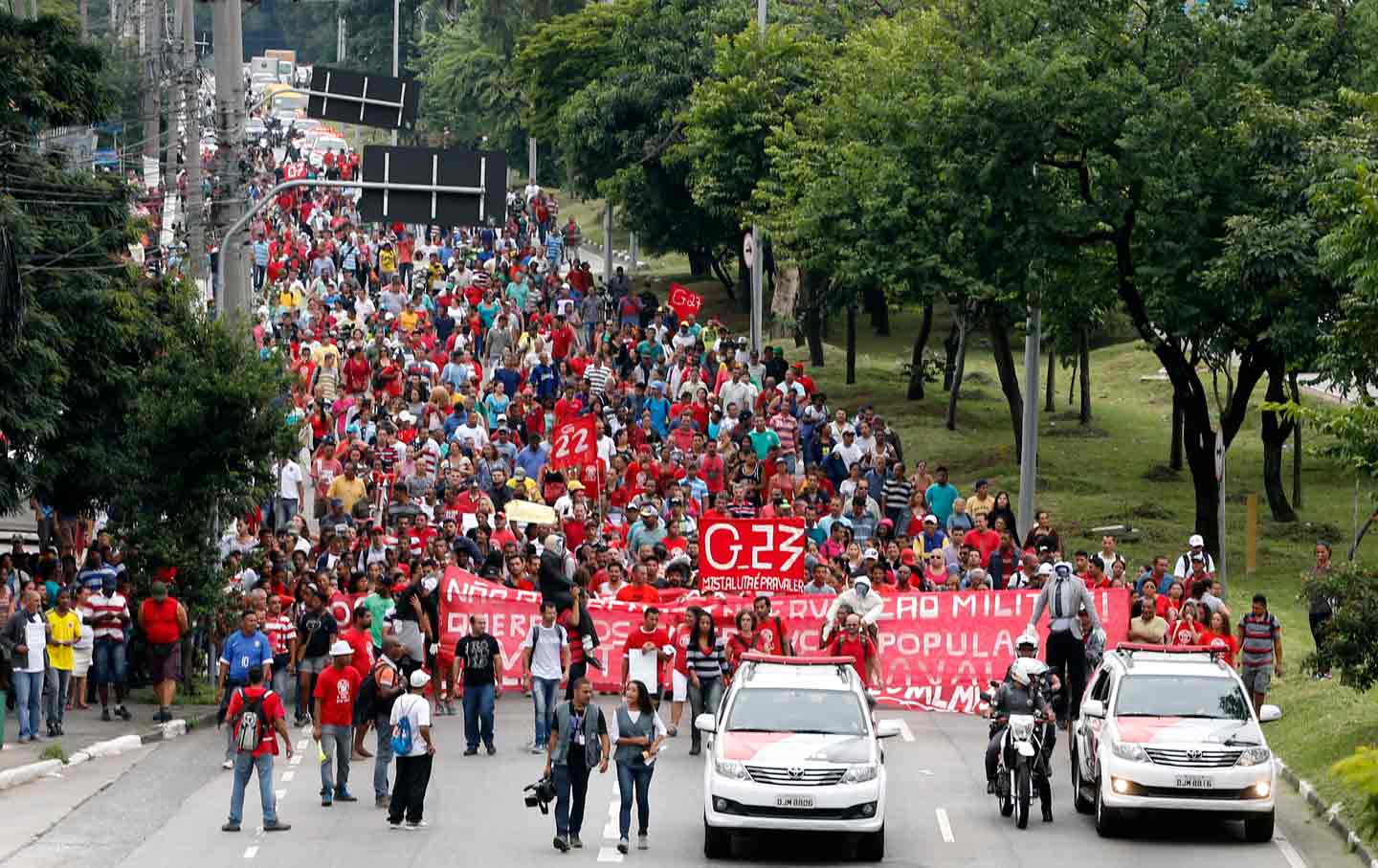 Members of the Homeless Workers’ Movement (MTST) march on a highway in São Paulo on March 18, 2015. (Reuters / Paulo Whitaker)

Guilherme Boulos is the leader of the homeless movement (MTST) in the megalopolis of São Paulo, a city with more than 20 million inhabitants. The homeless campaign, which has organized successful protests in defense of squatting in the city, plows a middle course between Workers’ Party (PT) loyalists and ultra-leftists who deny even the most obvious achievements of the Lula years. The movement has fought the anti-PT right (sometimes physically in the streets) while mobilizing the homeless against the austerity policies implemented by President Dilma Rousseff. Born in São Paulo in 1982, Boulos graduated with a degree in philosophy at the state university of the same city, where he became a student leader. Juca Kfouri, a columnist at Folha de São Paulo, describes Boulos as “the only person on the Brazilian left who can get 17,000 people on to the streets at the drop of a hat.” Boulos spoke to The Nation in a cafe in downtown São Paulo before heading off for a meeting with PT councilors in the town hall next door.

Andy Robinson: The PT base, [PT leader] Rui Falcão, and even [former PT leader and Brazilian President] Lula [da Silva] have stated their disagreement with the adjustment program. Do you think there may be a change of policy?

Guilherme Boulos: No. There is no indication that Dilma will change. With each new wave of pressure from the financial markets, the government yields. Economic policy is hostage to the market and the new right. It makes no sense, but there it is. The social cost is very high and, moreover, the austerity has annihilated tax revenues, so we’ll have a bigger deficit. The interest rate is very high and we are paying this on public debt. It’s suicide.

AR: Are members of your movement feeling the pinch?

“Dilma has just approved a new anti-terrorist law, and it is being used against us. Imagine that—Dilma, who was imprisoned as a terrorist in her youth!”

GB: Of course. In 2009 the PT launched the most ambitious public housing program in the country’s history, Minha Casa Minha Vida [“My House My Life”]. It had many contradictions and we have criticized it, but it was a big investment in public housing. The program is paralyzed. In 2015 they have not built a single new home. This is generating turmoil and deepening the social crisis.

AR: So that’s why you’re able to mobilize so many people?

GB: Yes. The struggle of the homeless has gained support because of a deepening urban crisis. Government policies were based on a model of providing house-building loans. In 2004, loans to construction companies amounted to 5 billion reals [then around 2 billion US dollars]. In 2014 they reached 102 billion reals, an increase of 2,000 percent. At the same time, the price of housing in São Paulo has risen by 212 percent in eight years and in Rio by 260 percent. This translates into the expulsion of tens of thousands of people. Rents have exploded. The city floor has turned to gold with this urban gentrification. The World Cup and the Olympic Games have exacerbated the housing problem. Even after adding 3 million public homes to the supply, prices are still going up. Brazil is now a machine that creates homelessness.

AR: Do you think the movement can lead a campaign to push government policy in a different direction?

GB: However strong our movement is, it can’t be the vanguard of a popular turn to the left. We are fighting on two fronts: First, the attacks from the anti-PT right. Second, the austerity of the very same PT government and its policing methods. Dilma has just approved a new anti-terrorist law, and it is being used against us. Imagine that—Dilma, who was imprisoned as a terrorist in her youth!

GB: Those mobilizations were very complex. They started with a very clear pattern of left demands, protesting against the urban crisis, transport, the right to universal public services. But then they were channeled to the right and they ended up strengthening conservative forces.

GB: The protests of 2013 should have been an opportunity for Dilma. But the PT is terrified of conflict. They seek coexistence with Congress, and that means corruption. There was the option to govern from the street, which is what [the late Venezuelan leftist president Hugo] Chávez, [Bolivia’s President] Evo Morales, and [Ecuador’s President Rafael] Correa did. But rather than mobilize, Dilma demobilized people. PT policy was always based on social pacts and consensus; Lula used to say that the bankers were winners under the PT governments, and workers too.

AR: That is difficult.

GB: Yes, but it had an element of truth. They chose alliances with mining, agribusiness, and the construction industry, but workers gained too. There were wage hikes, social programs, increased public investment. But this was done without taking on any of the archaic structures of Brazilian society. Those have not changed. It was a model that stimulated credit growth and consumption, and the lives of the poorest improved.

AR: So what went wrong?

GB: After the crisis—which didn’t hit Brazil until 2014, thanks to policies implemented to delay its impact—there was no material basis for that pact. In 2013, was an explosion, a pressure cooker. There was dissatisfaction among the middle classes as well as the elite. The PT’s project did not directly threat their privileges, as Chávez had in Venezuela—the PT was conciliatory. But even here, there was a sense of unease that had to do with symbolic losses for the upper middle class. For example, the poor began to fly for the first time. Airports had been a privilege of the upper middle class and the elite; suddenly, going to the airport was like going to the bus station! Quotas that gave blacks and the poor access to college were a shock to the privileged too. Even these small changes were enough to generate discontent for a very conservative urban upper middle class. And so a very strong anti-PT right came into being. But at the same time, the number of strikes soared, and is still rising. So ever since the 2013 protests, the opposition has two sides, and the right is growing fast. It is a sign of polarization.