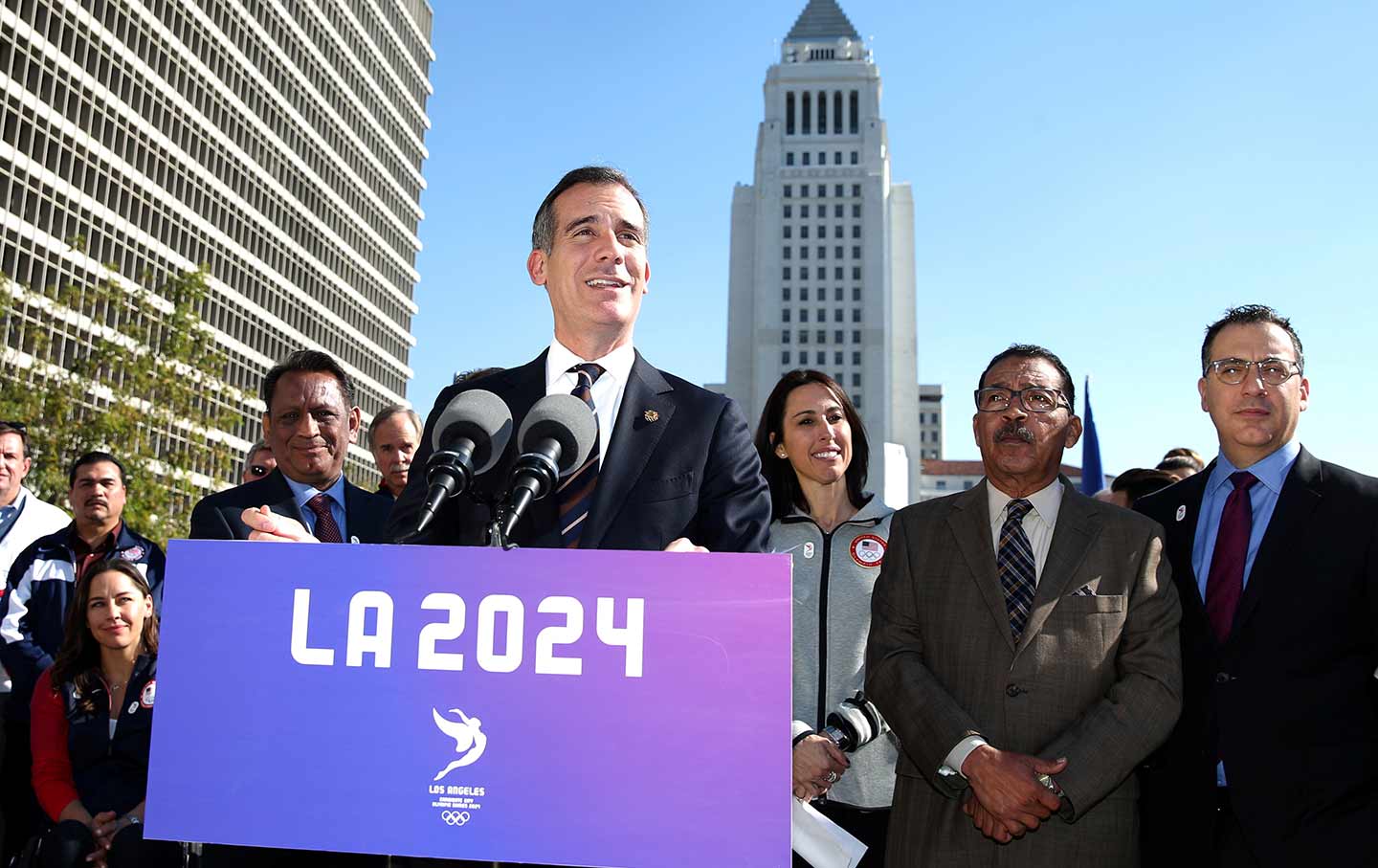 Following the disastrous planning and implementation of the Rio Summer Games, anti-Olympics activism has become as much a part of games as the running of the torch. From Boston to Budapest, from Hamburg to Toronto, residents in host countries have risen up and rejected the Olympic Games. Starting on Monday, May 8, there’s a new anti-Olympics group on the block: NOlympics LA.

Jonny Coleman, an organizer with NOlympics LA, told The Nation, “We oppose the bid on principle. The process is inherently undemocratic and does not take into account the needs of the host city’s residents beyond those who are already rich and powerful, and stand to become even more so from the Games.”

NOlympics LA hopes to raise awareness of the negative effects that the 2024 Olympics could have on everyday Angelenos, with specific messages aimed at the International Olympic Committee. Olympic Committee Co-organizer Anne Orchier told us, “We don’t need to hand over the keys to our city to the IOC, who have proven time and time again that their only interest is in razing cities for their own profit.”

The group’s launch is strategically timed. On Wednesday, a delegation of officials from the International Olympic Committee will jet into Los Angeles for an official visit. The IOC’s Evaluation Commission will hobnob with LA 2024 bigwigs, tour prospective venues, and swig from syrupy presentations that claim staging the 2024 Games in Los Angeles would be an endless parade of rainbows, unicorns, and California sunsets.

In truth these commission visits are fastidiously scripted affairs for friendly media photo-ops. For IOC members they may be as much about figuring out their future vacation destination as discerning the merits of Games bids. In a sense, the visit is a foretaste of the junket of all junkets: the Olympic Games themselves.

After visiting Los Angeles this week, the IOC Evaluation Commission will travel to Paris for a similar stopover. The group will then return to its palatial accommodations in Lausanne, Switzerland, and write a report based on these visits that’s slated for public release in July. Then, in September, IOC will convene in Lima, Peru, to select a host for the 2024 Olympics.

Let’s be clear: Anti-Games activism absolutely matters. We have seen in recent years that only when cities reject the the games, does the International Olympic Committee speak about reform. At the very least, the IOC takes public opinion into consideration when casting its votes.

The 2024 Olympics initially had five bidders. But then a strong anti-Games campaign in Hamburg derailed that city’s bid. In Rome, Mayor Virginia Raggi was elected on an anti-Olympics platform, and once in office, she wasted no time in yanking the bid. Then, the NOlimpia movement in Hungary torpedoed the Budapest bid where the mere threat of a referendum was enough for boosters to pull the plug.

Before all that, boisterous protesters in Boston set the standard for their activist successors. Their script? Protest early and often, hold public forums with economists and sports writers who don’t drink the Olympic-Kool Aid, and make abundant use of social media. Boston Mayor Marty Walsh infamously claimed that the anti-Olympics opposition was “about 10 people on Twitter,” but in the end, feeling the heat, he refused to sign the guarantee that would use taxpayer funds to cover Olympic cost overruns, as required by the IOC.

Unlike other cities vying for the 2024 Summer Olympics, Los Angeles has not seen much public dissent. That’s about to change.

NOlympics LA emerged out of the Housing and Homelessness committee of Democratic Socialists of America chapter in Los Angeles. According to Orchier, “The goal of NOlympics LA is to get the Olympics out of LA, not just for 2024 or 2028, but forever, while we continue to build a foundation for other cities to oppose the IOC and its false claims.” She said, “We need democracy, transparency, and politicians who have the courage to actually do the work of helping all of residents, starting with our vulnerable communities.” Coleman added, “LA has no shortage of problems that are more urgent than securing the bid.”

That’s absolutely true. Los Angeles has the highest number of chronically homeless people in the United States. Relatedly, according to the US Census, LA has more people living in poverty than any other major US city. Last year, LA had the most officer-involved killings in the United States. The LA County Jail is the largest in the country, and its prisoners have issued a staggering number of abuse complaints. NOlympics LA is arguing that to spend money on the Olympics, while all these vital social issues are in play, is scandalous.

As Hamid Khan, campaign coordinator of Stop LAPD, noted, “The Los Angeles Police Department and the Los Angeles Sheriff’s Department have built massive architectures of surveillance and intelligence gathering, including human and electronic technology based programs. If Los Angeles hosts the 2024 Olympics, we can be assured these police departments will be on the frontlines of surveillance and infiltration before, during and after the Olympics.”

One can also add that Los Angeles already learned these lessons during the 1984 Olympics, which coincided with a LAPD crackdown against young black men in South Central, Los Angeles. There is something particularly perverse about all of this Olympic planning, as the city simultaneously— and somberly— commemorates the 1992 “LA Riots,” brought on by conditions that the LA Olympics helped create.

The word is out about underbelly of the Olympics, including just this sort of intensified surveillance of marginalized populations. Sports economists Robert Baade and Victor Matheson recently wrote in an academic paper, “Hosting the Games has become an increasingly expensive gambit; indeed, as the rules for bidding currently stand, the entire structure of the Olympic Games shouts ‘potential host beware.’”

That is essentially what NOlympics LA is asking of Los Angeles residents: beware of what’s being proffered as a sweet deal for the city. As residents of Rio see every day, what lurks behind the Olympic facade is a reality defined by cost overruns, militarization of the public sphere, and a brutal preference for the whims of well-connected elites. It’s not too late, LA, to just say no.