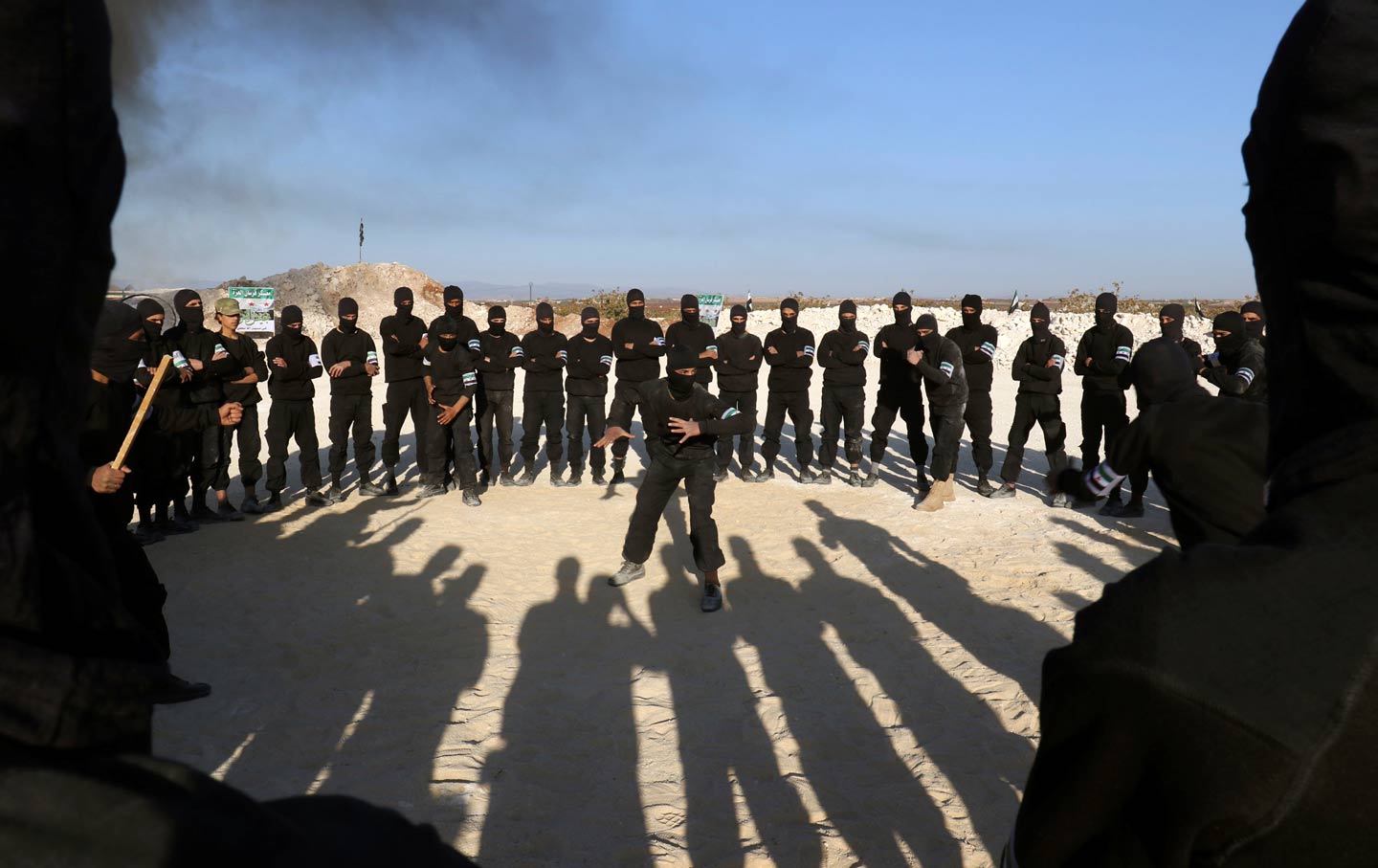 The letter that follows is part of a project that draws on citizen journalists to depict daily life in war zones where international reporters cannot travel due to threats from the warring parties. The author is writing under a pseudonym for his own protection. Funding for this project was provided by the Walter and Karla Goldschmidt Foundation. Istanbul-based journalist Roy Gutman edited.

Idlib, Syria—You can’t imagine the security grip this city is under. Idlib, the capital of the only province in Syria that rebel forces now control, lives in fear of being bombed. Masked, armed men roam the town. Whole streets are blocked off to protect the leaders of the Islamist militia that rules here.

Syrian Writers, Artists, and Journalists Speak Out Against US and Russian Policy

Syrian Writers, Artists, and Journalists Against US and Russian Policies in Syria

Fear has paralyzed the economy because no one will start up a new business in a city with an airstrike every day—on some days up to 12. Everyone who can, heads to the suburbs, including my family, who live in a farm village.

Much worse could follow. If Aleppo falls, Idlib could be the next city under siege. Residents are storing food in preparation. Some have left for the Turkish border. People expect a big revenge from the regime because so many rebel fighters have come here, after having been expelled from other fronts, especially from the western suburbs of Damascus. But they, too, leave as quickly as they can.

Yet the bombing makes no sense to anyone. Russia and the Assad regime say they’re attacking terrorists from Jabhat al-Nusra, which changed its name to Jabhat Fatah al-Sham in July, when it publicly broke its affiliation with Al Qaeda. In fact, the regime targets are outdoor markets, private houses, factories, schools, offices, and the university—but not the Islamists who run the city, nor military positions.

The United States, which calls Nusra’s new name a deceptive rebranding and still considers it a terrorist group, is now sending drones over the province to kill Nusra leaders.

When Nusra took control in March 2015, Idlib entered a dark tunnel of deprivation. But life has improved since July.

But on the streets of this city, known for its mosaic of different religions and its tolerance, it looks very different from both the Russian and the American depictions. When Nusra took control here in March 2015, Idlib entered a dark tunnel of deprivation. Public education deteriorated, the university was closed, and public debate was stifled. But since Nusra broke with Qaeda and changed its name, the city has become a lot more livable.

People here still call it Nusra and feel suffocated by their masks, their guns, and their arrogant manner. But daily life has improved since July. Most restrictions on dress have been lifted. The Hisba, or morality police, are no longer on the streets to enforce them, nor are the women’s police. The Islamic police are demoralized. Even soldiers say their motive for fighting is the pay.

Some things are almost normal, certainly compared with life under the Islamic State, which was once a part of Nusra and now is its rival. Anyone can start up an Internet cafe. Smoking is allowed, though frowned upon. To be sure, music is still banned; the authorities consider it blasphemous (though singing a cappella is OK). So people don’t go to party salons anymore and celebrate weddings at home.

The Fatah Army, an umbrella group of rebel factions that Nusra dominates, has banned the Assad regime’s textbooks on history and religion and has substituted dull courses in Islamic education. High school students say they’re being “lambified”—turned into lambs that are neither pro-regime nor pro-opposition.

Local government is a facade for the Islamists. There is a governor, a mayor, and a Shura, or municipal council, but the supreme body is the Committee of the Fatah Army, which has no contact with residents. It carries out military planning, staffs the front lines, and organizes the fighters. It directs a body called “The Executive Force,” which carries out raids, searches for sleeper cells of the Assad regime or the Islamic State, and generally functions as the all-powerful intelligence agency we are familiar with from the Assad regime.

No one wanted Nusra’s dress code, which required women to wear ankle-length cloaks and to give up makeup.

When Nusra first came to power, it had the upper hand, because it was the biggest group in the Fatah Army. People saw no choice but to accept its rules. They saw it as less dangerous than the regime and the lesser evil. Nusra then created an entire apparatus to impose Sharia law. Sharia courts remain the only form of justice, but the judges are mostly Assad-regime defectors or lawyers, many of them trained professionals.

But the rulers have adapted. They thought they could rule with the “iron and fire” of the age of the Prophet Muhammad. But no one wanted Nusra’s dress code, which required women to wear ankle-length cloaks and to give up makeup. Christians left town, and within six months, most professionals and those with college degrees fled, either to regime-held parts of Syria or to Turkey.

Now the authorities have concluded they cannot oppress the people of the whole city. So they cut back the restrictions. The process began when Nusra disengaged from Al Qaeda, and it continues. Early in November, the Fatah Army leadership met with the city’s elders. Nusra hard-liners wanted to reinstate the tough measures, but the elders opposed it and won. However, there was no public statement.

The liberation extends to primary schools. Last year, schoolgirls had to dress Sharia-style starting in the fifth grade, with black niqabs covering the face, a long black cloak, and a hijab or veil. Last month I visited a local school and saw girls in colorful mantos (a short jacket reaching to the knees) and hijabs colored with embroidery. Some even had makeup.

The women’s police used to patrol the streets in black cloaks and a niqab, an identity card on their breasts, a rifle on their backs. They would take names of women wearing colored dresses or makeup and order them to the city administration building for a course in Sharia-style dress. They would go to a woman’s home and warn the man of the house to keep her in line, implicitly threatening arrest if he didn’t. Now the women’s police are off the streets. I see women driving cars, which would have been impossible early in the summer. Shopkeepers no longer have to close their shops at prayer time. They don’t have to hire a woman to sell clothes to female customers.

The easing extends even to the security sector. There are fewer checkpoints and fewer searches. Meanwhile, respect for the authorities has sunk. The Islamic police, in their black pants and white shirt with a police badge, operate the checkpoints on the highways and inside the city, on the public squares and at security headquarters. They were once a feared security force, but now they are weak, powerless, and simple men, most of whom joined Nusra to earn a salary.

“The Nusra Front is decaying from within. All they have is empty propaganda.”

Recently, while driving in Idlib, my car broke down in the middle of the road. A policeman helped me push my car to the side of the street. He had a pleasant smile, even though he had a long beard and thick hair. I thanked him, went back to my car, and tried to flag down a motorist to give me a push when he told me to stop. “The people of Idlib won’t help you,” he said.

We started to talk. He said he had defected from Assad’s police force and needed to make living. “What else can I do? I am 45 years old. I can’t work as a porter. I don’t have the capital to start my own business. I applied for a job with Nusra, and they assigned me to the police corps.”

His salary varies from $20 to $100 a month. He told me he doesn’t care about security in Idlib. The most important thing is his salary. For one thing, he has no power to enforce the rules. “If a driver parks in the middle of the road, he pretends that he doesn’t see me,” he said. Why, I asked. “That man may be an element of the Fatah Army. He might shout at me. He might insult me or even beat me up. If he is a fighter, he might shoot me. And no one will come to my aid.”

I was stunned. How can a Nusra element speak this way, I asked. “I am not a member of Nusra,” he replied. “I am an employee. I only get my salary from Nusra.” He went on to curse the Nusra bigwigs who drive around in big cars that consume $20 worth of fuel a day. “This is equal to our salary for a month,” he said. “Let Nusra go to hell.”

Later I met a Nusra soldier. Abdulkadir had a broad smile and a nice temperament. I asked him what he does for Nusra. “Everything,” he said. One day he is a policeman, the next day a suicide commando, then he’ll be a normal fighter. He is ferried to the front lines two days a week with other fighters and spends the rest of the time at his home. At the front, they while away their time drinking tea and using social media with their smart phones until the two days are up.

Abdulkadir said it is not his business if the regime or the rebels advance, so long as he got paid each month. “We don’t believe in the revolution,” he said. “We believe in the salary!”

What he said voids all meaning from jihad. That fighters are motivated only to make a living undercuts their entire rationale. They take a risk by fighting. “The regime might attack us, and then we’ll be killed. If that happens, may Allah have mercy on us. If nothing happens, all the better. Alhamdullilah [praise be to God],” he declared. “For me, it’s a horrifying picture. The Nusra Front is decaying from within. All they have is empty propaganda.”