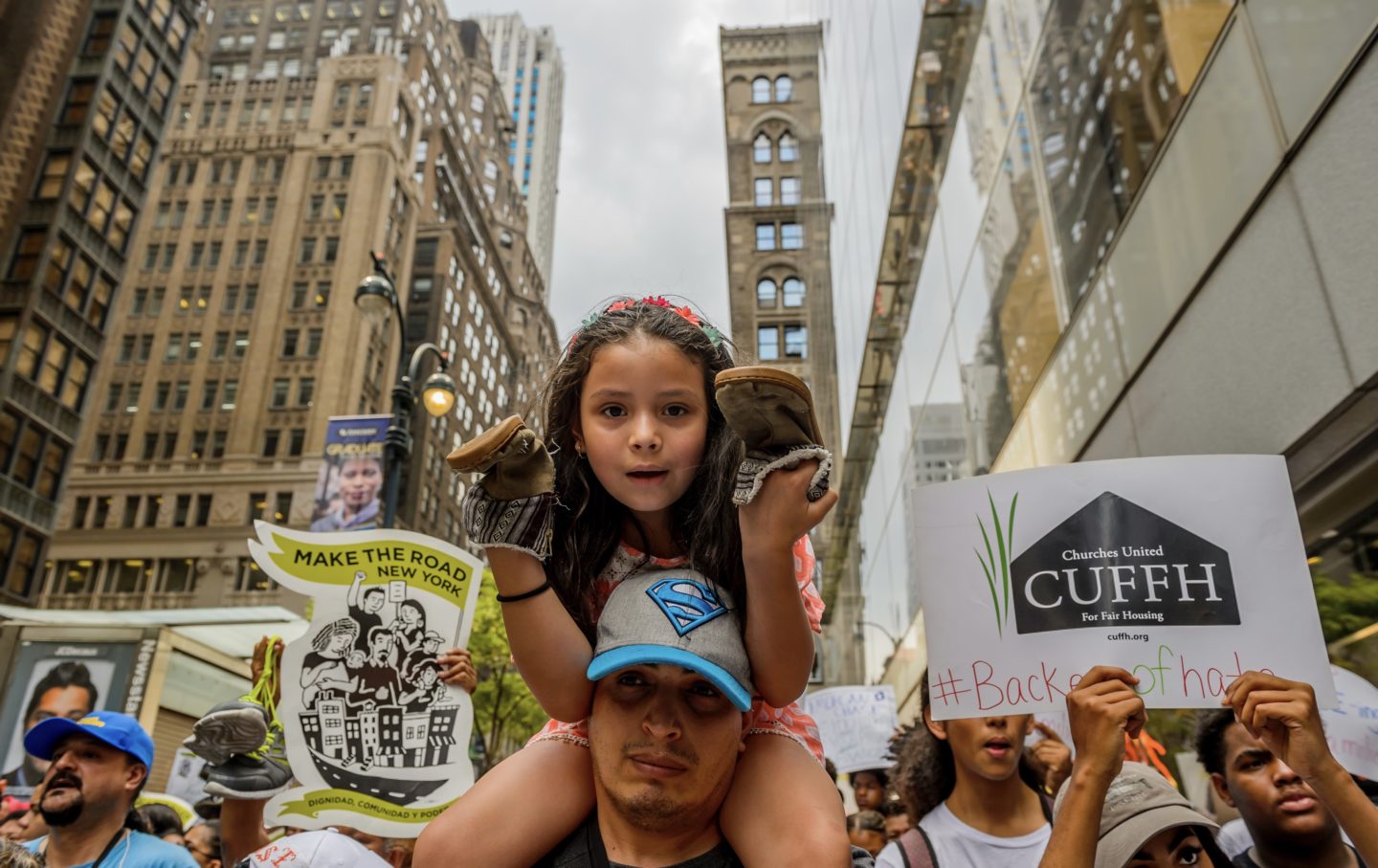 Hundreds of immigrants and allies in New York City protested outside JPMorgan Chase offices on August 2, 2017. (Sipa via AP Images)

On March 5, JPMorgan Chase made headlines by announcing that the bank would no longer finance private-prison and immigrant-detention companies. This is the first major bank to make such an announcement, marking a potential sea change in the fight against private prisons. But it’s more than that—it also marks the sophistication and tactical savvy of an immigrant-rights movement that is working to cut off all sources of funding for the private immigrant-detention industry.

Roughly 70 percent of the immigrants detained in this country are held in private facilities that belong to companies like Geo Group and CoreCivic. These companies have notorious records of abuse and neglect, with a long track record of violence and sexual assault, especially for trans and queer detainees. In 2016 and 2017 alone, 22 people died in immigrant-detention facilities, with most of the deaths occurring in privately run centers.

Tuesday’s announcement that JPMorgan Chase would no longer be supporting these detention sites did not emerge spontaneously, from the kindness of bankers’ hearts. For more than two years, immigrants and allies participating in the Corporate Backers of Hate campaign have worked to expose the profit-generating mechanisms behind locking up immigrants and people of color in private prisons and immigrant-detention centers. The National Prison Divestment Campaign has led the way in this research and laid the ground for understanding the skyrocketing numbers of people housed in private immigrant-detention centers.

As immigrant-rights groups have highlighted, private-prison companies receive enormous government contracts from agencies like Immigration and Customs Enforcement, or ICE. But they also rely heavily on private financing. As research conducted by our own organizations, the Center for Popular Democracy and Make the Road New York, and our allies, has shown, at the end of 2017, 9 of every 10 dollars CoreCivic had on hand were borrowed. For GEO Group, 19 out of every 20 dollars were borrowed. Before JPMorgan Chase’s announcement, the bank was the largest holder of debt for the industry, with 62 percent more than the second-biggest lender to Geo Group and CoreCivic. 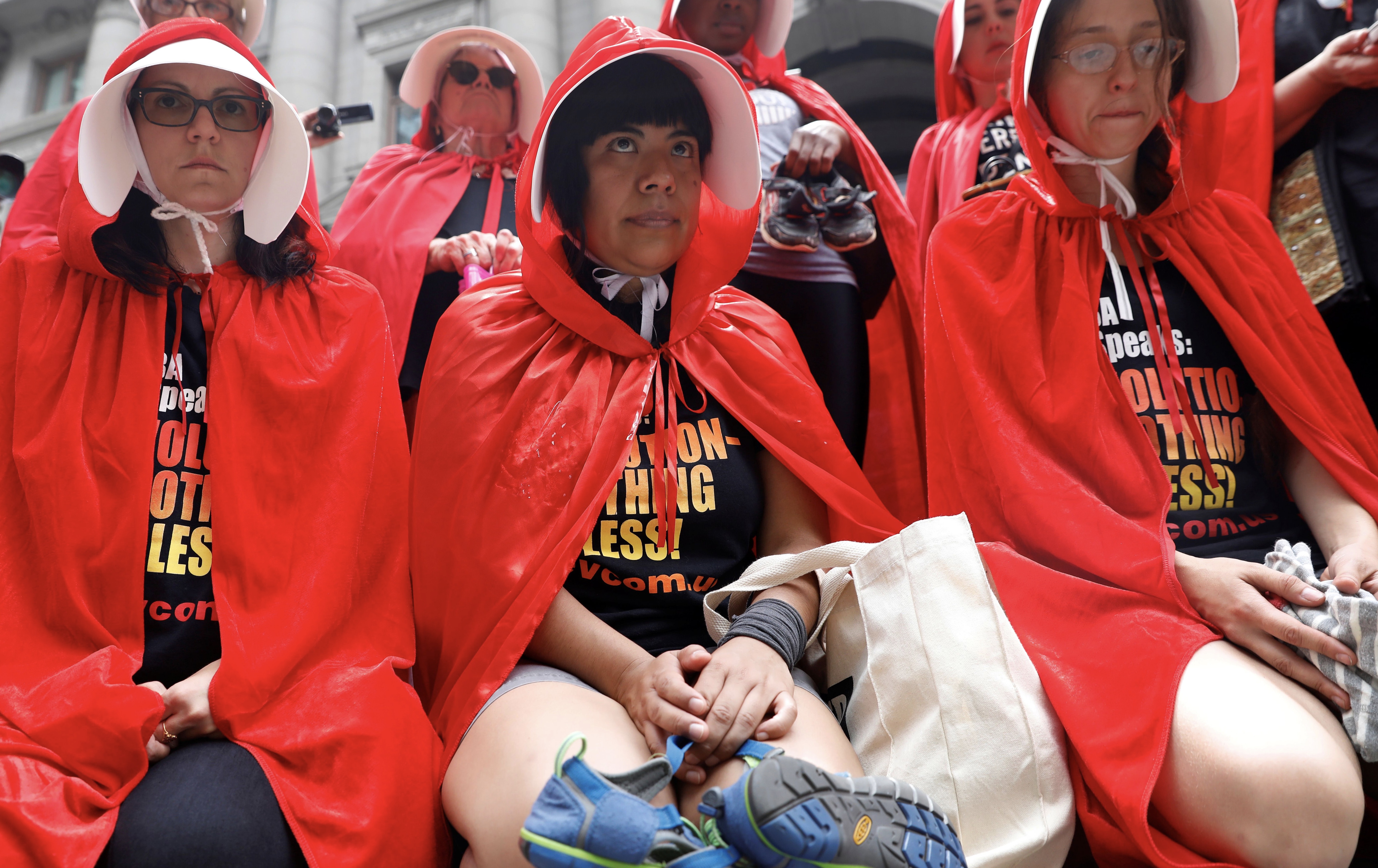 To end the abuse in private detention centers, immigrants and people of color are increasingly aware that we need to target all sources of funding, whether public or private. For years, immigrant advocates have pushed hard in Washington to cut public funding for morally bankrupt immigrant detention, including for the private-prison industry. Our call has been to end the cascade of tax dollars used to keep our loved ones in cages. These efforts have begun to have an impact: while the recent border deal increased funding for detention, some Democrats who have long been silent on detention issues are increasingly speaking up in Congress and scrutinizing allocations for deportation and detention.

At the same time, we have also known that stopping inhumane immigrant detention would mean cutting off all resources to the private-prison industry. And we now know that when directly affected people lead the way, we can block private sources of funding.

To apply pressure, the Backers of Hate campaign carried out a series of protests focused on banks, including JPMorgan Chase, which were providing a range of financing mechanisms to private-prison and immigrant-detention companies responsible for grave human-rights abuses. People marched to their corporate headquarters, confronted bank CEO Jamie Dimon at shareholder meetings and an investment conference, rallied outside Dimon’s Park Avenue home, and delivered petitions and letters to bank branches nationwide. Throughout, the efforts were led by immigrants who have themselves, or whose loved ones and neighbors have, suffered in detention, with strong support from the Families Belong Together coalition.

Particularly prominent were trans, gender non-conforming, intersex, and queer immigrants, who shared powerful accounts of discrimination, abuse, and sexual assault in Geo Group and CoreCivic facilities. Jonathan Cortes, a Make the Road New York member who was detained in a CoreCivic facility in 2016, was among those who came forward to tell his story. Cortes had arrived in the country after fleeing Honduras, where he was violently attacked for being gay, to seek asylum. But instead of being able to adjudicate his claim in freely, he wrote in an article published last year, he was thrown into a cage.

“No matter how I tell my story,” he explained, “it won’t describe the horrors I faced during the seven weeks I was in CoreCivic’s detention facility. I lost more than 11 pounds, being fed a diet that consisted almost entirely of potatoes, often served boiled and unpeeled. I was awoken for breakfast at 3:30 every morning and only allowed outside for one hour a day. To afford phone calls to my mother, I was forced to work six-hour shifts scrubbing walls and mopping floors, earning a dollar a day. Each one-minute call cost two dollars.”

Stories like Cortes’s broke through the media noise machine by showing the true human consequences of the banks’ actions. And with those like Cortes leading the way, the campaign had its first major breakthroughs in 2017 and 2018, as New York City and New York State both opted to divest their pension funds of stocks in private prison companies.

Now, the announcement from JPMorgan Chase could mean a monumental shift in private backing for immigrant detention: One of the largest financiers of private prisons has publicly acknowledged that its potential profits are not worth the reputational and financial risk of ties with private-prison companies. With Wells Fargo indicating it will no longer “actively market” to the sector—a welcome move, though it stops short of cutting off financing entirely—momentum is building and could soon spread to banks across the country.

The Backers of Hate campaign will now turn its effort to ensure that Wells Fargo, and other banks like Bank of America and SunTrust, cease their financing of private-prison companies. This will put these corporate prisons, whose business model relies on such lines of credit, bonds, and underwriting, in an untenable position. And, as we move towards the next federal budget fight, activists can use this momentum to strengthen our call to cut federal resources to private-prison companies.

Americans have been rightly horrified by how Donald Trump’s detention forces—ICE and Border Patrol—tear apart families and lock people in cages. The good news is that immigrant communities and their allies are exposing how this infrastructure works and how it’s funded. By continuing to take on both the public and private sources of funding, we can put this morally bankrupt industry out of business once and for all.