Women dressed as characters from The Handmaid’s Tale protest outside the Department of Homeland Security Cybersecurity Summit where Vice President Mike Pence was appearing, July 31, 2018. The protest was among a dozen flagged on an ICE spreadsheet. (Reuters / Shannon Stapleton.)

In the late summer of 2018, as protests against the Trump administration’s immigration policies intensified and the movement to abolish ICE gained momentum, the federal agency at the center of the storm was keeping tabs on a series of “anti-Trump protests” in New York City, according to documents obtained by The Nation via a Freedom of Information Act request. Among the protests the agency tracked were several promoting immigrants’ rights and opposing the administration’s deportation policies, as well as one protesting the National Rifle Association. One event was organized by a sitting member of Congress.

On the balmy evening of July 31, 2018, Congressman Adriano Espaillat, a Democrat who represents parts of northern Manhattan and the Bronx, organized a rally at Fort Tryon Park in Upper Manhattan to protest the white-supremacist group Identity Evropa. Just a few days earlier, a gang of Identity Evropa members had gathered at the very same park to unfurl a racist, anti-immigrant banner from a bridge there. “Stop the Invasion,” the banner had read. “End Immigration.”

Disclosure: This reporter attends Judson Memorial Church, where the New Sanctuary Coalition has its offices, and briefly volunteered for the coalition in early 2018.

Identity Evropa’s action was an affront to the local community, Espaillat says. The rally he organized in response, which was titled “Uptown Standing Together Against Racism and Xenophobia,” was meant to counter the group’s hateful message. Espaillat’s district includes a robust immigrant presence, many from his native Dominican Republic, and he himself is among the first formerly undocumented immigrants to serve in Congress.

“Our rally was about unity,” Espaillat says, noting that the family-friendly event was attended by more than 300 people, including children and young people, as well as New York State Lieutenant Governor Kathy Hochul and State Assembly member Carmen de la Rosa. “It was about pushing back against hate and telling our immigrant neighbors, our Latino neighbors, our Jewish neighbors that we will always stand with them if they are targeted by racist and anti-Semitic groups.”

Despite this inclusive and peaceful sentiment, Representative Espaillat’s rally ended up on a government list. In an e-mail sent out on the afternoon of July 31, 2018, Homeland Security Investigations (HSI), the investigative arm of Immigration and Customs Enforcement (ICE), transmitted detailed information to an undisclosed number of recipients, including at least one Department of Homeland Security supervisor, about public protests planned by mostly liberal and left-leaning groups in New York City. The e-mail contained a four-page document, titled “Anti-Trump Protest Spreadsheet 07/31/2018,” which listed the time, date, location, and purpose of upcoming protests slated to take place around the city.

The document, which covered protests that occurred between July 31 and August 17 last year, also contained the names of the groups sponsoring each protest and the number of people who had signed up on Facebook to attend them.

The July 31 e-mail from the HSI account contained a simple message to its readers: “All, Please see below listing…with updated protest information. Please remain vigilant and aware of your surroundings.” 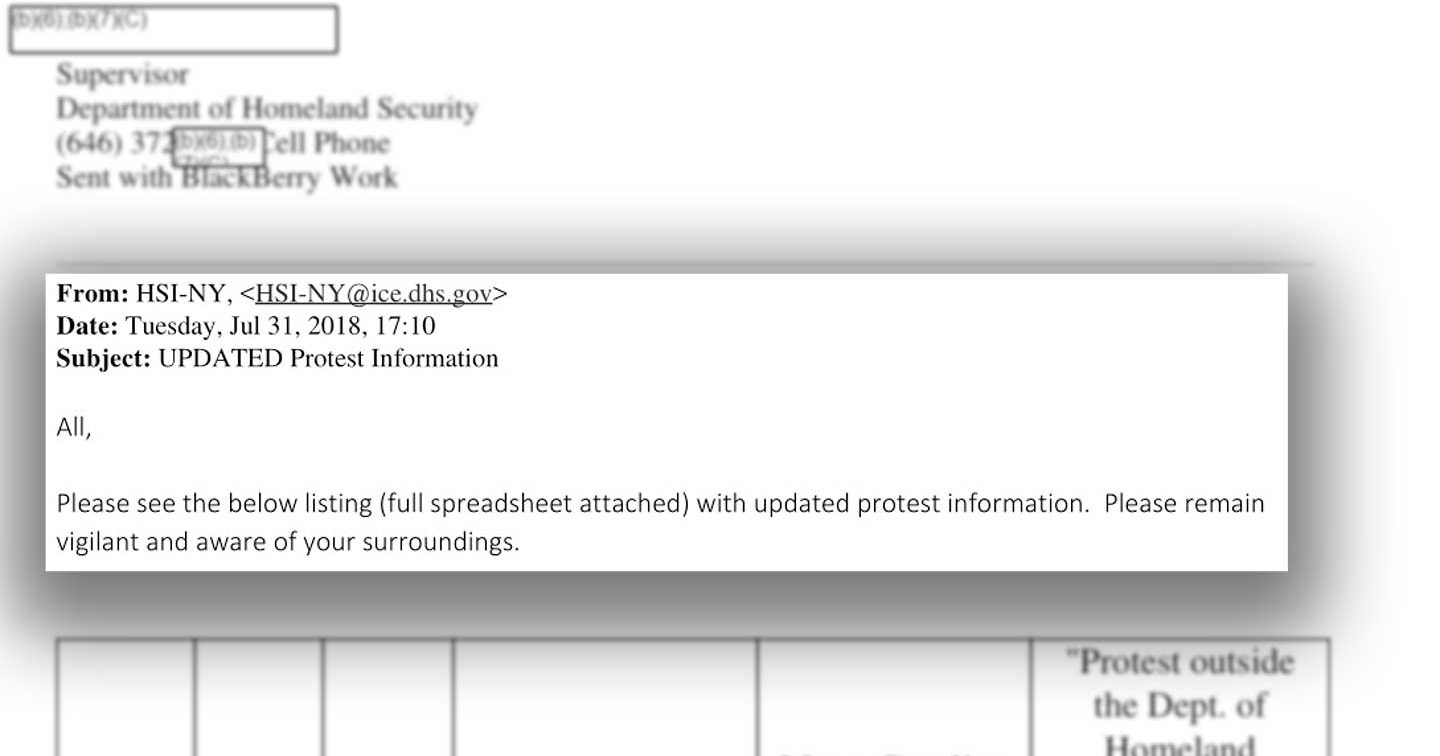 Representative Espaillat’s rally against white supremacy was one of a dozen protests included in the “anti-Trump protest spreadsheet” that HSI sent out via e-mail that day. The protests on the list occurred in a wide variety of locations around Manhattan, and at least one took place in Brooklyn. While it is not known whether this spreadsheet is a standalone document or part of an ongoing agency effort to monitor protests, it provides evidence that ICE has, for at least a brief period, kept tabs on left-leaning political activities and Trump opponents in New York City.

“I am shocked. Totally shocked,” Espaillat says of the “anti-Trump” spreadsheet.

“I would like to find out why our event was on that list, and whether it was surveilled or infiltrated, and why the racist, anti-Semitic group was not on the list,” he adds, referring to Identity Evropa, a notorious group that helped organize the violent white-supremacist rally in Charlottesville, Virginia, in 2017.

In addition to the event organized by Espaillat, the “anti-Trump protest” spreadsheet lists protests and marches organized by Young Progressives of America, Refuse Fascism NYC, NYC Says Enough, the New Sanctuary Coalition, and Rise and Resist, which garnered the most citations of any group.

In early August of last year, Rise and Resist organized a series of “Abolish ICE” protests around New York City that targeted prominent Democratic politicians, including Governor Andrew Cuomo and Senator Chuck Schumer, as well as Wall Street and the federal government. The protests all ended up on the “anti-Trump protest” spreadsheet.

Meanwhile, on August 4, Gays Against Guns organized a protest against the National Rifle Association titled “March on the NRA NYC” that began in Central Park and continued to the Consulate General of Russia. This too appears on the list.

“It really is troubling to me,” says Ken Kidd, an organizer with Gays Against Guns in New York. “How is a list like this compiled? Who makes the distinction that one group makes the cut and another one doesn’t? Is it just a whim? It seems to me to be very dangerous. It is a terrible precedent.”

Only one conservative event—a pro-ICE, pro-border-wall protest that was described as being organized by a pair of right-wing groups, including the “New Jewish Defense League,” in New York City on July 31—was included on the list. However, it was described in the spreadsheet as a “counter-protest.”

ICE declined to comment on the specific logic that informed its “anti-Trump” protest spreadsheet. But in a statement to The Nation about the e-mail containing the spreadsheet, agency officials said, “it is important to note that Homeland Security Investigations (HSI) special agents are regularly conducting field investigations in the New York city area. The referenced e-mail was provided to HSI agents for situational awareness should any HSI employees be travelling through those areas, whether on work or personal time.”

The statement continued, “Due to operational and safety implications, the agency does not discuss specific operational tactics. However, all investigative and enforcement activities are conducted with professionalism and strict adherence to all applicable law and agency policies.”

The “anti-Trump protest” spreadsheet that ICE sent out last summer is not the only evidence that the agency has been keenly attuned to left-leaning political activity in New York City. E-mail communications obtained by The Nation show that top officials at ICE’s New York field office appear to be highly aware of organizations and advocates opposed to their controversial agency, which includes detaining and deporting undocumented immigrants.

On February 14, 2018, immigrant-rights advocates with the New Sanctuary Coalition held an Ash Wednesday demonstration outside the ICE offices at 26 Federal Plaza in Manhattan. The protesters planned to offer ashes, as per Christian tradition, to all who passed by as a symbol of solidarity with immigrants facing deportation. An email exchange between the deputy field director of ICE’s New York Field Office and the assistant field-office director, whose names have been redacted, shows that the officials were well aware of the planned demonstration.

The Ash Wednesday protest “saves us the trip of going over to the church,” wrote the assistant field-office director in a February 14 e-mail. “I certainly hope they [the immigrant rights activists] won’t discriminate against ICE officers.”

“I’ll pass,” the deputy director responded, implying that he would not accept ashes from the religiously-minded protesters.

Several months later, in a July 24, 2018 e-mail, the deputy field-office director of ICE’s New York Field Office, whose name has been redacted, sent an e-mail to a number of top local ICE officials and what appear to be multiple ICE listservs—including one titled “#Ice-Watch_Event_Notification”—in order to provide agency personnel with information about an upcoming protest in front of ICE’s offices in Manhattan. The protest, dubbed the “Deportee Suitcase Solidarity March,” occurred on Thursday July 26 and was meant to highlight the cruelty associated with deportations. (Also flagged in the e-mail was a smaller event, organized by Occupy NYC, titled “Abolition Music Fest!”)

The July 24 e-mail, which was sent by the deputy field-office director and labeled “confidential” and of “high” importance, contained detailed information gleaned from the Deportee Suitcase Solidarity March’s Facebook page. This information included the number of people who had signed up on Facebook to attend the event, a description of the event, and the name of event sponsors, like the Legal Aid Society and the New Sanctuary Coalition.

“This e-mail is to inform you of a planned protest at the ERO NYC Area,” the e-mail said, referring to the branch of ICE known as Enforcement and Removal Operations, or ERO. “The protest is being coordinated by approximately 40 different groups located throughout the NYC area.”

The news that ICE has paid close attention to “anti-Trump” protest activities in New York comes after immigrant rights groups filed a federal lawsuit against the agency in February 2018. In the lawsuit, the New Sanctuary Coalition and its executive director Ravi Ragbir, among other groups, allege that ICE is violating the First Amendment by targeting prominent immigrant rights activists for surveillance, arrest and deportation. The litigants believe that ICE has specifically pursued activists such as Ragbir, who hails from Trinidad and Tobago, for deportation in order to suppress their political activities. The case is awaiting a decision from the US Court of Appeals for the Second Circuit.

“The fact that we have an agency as powerful as ICE targeting our communities because they have chosen to speak out against President Trump and his harsh immigration policies should disturb every American who believes this kind of dissent is critical for protecting our democracy,” she says.

Civil liberties experts, meanwhile, fear that ICE’s apparent monitoring of protest activities in New York could have a broader chilling effect on the freedom of speech and peaceable assembly.

For their part, ICE officials told The Nation that their agency “fully respects the rights of all people to voice their opinion without interference.”Note: Readers interested in exploring the ICE documents obtained by The Nation can find the July 31, 2018, e-mail containing the “anti-Trump” protest spreadsheet here; the Ash Wednesday email exchange here; and the July 24, 2018, e-mail about the Deportee Suitcase Solidarity March here.e.