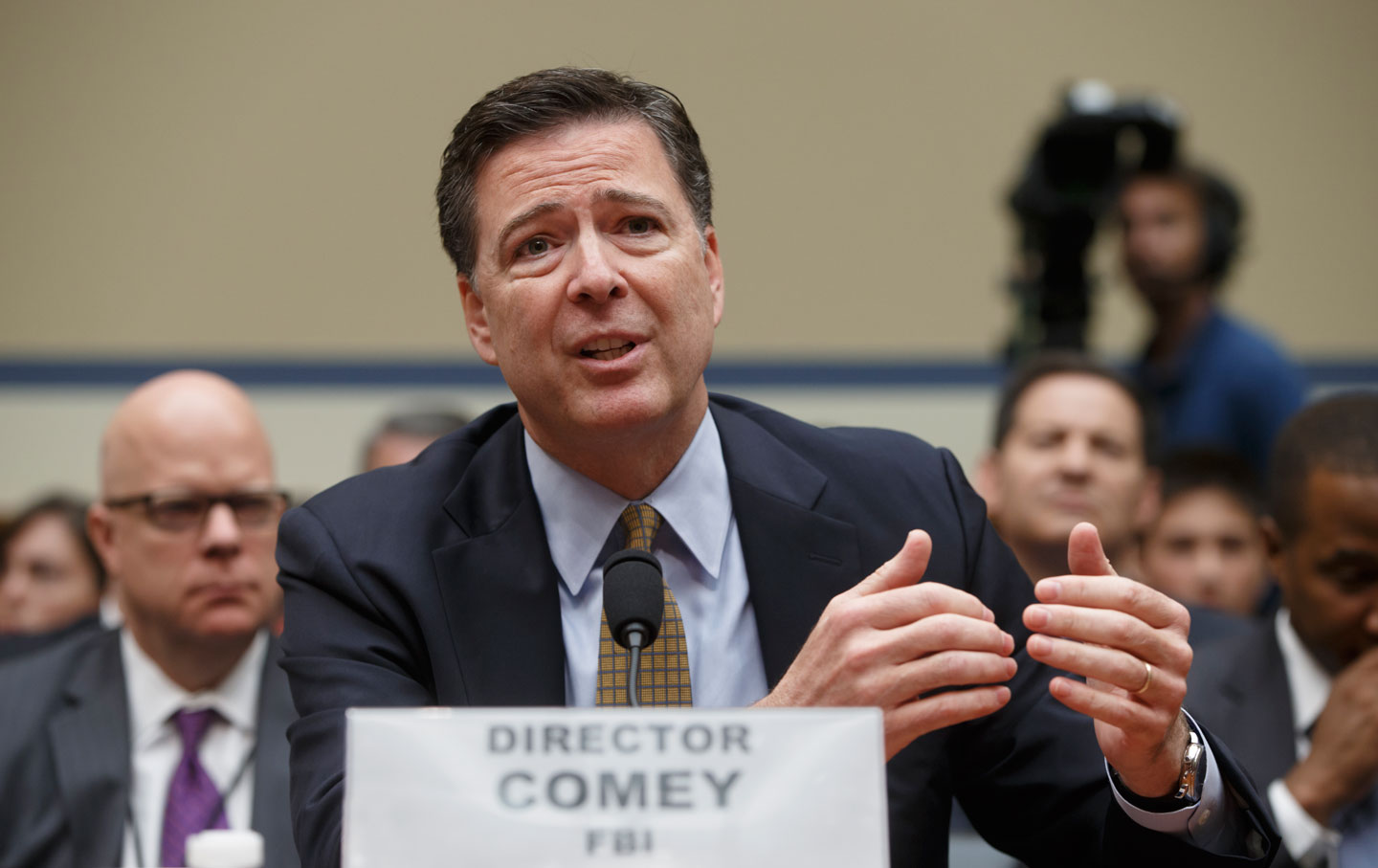 It is essential that you speak to the American people as soon as possible to clarify messages you recently sent to Congress and FBI employees. You surely know that your statements about newly found e-mails—the content of which, you wrote, neither you nor bureau investigators know—have created tumultuous reactions and great confusion in these crucial days as Americans prepare to vote next Tuesday in this controversial and very important presidential election.

In your message to employees, you wrote that you did not want your message to Congress “to create a misleading impression.” You also noted that “there is a significant risk of being misunderstood.”

Indeed, your messages did create a misleading impression and, as you predicted, have been misunderstood. Your unusual actions are fueling uninformed debate about the candidates and about you and the bureau.

Only you have the capacity to mitigate the growing severe damage that is taking place as a result of your premature and unclear statements. You can do so by holding a press conference and announcing to the public that, given your and bureau investigators’ total lack of knowledge of whether the content of the newly found files has any connection to the Clinton e-mail case, voters should not consider your message to Congress or the existence of the new e-mails as having any bearing on their decision as they vote for president.

From the beginning of James B. Comey’s 10-year term as FBI director, when he was appointed by President Barack Obama in 2013, he has repeatedly condemned the practices of FBI Director J. Edgar Hoover. Speaking of Hoover’s order to wiretap the Rev. Dr. Martin Luther King Jr. and use the tapes to drive the civil-rights leader to commit suicide, Comey said in a Georgetown University speech last year that he keeps these atrocities of his late predecessor in mind “to ensure that we remember our mistakes and that we learn from them.”

The director, however, seems not to have learned from other grievous mistakes made by Hoover. The actions Comey took last week place him firmly in one of Hoover’s worst traditions: using the enormous power of the bureau, whether or not intentionally, to affect the outcome of a presidential election.

The Department of Justice policies that prohibit actions that might influence an election were put in place and long adhered to because of a determination years ago to prevent both the bureau and the department from continuing Hoover’s illegal practice of taking steps to influence elections.

Intervention in elections was second nature to Hoover, simply a part of his job. It was perhaps a logical extension of some of his other favorite activities: spying on thousands of Americans because of their political beliefs and plotting dirty tricks and even crimes to destroy the lives of people he perceived as enemies of either the political system or of American values as he defined them. He kept massive files on the personal lives of members of Congress and other people, including educators, journalists, and activists in the civil-rights and antiwar movements. At a moment’s notice, he would dip into these secret files and select those he thought could be used to defeat a candidate. Or, if he didn’t have a file on a new candidate, agents and informers would be dispatched to develop such files.

Unlike Comey’s recent very public foray into possible election distortion, Hoover did it all secretly. Americans had no idea that the widely admired FBI director had secretly long assumed he could be a law unto himself. The public and Congress learned about Hoover’s crimes not as a result of congressional oversight, as there was no oversight of the bureau during his years as director. They learned about it after eight people burglarized the Media, Pennsylvania, FBI office, in March 1971. The files the eight stole from that office and made public by giving them to journalists—including me, a Washington Post reporter at the time—revealed Hoover’s massive spying operations, including COINTELPRO, perhaps his most vicious project, and eventually led to congressional investigations of all intelligence agencies. Those investigations and subsequent research by scholars and journalists of FBI files, which became accessible to the public for the first time as a result of the strengthening of the federal Freedom of Information Act in 1974, led to the discovery of Hoover’s secret schemes, including his plots to influence presidential elections.

On President Johnson’s behalf in 1964, Hoover arranged for a high FBI official to search for derogatory information about 15 members of the staff of Senator Barry Goldwater, Johnson’s opponent in that year’s election. In 1952, Dwight Eisenhower appeared to be uninvolved in seeking FBI services against his opponent, Senator Adlai Stevenson, but members of Eisenhower’s staff asked for FBI help. Information was provided for a whispering campaign that claimed Stevenson’s staff was made up of “pinks, punks, and pansies.” An agent involved in the effort later claimed that “a lot of us were absolutely appalled by” the effort to imply that Stevenson was gay. But, said the agent, “Mr. Hoover was determined to elect Nixon [the Republican vice-presidential candidate] and Ike, and when he made up his mind to do something there was no changing it.”

That same determination to help a favored candidate was evident, perhaps more than ever, when Hoover, at President Johnson’s request, sent a squad of 30 agents to the Democratic Convention in Atlantic City in 1964 to wiretap, bug, and conduct covert operations against members of his Johnson’s own party whom the president feared. Some agents posed as reporters to infiltrate various groups at the convention, including the black Mississippi Freedom Democratic Party, whose delegates had been excluded from that state’s Democratic delegation.

Those actions by Hoover could have informed Comey when he considered how to respond when he learned about the many files found on Weiner’s laptop. Comey admitted in the two brief letters he sent to Congress and FBI employees that he and bureau investigators had no knowledge of whether any of the files are related to the investigation of Clinton, let alone whether any of them are classified messages related to Clinton.

It seems logical—and in the best interest of fairness to the target of the investigation and in the best interest of the integrity of the bureau, the department, and its highest officials, including Comey—that instead of immediately notifying chairs of congressional committees and the public that the bureau might have just received new messages relevant to the previously completed investigation, he should have waited until the investigators determined whether the files hold any relevance to the case.

Congressional oversight committees were among the most important reforms initiated after Hoover’s many corrupt actions were revealed in the 1970s. It never was intended, though, that the FBI would notify Congress about new material that had not yet been investigated internally, let alone had not yet been read and assessed.

Comey first became known to the public for what was widely regarded as a heroic action he took in 2004, when he threatened to resign from his position as deputy attorney general in the administration of George W. Bush. He was outraged at Bush’s willingness to conduct National Security Agency surveillance outside what Comey regarded as the legally imposed limits on the program.

That well-known incident established Comey in public perception as someone whose sense of integrity demanded that he be independent and not be intimidated by political pressures. Thus he seemed an appropriate candidate for head of the FBI, the country’s most powerful law-enforcement agency and an agency that during Hoover’s long and remembered half-century reign was deeply tainted by political influence.

It is possible that Comey’s interpretation of the need for the bureau and its director to be, and appear to be, fiercely independent led him into the mess he—and the election process—is now in. Both Democrats and Republicans have criticized his rush to announce that maybe the bureau had found new material that, at some later date, might justify revisiting the investigation of Clinton. Only Donald Trump and the thousands who shout “Lock her up!” at his rallies seem to think the director’s announcement was wise. Small wonder. The director’s action seems to have breathed new life into a campaign that was faltering.

Ironically, by asserting independence in this case—going against the expressed opinions of Attorney General Loretta Lynch and Deputy Attorney General Sally Yates that he not announce to Congress that the bureau might have found new significant material in the Clinton case—Comey fell into another Hoover pattern of behavior.

Hoover believed he was totally independent from the Department of Justice, despite the fact that the attorney general was his boss. Few of the attorneys general Hoover served under assumed their FBI oversight responsibilities and instead gave him free rein. One attorney general discovered that Hoover maintained secret files on thousands of Americans, collecting personal and political information about them. That attorney general, Francis Biddle, told him such actions were unconstitutional and ordered him to destroy the files. Hoover ignored that 1943 order and continued to develop such files until he died in 1972. So much for that type of independence.

It is one thing to insist on being independent from control of superiors when one regards their demands as unethical or illegal, as Comey did when he confronted President Bush in 2004 and was prepared to resign rather than approve a program he thought was being conducted illegally. It is quite another thing for him to assert independence in the face of his superiors Lynch and Yates, who concluded that his plan to write to Congress could undo the integrity of the election process, of the director himself and the bureau, as well as the integrity of the Department of Justice, by launching all of them into the situation that tradition and policies were established long ago to avoid: the disruption and reshaping of a presidential election.