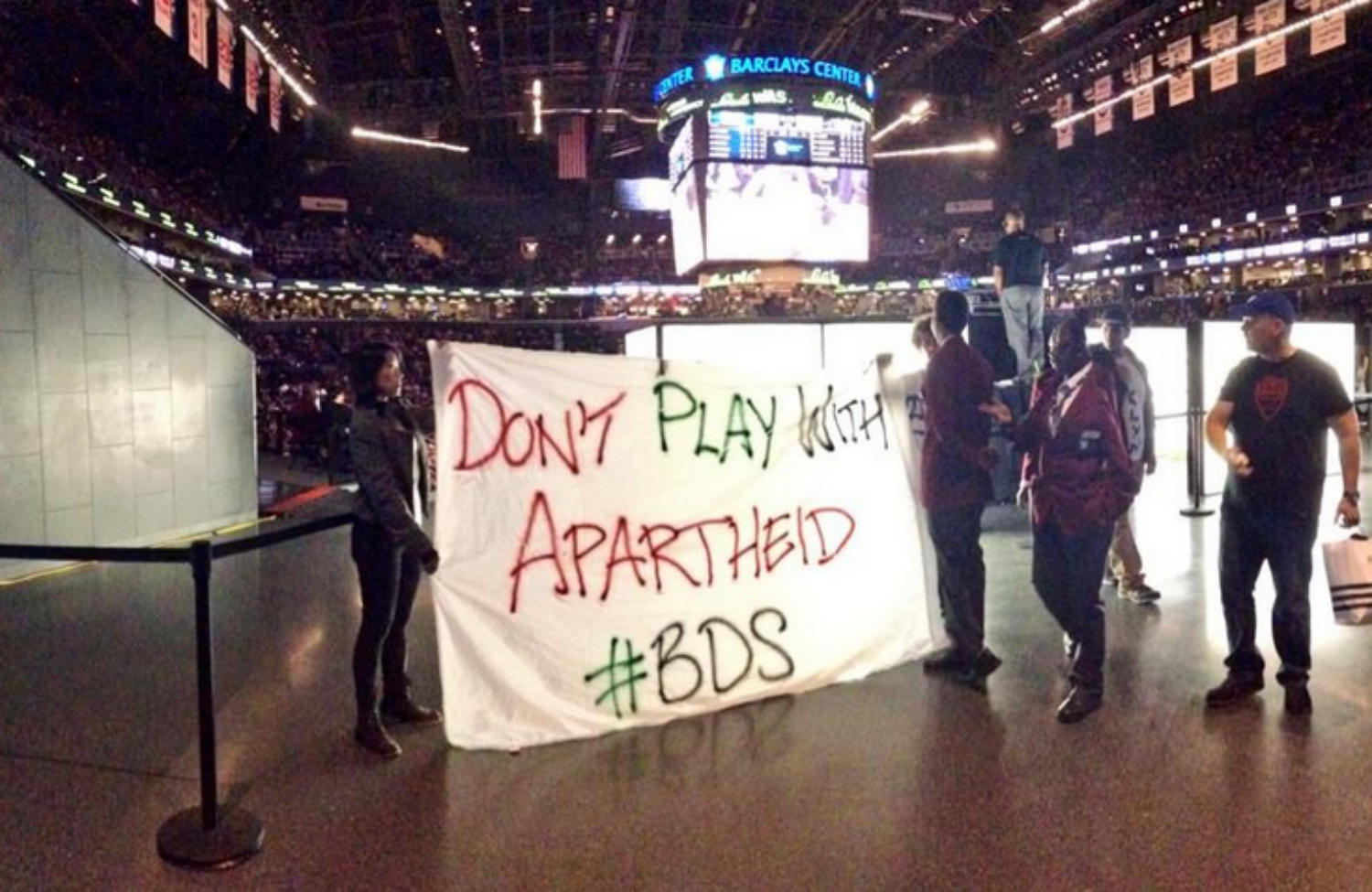 When activists arrived at the Barclays Center in Brooklyn to protest a Friends of the Israeli Defense Forces fundraiser that was coupled with an exhibition game between the Nets and Israel’s Maccabi Tel Aviv, the police were waiting with a message of their own. As the night unfolded, this message spoke volumes. Protesters would not be allowed on the expansive plaza that unfolds from the front of the Barclays Center all the way to the Atlantic Yards subway entrance. Instead, they would have to be in a fenced-off pen on the narrow strip of sidewalk to the side of the arena. Yes, an outdoor space built with public funds was deemed a privatized, no-free-speech zone, enforced by armed public employees, otherwise known as the police.

Brooklyn journalist Norman Oder, who’s written—and continues to write—a blog about the Atlantic Yards project for almost a decade, explained to me the way it works: “To the extent there are restrictions on activity at the plaza—the Daily News Plaza, to be precise, given the newspaper’s sponsorship—we must remember it’s not quite a public space, despite the significant public support—direct subsidies, tax breaks, eminent domain, override of zoning, and giveaway of naming rights—for the Barclays Center.”

(In an attendant irony, I was told at one point by arena security that reporters couldn’t talk to people in the “Daily News Plaza”.)

I asked one police officer to distinguish between “open space” and “private space” for freedom of assembly. He said, “This plaza is private land owned by Barclays. If a demonstration happens here, it’s because Barclays says a demonstration can happen here.”

That’s what made what then unfolded all the more bizarre. While 200 people marched around the tightly constricted pen with signs that read, “Don’t play with apartheid” and “This Jew says no to Gaza slaughter,” counter-demonstrators gathered on the private, open-space plaza. All male, mostly young and carrying Israeli flags, they showered the demonstrators with profanity. Many not holding a flag held phones up with one hand, videotaping the protesters, and raised a middle finger with the other. When I attempted to interview one young man, he said, “Fuck them, fuck your questions and fuck you. Get the fuck away from me before I bury you.” I asked how he wanted to be identified. He said, “My name is ‘fuck you.’”

Not seeing much opportunity for discussion on this side of the barricades, I asked several police why this counter-demonstration was permitted on what I thought was private land. Did Barclays clear this? Most wouldn’t answer, although one more loquacious officer said to me. “That’s above my pay grade. Maybe if you raise taxes here and increase my salary, I’ll have an answer.” (I am waiting for comment from the Barclays Center about whether this counter-demonstration received any kind of official approval.)

As for the protesters, their presence was animated by the summer’s ongoing war on Gaza. I asked Pam Sporn from Jewish Voice for Peace what she would say to those who would deem a sporting event an inappropriate place for a protest. She said, “One of the most horrifying images from Israel’s Gaza onslaught was the death of the four boys playing soccer on the beach. Their names are Mohamed Ramez Bakr, 11 years old, Ahed Atef Bakr and Zakaria Ahed Bakr, both 10, and Ismael Mohamed Bakr, 9. I say their names because Palestinians are so dehumanized that their deaths don’t even register to much of this country. I’m here tonight because you cannot use a basketball game to honor an army that killed those boys. It is morally bankrupt. Jews and non-Jews have an obligation to speak out.”

Mindy Gershon of the organization Adalah-NY then commented, “If you believe that we need a Boycott, Divestment and Sanctions movement to hold Israel accountable, then we need to be here when basketball teams come to play.” Gershon then looked over at the counter-demonstrators and said, “We have to hold a mirror to the faces of people who don’t believe Palestinians are human beings.”

I also spoke to Nets season-ticket holder Ahmed Eltouny, who showed up wearing a custom-made Brooklyn Nets jersey with the number 48, the year of the creation of the Israeli state, and the word Palestine along the back. Eltouny said, “When I first found out this game was happening weeks ago, it left a bad taste in my mouth and I planned on being out here. When you stage a game like this, it normalizes relations with a country that habitually ignores the United Nations and any external authority on their actions. There is a fundraiser going on right now in an NBA arena for an army that is being investigated for war crimes. How can the NBA be OK with this?”

Not all the protesting took place outside the arena. People from the organizations NYC Solidarity with Palestine and Direct Action Front for Palestine unfurled a banner in the stands during the second quarter that read, “We Are Brooklyn. Don’t Play with Apartheid #BDS.” One of the participants Amin Husain, said to me afterward, “Fans were aggressive. They snatched the banner. Security tried to escort us out, but we evaded them. Others in our group then took out a Palestinian flag and were assaulted by fans. We escaped the assaults but made it outside. We told police what happened but they did not do anything.” (Photos of the indoor protest can be seen here.)

While this was happening inside, I was also able to speak with local resident and Nets fan Ibrahim Abdul-Matin, who stopped by with his two small children and surveyed the scene. “This should be a community space,” he said to me. “Brooklyn is a close-knit community. I’m upset that the divisive vibe carried by FIDF would be brought into the place we call home.”

One Israeli counter-demonstrator named Eli, who was pointedly not using profanity or slurs, criticized the Palestinian protesters and said to me, “Why don’t they protest the deaths in Syria or the human rights abuses in Saudi Arabia or ISIS? But they have every right to be here. In the US as well as Israel you can protest and be heard, not so much in these other places.” He then looked over at the cursing young men on his side of the barricades and said, “that look doesn't go so well with my message to you.”

Also surveying the counter-demonstrators from inside the barricades was Arya Shirazi of Queens. Shirazi said to me, “When I see all that anger and that kind of behavior from those supporting FIDF, Maccabi Tel Aviv and Israel’s actions, and then I look at us, it’s heartening. Look at us. We are racially and ethnically diverse. We are young and old. We are the people, and that’s why we are going to see a free Palestine.”