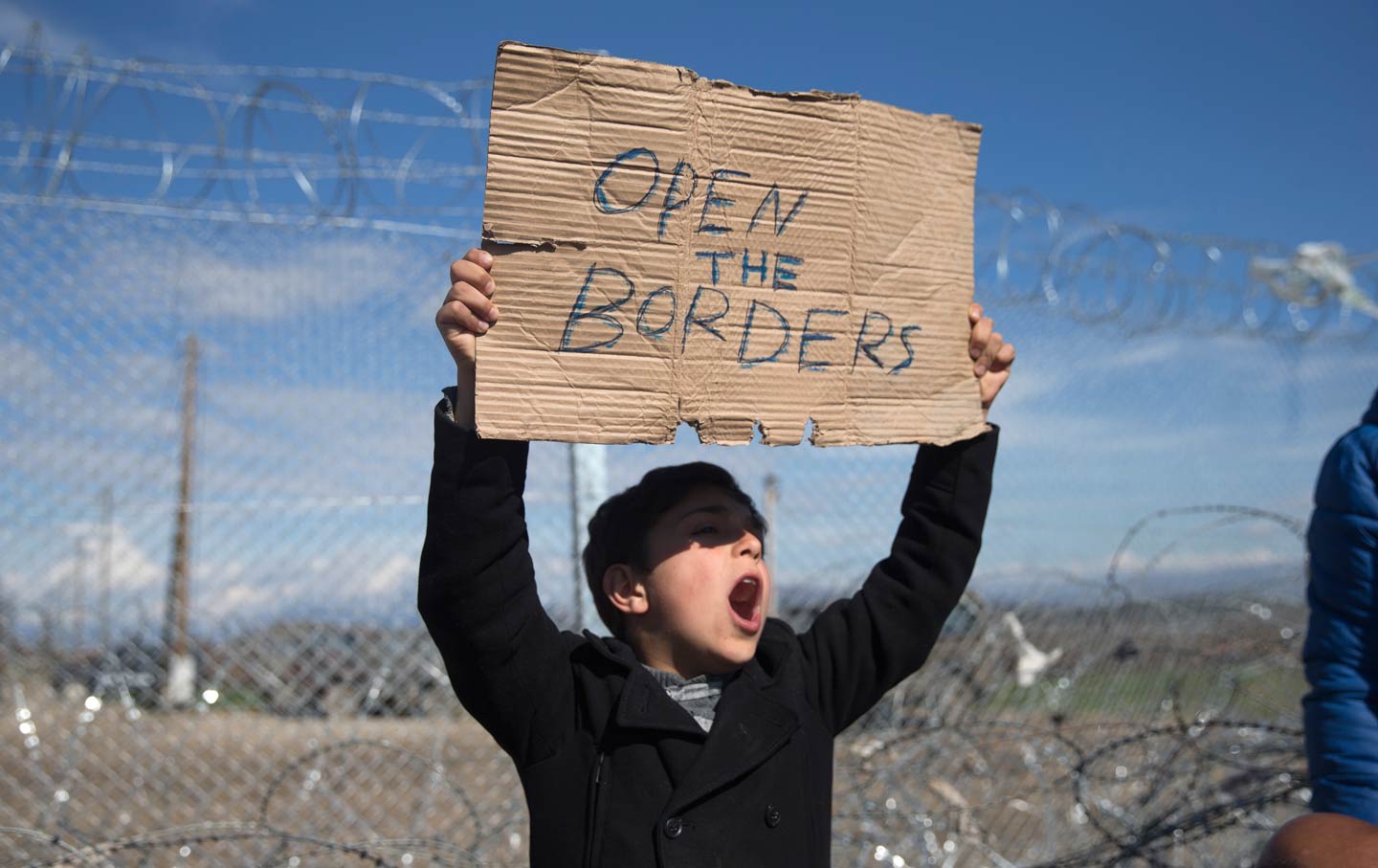 A boy takes part in a protest by refugees at the northern Greek border station of Idomeni. (AP Photo / Petros Giannakouris)

In Brussels, EU leaders and Turkish Prime Minister Ahmet Davutoglu sit at a table adorned with flowers haggling over a “solution” to Europe’s refugee and migration crisis. For most of the EU leaders, the prime concerns are saving the Schengen border-free zone and limiting the domestic political damage from the lowest point yet in the saga of Europe’s long (dis)integration. Davutoglu is there to extract the maximum possible political benefit for his increasingly authoritarian government, which is cracking down on dissent and is effectively at war with its own Kurdish citizens.

At Idomeni on the closed Greek-Macedonian border, some 14,000 souls wait in the mud for their fate to be decided in this high-level power play. Another 20,000 are trapped elsewhere in Greece, in miserable conditions despite an incredible outpouring of solidarity. Since January 1, 126,000 people have crossed from Turkey to the Greek islands packed in unseaworthy boats, 91 percent of them refugees from Syria, Iraq, and Afghanistan, 38 percent of them children. (Do the sum: That’s roughly 47,800 children.) Four hundred and twenty-eight people have drowned in the last two months. Last year, the dead numbered 3,771.

German Chancellor Angela Merkel’s plan to relocate refugees across the European Union has foundered on indifference and hostility. Of the 66,000 places pledged in September (already inadequate), only 688 have been offered and filled. Initially led by Hungary (which took it upon itself to protect “Christian Europe” by exporting razor wire for better fences) and now marshaled by Austria, Central European and western Balkan states have simply closed their frontiers, attempting to wash their hands of the whole mess. Western European leaders like France’s Francois Hollande and Britain’s David Cameron are happy to sit back and let them do the dirty work. (Cameron, who refused to take a single refugee from Greece or Italy, is now sending British warships to join a NATO force patrolling the eastern Aegean to “break the smugglers’ networks” and keep the boats from coming; this is also, of course, a move in his campaign to keep Britain in the EU and save his government.)

First morally, then politically, and finally structurally, the European Union is unraveling before our eyes, destroyed by its own contradictions and failures of solidarity. The discussion is now not even nominally about how to protect the refugees, but about how to keep them out. That depends on cutting a deal with Turkey to take back tens of thousands of refugees and migrants rejected or (illegally) pushed back by Europe. Turkey currently hosts around 2.7 million Syrians; in exchange, it wants not just money but the lifting of visa restrictions for Turkish citizens and accelerated EU accession talks.

Cutting that deal with Turkey means that the EU has to hold its delicate nose and turn a blind eye to President Erdogan’s increasingly blatant human-rights violations—just last week the government seized the country’s largest opposition newspaper, owned by Erdogan’s former ally, the US-based cleric Fethullah Gulen. Not quite as hard as it seems, you might say, given that Hungary and Poland have also broken EU rules on civil liberties and transparency and so far met with nothing more than a stiff note from the head teacher’s office, but still a hard nut to swallow. And if you set those concerns aside, you then have to face the deeper reason for Europe’s unwillingness to admit Turkey to the club. Here we are trying to keep out perhaps a million and a half mostly Muslim refugees—about 0.2 percent of Europe’s population—and we’re supposed to open the door to 77 million Muslim Turks, many of them from deepest, un-European Anatolia?

Arms will be twisted tonight at those civilized tables in Brussels, despite the fact that Turkey can hardly be regarded as a “safe third country” and the UN has questioned the deal’s legality. Among the proposals under discussion is a scheme to resettle one Syrian refugee from Turkey in Europe for each one returned to Turkey from the Greek islands; there’s no word yet about who would make the selection. Even without a deal, there’s strong pressure on Merkel to “close the Western Balkans route”—which effectively means trapping thousands of refugees in Greece. Both Merkel and European Council President Donald Tusk have pledged not to abandon Greece; the European Commission has proposed an unprecedented €700 million refugee aid package, mostly to Greece, over the next three years. But money is only money. Prime Minister Alexis Tsipras has said he won’t let his country become a “warehouse of souls,” but he may have little choice.

Greece has still not completed its latest bailout review; unemployment still stands at 25 percent. Though the so-called hot spots or migrant registration centers demanded by the EU are now being completed by the army, the country is deeply mired in a slough of depression and stagnation. So far, people on the islands and in Athens and Thessaloniki have rallied to help the people washing up on their shores, with water and food and clothing, with medical care, with human warmth, with classes for children and movies to help pass the long waiting time. This weekend, Syntagma Square became a collection point for donations; 10,000 people contributed. Many Greeks have their own refugee family history from 1922, when British ships stood by off the coast of Turkey as Smyrna burned and people drowned trying to escape the flames. Like people all over Europe who have come into contact with refugees rather than media scaremongering, their first impulse is to help. The most generous are often those with the least to give.

But of course, there are instances of exploitation and anger too. And though the neo-Nazi party, Golden Dawn, has been quieter of late, those views have not gone away. If Greece becomes Europe’s Lebanon, kept on life support in exchange for hosting giant refugee camps, the mood will eventually turn. The lightning rod for Europe’s financial crisis can’t become the lightning rod for its failure of solidarity and leadership in the refugee crisis too; it just isn’t going to work. The EU was born out of the ashes of the Second World War, but its leaders seem to have forgotten what happened after the 1938 Evian Conference and the 1943 Bermuda Conference failed to agree on safe havens for Jewish refugees. The 1951 UN Convention on Refugees, also born out of that catastrophe, is almost a dead letter. As crisis piles upon crisis with no solutions in sight, Europe, at least as we know it, may be dying too.