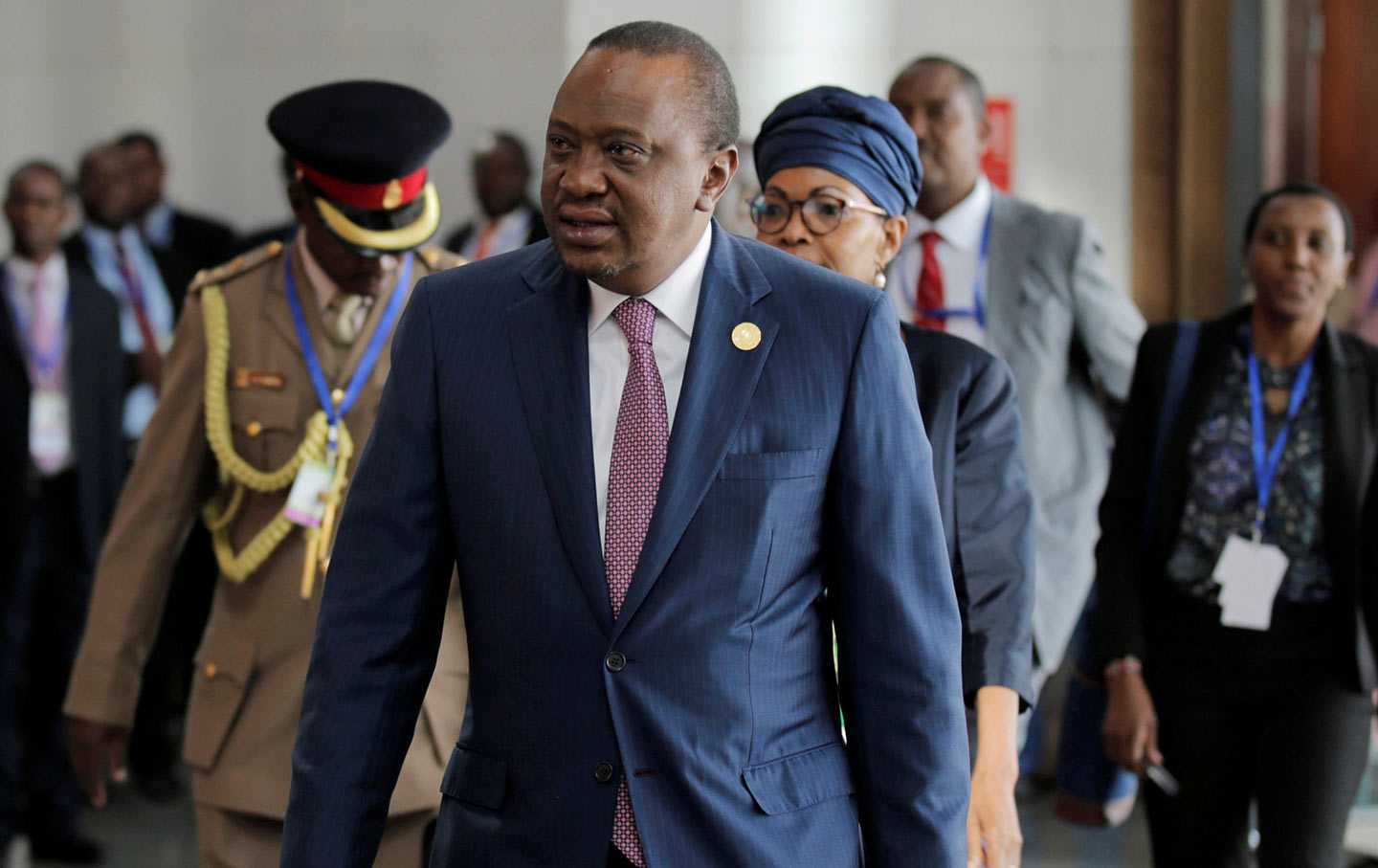 Kenyan President Uhuru Kenyatta arrives for a meeting of the Assembly of the African Union in Addis Ababa, Ethiopia, January 29, 2018. (Reuters / Tiksa Negeri)

Nairobi—A few days ago I had lunch with a longtime Kenyan friend. She’s one of the most solid people I know—not at all given to hyperbole or hysteria. So I listened hard when she told me she’s afraid that Kenya is sliding back into the kind of dictatorship that began in 1982, after an attempted coup. Then-President Daniel arap Moi responded with 10 years of ruthless suppression of dissent, followed by 10 more years of something less than real democracy, until he finally left office in 2002.

When I came back to Kenya a couple years after Moi’s departure, following an absence of more than 30 years, it was to a country that was reveling in freedom of speech. Vigorous public debates on television and outrageously opinionated columns in the daily press were the order of the day. I still remember, during the run-up to a vote on a new Constitution in 2005, witnessing a good-natured argument between two Kikuyu friends of mine with opposite positions on the issue; it made me think that even Kenya’s longstanding ethnic politics, which saw most Kenyans voting along tribal lines, were breaking down.

And dissent seemed to carry no danger: When then-President Mwai Kibaki’s side lost, the phlegmatic Kibaki took the stunning defeat in stride, reshuffled his cabinet, and moved on.

What Ten Years in Kenya Have Taught Me About the Perils of American Ignorance, ‘Aid,’ and Narcissism

Kenya’s Rescheduled Elections Are a Triumph of Constitutionalism—but How Much Has Really Changed?

Before long, however, old ethnic enmities and old antidemocratic tendencies reasserted themselves. Raila Odinga, a Luo, challenged the reelection bid of Kibaki, a Kikuyu, in 2007, but was defeated in a highly suspect poll that was followed by an outburst of violence. Two more tries by Odinga, in 2013 and 2017, both against Uhuru Kenyatta, the son of the country’s first president and now the incumbent president, and both involving flawed voting procedures, were similarly unsuccessful. In response to this latest defeat, Odinga, now 73, embittered, and with dwindling support, staged his own public swearing in as the “people’s president” on January 30, complete with an oath, a Bible, and an adoring crowd.

Kenyatta’s reaction was swift: Government officials shut down four television stations that had ignored a directive against live coverage of the event; they arrested several of Odinga’s supporters, including one who was held incommunicado for several days; and they withdrew the passports of a dozen key members of the opposition. While some of these actions have by now been reversed or softened, it’s already evident that they’ve had the desired effect of cowing the media and some of the more fainthearted of Odinga’s supporters. Moreover, the government has made it clear that this is the beginning, not the end, of its response.

There’s no question that Odinga’s January action was both foolish and foolhardy. Kenyatta is well-known for his hypersensitivity to criticism, as I know from personal experience. (While I was the public editor of one of the country’s dailies a few years ago, Kenyatta complained about me to the Media Council after I made some mild remarks about what I perceived as his overreaction to an article he didn’t like by one of the newspaper’s regular columnists.) A more confident president might well have ignored Odinga’s action or laughed it off. But instead, like Moi in 1982, Kenyatta seems to have taken it as a direct challenge to his power and embarked on a course of action that threatens all the hard-won democratic gains of the past 15 years.

And just as has been the case with similar situations in other countries, my informal soundings suggest that Kenyans as a whole are not likely to rise up in protest (this obviously doesn’t include Odinga’s core supporters). On the same day as the lunch with my friend, I had dinner with a couple my age who are educated and informed members of Kenya’s increasingly large middle class. When I asked what they thought of the closing of the TV stations, neither one of them expressed particular concern. The husband said that the stations more or less had it coming, after having been expressly warned not to provide coverage of Odinga’s action. The wife said she didn’t care if the stations never came back on, as they were always stirring people up with their coverage.

To be sure, some things have changed since 1982—most notably a judiciary that is far more independent than it was even up to relatively recently. And there are now plenty of civil-society groups that have the capacity to bring suits, stage demonstrations, and in general make noise about what’s happening.

But what I keep thinking about as I watch events in Kenya unfold is that democracy doesn’t usually die in one calamitous moment but rather bit by bit, like the frog in the pot of ever-hotter water. And what dismays me the most is the effect the situation is having on younger Kenyans, most of whom were already pretty cynical about the state of the country’s politics before the recent events.

After last year’s Kenyan elections, I had an e-mail exchange with a former student of mine at the University of Nairobi who told me he hadn’t voted because he didn’t see any point to it. In response to my argument that he had a responsibility to at least choose the lesser of two evils, he wrote: “In Kenya, the only time politicians unite is when demanding outrageous salary increments. How is one to distinguish the good from the bad in such a setting?”

When we met a few days ago in Nairobi for coffee, I told him that although I still felt it was important to vote, I had more understanding of where he was coming from than perhaps I did a few months ago. But there was really nothing more to say, so we went back to talking about his career plans and his interest in poetry.

Right now, things seem pretty bleak in Kenya, and I can’t see how this current state of affairs will end. Religious leaders, foreign officials, and others are calling for talks between Kenyatta and Odinga, but both sides seem to be completely dug in. This kind of intense polarization feels familiar to me as an American in the era of Donald Trump, but the United States at least has the advantage of stronger institutions and a longer history of coming through bad times.

One thing my latest visit has made clear is that my earlier euphoria about Kenya, in the days when I was newly returned to the country, was embarrassingly naive. Kenyans will have to find their own way through this mess, learning, or relearning, as they go that they can’t take democracy for granted. Kenya has done a lot better job on that score than many neighboring countries—or, for that matter, many other countries in the world—but the process is still likely to be painful.