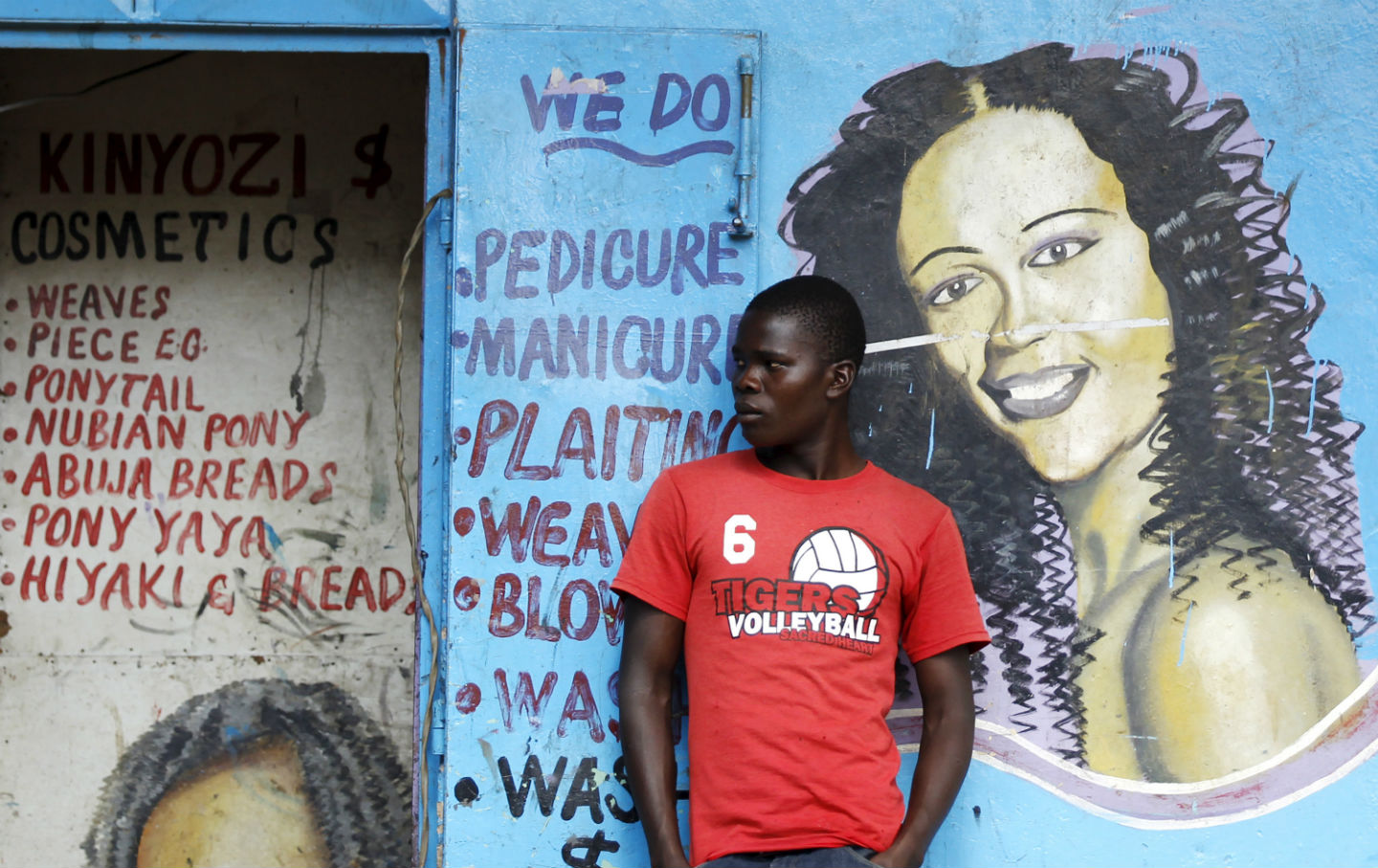 A man in the Eastleigh neighbourhood in Kenya's capital Nairobi April 8, 2015 (Reuters/Thomas Mukoya)

Diani, Kenya—The largest daily newspaper here recently published a column by a British political scientist who argued that Kenya needs “lively disagreement and debate,” rather than efforts at reconciliation, in order to move on from the 2007-08 post-election violence. The political scientist, it’s worth noting, is a recognized Kenya expert with a PhD from Oxford.

A week later, the same paper carried a furious response by two Kenyan academics, one of them a regular columnist whose opinions, particularly on cultural matters, I’ve come to admire. Their objections were numerous, but the main one boiled down to this: The British political scientist’s prescription was all wrong because she didn’t understand the importance Africans attach to community harmony.

I hadn’t done more than glance at the original column, but now, curious, I went back and read it carefully. My conclusion was that while the Kenyans might have been a little too harsh, they were right in calling out the British “expert”: Americans and most Western Europeans may revel in speaking their minds, and indeed consider “forthrightness” a highly desirable trait, but Kenyans generally prefer private consensus-building on highly sensitive matters.

All of which leads me to the first lesson I will take away from living and working in Kenya for most of the last ten years, a period now at an end, which is that differences between cultures, in particular national cultures, are so deep, and so subtle, that it’s hard for outsiders not to put their foot in it. Or, in a political context, not to make a bad situation worse.

Here’s one personal example. I was working as a consulting editor at another of Kenya’s daily newspapers when the secretary of the cabinet had a major heart attack. At the morning news meeting the next day, I suggested that given how serious the situation appeared, the paper ought to have a story on the leading candidates to replace him. The idea was greeted with such an uncomfortable silence that I dropped it. Later, one of the senior editors explained that in Kenya, it’s considered impolite to even hint that someone might die.

I was deeply embarrassed; here I was, several years into my second stint of living in the country, and I was still failing to pick up on fairly basic social mores.

If individuals can get things so wrong because of a lack of cultural understanding, so can governments—and with far more serious consequences. Soon after the Islamic Courts Union (a loose coalition including businessmen and clerics) emerged in Somalia a few years ago and began to gain support for its success in bringing stability to the southern parts of the country, the United States decided the ICU was a terrorist group. Before long, Washington was sending suitcases full of cash by plane from Nairobi to a group of opposition warlords and encouraging Ethiopia to crush the ICU, which it did. And then what happened? With the leadership of the movement having fled or been killed, the ICU’s radical youth wing morphed into al-Shabaab, which has since killed at least 350 Kenyans and foreigners in attacks at the Westgate Mall, Garissa University, and elsewhere, and is now allied with Al Qaeda.

What I take from that series of events is that in Somalia, as in Afghanistan, the United States didn’t know enough about the players or the culture to make an intelligent intervention and would have served itself and Somalia better by doing nothing.

A second lesson I’ll take away from my years in Kenya is that a lot of “development” aid, both from governments and private charities, is of dubious value—unless you regard the dollars that aid workers spend on safari lodges and good restaurants as a useful contribution to GDP. Sometimes, in fact, I’ve wondered whether, all things considered, such aid does more harm than good.

One reason is that aid focuses too often on donor priorities rather than local ones. Yes, I support “gender equality” and “youth empowerment,” but it seems to me it’s far more important, in a country where many parents can’t afford to take their children to a doctor or to educate them beyond primary school, to concentrate on creating jobs. A few years ago, at a gathering at Harvard’s Kennedy School, a young graduate student working on a master’s degree in international development told me she wanted to “help” Kenya and asked what I thought would be the best way. I suggested she quit her program, get an MBA, and start a company in Kenya that in time might employ hundreds of people. She looked shocked, then disapproving, and quickly moved away.

Another reason I have questions about aid is that it too often leads to “donor dependency.” An acquaintance of mine in Nairobi told me a story about a trip she’d made to a rural area where she’d had a conversation with a group of farmers about their need for mechanized equipment to make their farms more efficient. Why, she asked them, don’t you get together and save until you can jointly buy a tractor? No, was the reply; we are waiting for the donors.

And then there’s the cost to Kenya of being portrayed by those seeking to raise aid money as “starving Africans.” What business, after all, wants to invest in a country where it believes there are few if any people with enough money to buy its products? Even my own two sons expressed surprise, when they came to visit, at the lack of malnourished children and the prevalence of shopping malls filled with Kenyan consumers. “When you’re fundraising you have to prove there is a need,” the head of one large US nonprofit organization told me. “Children starving, mothers dying. If you’re not negative enough, you won’t get funding.”

I am far from the only one with questions about aid. A couple of years ago, my husband asked a Swedish friend who’d recently retired after a career as a high-level UN aid official why he didn’t now parlay that into consulting work. Because, the friend told us, he had serious reservations about the value of his work, and if the impact had actually been negative, as he feared might be the case, he didn’t want to compound the error.

The final lesson I’ll take away from my years in Kenya is that America isn’t the center of the world—a fact which of course I had known, but which I didn’t fully internalize until I lived here. From my previous vantage point in the United States, I saw New York and Washington, DC, as the world’s most important cities, and US opinions on anything ranging from climate change to pop music as, when you came right down to it, the only ones that really mattered. Now, when I stand on the beach ten minutes from my house and pretend that if I look straight ahead I can see Indonesia, I recognize that webs of connection radiate from here, as from all countries, in many different directions.

Take India. My phone company here is owned by an Indian multinational, and many Kenyans go to India as medical tourists. China looms large, too: Chinese engineers are visible around the country working on road construction while Chinese educators teach Mandarin to young Kenyans eyeing possible careers in tourism or commerce. Dubai is for making plane connections, and, if you have money, for spending it. Australia is for further education. And when it comes to culture, there’s France: many young people in Nairobi have developed an enormous love of all things French thanks to Alliance Francaise, the best place in the city to see free films, work by new artists, and live musical performances.

In contrast, America is relatively remote. When I was here years ago, as a Peace Corps teacher, there was a US-sponsored library where Kenyans could go and read American magazines and American college catalogues. These days, that library is long gone and the US embassy is so far out of town and so ringed with gates and walls that you feel as though you’re going into a prison when you visit it. President Obama’s planned visit in July will certainly be a big event, but it won’t change the fact that while Kenyans are very interested in what’s happening in America, their day-to-day concerns are much broader and more complex.

One related realization that I’ll carry back to America is that there is no such thing as American exceptionalism. Americans may believe in it—heck, even now, despite my best efforts, a tiny bit of me still believes in it, too—but I’ve realized in my time here that few people in the rest of the world do. In particular, no one takes seriously Americans’ ultimate fall-back line, which is that even when we screw up, it’s from a misguided but well-meant effort to make the world a better place. When I was here years ago, many Kenyans were critical of the US war in Vietnam, seeing it as a continuation of colonialism; today many are critical of US policy in the Middle East, tied as it is to oil. I now accept, reluctantly, that America is no better or worse than a lot of empires that have come before. In fact, we’re kind of ordinary, apart from the fact that unlike most Kenyans I know, we believe our own PR.

The first time I left Kenya, in 1968, I cried so much on the plane trip to West Africa that the Liberian education official in the seat next to me felt compelled to try to cheer me up by inviting me to visit him and his family. I didn’t take him up on his offer, but I’ve always remembered how guilty I felt for not telling him that the real reason I was crying was not, as I explained to him, that I loved Kenya so much, but that I felt Kenya didn’t love me back. Or more correctly, that while I loved Kenya, Kenya was pretty much indifferent to me and wouldn’t even notice my going.

Now, as I prepare to say goodbye to Kenya again, I’ve been thinking a lot about that first parting. I’m quite sure the country won’t notice my departure any more this time than it did the first time, but now I realize that that’s as it should be, and I’m fine with it.

Still, I’ll be sad—sad to leave good friends and sad to say goodbye to a place where I continue to learn something new every day. At the same time, of course, I’ll be happy to be back in the United States with the family and neighbors I left behind. But will I be home? Will I be at home? I don’t know the answer to that question, and maybe I never will.