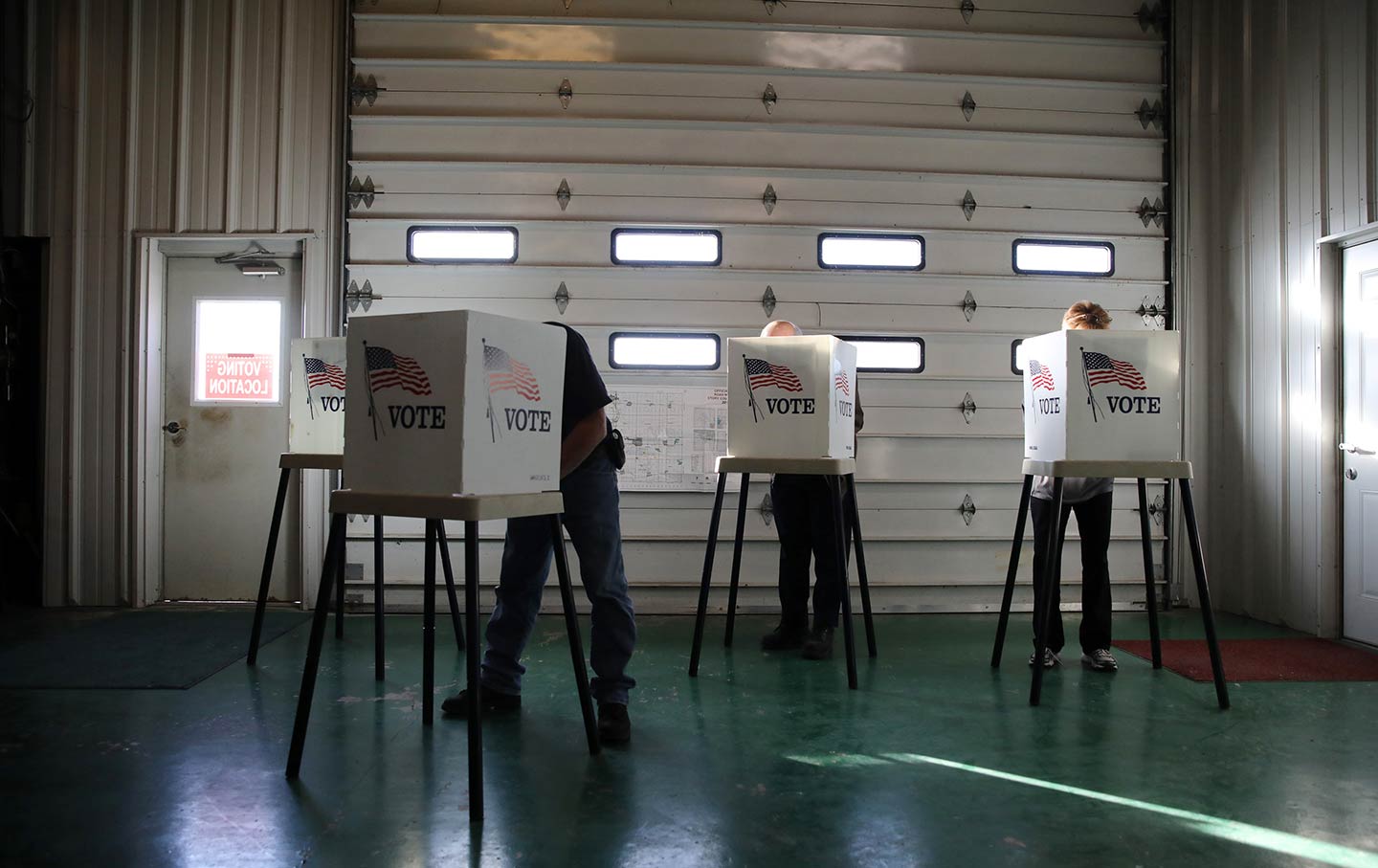 Voters cast ballots in polling station located in a farm shed during the US presidential election on November 8, 2016. (Reuters / Scott Morgan)

My grandmother Sylvia moved from Brooklyn to Iowa when she was 89 years old. It was a culture shock, to say the least. When my mom took her to vote, she complained of the candidates, “There isn’t anybody who’s Jewish!”

I thought of my grandmother, who passed away in 2005 at 99, when the Iowa Legislature passed a strict voter-ID law today. She didn’t have a driver’s license because she never drove (she’d frequently walk two miles from her apartment to the grocery store). Her passport expired long ago. She never had a US birth certificate because she was born in Poland and fled the Holocaust. She used her Medicare card as identification. She didn’t possess any of the forms of government-issued photo identification that Iowa will soon require to vote.

The ACLU of Iowa reports that 11 percent of eligible Iowa voters—260,000 people—don’t have a driver’s license or non-operator ID, according to the US Census and the Iowa Department of Transportation, and could be disenfranchised by the bill. My grandmother, if she were still alive today, would have been one of them.

There’s no evidence the new law is necessary. Iowa has some of the best-run elections in the country. There were only 10 alleged cases of fraud out of 1.6 million votes cast in 2016 and no cases of voter impersonation that a voter-ID law might’ve stopped. The only conviction was a Trump supporter who voted twice because she thought the election was rigged and her first vote wouldn’t count. “We’ve not experienced widespread voter fraud in Iowa,” admits Secretary of State Paul Pate, the architect of the bill. (However, Pate still pushed misleading fraud stats over the objections of his own staff.)

Yet Iowa Republicans, who now control state government for the first time in two decades, say the law is necessary to combat the “perception” of fraud—a perception created by Republicans who alleged for a decade without evidence that such fraud was widespread. “It is true that there isn’t widespread voter fraud,” State Representative Ken Rizer told The New York Times. “But there is a perception that the system can be cheated. That’s one of the reasons for doing this.” The fact that Republicans are pointing to the mere “perception” of fraud as a reason to disenfranchise thousands of voters shows why Trump’s baseless assertions that millions are voting illegally is so damaging.

The county auditors who run Iowa’s elections say the system works just fine and testified against the bill. “Our system is incredible here in the state,” said Johnson County Auditor Travis Weipert of Iowa City. “Incredible. We have 99 auditors who work their tails off…. The system works perfect and they are trying to fix a problem that isn’t there.”

Secretary Pate says no one will be disenfranchised by the law because the state will mail new ID cards to the 85,000 active registered voters without one. But that doesn’t include the much larger number of eligible voters, 260,000, who don’t have strict voter ID. Not to mention the 57,000 out-of-state students who might not be able to vote because student IDs aren’t accepted. Or the fact that Iowa will spend at least $1 million implementing the new law at a time when there’s a $118 million budget shortfall in the state.

“Iowa has some of the best elections in the country with some of the highest rates of voter participation and zero indication of any voter-impersonation fraud,” says Rita Bettis, legal director of the ACLU of Iowa. “But under Secretary Pate’s voter-ID bill, voters would be confused, lines would be longer, and some voters simply would not have their ballots counted because they lack a narrow class of three acceptable photo IDs.”

There’s also a stark racial disparity: In Waterloo’s Black Hawk County, for example, “African-Americans make up 27 percent of voting-age residents who lack an Iowa driver’s license, but only 10 percent of all voting-age residents,” according to the ACLU. In addition, the law “effectively ends” Iowa’s popular system of Election Day registration for those without voter ID. “That’s because for those people who don’t pre-register 11 days before the election and who don’t have one of the three forms of ID, they won’t be able to get a ‘free ID’ mailed to them in time,” according to the ACLU. (In addition to voter ID, the bill also cut early voting and banned straight-ticket voting.)

Iowa, which went for Obama twice before Trump, is one of the first states in 2017 to pass a new law making it harder to vote, but it likely won’t be the last. So far in 2017, 87 bills have been introduced in 29 states to restrict access to the ballot, according to the Brennan Center for Justice. (And that’s on top of the 21 states that already passed new voting restrictions since 2010.) Arkansas recently passed a new voter-ID law, similar to the one that was unanimously struck down the Arkansas Supreme Court in 2014. New Hampshire has tightened residency requirements for those using same-day registration and even proposed that local police would knock on doors to verify addresses. Georgia is now requiring that information on voter-registration forms exactly match state databases or ballots might not be counted.

In early March, the Iowa House passed a bill severely loosening the state’s gun-control laws. (Republicans have also introduced legislation to defund Planned Parenthood, ban abortions after 20 weeks, gut collective bargaining for unions, and reinstate the death penalty.) “House File 517 lets kids use guns, legalizes sawed-off shotguns, allows guns in city council meetings and gives vigilantes a stronger excuse for shooting someone down on the street,” according to Des Moines Register columnist Kathy Obradovich. The GOP’s argument: The state shouldn’t be restricting a fundamental right. Somehow that same argument doesn’t apply to voting, the most fundamental right in a democracy. “The number of people killed in the United States by firearms each year is about 33,000,” wrote Obradovich. “The number of people killed by voter fraud each year is zero.”

My grandmother never owned a gun, but she voted.