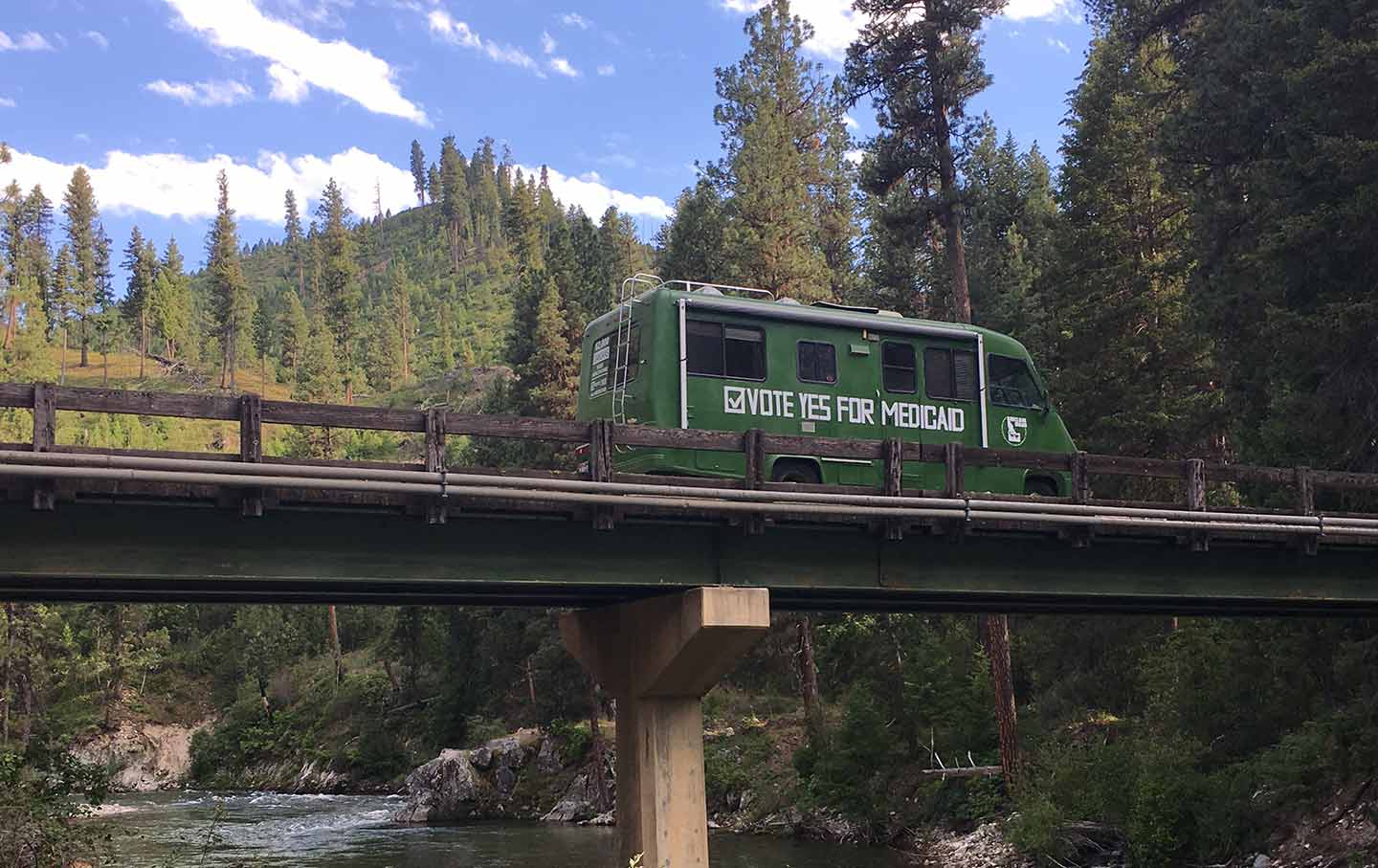 Reclaim Idaho spent months touring the state in a camper van to get Medicaid expansion on the ballot. (Reclaim Idaho)

For years, more than 334,000 people in Nebraska, Utah, and Idaho have been locked out of Medicaid, the health-insurance program for low-income Americans, by state leaders who refused to expand their programs under Obamacare. But in November, voters have a chance to change that. Measures to expand Medicaid are on the ballot in those three states, and also in Montana, where a temporary expansion passed in 2015 is about to expire.

If the measures succeed, “It will be an enormous leap forward in the health of working families in these states. By some measures it would be the single biggest leap forward since the original enactment of Medicaid,” said Luke Mayville, co-founder of Reclaim Idaho, the grassroots group that led the effort to put expansion on that state’s ballot.

The expansion of insurance coverage via Medicaid is one of the Affordable Care Act’s most obvious successes. While many states previously restricted Medicaid to the very poorest families, the ACA raised the threshold of eligibility for Medicaid to anyone making 138 percent of the federal poverty level, and provided billions of dollars to states to shoulder the bulk of the cost of doing so. More than 10 million people gained health insurance because of the expansion—millions who had a new chance of obtaining preventive care, addiction treatment, and life-saving procedures without bankrupting their families. 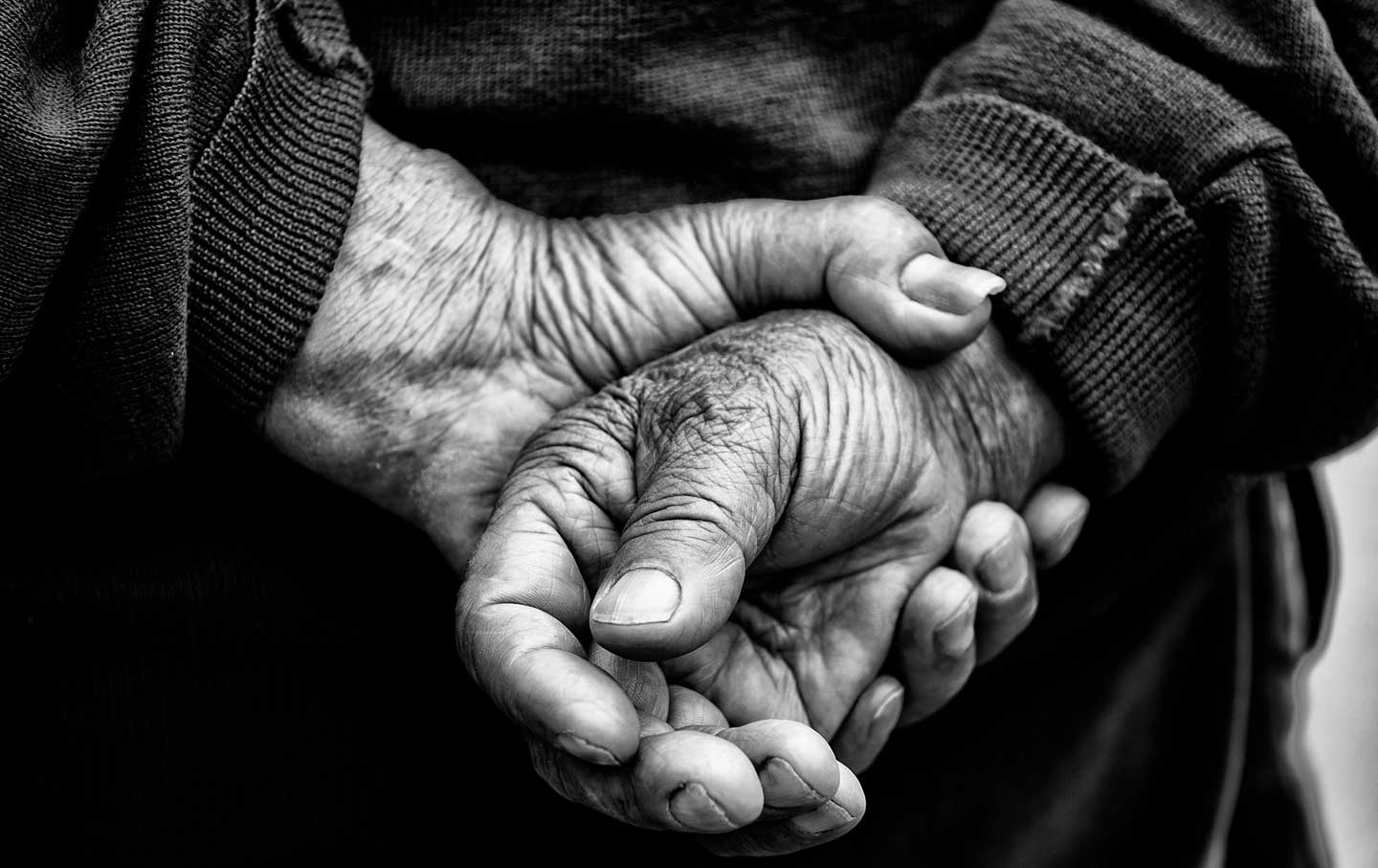 The Body in Poverty

But in 2012 the Supreme Court ruled that states were not legally required to expand Medicaid. As of September 17 states, most of them under Republican leadership, still have not done so. That’s left some 2 million people in a coverage gap: They make too much to qualify for their states’ traditional Medicaid programs, but not enough to get insurance through Obamacare’s individual marketplace.

To circumvent the legislative roadblocks, health-care advocates have turned to ballot measures. Last year Maine voters overwhelmingly passed an expansion initiative, though Governor Paul LePage has refused to implement it, sparking an ongoing legal battle. This year, after months-long grassroots efforts, similar measures are on the ballot in some of the country’s most conservative states—in Idaho and Nebraska, where Republican leaders have repeatedly resisted expansion; in Utah, where the Republican governor signed a “partial” expansion law but has not received approval from the Trump administration to implement it; and in Montana, where a temporary expansion is set to expire next year, potentially stripping insurance coverage from nearly 100,000 people.

Idaho has one of the strictest Medicaid eligibility thresholds in the country: A parent with one child must make less than $3,468 per year to qualify. In order to get expansion on the ballot there, volunteers with Reclaim Idaho traveled throughout the state for months, through cities and remote small towns, in a kelly-green camper van that became a sort of unofficial mascot, gathering the necessary signatures. “We started in the far-northern part of the state, a nine-hour drive away from Boise,” said Mayville. “I think we communicated from very early on that this really is a citizens’ initiative and this isn’t just another round of partisan fighting. There are new voices coming into the debate and those voices are coming from ordinary people who care enough about this to do something about it.”

Though the Idaho Republican Party reaffirmed its opposition to expansion earlier this year, support for the measure isn’t limited to Democrats. State Representative Christy Perry, a four-term Republican, is the co-chair of the campaign backing the ballot measure. She argues that Medicaid expansion is the “most effective and efficient way of delivering health care, and fiscally responsible”—as well as the moral thing to do. That the issue made it onto the ballot is itself significant, Perry noted. Ballot measures are a tough vehicle for change in Idaho, in part because of stringent requirements for signature collection. “The fact that the public has stepped forward, I think that’s really very telling. Our communities have watched people play political football with the issue and they were having their friends and family and neighbors die for lack of health care, not only in Idaho but in a number of states,” said Perry. “It speaks of a frustration on the part of the public that their government was not able to come up with a solution.”

Although the states voting on Medicaid this year are among America’s most conservative, they also have high percentage of residents living in rural areas, which have been particularly hard-hit by the Medicaid gap. Rural communities generally tend to be sicker and face more barriers to accessing health care than urban populations. Rural hospitals have closed at a faster rate in states that have refused to accept expansion. Conversely, a new analysis from Georgetown University’s Center for Children and Families and University of North Carolina’s NC Rural Health Project found that in states that have expanded Medicaid, rural communities benefited the most. Overall, the percentage of rural residents without insurance has dropped from 35 to 19 percent in expansion states.

Polling on the ballot measures is limited, but surveys in Idaho and Utah show momentum on the side of expansion. Compared to the large, organized coalitions of health-care groups and citizen activists who did the legwork to get expansion on their states’ ballots, opposition has been muted. The measure in Nebraska survived a lawsuit seeking to block it. State chapters of Americans for Prosperity, the conservative group funded by the Koch brothers and which poured millions into persuading Republican legislatures to reject Medicaid expansion, are fighting the measures, but so far the group’s opposition has amounted mostly to op-eds placed in local newspapers and volunteer phone banks. Nevertheless, advocates are wary of last-minute infusions of conservative cash and negative-ad blitzes. Heather Williamson, the Utah director of AFP, recently told The New York Times that her group is “ramping up our efforts against the ballot initiative.”

Montana’s Medicaid initiative faces another deep-pocketed opponent: Big Tobacco. There, the expansion would be largely paid for by a tax on tobacco products. The parent corporations of Philip Morris and R.J. Reynolds—which manufacture Marlboros and Camels, respectively—have contributed more than $9 million to a political group opposing the ballot measure; the money has been used to launch a massive television, radio, and digital ad campaign across the state. Advocates for the ballot measure say the ads are deliberately misleading—for instance, the tobacco-backed group describes the measure as “a massive new tax increase,” though the taxes would only be paid by tobacco users.

“Big tobacco is again telling lies that put lives at risk,” said Jonathan Schleifer, executive director of the Fairness Project, a national group that is backing the four Medicaid ballot initiatives. “Voters in Montana will have a clear choice: Side with their neighbors who need access to health care or side with tobacco companies that have killed millions of people. You don’t need a poll to know health care is more popular than cancer.”

Medicaid expansion is also at play in states where it’s not explicitly on the ballot. In Florida, where more than half a million people fall into the coverage gap, the Democratic candidate for governor, Andrew Gillum, is running on a health-care platform that includes expanding Medicaid. In Georgia, Democratic gubernatorial candidate Stacey Abrams has said that the first thing she’d do if elected is expand Medicaid. (Gillum and Abrams’s Republican opponents oppose expansion.) “You’ll hear me talk about this ad nauseam because it’s the only answer to Georgia’s challenges,” Abrams said at a press conference earlier in September.

Back in Idaho, the coalition backing the ballot measure is aiming to talk with 100,000 voters before Election Day. “People in Idaho have been struggling with this Medicaid gap crisis for six years now, and they’ve seen over and over again their legislators fail to do anything about it,” said Mayville of Reclaim Idaho. “They see our campaign as a break from that pattern.” Still, he added, they’re not taking anything for granted.