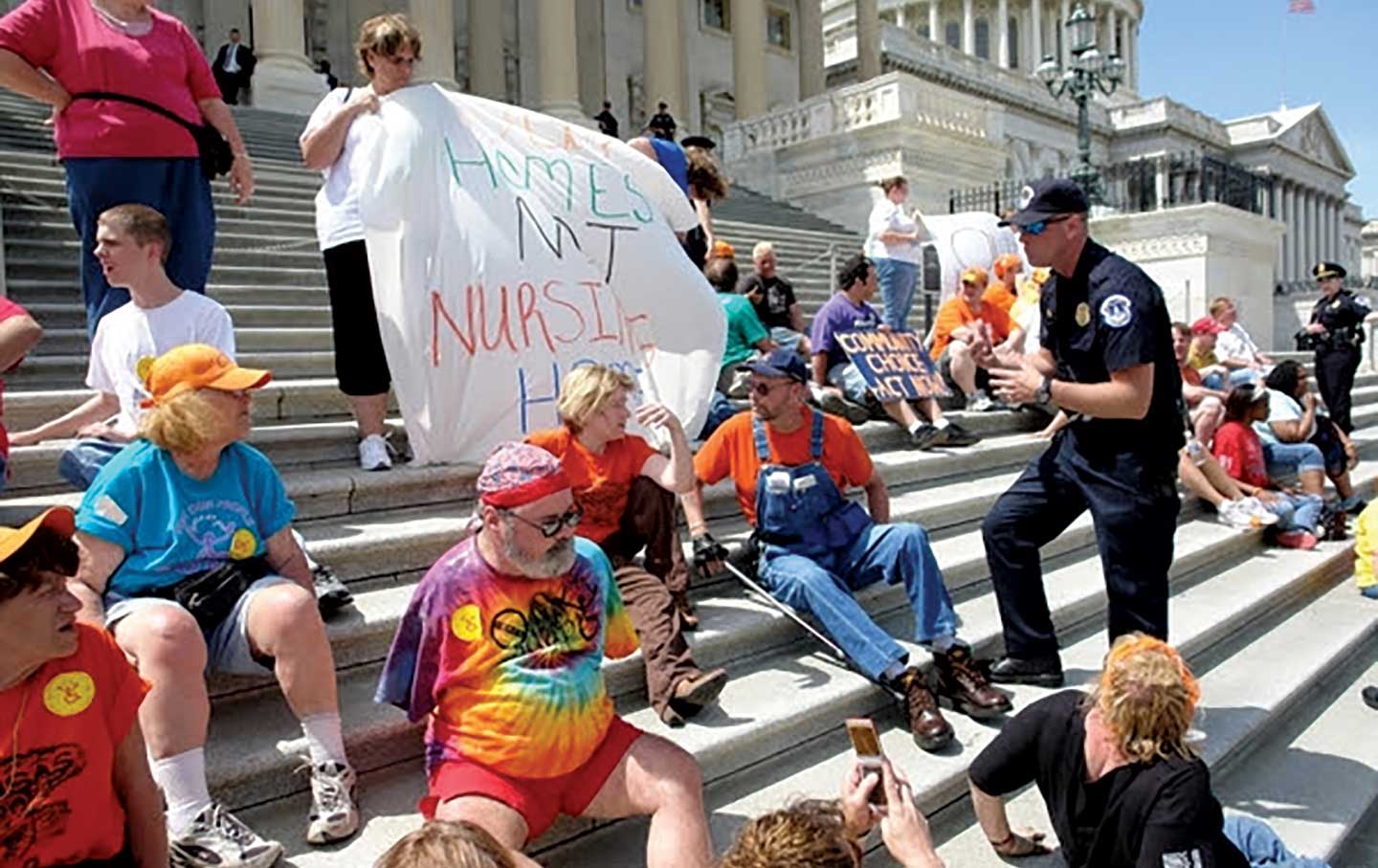 One morning last June, as Senate Republicans worked feverishly to gut the Affordable Care Act, about 60 people, many of them in wheelchairs, entered the Russell Senate Office Building by separate doors so as not to attract attention from the Capitol Police. They converged on the office of Senate majority leader Mitch McConnell and proceeded to raise hell. “No cuts to Medicaid! Save our liberty!” the protesters chanted; some got out of their wheelchairs and lay down on the floor. The day’s news reports were filled with shocking pictures of police officers carrying away disabled activists, some of them handcuffed with zip ties.

Organized by the disability-rights group ADAPT, the “die-in” at McConnell’s office, as well as dozens of similar actions throughout the spring and summer at congressional offices from Fairbanks, Alaska, to Orlando, Florida, pulled back the curtain on the GOP’s plans to repeal the Affordable Care Act. Deep cuts to Medicaid buried in the legislation would have been particularly devastating to disabled Americans, since the program helps many pay for at-home services, thus keeping them out of institutions. “If we lose our health care, people with disabilities in particular will begin to die, because we won’t have access to doctors and to the services and supports that keep us alive and independent,” explained Anita Cameron, a 31-year ADAPT veteran and one of the 43 people arrested at McConnell’s office.

ADAPT’s history of activism reaches back to the 1970s and is rooted in the community’s efforts to escape nursing homes and live freely in the wider world. Using confrontational, nonviolent tactics inspired by the civil-rights movement, the group focused initially on access to public transit. In the summer of 1978, disability activists in Denver surrounded and “seized” two city buses—few of which had wheelchair lifts at the time—during the morning rush hour, then slept on the pavement overnight, preventing the buses from moving for two days. Other early actions included smashing up curbs with sledgehammers in an effort to secure ramps at crosswalks, as well as a demonstration in Washington, DC, where activists abandoned their wheelchairs to crawl up the Capitol steps. That action led to one of the group’s major victories: the Americans With Disabilities Act, enacted in 1990.

The Resistance to Trump Will Be Local

For Zephyr Teachout, Losing an Election Was Just the Start of a New Fight

“We have been written off politically as a group of folks who can’t get anything done and aren’t really important to the political discourse,” said longtime organizer Bruce Darling, who worked out the logistics for the takeover of McConnell’s office. ADAPT’s role in turning the tide of public opinion decisively against the GOP’s plans to repeal the Affordable Care Act last year should dispel that notion. And you can count on ADAPT to be ready the next time legislators take aim at health care. “We are certainly prepared to fight for as long as it takes, and I don’t see this ending anytime soon,” promised Cameron, who by her own count has been arrested more than 130 times. “When they say ‘life, liberty, and the pursuit of happiness’—we want that.”