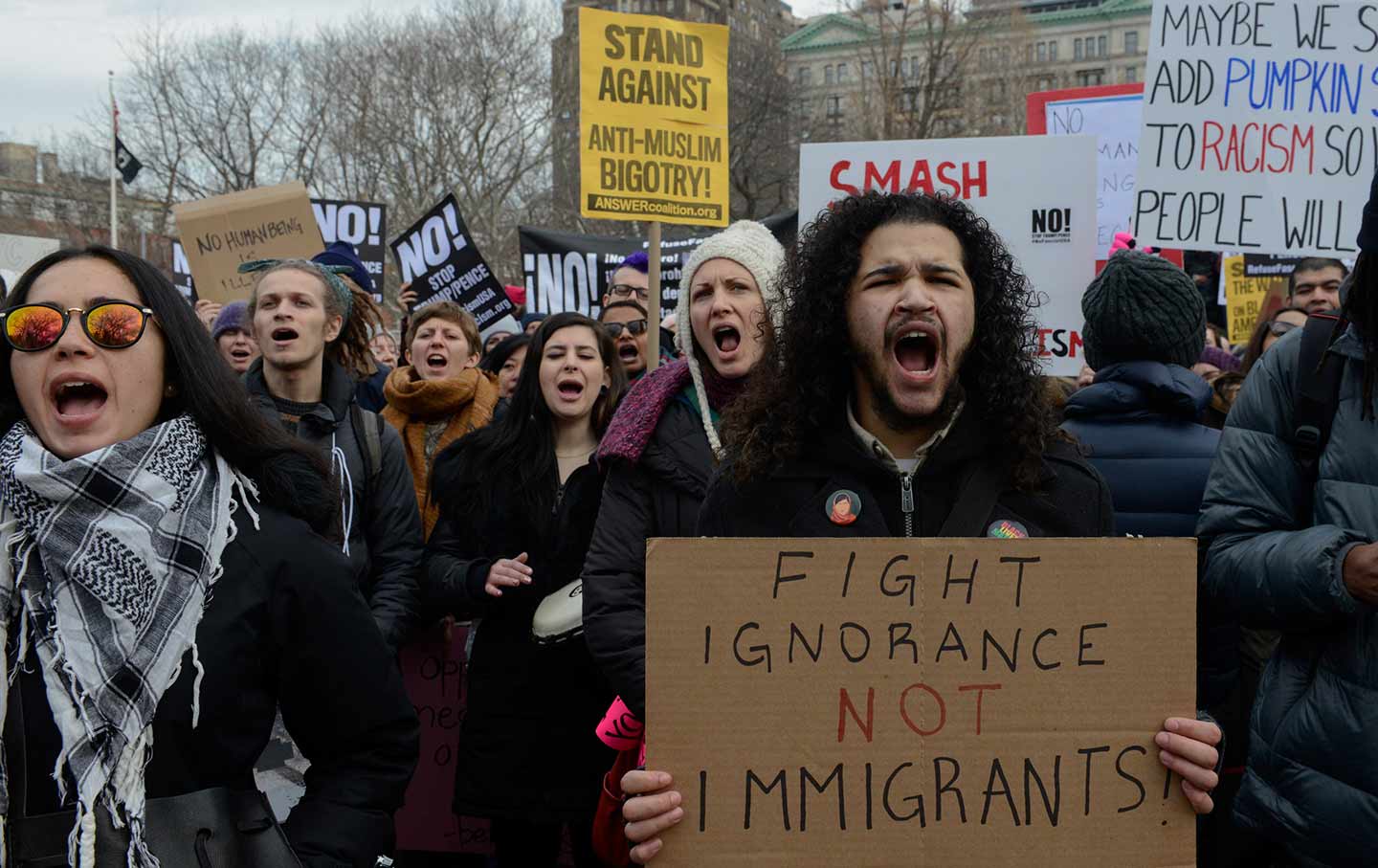 In New York City on February 11, 2017, people participate in a protest against US President Donald Trump’s immigration policy and the recent ICE raids. (Reuters / Stephanie Keith)

“The focus of these operations is no different than the routine, targeted arrests carried out by ICE’s Fugitive Operations Teams on a daily basis,” ICE spokesperson Rachael Yong Yow told The Nation on Sunday.

In other words, ICE considers this week of high enforcement activity business as usual. But sorting out what’s business as usual in the dawning days of the Trump administration is the vexing question before immigration watchers now.

The Trump administration did not invent the concept of immigration raids, after all. Some of the most high-profile were undertaken during George W. Bush’s administration; his ICE agents arrested more than 1,600 immigrants in the final years of his tenure by staging terrifying raids on meat-processing plants in rural Midwestern states. One 2008 raid in Postville, Iowa, ended with the arrest of 400 undocumented immigrants.

And of course, President Obama presided over record-breaking deportations as president—often without the use of the headline-grabbing scare tactics that the Bush administration favored. Determining whether this past week’s efforts are more akin to the raids of the Bush era or the enforcement sweeps of Obama’s—or if they mark the beginning of something brand new altogether—is what’s harder to parse.

What’s different now, in 2017, is that, aided in part by the massive detention and deportation machinery set up by the Obama administration, President Trump has not had to do much to further codify his animus toward immigrants into actionable policy. His January 25 executive order follows a decades-long trend of expanding the classes of offenses that can render a noncitizen deportable.

Now, under Trump, ICE agents have been directed to focus not just on undocumented immigrants who have been convicted of serious crimes, as the Obama administration sought to do in its final years. Trump has ordered ICE to also pursue those who “have committed acts that constitute a chargeable criminal offense,” including immigration crimes like entering and re-entering the country illegally—which as of 2016 now accounts for more than half of all federally prosecuted crimes.

The order also includes offenses like driving without a license or using a fake Social Security number to work or file taxes. In other words, the very actions that are inextricably linked to being unauthorized. Trump’s executive order also empowers immigration agents to pursue any unauthorized immigrant who “otherwise pose[s] a risk to public safety or national security” based on nothing more than that individual immigration officer’s personal “judgment.”

These changes massively expand the powers of immigration agents and widen the net of undocumented immigrants who now could be prioritized for deportation.

Because of this, immigrants have already been on high alert. Immigrant-rights groups began holding know-your-rights trainings almost immediately after Election Day. On Thursday afternoon, rumors and reports spread that ICE agents in Los Angeles were staging checkpoints at traffic stops and that immigration agents were descending on neighborhoods and conducting sweeps. The information spread over Facebook and Instagram and Twitter in easily shareable meme and “please copy and paste” posts, often by activists and allies.

The flurry of posts came just hours after activists in Phoenix staged a 15-hour protest to attempt to stop the deportation of an undocumented immigrant. Guadalupe Garcia de Rayos, a mother and 21-year US resident, had been checking in yearly with immigration officials after she was swept up in a raid in then–Maricopa County Sheriff Joe Arpaio’s notorious raids. She had never been a priority for deportation until last week, when she was ultimately deported. To her supporters, Garcia de Rayos’s deportation was proof of the beginning of the harsh changes under Trump’s regime.

But not all law-enforcement activity is proof of an ICE raid. On Saturday, Desis Rising Up and Moving, a Queens-based organizing group in New York City, urged supporters over Facebook not to share unsubstantiated reports. “Spreading such reports online is causing more damage than helping people,” DRUM wrote on its Facebook page. The group sent organizers out to confirm the social-media rumors, only to find that the activity “so far turned out to be the usual abuse meted out by police. Not ICE.”

The danger of spreading false reports, DRUM said, is that “people stop going to work, sending their children to school, leaving their homes.”

Indeed, many of those purported checkpoints turned out to be mere rumor.

On Friday evening, ICE, responding to conflicting reports of the scale of its operations, admonished those who shared “false, dangerous and irresponsible” reports of “ICE checkpoints and sweeps.” Agency officials said “those reports create mass panic and put communities and law enforcement personnel in unnecessary danger,” adding that people who “falsely report such activities are doing a disservice to those they claim to support.”

It’s an odd statement to come from the agency responsible for carrying out the president’s deportation agenda. This past week’s operations may not have included checkpoints or even “sweeps,” but they were coordinated, and also highly publicized. They are part of the president’s immigration agenda.

The memes by themselves are not responsible for creating the “mass panic” that ICE now condemns. It is President Trump’s own rhetoric, words, and policies that do.