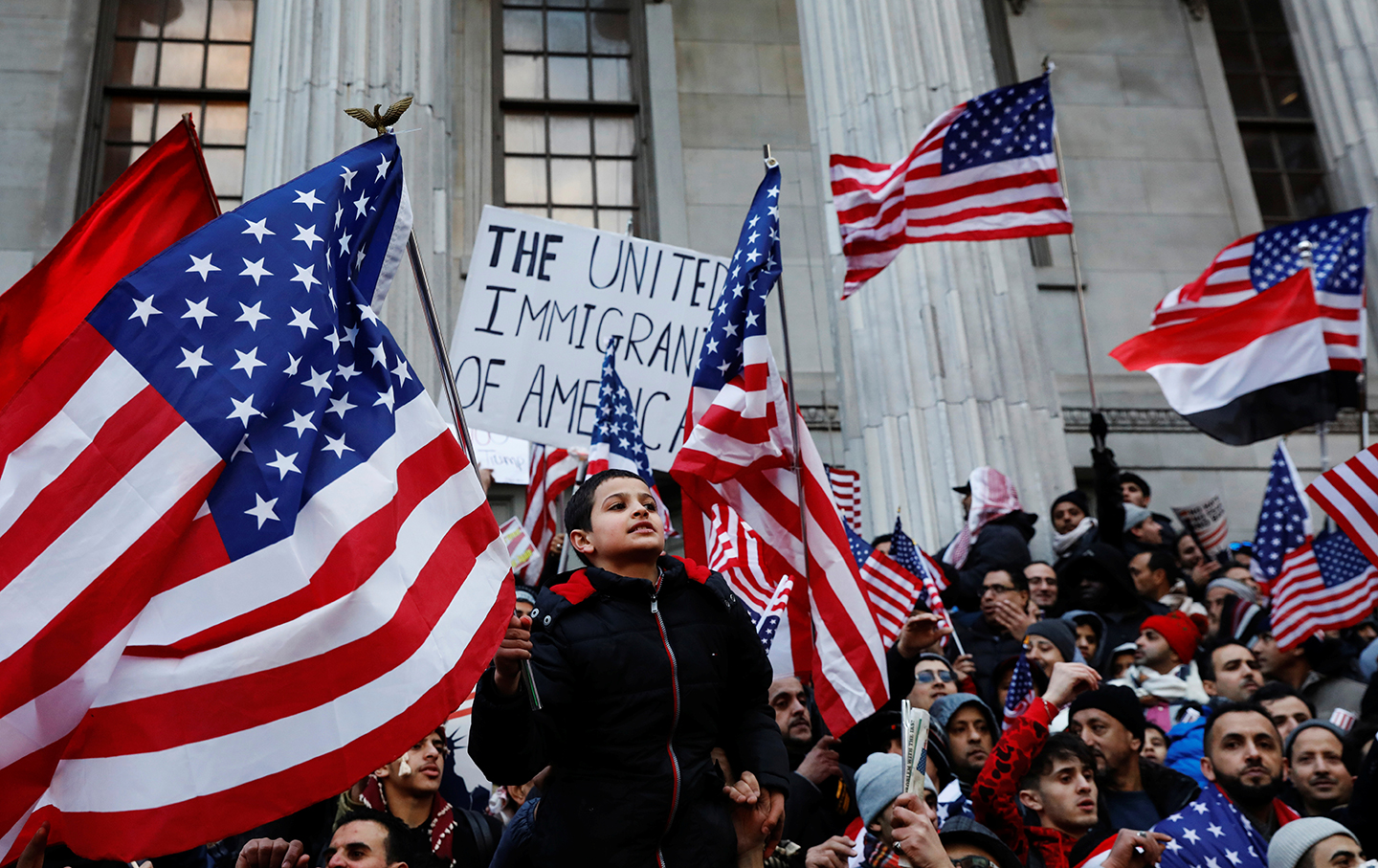 The people of New York know a bit about how to handle Donald Trump. After all, they’ve been doing battle with the real-estate magnate since he first launched his Manhattan empire in the 1980s. So the new celebrity presidency won’t intimidate the metropolis that he has spent a lifetime trying, and failing, to conquer.

When the Trump White House dropped the executive order double-bombshell last week of the border wall and the Muslim migration ban, the city sprang instantly into action—righteously shocked but refusing to be awed.

The city’s cab drivers, many of whom represent a diverse Muslim-American diaspora, including the Muslim-majority countries Trump’s order targeted, protested at JFK airport, which soon became a symbolic ground zero for resistance against the ban and the wall. The New York Taxi Workers Alliance (NYTWA) responded to Trump’s actions with a statement of resistance and called for a strike:

As an organization whose membership is largely Muslim, a workforce that’s almost universally immigrant, and a working-class movement that is rooted in the defense of the oppressed, we say no to this inhumane and unconstitutional ban…. Drivers stand in solidarity with refugees coming to America in search of peace and safety and with those who are simply trying to return to their homes here in America after traveling abroad.

The group both denounced Trump’s executive orders and rebuked his new Silicon Valley pal—Uber CEO Trevor Kalanick. Not only does Uber’s rideshare business model—which has expanded globally by shredding local regulations and reducing once-stable driver livelihoods into precarious “gig work”—align with Trump’s anti-government worldview; Kalanick’s participation in Trump’s economic advisory committee has revealed how the fresh-faced tech world is more embedded in the establishment than its “progressive” image suggests.

Uber, meanwhile, further insulted cabbies by continuing to operate during the airport strike, apparently exploiting the ridesharing “opportunities” offered by the work stoppage. The strike spiraled into a nationwide solidarity campaign: “#DeleteUber” spurred consumers to show their discontent with Kalanick by nixing the app from their phones.

“Now is the time for all those who value justice and equality to join together in holding Uber accountable, not only for its complicity with Trump’s hateful policies but also for impoverishing workers,” the taxi workers stated in solidarity with #DeleteUber.

Bloomberg reported on Thursday that Kalanick had stepped down from the council, issuing a conciliatory message in a leaked internal e-mail: “immigration and openness to refugees is an important part of our country’s success and quite honestly to Uber’s…. The executive order is hurting many people in communities all across America.”

But NYTWA kept the pressure on at the rally, contending that the anti-regulatory policies that tech upstarts like Uber promote suggest more about Kalanick’s true sympathies with the Trump administration than his retreat following a public shaming.

Fahd Ahmed, leader of the South Asian community organization Desis Rising Up and Moving (DRUM), proclaimed before a crowd of scores of labor and community activists:

Uber is a reflection, of what Trump wants to do. They are part of the same team. It doesn’t matter, if Uber tries to throw money at us….we know their ugliness. The drivers have fought back, the consumers have fought back, and we are going to continue to drive them back, as immigrants, and Muslims, and workers, and black people, as women, as queer people, we’re going to drive Uber out. Out of our homes, out of our cities, and take over as workers.

As the rally wound down— many moving onto a nearby protest against police brutality, with which the taxi workers had earlier declared solidarity—NYTWA founder Bhairavi Desai told The Nation that while Kalanick had tried to escape the bad publicity with his resignation from the advisory council. But, she said, “He’s gotta end his real Trump connection which is his business model, which is not respecting minimum wage and regulations.”

Going forward, NYTWA is working with driver members to help keep families with overseas connections safe, and counseling some drivers currently overseas on how and when to return to the US.

“It makes you appreciate gains that we’ve made as a society,” Desai said, “and recognize how hard we’re going to have to fight to keep them…. This is an administration that thinks the golden era was before the civil war.”

There are vintage reverberations with more recent New York history, as well. Desai recalled the moniker the administration of former Mayor Rudy Giuliani-turned-Trump advisor gave to cabbies when they organized a strike in 1998: “Taxi terrorists.”

So for New Yorkers, pushing back against the ruling elite’s divide-and-conquer tactics is nothing new. Since last month, local anti-Trump protests have been bolstered by a “hate-free zone” in Brooklyn’s Kensington neighborhood, helping community members come together to show solidarity with Muslim families. Yesterday, Yemeni bodega owners, generally not known for radical activism, staged an unprecedented strike to show that despite the billionaire president’s bullying and bigotry, his hometown remained a city of proud migrant shop owners.

NYTWA proclaimed in solidarity with the Yemeni business owners:

The city’s streets of sanctuary and worker-led movements are forming a new borderless urban frontline. A solidarity rally also emerged in Philadelphia, representing immigrant and Muslim diaspora workers with cable giant Comcast. Organized through Slack with grassroots collaboration, the rally brought hundreds of protesters to Philly’s streets, documented on social media under the hashtag “#TechHasNoWalls” and featuring slogans like “Immigration Innovation” and “Have we tried turning America off, waiting 10 seconds and turning it back on again?”

Time for a reboot in Washington. Paradoxically, while slick tech CEOs are apparently cozying up to the new administration, angling for deregulation and tax breaks, another side of the new economy proletariat is emerging as the anti-Trump resistance.