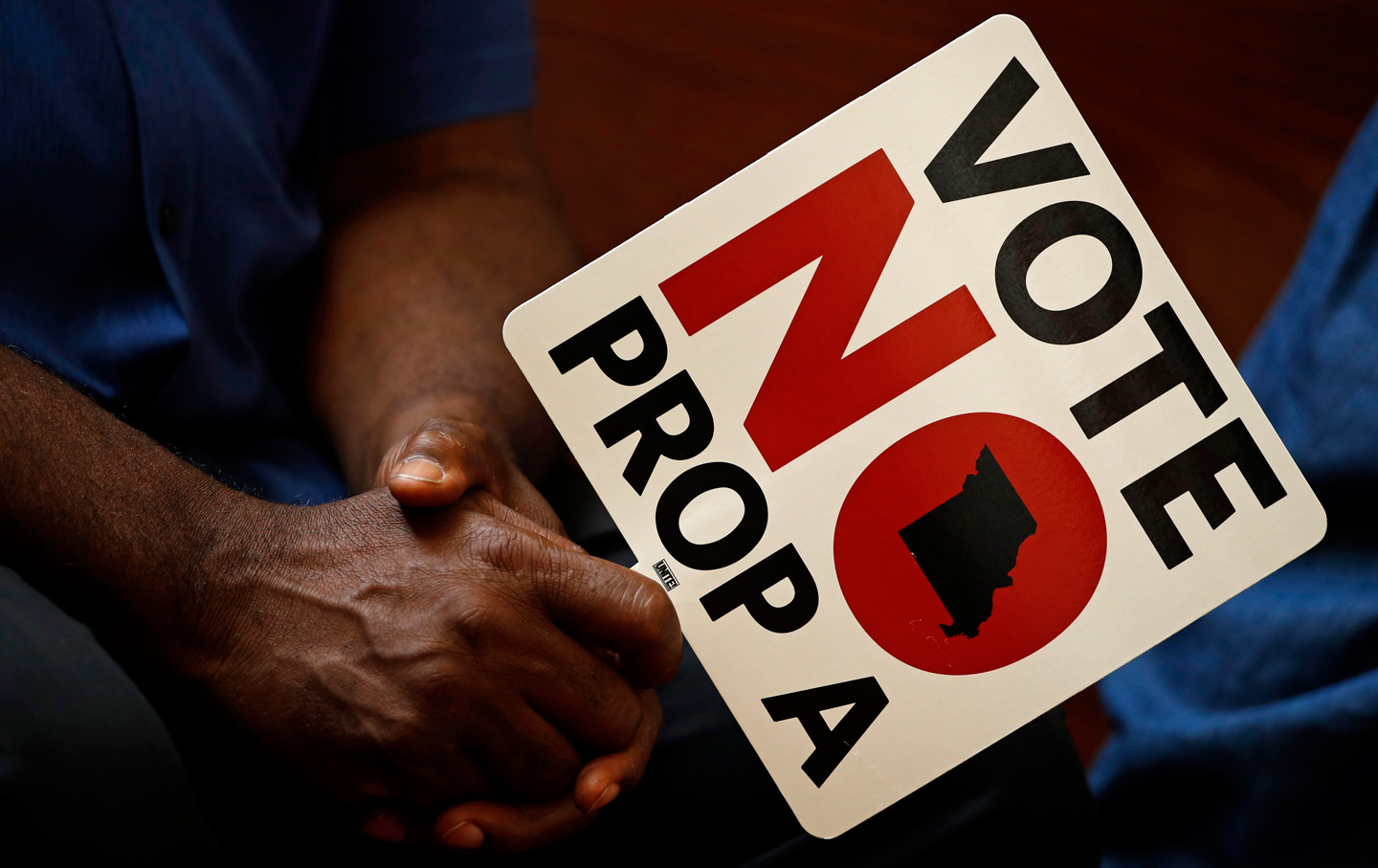 People opposing Proposition A listen to a speaker during a rally in Kansas City, July 31, 2018. (AP Photo / Charlie Riedel)

Americans want strong unions. That’s the message from polling that shows more than 60 percent of voters nationwide approve of organized labor. And that’s certainly the message from Missouri, where voters on Tuesday overturned the state’s so-called “right-to-work” law by an overwhelming margin.

The Missouri result offers a reminder of what happens when the people—as opposed to corporate-friendly Republican governors and legislators—are given a chance to decide whether they want a muscular labor movement to fight for better wages and benefits, and for fairness in the workplace and society.

In a state where Republicans have won the last five presidential elections and where the GOP now controls the executive and legislative branches of state government, 65 percent of the Missourians who cast ballots on Tuesday voted to scrap the “right-to-work” measure that was enacted just months after a corporate-aligned Republican grabbed the governorship from the Democrats in 2016.

“The defeat of this poisonous anti-worker legislation is a victory for all workers across the country,” declared AFL-CIO President Richard Trumka as the results came in Tuesday night. “The message sent by every single person who worked to defeat Prop. A is clear: When we see an opportunity to use our political voice to give workers a more level playing field, we will seize it with overwhelming passion and determination. Tonight is the latest act of working people changing a rigged system that for decades has been favoring corporations, the mega wealthy and the privileged few.”

“When we see an opportunity to use our political voice to give workers a more level playing field, we will seize it with overwhelming passion and determination.” —AFL-CIO President Richard Trumka

Trumka’s point is a vital one. Tuesday’s voting saw a number of labor allies—such as Kansas Democratic congressional candidate James Thompson—win key primaries. It also saw labor-backed Democrat Danny O’Connor finish within a whisker of his Republican rival in a special election to fill a historically Republican Ohio congressional seat.

But the Missouri win was the sweetest result for a union movement that has been under assault in recent years.

This landslide victory for labor rights upsets the political calculus, and the spin, of the billionaire class that has for decades promoted a nationwide drive to use the power of government to weaken unions.

The Koch brothers and other conservative campaign donors have provided lavish funding for this war on organized labor. In state after state, when Koch-sponsored, corporate-friendly governors have taken charge—Scott Walker in Wisconsin, Rick Snyder in Michigan, Mitch Daniels in Indiana, Eric Greitens in Missouri—they have signed so-called right-to-work legislation into law.

Designed to undermine the ability of unions to organize workers, to collectively bargain and to engage in politics on behalf of economic and social justice, right-to-work measures are really “right-to-work-for-less” laws. According to the Economic Policy Institute, “These bills won’t lead to more manufacturing plants or better jobs or anything good. They lead only to weaker unions, less bargaining power for [workers], and lower wages. Wages are 3.1 percent lower in so-called ‘right to work’ (RTW) states, for union and nonunion workers alike—after correctly accounting for differences in cost of living, demographics, and labor market characteristics. The negative impact of RTW laws translates to $1,558 less a year in earnings for a typical full-time worker.”

In Missouri, after Greitens (a scandal-plagued politician who has since been forced from office) signed the measure that was intended to make Missouri the nation’s 28th right-to-work state, labor groups launched a petition drive to force an override vote. As Trumka noted in an enthusiastic pre-election speech to union activists, “You needed 100,000 signatures to get ‘right to work’ on the ballot. You got over 300,000—213,000 of those were collected by volunteers.”

The override measure, which was listed on the statewide primary ballot as Proposition A, offered voters a chance to say “yes” or “no” to government-sponsored union busting. A “yes” vote would have made Missouri a right-to-work state. But Tuesday’s overwhelming “no” vote preserves the ability of unions to fight for workers in factories and warehouses, in schools and hospitals, and in the political process.

“Working people made our voices heard at the ballot box today and overturned ‘right to work.’ It’s a truly historic moment,” announced Missouri AFL-CIO President Mike Louis on election night. “Thousands of hardworking men and women in Missouri talked to their neighbors, friends and co-workers. We owe them this victory. Together, we knocked on more than 800,000 doors, made more than 1 million phone calls and talked to working people on more than 1,000 different job sites across the state. Tonight we celebrate, but tomorrow we’re getting back to work. We’re going to take this energy and momentum and build more power for working people in Missouri.”

Missouri is the latest sign of a true groundswell, and working people are just getting started.… The victory in Missouri follows a national wave of inspiring activism that is leading to life-changing collective bargaining agreements and electoral triumphs that remind America the path to power runs through the labor movement. From statehouses and city councils to the halls of Congress, working people are fighting back; and this November, we will elect our allies and retire our enemies. Working people across Missouri made this transformational moment possible, and we are following their lead to changing the world.