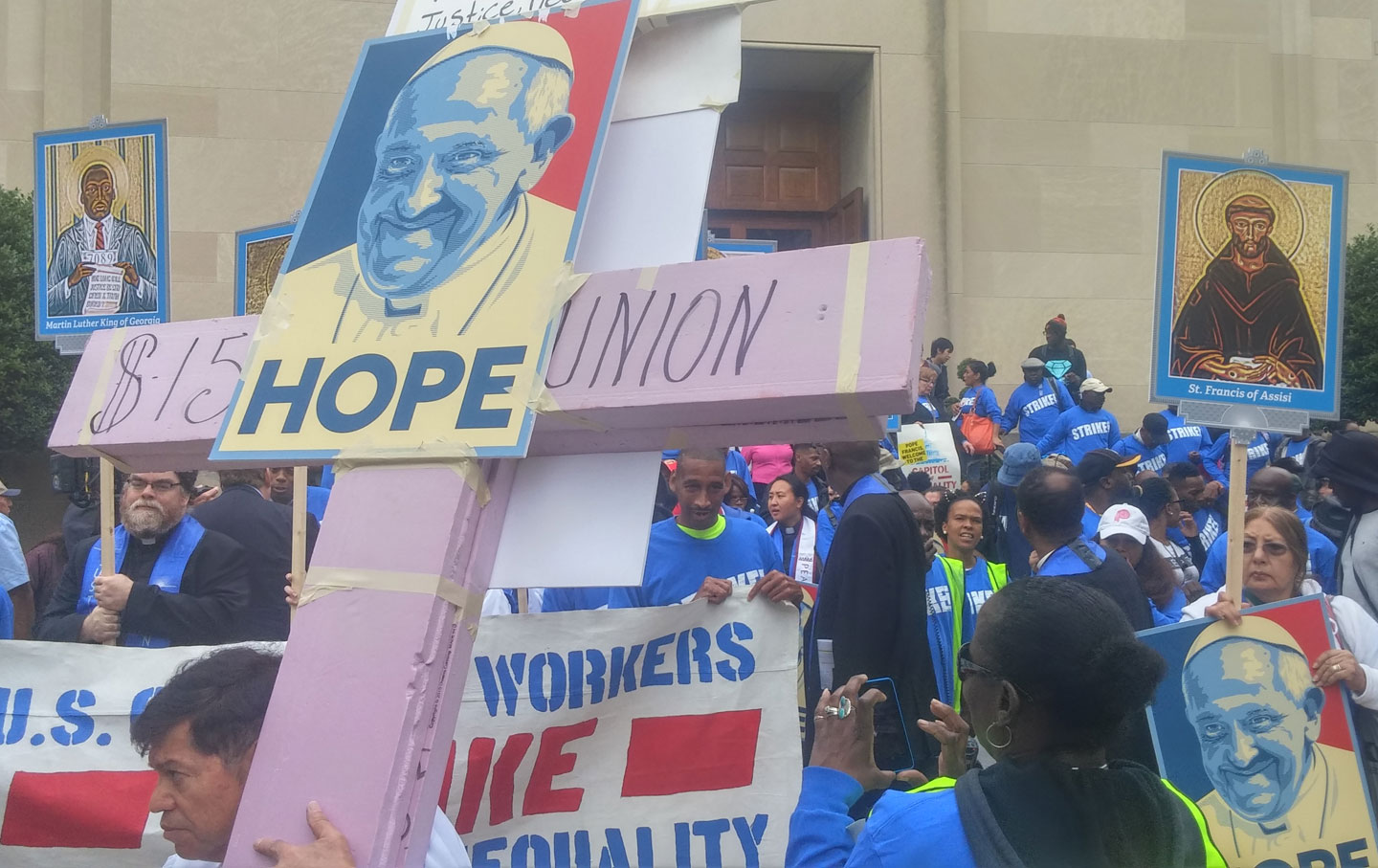 Federal workers huddle outside of Lutheran Church of the Reformation near the US Capitol. (George Zornick)

As Pope Francis arrived in Washington, DC, on Tuesday, one thousand federal service workers—including many at the US Capitol, where the pope will speak later in the week—went on strike to protest poverty wages, poor working conditions, and the lack of a union.

The federal government is the largest low-wage employer in the country, despite President Obama’s recent executive order requiring federal contractors to pay at least $10.10 an hour. At an interfaith prayer service with the workers before a march to the Capitol, faith leaders decried the situation and appealed to the pontiff, who has spoken out strongly about income inequality as “the root of social evil.”

“Low-wage work is a sin against you and against all of human dignity,” Jim Winkler, general secretary of the National Council of Churches, told the crowd. “So we are so excited that today Pope Francis will come here, because his message has struck a chord in all of us in this nation. And we know the day after tomorrow, when he speaks to the Congress, that he is going to lift up your cause and our cause of economic justice and of just wages and working conditions for all of you.”

The workers, organized under the auspices of Good Jobs Nation, which is funded by several large labor unions, had previously sent a letter to the Vatican asking for an audience with the pope during his visit.

Santos Villatoro, who works breakfast service inside the Dirksen Senate Office building, addressed the prayer service and later described to The Nation through a translator why she was joining the strike.

“It’s a very busy place. I start at 6 am. I’ve been working there for eight years. Sometimes I don’t get eight hours a day. That’s not fair. I earn very little,” she said. “The annual increase we get in our salary is five or six cents per year. I think it’s a shame that even though we work in a federal building, in the Capitol, we get treated that way.”

Villatoro has a heart condition that requires a pacemaker, and said she has a doctor’s note saying she is not to lift anything over 20 pounds. But she said the large coffee containers she sets up every morning for senators, staff, and visitors weigh “25 or 26 pounds.”

She also described how three years ago she slipped on some metal grates on a snowy day and injured her hip. “Instead of calling an ambulance, they just picked me up and put me in a wheelchair. And they rode me to Union Station and told me to get a taxi to the hospital,” she said. “Imagine if I didn’t have money to pay for a taxi, how would I have gotten there?”

If the pope were to grant an audience to federal service workers, Villatoro said she knows what she would say. “I would tell him that I’m very happy that he’s coming to this country. And that he finds a way to help us, the poor. That he speak for us. And that he speaks to senators and other lawmakers, that they look after workers. Because we’re the ones that have been affected.”

While Obama did raise the federal contractor minimum wage to $10.10 per hour, that is still only $21,000 per year for workers getting forty hours per week. The federal poverty level for a family of four is $24,250, and recent studies indicate people in the Washington, DC, metro area, where many of the low-wage federal service workers are concentrated, need at least $10,000 above the federal poverty line to keep up with a high cost of living.

Activist pressure played a big role in Obama’s executive order on wages, as well as his more recent executive order requiring federal contractors to provide paid sick leave. The movement now is asking for another order, raising the wage to $15 per hour.

“Today as we welcome Pope Francis to the United States and the US Capitol, I hope that every member of Congress and the president will heed his call for social and economic justice,” said Senator and presidential candidate Bernie Sanders, who also addressed the prayer service and explicitly called on Obama to sign another executive order. “There is no justice when millions of people throughout our country, including people working in the United States Senate, are working for wages that are too little to take care of their kids, to take care of their family.”

Sontia Bailey works Monday through Friday at a cafe in the Capitol, only a few hundred yards from the House and Senate floors. She also has to work a second job at KFC in order to support her family. She miscarried a child last year, which she attributed to her heavy work schedule.

If the pope showed up, Bailey said she wouldn’t say anything to him. “I’d give him a big hug. I would give him a big hug. Because by him just coming out, that let’s me know right there that he understands,” she said. “Poverty, it’s real. It’s not acceptable. People try to sweep it underneath the rug, but working people are struggling just like a panhandler asking for change. It’s sad but it’s the truth.”