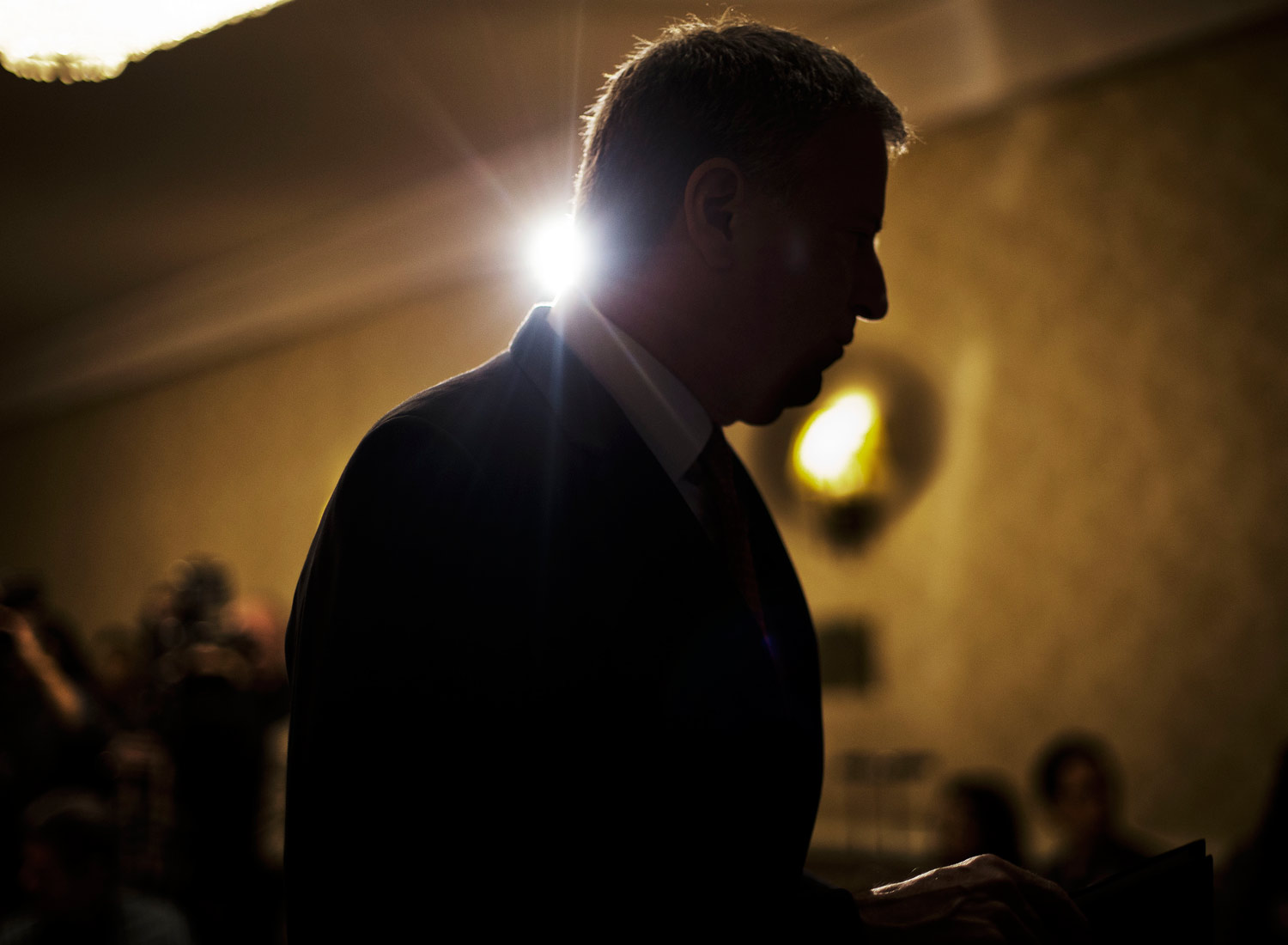 One undeniable success of the right’s decades-long campaign against the so-called liberal media can be seen in the eagerness of so many journalists to adopt conservatives’ terms of debate in order to pre-empt accusations of liberal bias. Rather incredibly, this happens when allegedly liberal reporters profess to be defending liberalism from its enemies—enemies who often turn out to be (you guessed it) liberals.

Today’s Exhibit A is “De Blasio’s Flawed Vision of Liberalism,” a critique of New York Mayor Bill de Blasio by reporter Noam Scheiber, written for the January 25 edition of The New York Times’s “Sunday Review.” According to Scheiber, a veteran of the Marty Peretz–era New Republic, de Blasio’s 2013 landslide victory “fused two distinct strands of progressivism.” These were “economic populism,” which appeals to almost everyone, and “‘identity group’ liberalism,” which appeals to black and Latino voters “as blacks and Latinos, not on the basis of economic interests they shared with whites.” According to Scheiber, “The problem for Mr. de Blasio is that only the first approach has widespread appeal.”

Now, had Scheiber made this argument honestly, I would be cheering him on. The argument that liberals must prioritize economics over identity politics at a national level runs through nearly every page of my history of postwar American liberalism (The Cause, 2012) and has been a frequent theme of this column. Instead, he chooses to distort de Blasio’s record to fit the contours of his ideology.

Take, for example, Scheiber’s complaint about what he calls the mayor’s “ham-handed showdowns with Gov. Andrew M. Cuomo.” I had to reread this sentence to make sure it was as dishonest as it initially appeared. Alas, another way to describe de Blasio’s “ham-handed showdown” with the governor—who, together with the State Legislature, controls most of the purse strings for the city—would be “the successful effort to secure $300 million worth of state funding in order to provide universal pre-K education to every four-year-old in New York City.” Were Scheiber reading the same paper’s editorial page, he would have seen this achievement described as “a milestone of education reform” for a “small city’s worth of children” and their families. A more impressive example of economic liberalism at work is difficult to imagine. And yet, amazingly, Scheiber does not even mention it.

Nor does he mention, just for starters, de Blasio’s successful efforts to allocate additional funding for after-school programs for all New York schoolchildren, his expansion of sick-leave and family-leave policies, his raising of living-wage requirements for companies doing business with the city, his successful demands for additional affordable housing from developers, or his fights in Albany to allow the city to raise the minimum wage to what would be the highest in the nation. True, de Blasio was caught off guard when Cuomo stabbed him in the back on the issue of charter school expansions and was forced to beat a humiliating retreat. But charter schools educate only 6 percent of the city’s 1.1 million public schoolchildren. Additional funding for them may be important to the hedge fund managers who bankroll political campaigns, along with a few right-wing editorial pages and pundits, but like de Blasio, most New Yorkers are far more concerned about the school system that serves the other 94 percent.

As for the identity politics component of de Blasio’s agenda, well, it would be nice to live in a place where progressives were not divided across lines of race, ethnicity, gender and sexuality. Unfortunately that is not the world—and certainly not the New York—that reality has delivered. Scheiber mocks de Blasio’s commitment to end predecessor Michael Bloomberg’s “stop and frisk” policies. He does not note that the courts eventually declared these to be unconstitutional, nor the fact that of the more than 2 million such stops that the NYPD made between 2008 and 2012, according to statistics compiled by the New York Civil Liberties Union, nearly 90 percent of those victimized were innocent and fewer than 10 percent happened to be white.

It’s a shame that ending this oppressive and ineffective policy was not a higher priority for white voters, but it turns out that they are a minority of New York City Democratic primary voters these days. In the meantime, one can be pretty damn sure that the issue mattered a great deal to black and Latino voters, who are about nine times as likely to be stopped and frisked as their white counterparts. Would de Blasio be mayor today had he not been the only major candidate in the race to promise to end the practice outright? History does not play “what if,” but his victory undoubtedly had a great deal to do with this bold position.

Scheiber quotes opinion polls dated nearly three years before the next election as if they matter, but of course what matters are actual votes cast. De Blasio is betting that by delivering on his campaign promises in the areas of both economic inequality and social justice, he can assure himself not only re-election but the ability to transform the way New York City government operates on behalf of the vast majority of its citizens—the ones Bloomberg all but ignored while tending to the needs of Russian oligarchs and Goldman Sachs CEOs. “Get to the basics of what we came here to do, say it squarely, say it in a definitive manner, and then organize people consistently to act on it”: that’s the “paradigm shift” de Blasio has in mind, as he explains in my new e-book/paperback-on-demand, Inequality and One City: Bill de Blasio and the New York Experiment, Year One (available at thenation.com/ebooks on February 16). It’s a shame that so many journalists—even “liberal” journalists—feel a need to deny his accomplishments in order to distort that truth.