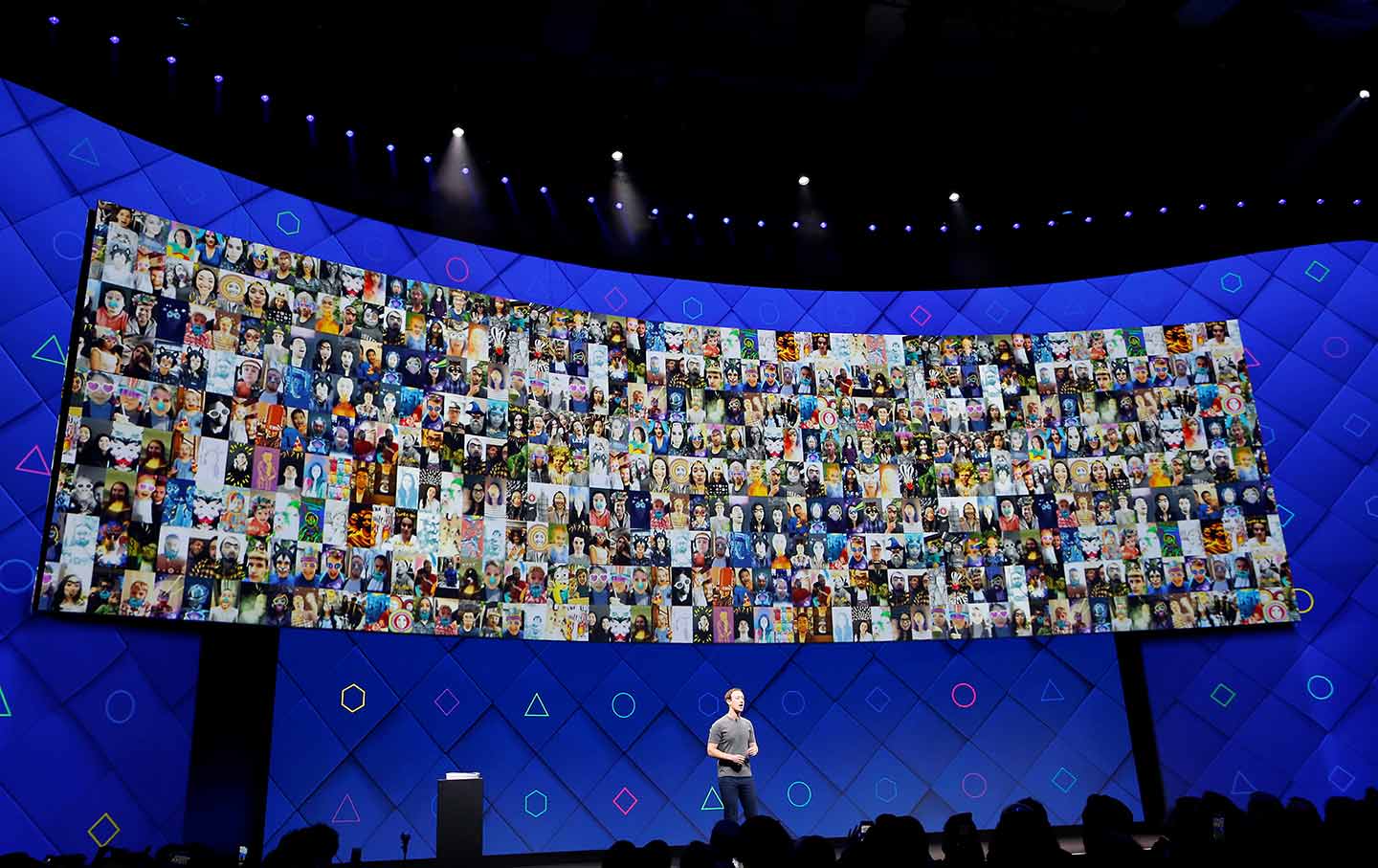 Facebook CEO Mark Zuckerberg shares with President Donald Trump the belief that he can blatantly lie about his past and get away with it. Testifying before Congress in October, Zuckerberg intimated that he had founded Facebook to oppose the Iraq War. (Trump, of course, also lies about his alleged opposition to the war.) But Zuckerberg’s actual 2003 creation, FaceMash, was a “hot or not” guide for piggish male Harvard students (like himself). Again, sounding a lot like Trump, he had blogged about women’s photos as he was making FaceMash, “I almost want to put some of these faces next to pictures of some farm animals and have people vote on which is more attractive.”

Another quality Zuckerberg shares with our current president is the impetus to hijack the memory of Martin Luther King Jr. In 2017, Trump called the slain civil rights icon “a man who I’ve studied and watched and admired for my entire life.” With the kind of infinite chutzpah that apparently accompanies a net worth of over $70 billion, Zuckerberg, in a recent speech at Georgetown University, cited King’s “Letter From Birmingham Jail” to justify Facebook’s decision to let political candidates lie on his site and to continue helping candidates target those lies to those most likely to believe them. “In times of social tension, our impulse is often to pull back from free expression because we want the progress that comes in from free expression but we don’t want this tension,” Zuckerberg said. “We saw this when Martin Luther King Jr. wrote his famous ‘Letter From Birmingham Jail’ when he was unconstitutionally jailed for protesting peacefully.” Zuckerberg also referred to “the effort to shut down campus protests during the Vietnam War” and the imprisonment of Eugene Debs during World War I.

Now, Zuckerberg is probably a smart fellow; he likely understands that a private corporation making millions to pass along incendiary lies on behalf of nefarious politicians is not the same as an individual opposing government censorship of unpopular views. But just in case he didn’t know, King’s daughter Bernice King volunteered to explain it to him, tweeting, “I heard #MarkZuckerberg’s ‘free expression’ speech, in which he referenced my father. I’d like to help Facebook better understand the challenges #MLK faced from disinformation campaigns launched by politicians. These campaigns created an atmosphere for his assassination.”

During the 2016 election, targeted lies filled every niche of Facebook. And with the help of the company’s sophisticated algorithms, these almost certainly contributed to Trump’s victory. If Zuckerberg somehow remains unconvinced, he might want to look into an outfit called the Internet Research Agency in St. Petersburg, Russia, which targeted African Americans by creating accounts with names like Blacktivist and Woke Blacks to depress turnout for Hillary Clinton. For instance, one of the latter’s messages read, “We cannot resort to the lesser of two devils. Then we’d surely be better off without voting AT ALL.”

Facebook says it is fighting these tactics, but only if undertaken by people not running for office. The Trump campaign has already purchased millions of dollars’ worth of ads, a number of which are devoted to lies about Joe Biden. In testimony before Congress, Zuckerberg told New York Representative Alexandria Ocasio-Cortez, “I think lying is bad.” But he still seems happy to juice Facebook’s stock price by soliciting politicians’ lies.

This is of particular concern to anyone who cares about the viability of democracy anywhere on this planet, because Facebook is one of the most efficient means of spreading news ever devised. In its last quarterly statement, the company reported that it had 2.8 billion regular users across its family of apps—Instagram, WhatsApp, Messenger, and Facebook itself—with over 1.6 billion people showing up on Facebook every day. As a result, profits are sky-high. During the third quarter of 2019, they were up by 19 percent over the previous year, topping $6 billion.

Zuckerberg has said privately that he considers an Elizabeth Warren presidency an “existential” threat to his company, and he promises to “go to the mat” and fight against it. It’s not hard to conclude that he is interested in keeping Trump in power and his followers happy. He hired former George W. Bush adviser Joel Kaplan to be the company’s vice president of US public policy in 2011 and chose former Republican senator John Kyl to conduct a review of conservatives’ complaints. (While he could not find any significant evidence for their accusations of liberal bias, his report nevertheless repeated their worries that conservatives could be harmed by hate speech policies.)

Politico’s Natasha Bertrand and Daniel Lippman recently broke the story that Zuckerberg initiated a series of private dinners at one of his many homes with Trump boosters such as The Daily Wire’s Ben Shapiro, far-right talk-show host Hugh Hewitt, Fox News’ Tucker Carlson, and GOP Senator Lindsey Graham. The authors quoted a source who found the reaction to his entreaties “more positive than I anticipated” and judged Zuckerberg to be “receptive and thoughtful.” Another said, “I’ve always thought that he wanted to make things right by conservatives.”

We should hardly be surprised by Facebook’s decision to invite Trump and company to lie. It’s both profitable and good politics, from Zuckerberg’s standpoint. Warren does have a plan to break up the company (and companies like it), and Facebook’s salvation requires either a Trump reelection or a Republican-controlled Senate. We should not be shocked by the company’s decision to include the journalistically indefensible Breitbart News in its new “trusted sources” news section or by its willingness to allow the scurrilous Daily Wire to violate the company’s rules with what Judd Legum’s Popular Information newsletter has identified as exactly the kind of “inauthentic coordinated behavior” Facebook forbids. What should surprise us, however, is our unwillingness to recognize just how destructive a force Facebook has become and ask ourselves, “How will we save our country and democracy itself from its ravages?”