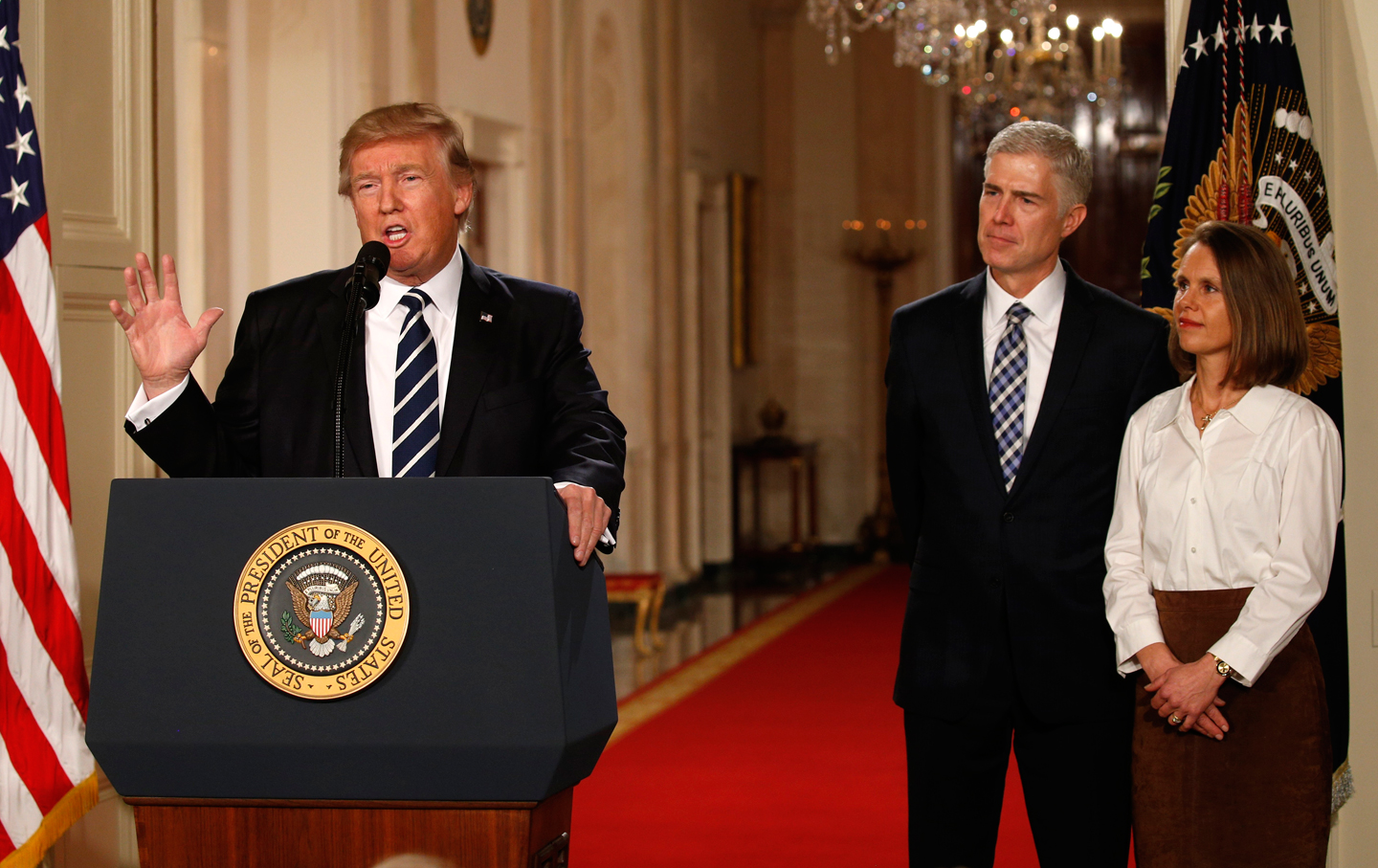 Donald Trump announces his nomination of Neil Gorsuch to be an associate justice of the Supreme Court, January 31, 2017. (Reuters / Kevin Lamarque)

Week two of the Trump administration was dominated by fallout from last Friday’s ban on refugees and on travelers from seven Muslim-majority countries. The White House tried to downplay its impact: Press Secretary Sean Spicer claimed Monday that only 109 people were “slowed down” by the order. But Friday, a lawyer from the Department of Justice admitted in court that more than 100,000 people lost their visas.

Everything Donald Trump Did in His First Week as President

The Trump administration made a number of other moves this week, from key appointments to the firing of the acting head of the DOJ. We’re tracking the most significant, concrete actions here, in our weekly recap.

Resurrecting torture-friendly officials at the CIA. Gina Haspel, Trump’s pick for second-in-command at the CIA, oversaw the torture of two detainees at a detention site in Thailand in the early years of the George W. Bush administration. One of the men was waterboarded more than 80 times in a single month, confined for hours in a small box, and slammed into walls. Later, Haspel helped to destroy video recordings of the torture sessions. Haspel’s appointment does not require Senate confirmation.

Putting a hard-right-winger on the Supreme Court. On Tuesday night, Trump unveiled his pick to replace Antonin Scalia on the Supreme Court: Neil Gorsuch, whom Oregon Senator Jeff Merkley described as “an extreme right-wing jurist who has ruled dozens of times for the powerful and against the less fortunate.” But his record is somewhat beside the point: As Ari Berman writes, that seat on the high court belongs to Merrick Garland. “It was unprecedented and outrageous that a judge as qualified and mainstream as Garland didn’t even get a hearing,” writes Berman. “And it’s more than a little ironic that a president who won 5 million more votes than his opponent in 2012 couldn’t make the selection but one who got 2.9 million fewer votes than his opponent can.”

The beginnings of a massive deregulatory push. Trump followed up on a campaign promise to cut regulations, signing an executive order that directs federal agencies that want to implement a new regulation to repeal two others in exchange. David Dayen writes that the order is mainly a gimmick, and he doubts it will actually lead to the withdrawal of a single rule, but is a clear message that a broad deregulatory push is coming.

A deadly and potentially ill-planned raid in Yemen. Trump approved a counter-terror operation in Yemen that ended in the deaths of an American Navy SEAL and, according to the rights group Reprieve, as many as 23 civilians, including 10 children. According to The New York Times, “almost everything that could go wrong did.”

Letting retirement advisers rip off clients. The Obama administration spent years writing and implementing a rule that forces investment advisers to operate in the best interest of their clients, instead of offering advice that prioritizes their own financial incentives. Americans lose $17 billion each year from this type of bad advice, but Trump signed a presidential memorandum Friday to eliminate the rule, which was to take effect in April.

FCC won’t defend rate caps on prisoner phone calls. Under a Democratic majority, the FCC implemented limits on how much prisoners could be charged for making phone calls; states would often award prison phone contracts to companies that could charge as high as $14 per minute; the companies then split profits with state governments. The limits met court challenges, and the new Republican FCC majority announced Thursday it would stop defending the case in court.

Aggressive, confusing actions toward Iran. Sanctions against certain people and companies in Iran were the only concrete action the administration took regarding Iran this week. But several rhetorical assaults are worth noting: Trump’s National Security Adviser, Michael Flynn, told the White House press corps Iran was “officially on notice.” Press Secretary Sean Spicer falsely accused Iran of attacking a US military ship. And Trump sent a series of vague, threatening Tweets about Iran, including one at 3:30 in the morning. Talk matters in the international arena—it can lead to war.

Placed a political adviser on the National Security Council. In a presidential memorandum reorganizing the National Security Council, Trump sidelined the director of national intelligence and the chairman of the Joint Chiefs by saying they should attend principals-committee meetings only “where issues pertaining to their responsibilities and expertise are to be discussed.” He added his political adviser Steve Bannon—who has no foreign-policy experience and has expressed a litany of rabidly Islamophobic views—as a regular member, which is unprecedented and concentrates even more power over foreign policy in the Breitbart wing of the White House.

Fired the acting attorney general. Within 24 hours of Trump’s executive order in immigration from seven Muslim-majority countries, several federal courts halted some parts of enforcement. Monday, acting attorney general Sally Yates said she would not have the Department of Justice defend the ban in court, because she was not “convinced that the Executive Order is lawful.” Trump fired Yates almost immediately. He had the legal right to do that—unlike Nixon’s “Saturday Night Massacre,” which was illegal—but the move raises questions about whether Trump thinks the Department of Justice works for him, instead of defending the country’s laws.