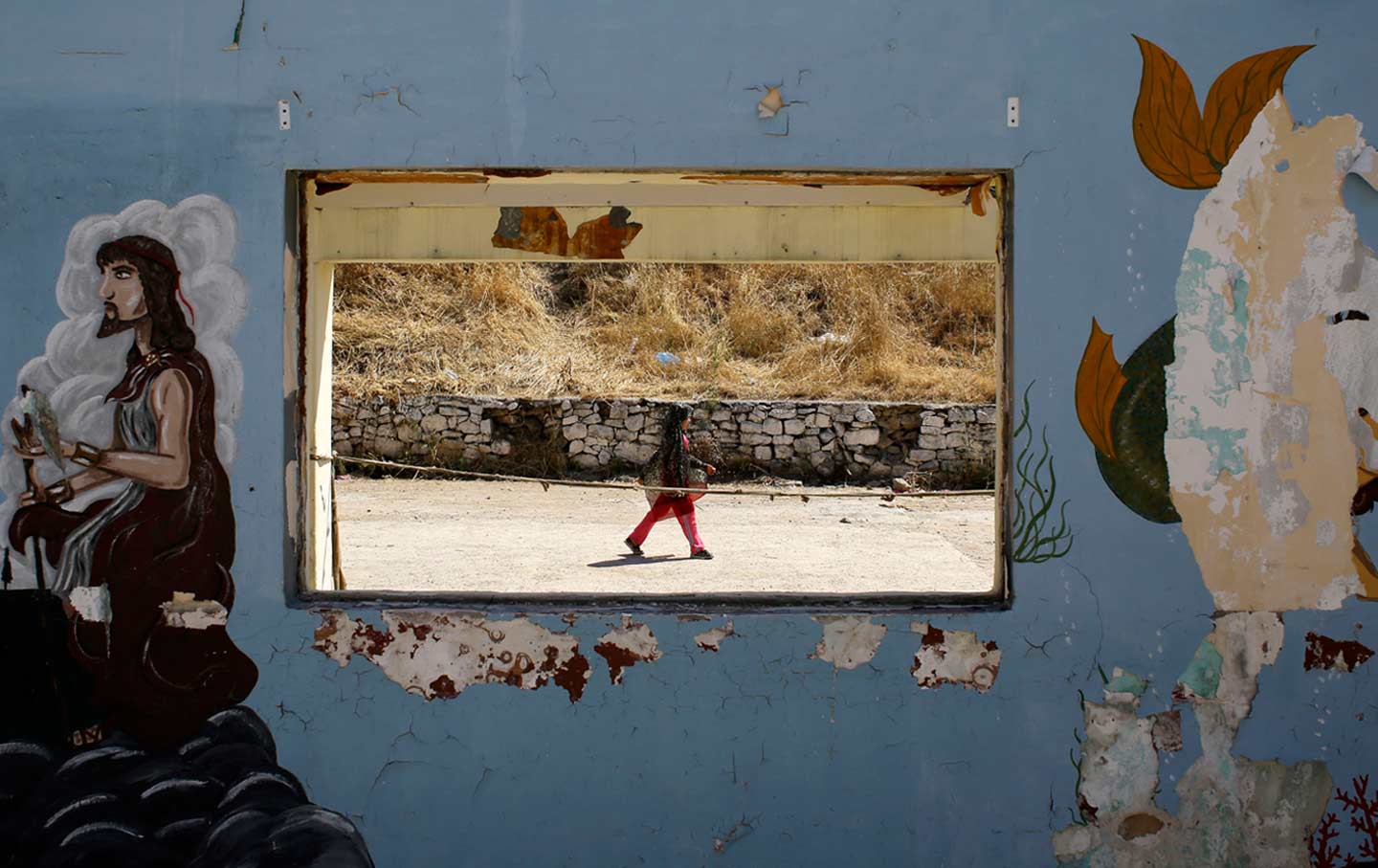 A girl walks at a refugee and migrant camp on the northeastern Greek island of Lesvos. (AP Photo / Thanassis Stavrakis)

The short fuse of Europe’s migration crisis exploded in Paris last Friday when terrorist attacks ripped through the city’s heart and rattled its fraught borders.

As Paris quakes, reactionary politicians have begun exploiting the terror attacks as a platform for demagoguery, citing unsubstantiated suspicions of links between terrorism and Syrian refugees. In the wake of the attacks, Hungarian right-wing Prime Minister Viktor Orban stated Monday that “terrorists have exploited mass migration by mingling” among incoming refugees. With an air of vindication, French National Front chief Marine le Pen told NPR the attacks signaled a need to “reestablish our own borders” and protect French “customs” in order to “eradicate Islamic fundamentalism on our soil.”

It matters little that refugees are among the most acute victims of the kind of terror for which they’re being collectively punished.

John Dalhuisen, Amnesty International’s director for Europe and Central Asia, predicts the attacks will now be used by anti-Muslim or anti-immigrant leaders, particularly in Eastern Europe, to justify intensified border crackdowns based on perceived security threats (however baseless), which in turn “will make it increasingly difficult for Germany, the [EU] Commission, others who are in favor and see the need for a [refugee] redistribution system, to get the necessary support for that.”

But reform is inevitable if the concept of European unity is to sustain itself. The Paris attacks have “fundamentally changed the politics of this issue,” Dalhuisen says, but the current reactionary backlash “will rub up against the fact that numbers will just keep coming…whether people want it or not.” The question looming over officials is simply, “What time do states realize that they need to put order in this system?”

Currently the EU’s Schengen Agreement theoretically guarantees a baseline of free movement. However the Dublin Regulation restricts asylum seekers to applying for relief in a single state, which means that to reach their destination of choice, like relatively migrant-friendly Germany, refugees must cross through multiple, and increasingly hostile, borders. Less migrant-friendly EU states have erected a haphazard gauntlet: Hungary has constructed ragged border fences, spurring a contagion of regional border-tightening; neighboring Balkan states and, in recent days, Dutch and French politicians have threatened to thwart migration with ramped-up border patrols. Yet tighter borders will actually only drive people toward riskier, more chaotic overland or sea routes. And fundamentally, the notion of completely sealing off Europe remains a political fiction.

The myth of border “security” is buttressed by increasingly elaborate, and ultimately useless, fences and walls ring-fencing Fortress Europe. At the Western-most edge of Europe, at the Spanish territories in Africa, a high-tech fortress equipped with “infrared cameras and radars” has emerged at the two Spanish territories Melilla and Ceuta, which have effectively condemned African migrants to a lawless zone or illegal trafficking routes.

Meanwhile the eastern “frontline” states, mainly Greece and the Balkans—where roughly 250,000 have crossed this year and humanitarian resources are vastly lacking—Amnesty has documented instances of authorities informally “pushing out” refugees: They get “slapped, punched and kicked” or arbitrarily imprisoned as they seek humanitarian protection.

One Syrian refugee recounted to Amnesty being ejected by soldiers at the Bulgarian border with the very same brutality that he was trying to flee:

They put us in a jeep and took us near the international border crossing by jeep. They slapped our necks and said “walk, goodbye” showing Turkey.… When we turned back to look at them, they showed us their guns.… After three years of war in Syria, I am scared of guns.

Hungary’s new border laws allow the army to intervene against “illegal” border crossings with “rubber bullets, tear gas grenades and pyrotechnical devices,” according to Amnesty. Hungary has also arbitrarily deemed Serbia a “safe country” for asylum seekers to “ensure that all asylum applications of people who traveled through Serbia are rejected automatically.”

Such attempts to “opt out” of international law not only fuel chaos in neighboring states but erode the legal basis for Schengen by imposing a unilateral border policy and flouting international human-rights principles. Germany, meanwhile, is being pushed toward a “nuclear option” of threatening to shutter its own borders, potentially unleashing catastrophic ripple effects as migrants get trapped in transit countries.

For the European project, the greatest casualty of the chaos is the political consensus on its regional laws are precariously balanced. For migrants, the consequences are more lethal: more people resorting to illegal means of passage, promoting the clandestine smuggling networks rife with exploitation, brutality and sexual assault. And at what cost to future generations who will be tasked with rehabilitating their communities, wherever they ultimately settle?

The savage irony wasn’t lost on a young Syrian quoted in Amnesty’s report: “If we were to keep the money we spend on smugglers, we could build a life for ourselves in Europe. But we spend all this money on criminals.”

Amnesty calls for an overhaul of Europe’s migration regime, with human rights–based reforms allowing free movement and facilitating permanent settlement and family reunification. Going forward, member states should accept “a fair share of the global refugee population by opening more safe and legal routes for refugees” and over the next two years, open at least 300,000 resettlement and humanitarian migration slots “for the most vulnerable refugees outside of the EU.”

Yet European officials’ recalcitrance may soon buckle as the ongoing refugee crisis simply overwhelms them. As with the Eurozone financial crisis, policymakers will see no choice but to negotiate some sort of “a permanent relocation mechanism,” or ideally, a uniform asylum policy, says Dalhauisen: “EU institutions will push for it, Germany will push for it.… last weekend plays against it, but the growing numbers arriving will push people into it.” When exactly that happens hinges on political will, “but they won’t reform without a whole lot more chaos.”

Beyond today’s convulsion of xenophobic terror, realities of war and demography will determine the region’s social destiny. Whether we uphold humanitarianism or abandon it, those graver forces are bringing down border walls faster than anyone can build them.