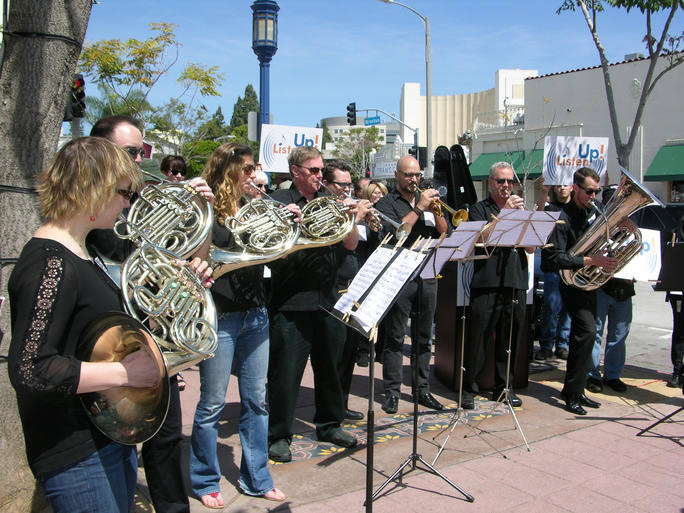 Hollywood is the home of the big-name blockbuster. But in many ways, Los Angeles is a classic company town, where one industry supports legions of creative workers. For one particular class of artists, however, the business threatens to do an especially efficient job of turning their passion into penury: the recording musicians who bring you those dramatic orchestral swells of the cinematic experience are in danger of losing their jobs, as production companies go overseas for post-production work.

So while film corporations ring up mega-profits, the “offshoring” of film scoring, using musicians abroad to record accompanying music for a film, is muting the city’s vibrant community of working musicians.

With digital technology making music production more atomized and exportable than ever, the recording industry has evolved massively since the founding of the American Federation of Musicians more than a century ago. But the basic needs of its membership—for economic security and dignity in their profession—have remained constant. As a craft guild struggling to adapt to a commodified arts econmy, the AFM has launched the Listen Up! campaign to curb the industry practice of sending film-scoring work abroad.

The key target is Lionsgate, which recently courted controversy by commissioning musicians in Macedonia to score the American football-themed film Draft Day. Some major studios such as MGM and Fox generally have formal contracts with the union, but like other “independent” studios, Lionsgate operates autonomously and is not a signatory of the AFM contract. Out of twenty Lionsgate films produced since 2011, AFM estimates that the vast majority have not met prevailing industry standards according to AFM’s contract.

According to AFM, “the off-shoring of soundtrack scoring for just four Lionsgate films between 2008 and 2010 resulted in a total loss of lifetime compensation estimated at $10 million for thousands of domestic musicians including wages, and no payments were made into the AFM retirement and health care plans.” Meanwhile, the company has gobbled up tens of millions of dollars in tax credits from localities—a common scheme of local governments subsidizing entertainment business projects in the name of “incentivizing” development.

AFM Local 47, representing Los Angeles musicians, sees Lionsgate as a harbinger of a troubling trend. Despite the industry’s hyper-commercialism, it has long served as an economic bedrock for culture industry workers; many musicians earn their living from a variety of income streams, but film work provides both a steady job as well as residual payments in the future.

The union warns that as companies seek to lower labor costs, pulling jobs away from local musicians erodes the relationship between the craftsperson and the marketplace, and makes it harder for even the most talented to sustain themselves.

“We just want to be treated like every other guild that goes through this process when they make a film,” says Rafael Rishik, a Los Angeles-based violinist. Noting a general paucity of public support for culture, he adds, “In this day and age, when we’re being told libraries and schools have to be closed for lack of funds…. [if] motion picture companies, production companies are gonna take this money, they should do the right thing and not outsource our jobs.”

For the arts community, since big-name films are the city’s main product, even an occasional movie gig for musicians subsidizes their professional pursuit of more freelance creative work, like concert performances or arts education work. Overall, the local scene benefits from the concentration of talent in the region, Rishik observes: “Orchestras, chamber music, club dates, and music education in the schools, all thrive because of the residual effect of the recording industry.” According to federal census data, Los Angeles and New York, two film-industry hubs, have some of the highest concentrations of workers in the creative industries.

When an industry that used to be the bread-and-butter of local starving artists starts scouting for musicians in Macedonia, it raises questions about the real net impact of entertainment industry tax breaks. Currently, thirty-nine states and Puerto Rico provide film or television-production tax rebates, subsidizing the entertainment business to the tune of about $1.5 billion. Yet many of these agreements lack concrete mandates to direct how companies use taxpayer money in the local economy. Community advocacy groups say Hollywood’s subsidies should come with stronger conditions to commit corporations to investing in the local economy and infrastructure, rather than exploiting local resources without accountability.

A 2010 Tax Foundation analysis found that the claim that subsidies to the film industry boost local economic growth falls flat, concluding, “The competition among states transfers a large portion of potential gains to the movie industry, not to local businesses or state coffers. It is unlikely that movie production incentives generate wealth in the long run. Most fail even in the short run.” Furthermore, there is a tendency for subsidies to become a self-perpetuating artificial commercial sector, using tax breaks to prop up investment, rather than the other way around.

Meanwhile, real artists need real work. The labor activism of Hollywood’s professional classes was catalyzed in the turmoil of the Great Depression, as artisans revolted against the big studios’ Hollywood hegemony. But since then, public culture has driven a false dichotomy between art and industry, viewing creative professionals more as individual talents than as a craft workforce, which in turn undermines creative workers’ collective leverage against a notoriously predatory business.

Labor advocates say that in failing to reinvest in the creative labor force, the industry’s parasitic links to state and local budgets degrades musicians’ job quality and erodes the public’s appreciation of the social role of their craft, in entertainment and the local community.

To organizer Ed Gutierrez, musicians are working not only to preserve their livelihoods but also to preserve a social contract between the industry and the public, since taxpayers now act as financiers and as cultural consumers of film and music. “When a film company like Lionsgate accepts X millions of dollars of public money to do the filming in the United States,” Gutierrez says, “whether it be the state of Ohio, or the state of California, or the state of New York, we would like for the public to see a return on that investment, up to and including the post-production work being done domestically.”

Despite all the cash sloshing around in the industry—California’s legislature is now weighing yet another tax incentive bill for the television and film industries—creative workers never seem to get more than an ever-shrinking trickle. But real labor is invested in creating the magic of the movies, and the musicians behind the scenes know their credit is way overdue.