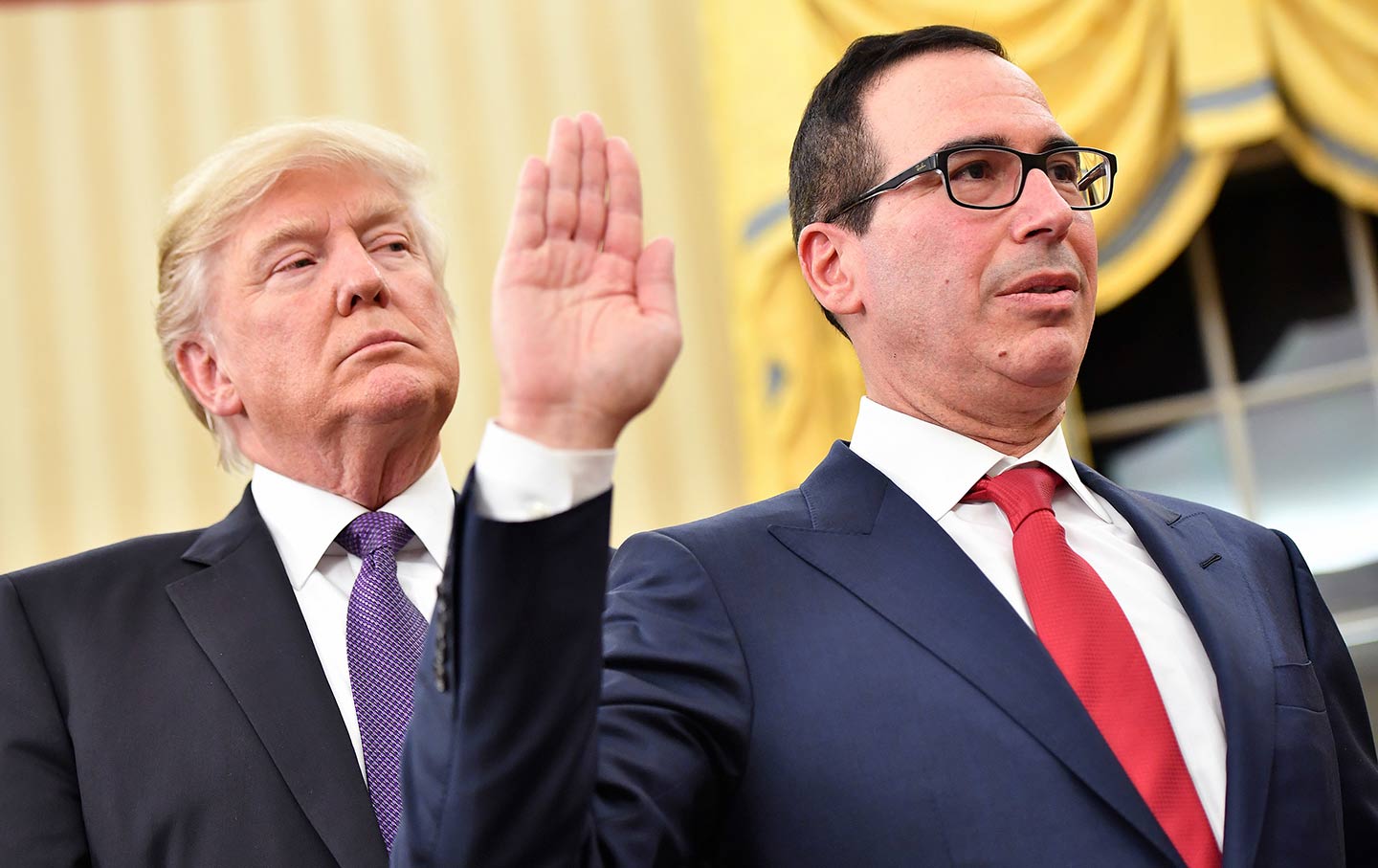 President Donald Trump looks over the shoulder of Treasury Secretary Steven Mnuchin as he is sworn in during a ceremony at the White House on February 13, 2017. (Rex Features via AP Images)

President Donald Trump lies. He lies about the size of his inaugural crowd, about millions of supposedly fraudulent votes, the number of jobs he “saved” at Carrier, terrorist incidents that supposedly go underreported, the crime rate, and other things too numerous to catalog here.

Compared to Donald Trump’s big lie, however, these are mere peccadilloes. As Stephen Mnuchin’s confirmation as Treasury secretary confirms, the big lie is Trump’s campaign promise to clean out the “corrupt political establishment” and “to put the American people back in charge.”

Consider Trump’s final ad of the 2016 campaign. As the camera cut from Washington, to bags of money, to Wall Street, to Hillary Clinton to Goldman Sachs president Lloyd Blankfein, Trump indicted the “global power structure” that “brought the destruction of our factories and our jobs,” that “robbed our working class, stripped our country of its wealth” and “put that money in the pockets of a handful of large corporations and political entities.” He pledged that he would replace the “failed and corrupt political establishment with a “ new government controlled by you the American people.”

That was then. Once elected, Trump has turned his economic policy over to Goldman Sachs alums and a few other Wall Street bankers who are exemplars of that very “global power structure.”

Steve Mnuchin, the new Treasury secretary, is a second-generation Goldman Sachs partner who left the firm to run OneWest, a foreclosure machine that operated fraudulently to strip people of their homes. During his confirmation process, Mnuchin lied about his bank’s use of illegal “robo-signing” to take people’s homes, and failed to report $100 million in assets and an involvement in a Cayman Island tax haven. It was “an oversight,” he claimed.

Perhaps the most influential of all these bankers-cum-Trumpkins will end up being Gary Cohn, the former president of Goldman Sachs and heir apparent to Lloyd Blankfein, who now heads the National Economic Council. With a personal fortune of more than $300 million, Cohn, like Blankfein, was lavishly rewarded during the mortgage crisis for helping to orchestrate Goldman’s “Big Short.” As exposed by the Senate Permanent Subcommittee on Investigations, then chaired by Senator Carl Levin, Goldman managed to escape the mortgage collapse by peddling its toxic mortgages to its clients while laying large bets against them. They packaged the junk as sterling silver while quietly betting on the defaults they knew would come.

The “corrupt establishment” is back in charge. Trump has offered stunts like the Carrier deal to make it seem like he’s helping the “forgotten worker,” and he has fulfilled some promises, like interring the already-dead Trans-Pacific Partnership. But he’s already begun selling his voters down the river.

Waiting on Mnuchin’s desk is Trump’s order instructing him to launch a review aimed at dismantling much of the financial regulation passed after Wall Street’s wilding blew up the economy.

With Gary Cohn beaming at his side, Trump kicked the coming financial deregulation off with an executive order aimed at torpedoing the Labor Department’s pending “fiduciary rule.” That simply requires that investment advisers not cheat their clients out of their retirement funds. For retirement accounts only, investment advisers must put the client’s interest before their own. This would curb the foul practice of peddling investments in the high-priced investment house instruments that the advisers profit them rather than lower-priced funds that would preserve the client’s money. This scam rakes an estimated $17 billion a year out of retiree savings. Cohn, echoing the shameless Wall Street lobby, says it’s too restrictive, and “a bad rule for consumers.” It only deprives consumers of the risk of being fleeced by their advisers.

On banking reform, Wall Street’s particular bête noire is the Consumer Financial Protection Bureau, the sole regulatory agency created by Dodd Frank to protect consumers from the stings and scams of financial con men. In its five years of existence, the CFPB has already recovered nearly $12 billion for 27 million consumers who were ripped off by credit-card companies, by payday lenders, by rapacious auto-loan dealers, or by the big banks themselves.

For example, the CFPB was a leading force in exposing the fraudulent Wells Fargo scheme that involved millions of unauthorized customer accounts. The bank was forced into a $185 million settlement. It has protected veterans from predatory pension schemes, helped low-income consumers ripped off in prepaid credit-card deceptions, and more.

Nevertheless, Representative Jeb Hensarling, chair of the House Financial Services Committee and well-lubricated by generous bank-lobby campaign contributions, wants the CFPB effectively neutered. He called for allowing the director of the CFPB to be fired without cause, and for stripping the CFPB of its supervisory and enforcement powers, eliminating its research functions and terminating its consumer-education programs. Under his plan, the CFPB couldn’t fine banks for defrauding their customers. It could only ask them nicely to stop.

Mnuchin has also already expressed concerns about the Volcker Rule, which limits speculations banks can do with customer money. Mnuchin claims to view it as too complicated. On the campaign trail, Trump echoed the call of Bernie Sanders and Elizabeth Warren for a new Glass-Steagall rule that would go even further than the Volcker Rule. But as the administration moves to repeal large parts of Dodd-Frank, Trump’s campaign rhetoric will fade in the wind.

The Goldman folks will then orchestrate the great looting. Mnuchin risibly told the Senate that there would be “absolutely no tax cut for the upper class,” a pledge belied by every Republican tax plan, including Trump’s.

Routine functions of the federal government will also be outsourced to the financial sector. The administration is reportedly hatching an infrastructure plan premised on public-private partnerships, which Wall Street will be happy to help structure—for a stiff fee and a piece of the action. This will ensure that whatever is built will be designed to return a private profit. The tolls and other fees on our roadways and bridges will line the wallets of the “corrupt establishment” that Trump railed about.

Trump has defended his swampy appointments by arguing he promised to “hire the brightest and the best.” The problem with the failed establishment wasn’t that its members were stupid. It was that their rigged economy served the interests of the few, while the majority of Americans were left out of the deal.

That bad deal will continue. One needs only to follow the money: Goldman Sachs stock is up 33 percent since Trump took office. It gained $4 billion in value on Friday alone, when Trump signed the order going after the fiduciary rule.

This is the big, brazen lie. Trump won by indicting the corrupt political establishment for stealing the jobs and the dreams of the American people. And then he turned his economic policy over to the same crowd. Hold on to your wallets.