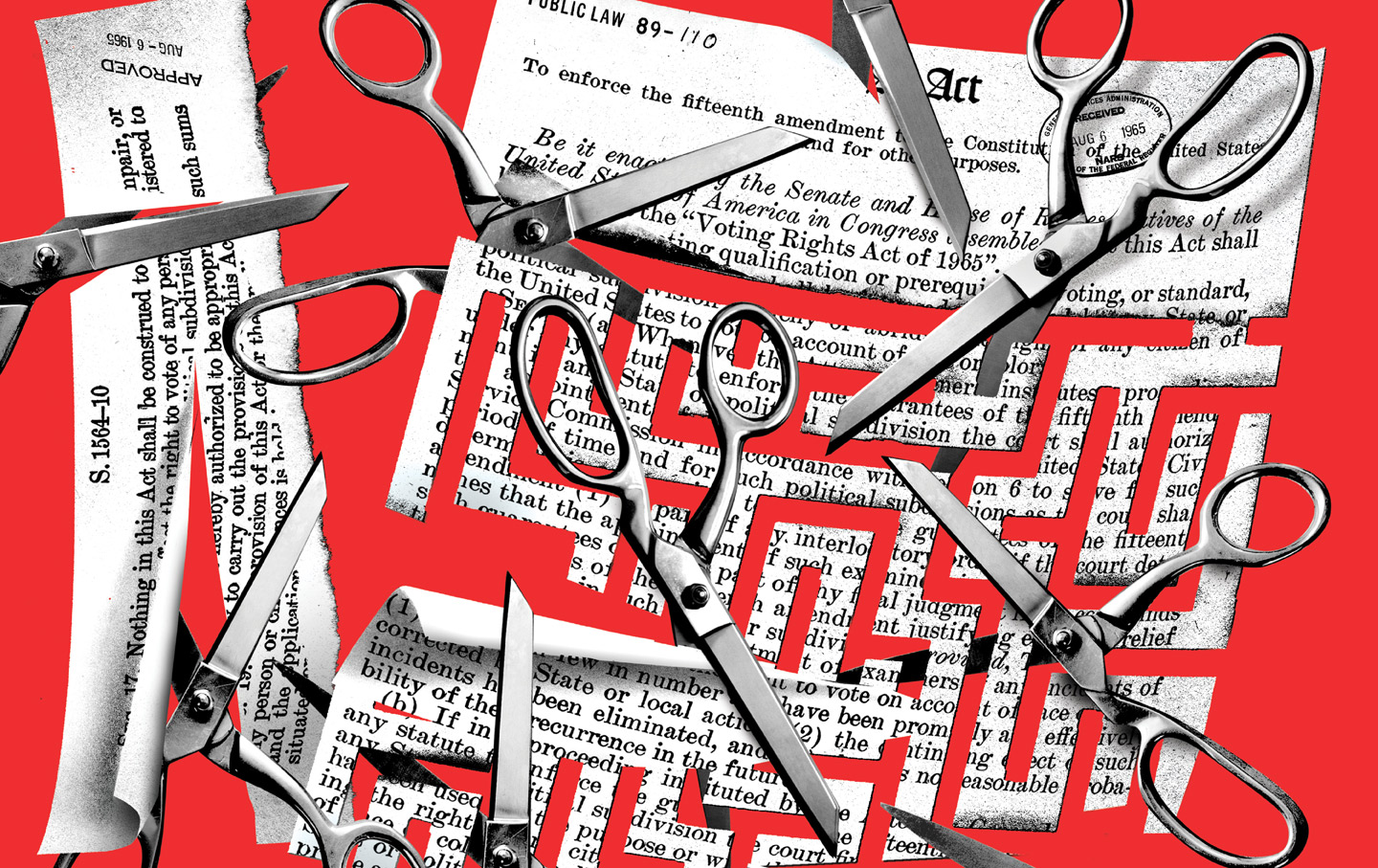 Fred Leidel was born in 1916, before women got the right to vote. At 99 years old, he biked to the polls in Madison, Wisconsin, on Election Day. He designed propeller blades for airplanes during World War II and was an engineering professor at the University of Wisconsin. Everyone knew him at his polling place, Schenk Elementary School, where he volunteers to read to kindergartners.

But for the first time in his life, Leidel was turned away from the polls. He no longer drives, and his faculty ID, which he’d used to vote in the past, wasn’t accepted under Wisconsin’s strict new voter-ID law. “I never had any problems voting until today,” he said.

The poll workers called Molly McGrath of Vote­Riders, who helps people get voter IDs, and she took Leidel to the Department of Motor Vehicles branch in East Madison, where he was issued a new state ID and given a temporary receipt for voting—an option only available because a court order forced the state government to make IDs readily available. Leidel returned to the polls a second time and successfully cast a ballot. If it hadn’t been for McGrath’s assistance, he would have been disenfranchised a month before his 100th birthday.

Not everyone was as determined to vote as Leidel. Margie and Alvin Mueller, who are 85 and 86, respectively, went to vote early in Plymouth. They’ve been married for 64 years and always vote at the same place. But Margie, who no longer drives, wasn’t able to vote because her driver’s license had expired.

Election officials said she had to get a new ID at the DMV in Sheboygan, 25 minutes away. But Margie, a cancer survivor who’s in between radiation treatments, wasn’t up for the trip. “When you’re 85, I guess you don’t count anymore,” she said. Her husband was so angry, he decided not to vote, either.

“I could’ve voted, but when they pulled that crap, I didn’t want to vote,” Alvin said. “We could’ve gone to Sheboygan, but it’s just the idea of it… to pull that crap, when she has a picture ID—what more do you want?” He blamed “the damn Republicans,” who “don’t want Latinos and old people to vote.” The Muellers were both Democrats who would have voted for Hillary Clinton.

The 2016 election was the first presidential contest in 50 years without the full protections of the Voting Rights Act (VRA), because the Supreme Court ruled in Shelby County v. Holder that states with a long history of discrimination no longer need to have their proposed voting changes approved by the federal government. Partly as a consequence, 14 states had new voting restrictions in effect for the first time in 2016—including important swing states like Wisconsin and Ohio.

This was the first presidential contest in 50 years without the full protections of the Voting Rights Act.

We’ll never know how many people were kept from the polls by these restrictions, but in states like Wisconsin, they had at least some impact on the outcome. Donald Trump carried the state by 27,000 votes, but 300,000 registered voters, according to a federal court, lacked the required forms of voter ID. Turnout in Wisconsin was at its lowest level in 20 years and fell by 52,000 in Milwaukee, where 70 percent of the state’s African-American population lives. “We saw some of the greatest declines were in the districts we projected would have the most trouble with voter ID requirements,” Neil Albrecht, executive director of the city’s Election Commission, told the Milwaukee Journal Sentinel.

Wisconsin wasn’t the only state where people had trouble voting. On Election Day, there were 868 fewer polling places in states with a long history of voting discrimination, like Arizona, Texas, and North Carolina. These changes impacted hundreds of thousands of voters, yet received almost no coverage in the media. In North Carolina, as my colleague Joan Walsh reported, black turnout decreased 16 percent during the first week of early voting because “in 40 heavily black counties, there were 158 fewer early polling places.” Republicans set the early voting hours and locations for all 100 counties, and black turnout decreased the most in the 17 counties that had only one polling place for the first week of early voting.

Far too many in the media ignored the GOP’s attack on voting rights. There were 26 debates during the presidential primaries and general election, and not a single question about the gutting of the VRA. Cable news devoted hours and hours to Trump’s absurd claim that the election was rigged against him, while spending precious little time on the real threat that voters faced.

If anyone was rigging the system, it was the Republicans—by making it harder to vote. Evidence of voter fraud never materialized in 2016—except for the case of a Trump supporter in Iowa who voted twice and was caught—but as we saw in states like Wisconsin and North Carolina, voter suppression was all too real.

Now, with Republicans in control of the presidency, Congress, and 69 out of 99 state legislative chambers, attacks on voting rights will get even worse. If Trump appoints a Supreme Court justice in the mold of Antonin Scalia to fill the current vacancy, as he’s vowed to do, there may be a five-vote majority to weaken the remaining provisions of the VRA. Congressional Republicans are likely to push for new restrictions on a national level, such as requiring proof of citizenship to register to vote in federal elections. Trump will staff his administration with right-wing zealots obsessed with voter fraud, like Kansas Secretary of State Kris Kobach, a key member of his transition team.

Things won’t look much better in GOP-controlled states. Voters in Missouri approved a constitutional amendment on Election Day requiring strict voter ID. After taking over the Kentucky Legislature, Republicans now control every Southern state legislature. Republicans in Wisconsin are already vowing to cut early voting after a high turnout before Election Day in cities like Madison and Milwaukee. “We’re probably going to have to look at it again, to make sure that everybody in the state has the same chance to vote,” said Assembly Speaker Robin Vos.

The few bright spots are in blue states like Oregon, which became the first state to enact automatic voter registration this year. The state added 250,000 new voters to the rolls and had an overall turnout of 79 percent, according to state government estimates—among the highest in the country. Voters in Alaska approved a ballot measure on automatic registration, and four other states—California, Vermont, Connecticut, and West Virginia—are or will soon be implementing similar programs. In addition to combating a flurry of bad restrictions, it’s critically important that Democrats and progressives work to aggressively expand voting rights in the places where they have power.

The election results showed that when more people vote, Democrats do better. That’s why the GOP is so invested in voter suppression. History teaches us that the fight for voting rights didn’t end with the passage of the VRA in 1965, and the struggle is far from over today.