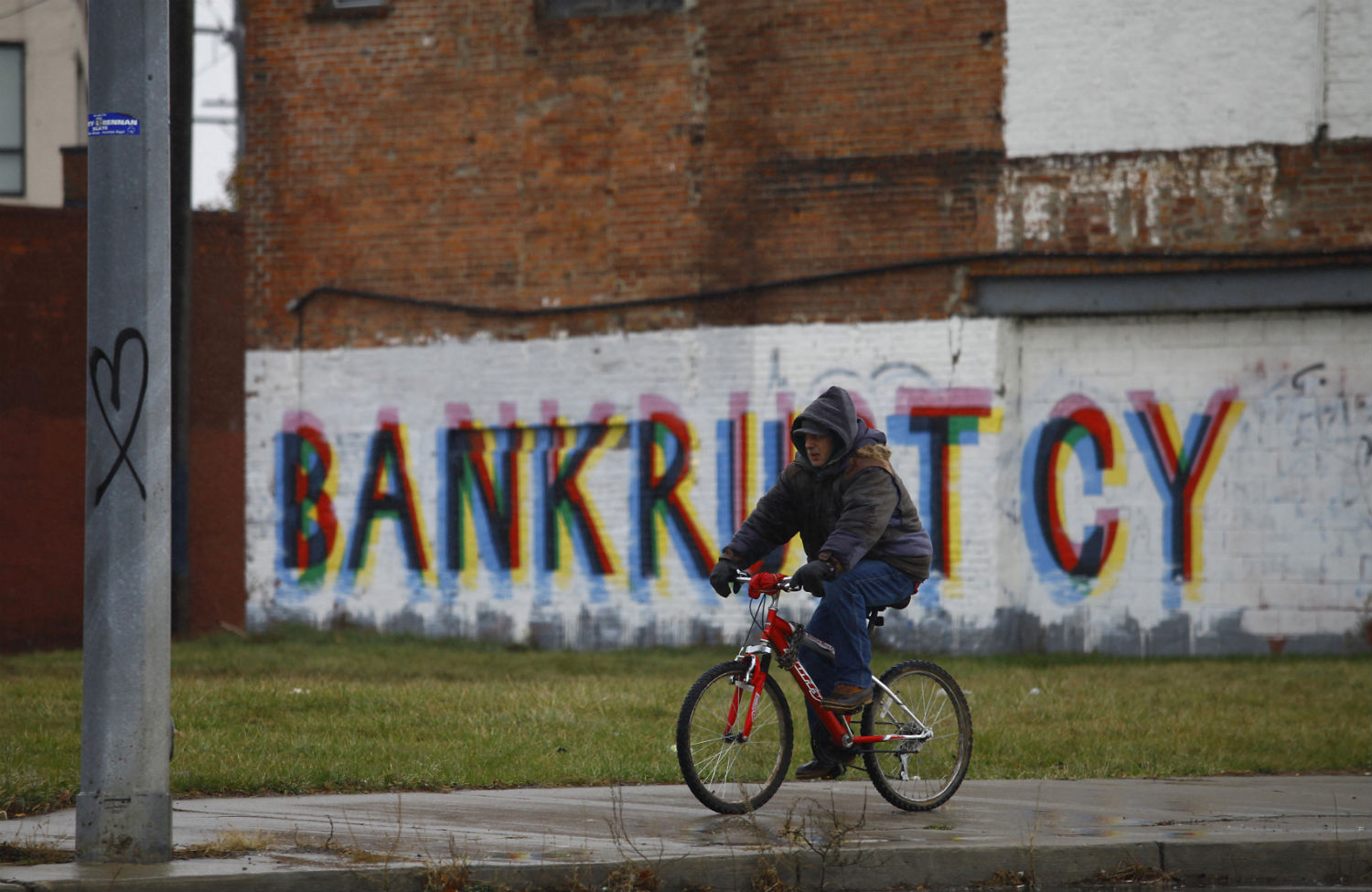 A man rides his bike past graffiti in Detroit after the last hurdle to municipal bankruptcy was cleared on December 3, 2013. (Reuters/Joshua Lott)

Detroit elected a new mayor November 5 and he will take office in less than a month. But the future of this great American city and its citizens isn’t being defined by decisions made by voters on Election Day. It is being defined in federal bankruptcy court—and by an “emergency manager” who has no democratic legitimacy.

With a ruling Tuesday by US Bankruptcy Judge Steven Rhodes, Detroit officially becomes the largest US city ever to enter Chapter 9 bankruptcy. Despite a determination that negotiations with creditors outside of bankruptcy court had not satisfied good-faith requirements, the judge cleared the way for the emergency manager and his law firm to advance a “plan of adjustment” that is likely to include deep cuts in pension guarantees for retired city employees and a “fire sale” of city assets that could result in public utilities and the Detroit Institute of Arts collection being bartered off to private bidders.

What Judge Rhodes has done is not the end of the bankruptcy process. It is merely the beginning. But the process has been framed in a manner that runs the risk of undermining the city’s long-term recovery by taking money away from the most vulnerable residents of Detroit. As Jordan Marks, executive director of the National Public Pension Coalition notes, “In the bankruptcy, the modest pensions of Detroit’s firefighters, police officers, and other city employees could be all but wiped out, even as Wall Street banks continue to extract hundreds millions of dollars from the city’s economy. This is a dark day for people of Detroit who worked hard, played by the rules, and are now at risk of losing everything.”

By Tuesday afternoon, according to Reuters, the emergency manager, Kevyn Orr, had "called on unions to help bridge gaps with the city on planned pension cuts." And he has commissioned the auction house Christie's to assess the value of the art institute's collection — which traces its roots to the 1880s and includes works by Bruegel, Cézanne, van Gogh and murals by Diego Rivera — for possible sale.

There is no question that Detroit, like many American cities, faces fiscal challenges. But instead of assuring that those challenges are met in the most humane and functional manner, the city is being steered into a wrenching process of restructuring that—by all appearances—will be based on flawed math, flawed priorities and an exceptionally flawed understanding of how democracy is supposed to work.

In a groundbreaking new study of Detroit’s finances, the think tank Demos explains that claims regarding Detroit’s debts have been dramatically inflated to make a case that the city must go bankrupt. According to Demos, proponents of the bankruptcy move have manipulated the numbers by combining statewide and city debts. “Detroit’s emergency manager, Kevyn Orr, asserts that the city is bankrupt because it has $18 billion in long-term debt. However, that figure is irrelevant to analysis of Detroit’s insolvency and bankruptcy filing, highly inflated and, in large part, simply inaccurate,” argues the Demos analysis, which was prepared former investment banker Wallace C. Turbeville. “In reality, the city needs to address its cash flow shortfall, which the emergency manager pegs at only $198 million, although that number too may be inflated because it is based on extraordinarily aggressive assumptions of the contributions the city needs to make to its pension funds.”

By relying on what the Demos study identifies as “extraordinarily aggressive assumptions”—and by accepting premises advanced by the same financial institutions that urged Detroit officials to make unwise financial choices—the judge has shaped a bankruptcy process that errs on the side of helping Wall Street rather than the citizens of Detroit.

At the same time, the judge has empowered an emergency manager who has a track record of acting on those “simply inaccurate” premises, rather than the officials just chosen by Detroit voters to guide their city toward fiscal and social stability.

The judge’s decision gives the essential authority to guide the city’s affairs to Orr, the “emergency manager” selected by Republican Governor Rick Snyder, who in 2010 lost the city of Detroit by a 20-1 margin. Though barely 5 percent of Detroit voters thought Snyder should be calling any of the shots regarding their state and city, he is now—via his emergency manager, with the approval of the bankruptcy judge he asked to intervene—calling the shots.

And what of the new mayor, Mike Duggan, a veteran county official and highly regarded manager who won 55 percent of the vote in last month’s election?

“The only authority I’m going to have is the authority I can convince the governor and emergency manager to assign me,” Duggan, a Democrat, told reporters in November. “I’m attempting to persuade them. We’ll see.”

Duggan says he’s “going to do everything I can to advocate on behalf of Detroit’s future in this process. We need to make sure the retirees are treated fairly on the pensions they earned.” But, despite the fact that he will be the city’s mayor, he does not have the final say even on questions of whether the city will keep commitments to retired firefighters and police officers.

This is not the will of the people of Detroit.

We know that because the emergency manager power that Snyder has used to steer the city into bankruptcy, and that the governor and his appointee will now use to guide the city’s affairs, was rejected by the city’s voters in 2012.

Snyder had to develop the new emergency manager law after a previous version of the legislation—which he had used to take over smaller cities—was overturned by Michigan voters in a statewide referendum. In Detroit, 82 percent of voters said they did not want the emergency manager law. But they got it anyway. So it is that, while Mayor Duggan may be assigned some responsibilities, he will not have the clearly defined authority that an elected mayor should have to protect pensions, preserve labor agreements and set priorities when it comes to the delivery of basic services.

This is a vital distinction to recognize as media outlets report on the judge’s decision and the bankruptcy process.

As retiring Detroit City Council member JoAnn Watson reminds us: The city of Detroit did not file for municipal bankruptcy.

“The emergency manager (EM) filed the bankruptcy petition, and he is an appointee of the governor of the state of Michigan based on Act 436—a law formerly known as PA 4—which was repealed by 2.3 million Michigan citizens statewide on Nov. 6, 2012,” explains Watson. “The EM is only accountable to the governor, the EM only answers to the governor, and the EM can only be ‘checked and balanced’ by the governor.”

The new mayor and the new city council will not have the essential democratic authority to “check and balance” the emergency manager—or to guide the process that Watson argues “has clearly been crafted in a right-wing playbook to seize assets, dismember electorate voting powers, dismantle unions and the families/neighborhoods supported by union jobs, disable local elected officials, smear and tarnish the image and viability of Black elected leadership, and broadly claim that the legacy costs related to retiree pensions are largely to blame for the city’s debt crisis.”

Watson’s frustration is real. And appropriate.

Detroit’s greatest challenge has not been municipal governance. It has been deindustrialization, which has shuttered hundreds of factories and left hundreds of thousands of city residents unemployed or underemployed. And that great challenge extends beyond Detroit.

Too many American cities face financial challenges similar to those that have destabilized Detroit. Snyder’s anti-democratic “answer” could well become the model for a response to those challenges that begins by blaming the victims and ultimately denies them a full and effective franchise.

“I believe Detroit and Michigan are ‘test cases’ for certain right-wing agents who want to do all they can to control future elections for this nation’s highest office and other posts,” says Watson. “Voter suppression, including the Supreme Court’s role in gutting the Voting Rights Act of 1965, are not incidental to the myriad of malevolence in Michigan.”

There is a lot more at stake in Detroit, and in Michigan, than one city’s balance sheet.

Our understanding of democracy, itself, is being subverted.

Unfortunately, a federal bankruptcy judge has sided with a governor who could not win an election in Detroit and an approach that Detroit voters rejected.

This has nothing to do with budgeting, debt or broader fiscal matters. Those issues could, and should, be addressed by an elected mayor and city council.

This has everything to do with allowing unelectable and unelected officials—and the interests they serve—to achieve political results that could not be secured at the ballot box.