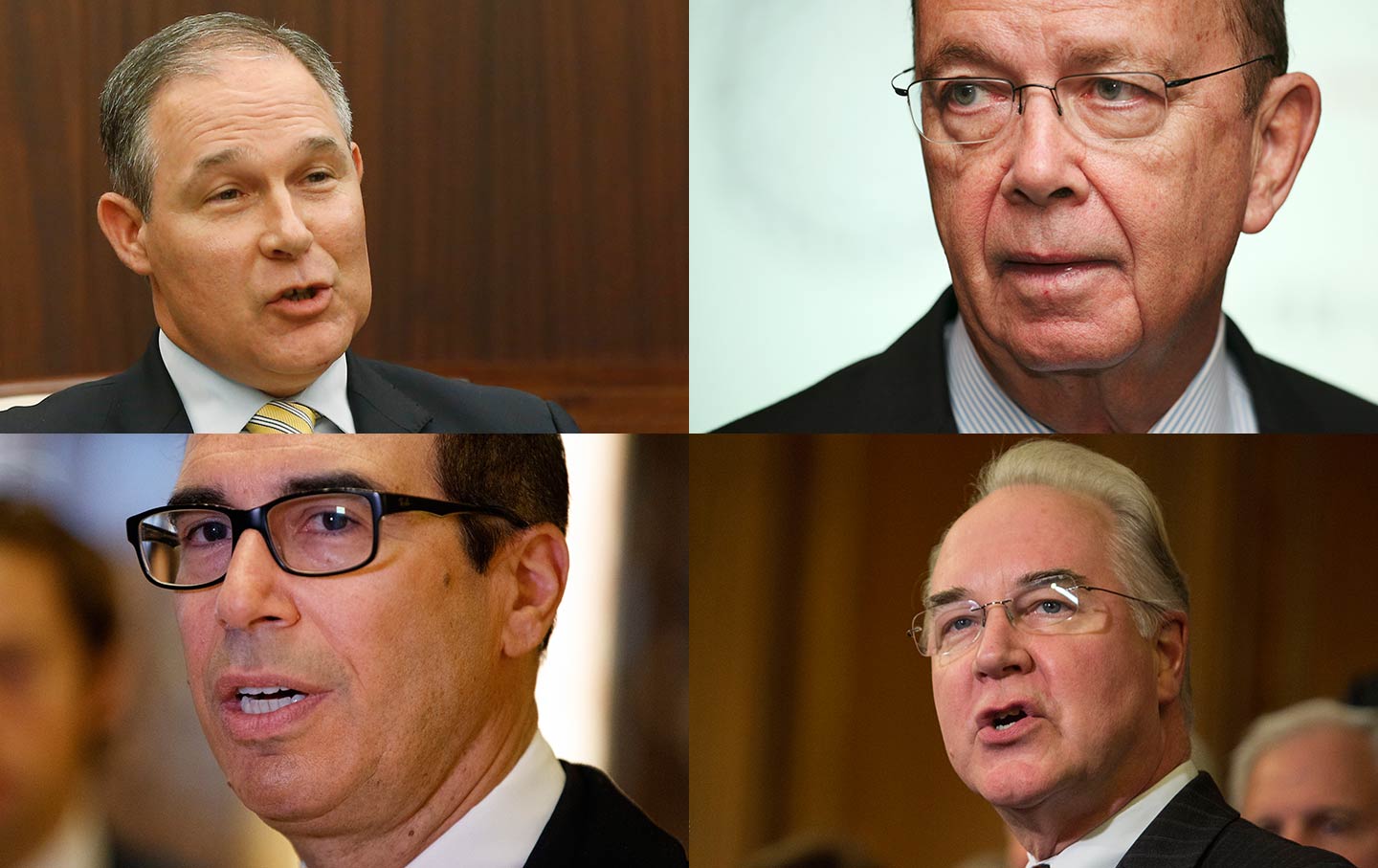 As Donald Trump unveils his cabinet of deplorables, it’s getting hard to imagine how Democrats are going to “pick their battles”—the warning that’s become a cliché of Trump transition coverage (just Google it). The Wall Street Journal reported that even incoming Senate minority leader Chuck Schumer says, “Democrats will pick their battles,” as he singled out Trump’s selection for attorney general, Senator Jeff Sessions, as someone who would be subject to tough Democratic scrutiny at confirmation hearings.

And he should be; Sessions was rejected for a federal judgeship 30 years ago for his blinkered racial views and his persecution of black voting-rights advocates in Alabama while he was a federal prosecutor. But Democrats should be fighting virtually all of Trump’s picks. The president-elect is presenting Democrats with a political opportunity even before he takes the oath of office. The so-called champion of the working class is assembling a gilded cabinet. Not only will it be the richest, ever; it features plutocrats who’ve presided over the hollowing out of the working class Trump pretended to care about. Party leaders should be shouting about this from every imaginable platform.

I could go on, but I’ll stop there. (There’s also his troika of retired generals—Mike Flynn as national security adviser, James Mattis as secretary of defense, and Jim Kelly as homeland security director—who raise separate questions about military influence in the cabinet.)

But so far, presented with these political gifts, Democrats have been fairly silent. They’ve pledged to fight Sessions, and they should, but no one else has come in for much attack, although today Senator Ed Markey said he would oppose Pruitt’s nomination to head the EPA, and Schumer had some tough words for Pudzer as labor secretary. That’s good news, but it’s not enough.

On one level, I understand the need for Democrats to “pick their battles.” They may be more likely to win GOP support to actually block a nominee or two by being selective. But no one has yet marshaled an argument to Trump voters that they’ve been hoodwinked: that the outsider candidate has picked a cabinet of insiders, who make an utter mockery of his promises to look out for the “forgotten man.” Democrats should be making the case, as Ben Adler argues in The Guardian, that Trump is “a self-dealing political profiteer and a tool of the business and political elite.” Jeff Hauser of the Revolving Door Project has suggested that Democrats refuse to consider any appointments until Trump discloses and then divests himself of his global and largely secret financial empire—especially since we can’t trust Trump’s picks to monitor his self-dealing.

Part of the problem is the Democrats have a leadership vacuum right now. President Obama has said he doesn’t see anti-Trump agitation as his role. Hillary Clinton doesn’t seem temperamentally inclined to do that, and at any rate, she’d be dismissed as a sore loser (though she won the popular vote by at least 2.7 million, let’s always remember). House minority leader Nancy Pelosi is formidable on legislative strategy, but rarely stands as the public face of the party. Senate minority leader Harry Reid, a reliable fighter, is retiring. Schumer loves attention, but it seems as though he hasn’t yet decided how hard he wants to fight. There’s no permanent Democratic National Committee chair. Senator Bernie Sanders has been reliably vocal, and while he’s still not a Democrat, he’s been given a leadership role. Here’s hoping he uses it to stiffen his colleagues’ spines for these battles.

Maybe this will start to change after the holidays, when senators begin planning hearings for these nominees. There will be plenty of opportunity for rising stars to shine, by grilling nominees with strong research into their careers, their potential conflicts of interest, and their policy beliefs. But right now Democrats are missing an opportunity to brand the president-elect as a man who’s betraying his base, right out of the gate. They should certainly pick their battles—a lot of them.