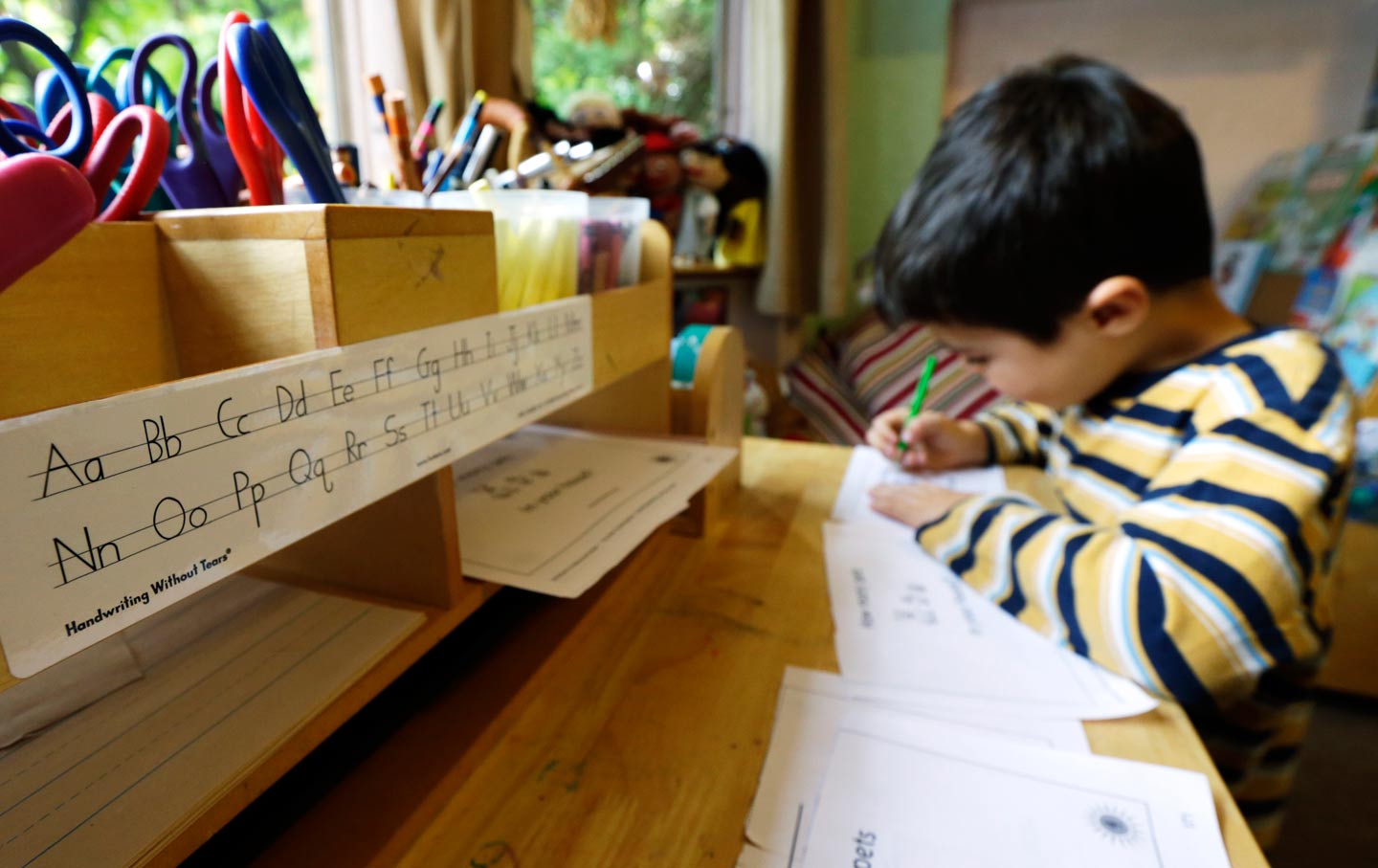 Declan Hart, 4, works at a desk in a pre-kindergarten class at the Community Day Center for Children in Seattle. (AP Photo / Ted S. Warren)

The cost of daycare can drive a family into poverty before a child reaches kindergarten, but it’s also likely to impoverish her teacher first. While preschool programs are expanding nationwide, somehow, they cost parents everything while paying teachers nothing simultaneously. And childcare providers are so underfunded overall that the system leaves both teachers and families impoverished.

Edie Reichard, a childcare center director in Hamden, CT, sees all sides of the struggle, as she stretches sliding-scale fees and government grants to the breaking point: “We have parents who even have a hard time paying the $8 a week…. Since they pay so little, and our grant is only enough to really just barely cover salaries, but not insurance or anything like that, we can’t pay our staff what they deserve.”

Teachers bear the cost as community childcare and preschool programs absorb more financially strapped families. While first-grade teachers might earn $45,000 annually with benefits, pre-Kindergarten teachers earn roughly $27,000 annually on average; hence the irony of preschool teachers who can’t afford childcare for their own kids (in Connecticut, preschool tuition consumes over a third of a typical preschool worker’s salary). This pay scale is also disturbingly out of sync with the profession’s impact; research shows early childhood education is critical to children’s social development and future prospects, yet their teachers are stranded at the margins of the social service infrastructure. Meanwhile, childcare can cost households several thousand dollars a year, even with limited federal subsidies available for poorer parents.

The sector basically has instability, high turnover, and economic frustration baked into its infrastructure—not a good way to start a childhood, or maintain a career. Annual turnover in childcare averages about 30 percent nationwide, which can be disruptive to children’s education and corrosive to overstretched, threadbare programs. More unsustainable still is the regulatory pressure to meet rising professional requirements (Connecticut and many other states require at least a bachelor’s degree for higher-paying lead-teacher positions).

Reichard and other community-based center operators joined the recent Fight for 15 protests because they know only massive public investment could close the gap between what poor parents can scrape together for tuition, and what poor staff need to support their families. “They’ve worked hard for these degrees. And if you’re going to get paid $15 at McDonald’s and not have a degree, why wouldn’t you go there, instead of getting paid $9,” Reichard says, referring to Connecticut’s minimum hourly wage of $9.10. “But I can’t afford [the labor costs] because I can’t ask families to pay anymore…. That’s the main reason that the state-funded center directors are so involved in what’s going on with the SEIU Fight for 15.”

One reason for such economic instability is that the early childhood field is less structured than regular K-12 schools. There are no universal standard requirements for early childhood teachers, though most states are shifting toward career-path criteria like special certifications for caregivers and advanced degrees for head teachers. The workforce’s demographics reflect economic disparities and the diversity of programming. According to a 2014 report by the Center for the Study of Childcare Employment (CSCCE), early childhood educators have greater proportions of people of color and women, and also tend to be poorer and have less educational attainment, compared to K-12 system teachers, who are generally whiter and more credentialed.

On top of the divide between K-12 and pre-K, educators face stiff wage gaps between community settings like Reichard’s center and standard public school. In New York City, for example, a coalition of childcare providers, teachers and family advocates are pressing Mayor Bill de Blasio to provide wage parity in the city’s new universal Pre-K system. Currently senior staff who work in community-based settings, where most universal Pre-K students are enrolled, might earn just half of what senior teachers in school-based Pre-K typically earn.

In New Mexico, the PEOPLE for the Kids campaign has formed a “joint advocacy” network of childcare centers, workers, and parents, supported by the American Federation of Teachers, to demand comprehensive resources for  early childhood infrastructure, with accessible programs for low-income families and livable wages for workers. They oppose cutbacks to either wages or services, because both access and program quality are essential.

As an education system ingrained in struggling communities, the early childhood sector carries high risk and infinite potential. As CSCCE points out, a growing portion of the country’s young children come from communities of color, many of them from immigrant households, and a diverse workforce can meet their needs for culturally and linguistically competent education: “For example, minority teachers typically hold higher expectations for minority children, and… often are more attuned to the challenges related to poverty, racism and immigration status that many children of color face in their communities.”

Just as early enrichment programs can offset disadvantage in childhood, educational support can foster career advancement for teachers who otherwise face financial barriers. According to CSCCE Director Marcy Whitebook, “public support of education and training are critical to maintaining diversity and reversing some of the stratification by race and ethnicity currently at play in the field.”

To bring economic sustainability to the workforce, early childhood educators need not only higher pay, but career advancement opportunities. Teachers in turn require higher education investments for professional retraining. In the absence of steady federal or state funding streams, the professional scholarship program TEACH Early Childhood has supported more than 16,000 scholarships for early childhood educators in fiscal year 2015, with a focus on boosting wages for teachers of color. But for a low-wage workforce estimated at 1.2 million educators nationwide, too many teachers still face an impossible task: providing invaluable enrichment on the cheap.

Tolanda Barnette, childcare worker and mother of three, testified at a recent public hearing in North Carolina: “There is something really ugly about being someone who is passionate about caring for children, goes above and beyond to care for children, but not being paid enough… to have enough to care for my own.”

The tenderest years of childhood chafe against this ugly reality: the system designed to uplift disadvantaged children, demands that poor parents pay more than they can afford, and that poor teachers work for less than they’re worth.