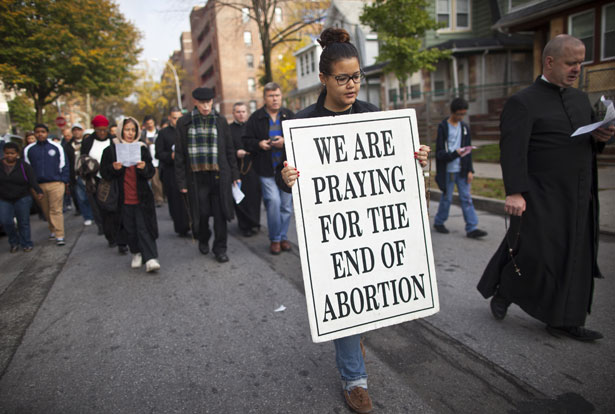 I’m writing this column before the results of Tuesday’s election are known, but I’ll go out on a limb and predict that abortion opponents will do very well. Assuming that’s true, we’ll be hearing a lot from them. We’re all familiar with their talking points—day-before-birth abortions, confused women, coercion, pro-choicers as a “death cult,” whatever that means. But surely that’s not all they’ve got. So in the spirit of rational discourse, here are some questions for abortion opponents—real questions, not rhetorical—that I’ve tried to frame in an open-ended way. I’d love to hear some thoughtful answers.

1. Illegal abortion. You often talk as if banning abortion would drastically reduce or even end it. You don’t seem very concerned about death and injury to women who have illegal procedures. (In fact, you tend to discount pro-choice claims about the danger of illegal abortion, while portraying legal abortion as vastly unsafe.) But what about the simple fact that illegal abortion is widespread in countries where abortion is virtually banned? In Brazil, for example, there are between 1 and 4 million abortions a year—at least as many as in the United States in a much smaller population—and more than 200,000 women land in the hospital with injuries or infections. Do you believe illegal abortion can be prevented, and if so, how? If not, what makes criminalization worth so much harm to women?

2. Compromise. You present pro-choicers as intransigent and yourselves as wanting modest restrictions: a twenty-week ban, stricter regulation of clinics, waiting periods. We both know that this is a tactic, and your goal is the end of legal abortion—yet most Americans don’t share this goal. Do you see any chance of a stable compromise? What would it look like?

3. Birth control. It is obvious to most Americans that birth control is the way to lower the number of abortions. Yet the fight over the Affordable Care Act’s no-co-pay birth-control provision is only the most recent demonstration that many abortion opponents want to restrict contraception too. True, a few anti-choice politicians propose putting the pill over the counter, but no major antiabortion organization supports contraception, and many opponents are redefining modern methods—the pill, the IUD and emergency contraception—as “abortifacients.” Is contraception a lesser evil than abortion or just more of the same evil? If the former, would you accept universal provision of birth control to any and all, including teens?

Follow-up: Would you support such a provision if it was limited to condoms, diaphragms and other methods that no one, not even you, can call dangerous or abortion-causing?

4. Poverty. Six in ten women who have abortions are already mothers. More than 40 percent are poor, and many more are on the edge. Maybe some of them would have the baby if they had more support: healthcare, daycare, housing, jobs—and protection from job discrimination for pregnant women and mothers. Charity can’t begin to supply all these needs, and the antiabortion movement is firmly allied with the Republican Party, which cuts social programs wherever it can. What do you offer to women who want to end a pregnancy because they can’t support another child?

5. Men. You want to force women to carry every pregnancy to term, but the fact that men can easily walk away does not seem to interest you much. What are the responsibilities of men to avoid getting women pregnant, to support them while they are pregnant, to provide for mother and child? And what measures would you promote to enforce those responsibilities?

6. Equality. Contraception and legal abortion have played a crucial part in enabling women to advance in education, the workplace, self-development and public life. How do you see women continuing to progress if they cannot control when they bear children? Do you think equality of the sexes is desirable? If so, how would you make it compatible with ill-timed pregnancy and motherhood? If not, what do you think is the appropriate place of women?

7. Personhood. You believe the fertilized egg is a person, with the same right to life as a baby or, for that matter, a 40-year-old. But abortion is not the only threat to this tiny being’s life. What about failure to implant, miscarriage and, of course, in vitro fertilization and stem cell research? (Well, actually you’ve managed to hamper that last item quite a bit.) Should IVF be banned if it destroys pre-embryos? Should every miscarriage be investigated, as is the death of a born child? Why focus exclusively on women’s behavior, when so much pre-birth death has other causes?

8. Murder. If zygotes are people, abortion is infanticide, a very serious crime. Kevin Williamson, a correspondent for National Review, has said that women who have abortions should be hanged. That’s going pretty far. After all, if every woman who had an abortion were executed, who would raise the children? But if abortion becomes a crime, what do you think the punishment should be? I’m assuming you approve of jailing the provider, but what about the parent who makes the appointment, the man who pays, the friend who lends her car? Aren’t they accomplices? And what about the woman herself? No fair exempting her as a victim of coercion or manipulation or the culture of death. We take personal responsibility very seriously in this country. Patty Hearst went to prison despite being kidnapped, raped, locked in a closet and brainwashed into thinking her captors were her only friends. Our prisons are full of people whose obvious mental illness failed to move prosecutors or juries. Why should women who hire a fetal hit man get a pass?

9. Last Question. Are there any pro-choice arguments that resonate with you? Which ones?

Looking forward to hearing from you.