Twenty nineteen was the year Hong Kong exploded, and Jeff Wasserstrom’s Vigil: Hong Kong on the Brink, out on February 11, is a concise guide to a “city of protest” that until recently was better known as an apolitical capital of commerce.

Wasserstrom, who teaches modern Chinese history at the University of California at Irvine, has been a close observer of Chinese protest movements for over three decades. “It did not feel as though things were wrapping up,” he told me after returning from his latest visit to the city in mid-December. “It is important to keep in mind Hong Kong’s capacity to surprise.” 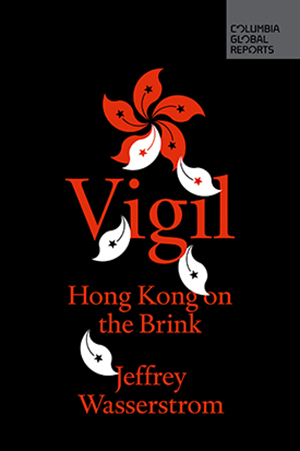 Ross Perlin: This past June 4, you attended a 30th-anniversary vigil for the Tiananmen massacre along with some 180,000 Hong Kongers. Protests involving more than a quarter of the city’s 7.4 million people began less than a week later. To what extent, and in what ways, is the memory of Tiananmen a force in Hong Kong’s politics of protest?

Jeff Wasserstrom: The memory of Tiananmen remains a powerful and protean force in Hong Kong. Most obviously, the June 4th Massacre serves as an example of the Chinese Communist Party leadership’s intolerance for dissent. When sustained protests take place in Hong Kong, no matter what specific cause inspires them, one thing the activists involved hope to show is that it is still possible to do something in the city they love that it has been impossible to do in mainland cities since the Tiananmen struggle was suppressed.

The Hong Kongers Building a Case Against the Police

RP: Hundreds of thousands of Hong Kongers fled the city between 1989 and 1997, when the city was handed back to China by the British, bolstering an already substantial diaspora in Canada, Australia, the US, the UK, and elsewhere. What role is the Hong Kong diaspora playing in the protests, and in determining the city’s future more broadly?

JW: The role of the diaspora has been important in the movement so far—and could easily become even more so in the years to come. There is a sense in which Hong Kong has gone from being a colony within one empire to being a different sort of colony within a different sort of empire, albeit one whose metropole is much closer. Discussions within diasporic communities and organizations have been crucial to many anti-colonial movements in the past, and it makes sense that they will do so in this one as it goes forward.

There are also examples—the singer and activist Denise Ho is an important one—of people who left the city on their own or, as in her case, with their parents, and have since returned and are deeply committed to the place.

RP: You write about the emergence over the last year of an alternative national anthem, “Glory to Hong Kong.” Are we seeing a new, quasi-national Hong Kong identity coming into being—even, or maybe because, it moves its advocates “into the domain of treason,” as you put it?

JW: I like the term quasi-national for Hong Kong identity. I actually think that quasi-national sentiments may be fairly common and worth taking seriously in various settings, whether or not there is any chance of them leading to independence and whether or not people really want them to. What I mean is that one can have a fierce attachment to a city or a region as well as to a country, and those can really matter. We see very different kinds of ebbing and flowing of these attachments in Scotland and Catalonia, sometimes related to what is going on locally and sometimes to what is happening more broadly.

I don’t really want California to break away from the United States, but there are moments when I wish it could and moments when I take intense pride in things like it having a governor who praised the Paris climate accord when the president was pulling the country out of it.

RP: Hong Kong is a city of staggering inequality. To what extent do class politics underlie what has appeared to be a very broad-based movement?

JW: Inequality plays a complicated role in Hong Kong politics. There is a view that the government is generally in the hands of tycoons who care about staying rich and staying in Beijing’s good graces, more than about truly serving the ordinary people of Hong Kong. This persists even though the current chief executive, Carrie Lam, is from a non-elite family and is a longtime civil servant. The broad support for the movement across class lines is striking, as is the fact that, unlike 2014, when protests were focused on Hong Kong Island and in just one working-class district of Kowloon, Mongkok, this time there have been demonstrations in all kinds of neighborhoods. On the other hand, though, calls for general strikes have had only limited effect.

RP: Local elections to Hong Kong’s District Councils on November 24, 2019—directly following some of the largest protests—resulted in a sweeping victory for pro-democracy [anti-PRC] forces. Is there any hope in such elections?

JW: The electoral victory was a big boost for the protesters, and it was important in undermining the argument the government and Beijing-backed media were making about a “silent majority” of Hong Kong residents’ being happy with the status quo. It’s hard to see, though, how elections alone will resolve major issues, given that the complex arrangements in the city were designed to ensure that the legislature always has a solid bloc of pro-Beijing members. Still, the LegCo [Legislative Council] elections coming up in September will provide a focal point for activism.

RP: What forces in the city are pro-PRC, and could they make a comeback?

JW: It would be wrong to write off pro-PRC sentiment completely. There are many residents of Hong Kong who moved there relatively recently. One trend the movement needs to be sensitive to is coming across as hostile toward everyone who speaks Mandarin and has only recently moved to Hong Kong. Hong Kong at its best, though, is wonderfully inclusive. Figuring out how to keep that tradition alive is a real challenge, especially when the movement is being continually misrepresented in Mandarin-language media as a violent one backed by foreign forces. In spite of that, thinking long term, the more protesters can do to reach out to recent migrants. Many on the mainland may have related grievances, after all.

RP: The Hong Kong Human Rights and Democracy Act, passed by Congress in late 2019, imposes sanctions against Chinese and Hong Kong officials who commit human rights abuses and mandates an annual review of Hong Kong’s political status, tying it to the US–Hong Kong trade relationship. Do you think this or any similar actions will have much impact on events in Hong Kong?

JW: I have deeply mixed feelings about moves like these and their prospects for success. On the one hand, they can give an important shot in the arm to protesters, make them feel people far from Hong Kong care about their efforts. On the other hand, anything the US government does can be used by Beijing to support its misrepresentation of the movement as the creation of “foreign forces.” When American flags are waved at rallies in Hong Kong, that just plays into the hand of Beijing even more.

What is important to watch is whether, or at this point how, international criticism of different CCP policies fuse. The horrific human rights abuses in Xinjiang are finally getting sustained international attention. I see worrying moves in different parts of the PRC as interconnected—something Rian Thum and I wrote about for The Nation in 2018—and it looks like this idea may be gaining some traction in various countries, including the US. There is now more talk than there was just a few months ago about a possible boycott of the 2022 Beijing Winter Games, due not just to Xinjiang or to Hong Kong but to a combination of moves that show that Xi is taking the PRC in a disturbing direction. Hong Kong activists have been doing more lately to show their awareness of interconnections between what is happening to the city they love and in other places within and beyond the borders of the PRC. I saw signs at the big December 8 demonstration in Hong Kong (during which, by the way, there were few American flags or Union Jacks to be seen) that expressed solidarity for those suffering not just in Xinjiang but also Tibet.

RP: Are the current protests a purely Hong Kong phenomenon, or do they somehow keep the horizon open, or indicate a future, for dissent in China?

JW: What Beijing has feared most about Hong Kong protests, in 2014 and again this year, has been that they would have a contagion effect and trigger unrest on the mainland. The mainland authorities have worked overtime and moved quickly to snuff out any expressions of solidarity with the Hong Kong struggles from their side of the border, but these have been quite limited. Chinese mainland cities have sometimes surprised observers, even expert ones, just as Hong Kong has. Social movements are fascinating to study in part because they so often take unexpected turns. For now, I don’t see signs of a resurgence of large-scale dissent on the mainland.