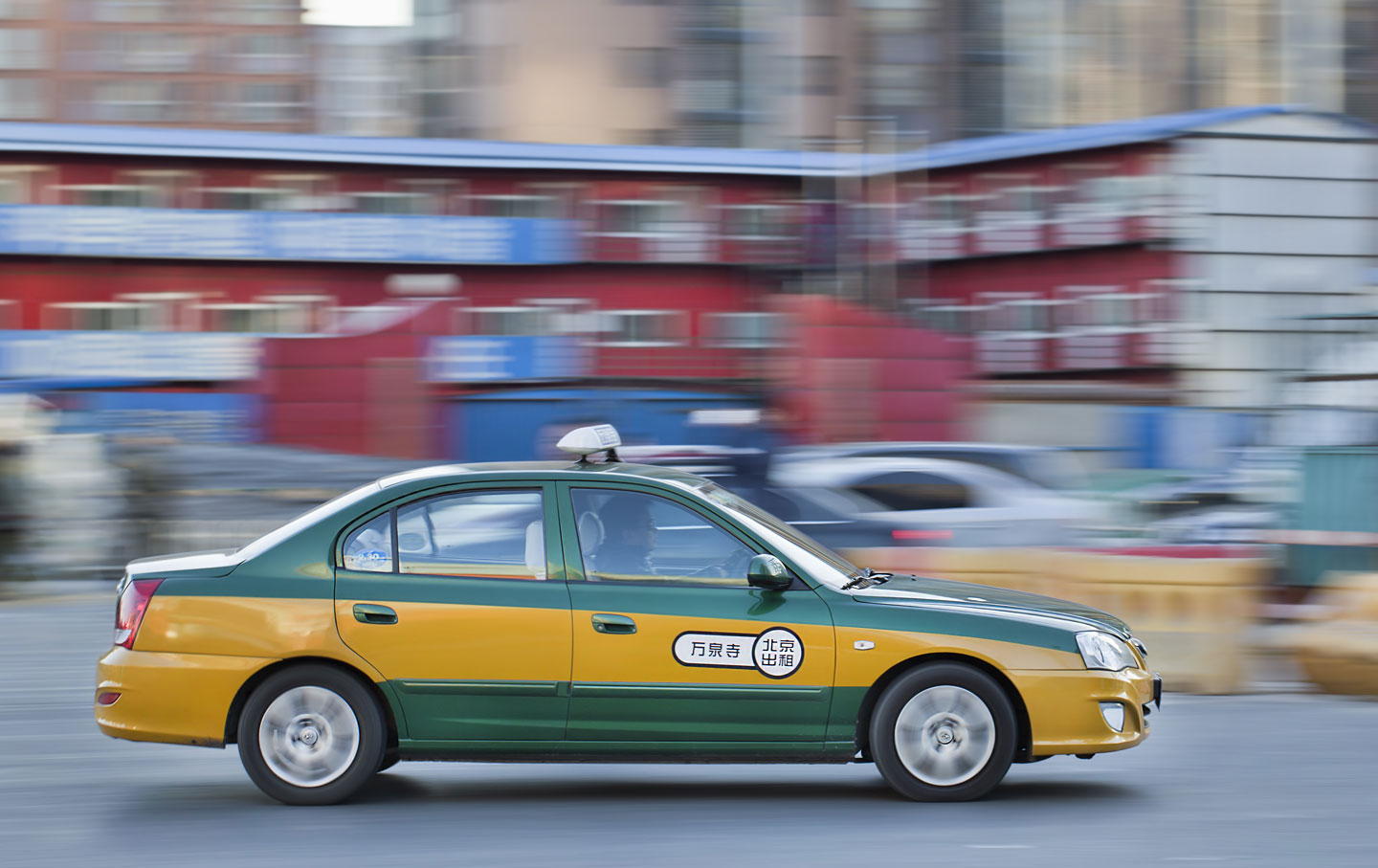 In many cities of the “developing” world, the cabbie is the modern-day town crier—a local oracle of political grievances and on-the-ground economic analysis. These days, though, China’s cabbies are also foot soldiers on globalization’s latest battlefront, driving a revolt against the sharing economy.

Hundreds of cab drivers have gone on strike in cities across China to protest the invasion of a new rival: a rash of ride-sharing companies rapidly flooding the streets with slick marketing and nimble digital platforms. Angry drivers are pushing back with clever protest hacks.

According to China Labour Bulletin’s reports on more than 20 taxi labor actions in recent months, drivers of Uber and the other big ride-hailing app, Didi Kuaidi, should beware of “fishing,” a tactic drivers use to jam the gears of mobile “black cab” services. In May, a strike of Tianjin cabbies was sparked by an ad hoc street battle involving luring unauthorized drivers with a mobile hail and swarming them, as regular cabbies form a flash mob–like blockade (sometimes corralling him to help local police apprehend the unauthorized driver).

Old-school cabbies complain of being displaced by ridesharing and nickled-and-dimed by service companies.

In Changchun, Chengdu Province, hundreds of drivers launched a two-day strike, leading to a cab blockade and repeated police confrontations. Like drivers in Suzhou, Fuzhou and other cities, drivers complained not only of unfair competition from app-based drivers, but also the crushing cost of plying their trade. For example, Changchun drivers complained of having to fork over 240–280 yuan in daily contracting fees, leaving them with a tiny fraction of that in take-home pay at the end of a shift.

Unlike many of the strikes that have erupted in traditional Chinese workplaces like factories or construction sites, the wave of taxi protests show collective action by the dregs of the petite bourgeoisie; taxi drivers were some of China’s original entrepreneurs in the Reform Era, after all. But the explosion of ridesharing apps has spurred mass opposition, paralleling the traffic-stopping strikes against exploding rideshare services across Europe.

Everywhere, the complaint is the same: ride-sharers don’t play fair, skirting regulations and municipal taxi-employment qualifications, while charging market rates that undercut standard cab prices. And both old-school cabbies and rideshare drivers themselves, complain of being nickle-and-dimed by heavy operating costs and unfair labor constraints imposed on their business by cab service operators, whether via an app or a local franchise.

Yet taxi strikes long predate China’s rideshare revolution—in 2008, a strike erupted in the southern city of Chongqing in which “passengers and taxi drivers were beaten and cars smashed,” according to Quartz and Caijing. (One intriguing aspect of that campaign was the support of now-disgraced local Communist Party Secretary Bo Xilai, who, in a populist gesture, “called for a taxi driver union during a roundtable discussion with drivers and citizens,” noting that cabbies “should have an organization to more effectively and regularly make their appeals.”)

Today, the taxi sector remains largely unorganized and dominated by local cab management companies. And although Uber is not fully legal across China, it has broken into roughly 11 select urban markets with plans to add dozens more in the coming months. The Shanghai Uber pilot, which operates as a nonprofit, is aggressively recruiting by offering extras to drivers and perks to consumers, according to the Los Angeles Times: a more luxurious ride in a fancier car, with deals on holiday items such as “order[ing] a lion dance team to perform at their home or office” for Chinese New year. It’s not clear whether drivers and customers will lose interest in the product if Uber becomes more regulated or scales back its subsidies.

Whether they’re driving for Didi (which has eclipsed Uber in the rideshare market), Uber or their local cab company, ride-share injects further instability to an already precarious sector. No start-up, no brand name, is going to cure drivers’ economic insecurity: only unity can.

A grassroots taxi-worker collective may provide a worker-owned alternative to traditional cab driving.

China Labour Bulletin reports that taxi workers of Xiangtan have declared independence from local cab managers with their own worker-led startup, United Taxi, outlined in a recently published list of grievances: exorbitant operating expenses, a lack of autonomy, and corruption among local officials and regulatory agencies. The mismanagement was ruining the trade many had joined in the 1990s to be their own bosses (having emerged from the ranks of “mainly unemployed workers and landless peasants”), “plundered our right to earn a living,” and “obstructed our rights under the law.”

While drivers were asserting private ownership, they also championed collective worker control. According to Kevin Slaten of China Labor Watch, these nominally self-employed drivers share the same common plight as other liminal workers as they navigate China’s “modernization”: “while competition rises and puts downward pressure on taxi driver wages, living costs across China continue to rise.… drivers face the same challenging question as other members of the Chinese working class: how do I improve the living standard of myself and my family when wages are only keeping pace or even falling behind costs?”

The drivers’ desire to reclaim power over their trade, is reflected in the lyrics of their rap anthem, translated in The New York Times, which defies the rideshare hegemony’s slick branding with a rebellious sensibility.

Thirty years of the driver’s life see how many dreams?
Hands on the wheel, foot on the gas, just to provide for one’s family.
Drivers work day and night to move mountains.
No matter how bitter, or how tired, it’s tough to follow the dream.
Same life, same fate,
Through such adversity we struggle.
Same vicissitudes, same calamity,
Against future difficulties, we will strive together.
Hand in hand we will walk forward defending our rights,
And let the world know we are all drivers.

Workers like the Xiangtan cabbies represent the front lines of a new precariat, and perhaps the vanguard of organizing on a wild economic frontier. So ridesharing might “disrupt” their business by flooding China’s mean streets, but legions of taxis are gunning to defend their turf.