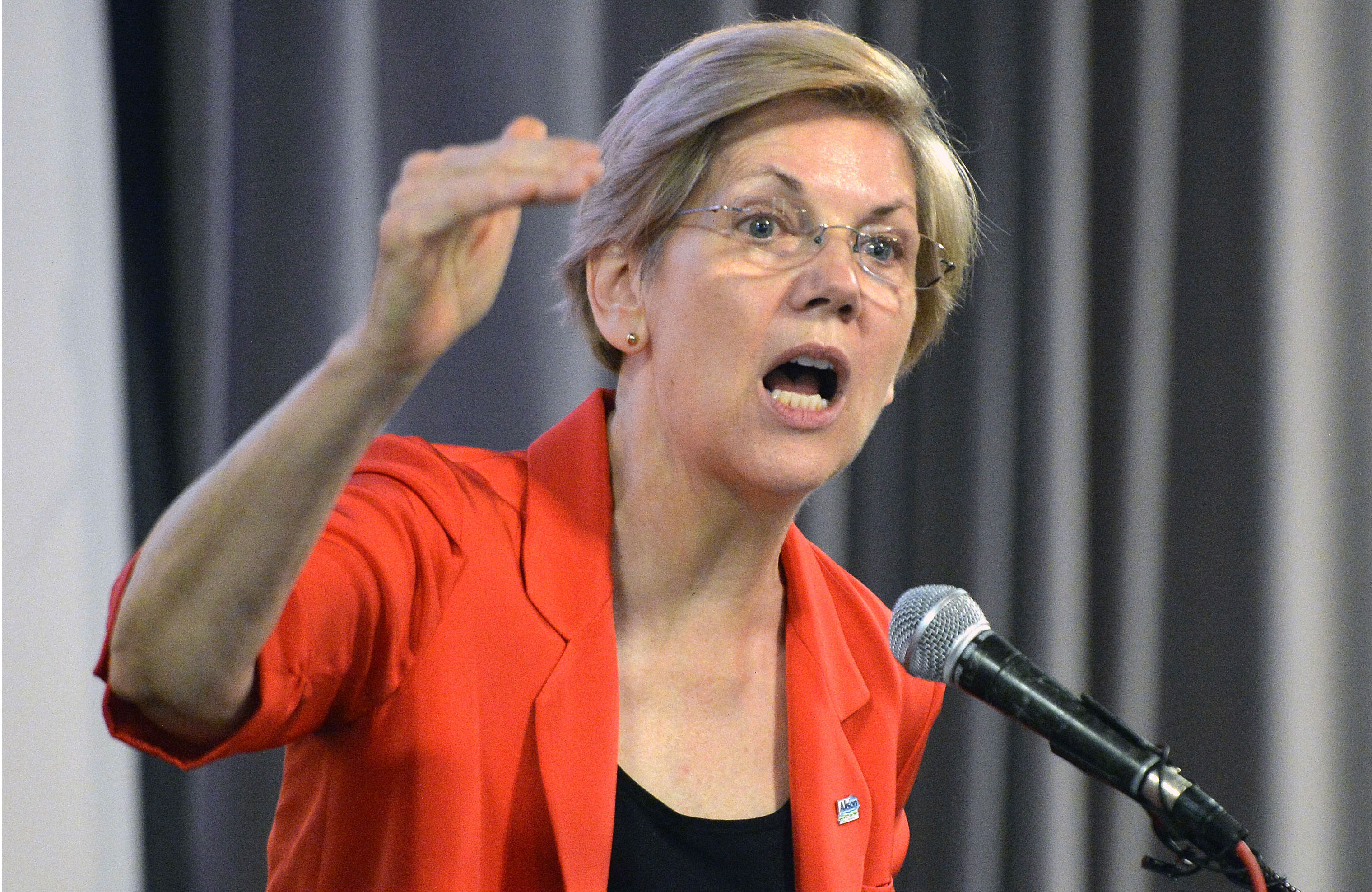 If Elizabeth Warren ran for president, a key part of her campaign—if not the centerpiece—would likely involve how to restructure the financial sector in a less dangerous and more productive way. Dodd-Frank was by many accounts a good start, but it’s clear the economy is still over-financialized and too-big-to-fail banks continue to pose an existential threat.

Warren isn’t running for president, but she unveiled that exact agenda in a sweeping speech Wednesday in a conference at the Levy Institute in Washington. It advocated an array of specific, often ambitious policy proposals, many of which have circulated in Washington for years and that Warren, at various times, has already called for.

But tied together in one place, and packaged as a clear call for structural and not just technocratic changes, a blueprint emerged for how Warren thinks Democrats should attack continued financial reform. Whether purposeful or not, the speech was timed exactly to start of Hillary Clinton’s 2016 presidential campaign.

Her ideas fit into four basic categories: first, getting tougher on bad financial actors, particularly big banks, and presenting them with actual legal accountability for malfeasance. Second, Warren outlined how to change the basic structure of the country’s largest financial institutions so their very existence doesn’t threaten the economy nor taxpayer money via inevitable bailouts. Third, she outlined how to change tax policies that incentivize financial risk-taking and instability. And finally, Warren called for tougher regulations on the shadow-banking sector that was a huge contributor to the 2008 crash and which remained largely untouched by Dodd-Frank.

Under no conceivable set of circumstances could most of this happen in the current political climate. Rather, it’s a world Warren wants to see—“She has outlined what a functional Congress and a willing president could do,” Bartlett Naylor, the financial policy advocate for Public Citizen, told The Nation.

Warren openly criticized the Obama administration’s lack of criminal prosecutions related to the 2008 crisis, declaring that “the Department of Justice doesn’t take big financial institutions to trial—ever—even when financial institutions engage in blatantly criminal activity.” She pointed to the overuse of deferred prosecution agreements, in which big banks get a sometimes-large financial penalty but don’t face any further repercussions, nor even admit guilt.

Use of deferred prosecution agreements for large corporations has spiked dramatically under Obama and Attorney General Eric Holder, with the same corporations sometimes receiving several such agreements. Justice entered into 27 such agreements in 2013, compared with eight in 2004. Warren said “no firm should be allowed to enter into a deferred prosecution or non-prosecution agreement if it is already operating under such an agreement—period.” She also said any agreements with financial firms going forward should have “mandatory minimum” fines equal to “at least every dime of profit generated by their illegal activity.”

Also on the enforcement front, Warren called for a vote by the Federal Reserve Board of Governors on major enforcement decisions. In 2013 the Federal Reserve and the Office of the Comptroller of the Currency reached a $9.3 billion settlement with mortgage servicers for improper foreclosure on millions of homes. Warren later found that the Fed Board of Governors didn’t vote on the settlement—widely seen as too weak—and that all the decision-making happened at the staff level.

Warren further called for congressional action to allow the Consumer Financial Protection Bureau to police the auto-loan industry, which it is largely prohibited from doing in the Dodd-Frank legislation that created the bureau. Warren said “the auto-loan market looks increasingly like the pre-crisis housing market” and that immediate oversight is needed.

She also advanced familiar ideas for shrinking the size of too-big-to-fail financial institutions: Warren advocated for a bill that would cap the deposits, liabilities, and assets of large financial institutions. Senators Sherrod Brown and Ted Kaufmann proposed an amendment to this affect to Dodd-Frank, but it failed. Warren also called for reinstatement of the Glass-Steagall division between commercial and investment banking, and for limits on the Federal Reserve’s ability to provide emergency lending to big banks. “The prospect of receiving low-cost loans from the Fed completely undermines market discipline—big banks are free to take big risks, knowing full well that the Fed will be there to bail them out if things go south,” she said.

Several changes in the tax code, such as closing loopholes that allow financial institutions to write off large bonuses and limiting the ability of banks to fully deduct interest payments, are needed, according to Warren. She said both would shift incentives away from short-term corporate decision-making and cash-hoarding. She also boosted a financial transactions tax on high-volume traders, which she said would “push sophisticated trading firms to invest in companies for the long haul and strengthen our markets.”

Warren stressed that these big structural changes—breaking up the big banks, limiting bailouts and increasing prosecutions—would shift the political-economic advantage away from large financial institutions. “Too much reliance on a technocratic approach also plays right into the hands of the big banks,” she said. “Regulatory solutions that pit the government against giant banks too often get diluted over time with loopholes, carveouts, and rollbacks, each of which favor a few well-connected firms over everyone else.”

Without a doubt, if Washington went down the path outlined by Warren it would set off an Armageddon-like showdown with the US financial sector. But in an attempt to pre-empt some of the war-on-banks rhetoric, Warren presented these changes as fundamentally pro-business.

“[F]or too long, the opponents of financial reform have cast this debate as an argument between the pro-regulation camp and the pro-market camp, generally putting Democrats in the first camp and Republicans in the second. But that so-called choice gets it wrong,” Warren said. “Rules are not the enemy of markets. Rules are a necessary ingredient for healthy markets, for markets that create competition and innovation. And rolling back the rules or firing the cops can be profoundly anti-market.”