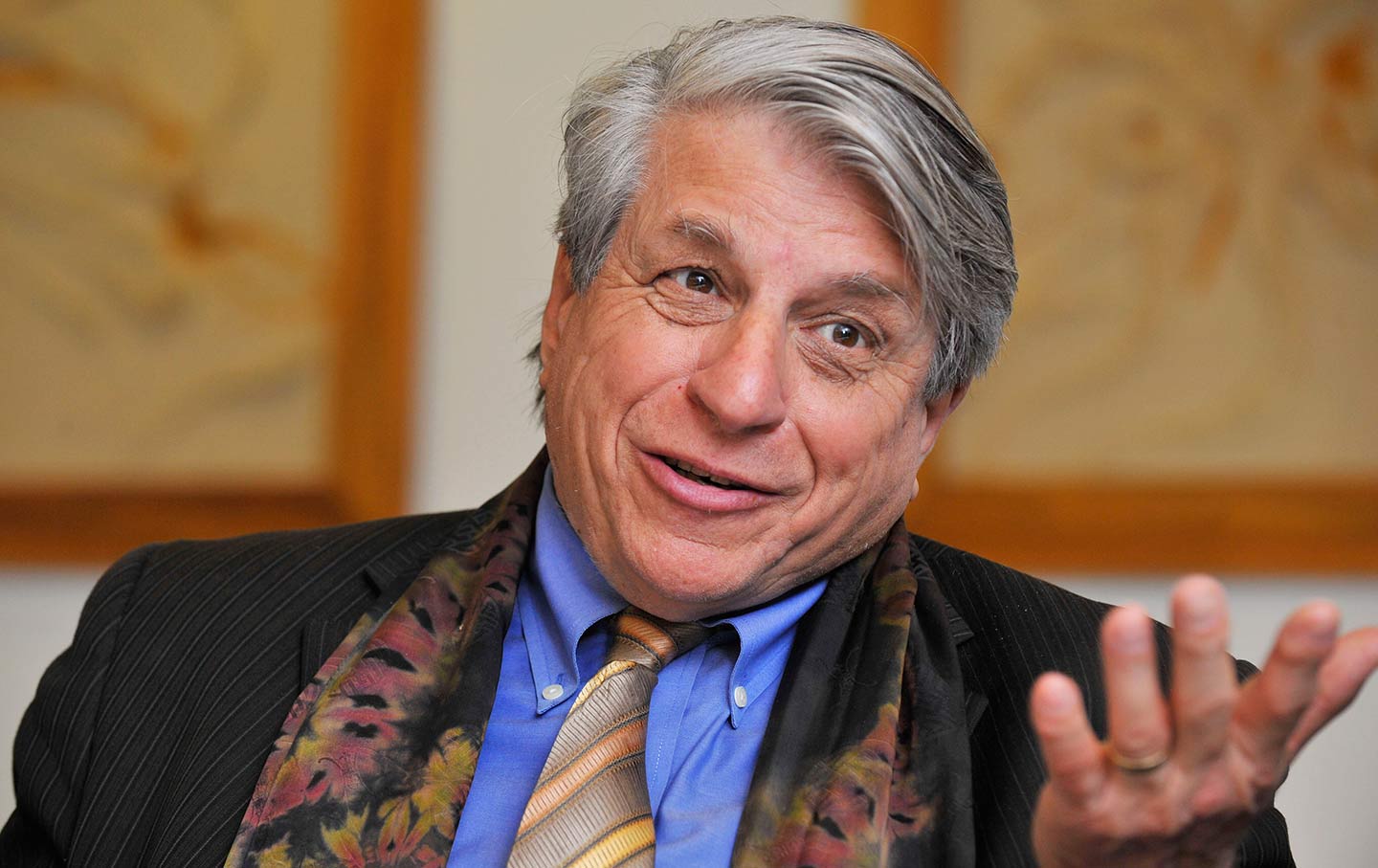 Benjamin Barber, who has died at age 77, was an agile, adventurous, and enthusiastic scholar who believed that big ideas were needed to address big challenges. So he thought those big ideas, wrote groundbreaking books to put them in context, and formed movements to advance them.1

No public intellectual thought so very differently from Donald Trump–a simplistic businessman-turned-president whose ideas are so small, and so frequently wrongheaded, that they promise to inflate rather than address pressing problems–as Dr. Benjamin Barber. But what made him so vital, and what makes his death after a four-month battle with cancer such a profound loss, was his willingness to wade into the great debates of his time, to stir controversy, and to point in radical new directions.2

Barber rejected the fearmongering of the right—and of the crony-capitalist and self-absorbed elites who imagine themselves to be “centrists”—and proudly embraced trust, connection, and cooperation. He objected to the world as it is—”dominated by rival multinational corporations and banks, and shaped by competing ideologies and religions that often deny each other’s core convictions”—and proposed the world that might be.3

What distinguished Barber was his determination to ground his thinking about the future in statistics, science, and scholarship. He was idealistic. But his idealism was realistic. Arguing that a deep understanding of the economic, social, religious, and technological issues of our times could ease divisions, Barber sought to clear the way for “strong democracy.”4

Benjamin Barber: “The cosmopolitan voice is...the voice of cities, and it is the natural antidote to Trump.”

“In a strong democracy people–citizens–govern themselves to the greatest extent possible rather than delegate their power and responsibility to representatives acting in their names,” he wrote in his groundbreaking 1984 book Strong Democracy: Participatory Politics for a New Age.5

“Strong democracy does not mean politics as a way of life, as an all-consuming job, game, and avocation, as it is for so many professional politicians,” argued Barber. “But it does mean politics (citizenship) as a way of living: an expected element of one’s life. It is a prominent and natural role, such as that of ‘parent’ or ‘neighbor.’”6

The corruptions of contemporary politics, and the narrow range of media coverage of campaigns and governance, led Barber to seek new avenues for connection and cooperation. His brilliant response to the rise of right-wing nationalism, outlined in books such as If Mayors Ruled the World: Dysfunctional Nations, Rising Cities (2013) and the forthcoming Cool Cities: Urban Sovereignty and the Fix for Global Warming (2017), underpinned his response to Trump’s election, which he explained in a pair of widely circulated articles for The Nation: “Can Cities Counter the Power of President-Elect Donald Trump?” and “In the Age of Donald Trump, the Resistance Will Be Localized.”7

Anticipating and celebrating the resistance to Trump just days after the election, the Distinguished Senior Fellow of Fordham University’s Urban Consortium (and former Distinguished Senior Fellow at Dēmos, founder of the Global Parliament of Mayors, and chair of American Civilization at the École des Hautes Études en Sciences Sociales in Paris) explained that, as the federal government turned toward nationalism, local governments could and should serve as the essential beacons of pluralism:8

Seen from a global historical perspective, the disconcerting truth is that Donald Trump and his voters are sailing not merely in the face of the winds of change but against history’s dominant trends: global demographics are against him, as are American demographics; the reality of urbanization is against him; the mobility of peoples is against him; and the growing dysfunction of national sovereignty on an irreversibly interdependent planet is against him. In this world without borders, where no one nation can solve global problems alone and walls are not so much malevolent as irrelevant, the cosmopolitan voice is also history’s voice—reality’s voice—and a viable American voice, too. It represents a majority of the world’s population, four-fifths of its GDP, and speaks for our inexorable urban destiny. We cannot allow it to be lost in the noise of parochial national xenophobia, or self-indulgent recrimination about why Democrats lost, for it speaks for us, too.9

The cosmopolitan voice is, of course, the voice of cities, and it is the natural antidote to Trump. Look carefully at the electoral map: It is not, as pundits now insist, the victory of the heartland, from Pennsylvania and Ohio to Wisconsin and Michigan, over the two liberal coasts; it is the victory of suburban, exurban and rural counties over cities—blue islands found in every red state in the nation. And it is this national, gerrymandered electoral map, mediated by an undemocratic electoral college, that prevented the urban vote from winning the White House—even though it won the majority. I say this not to recriminate but to focus on the real division of America, which is urban/rural right across the land, not coastal/interior.10

It was never enough for Barber to come up with a great theory. He sought, always, to link ideas with action. To his last days, he was engaged with a project to raise the voices of cities in the US and globally. In the fall of 2016, mayors from around the world convened the inaugural Global Parliament of Mayors in The Hague–an event inspired by Barber’s books and theories. Early in 2017, he joined Richard Florida and Jonathan Haidt in New York to frame a vision for “Empowering Cities Under the New Administration.” In the final weeks of his life, Barber met with mayors from South Africa, France, Britain, and the United States to advance the cause; his last tweet featured a picture of the scholar with his friends Tavis Smiley and Marc Steiner discussing “the importance of #globalcities and #localresistance to Trump.”11

“In our interdependent world, cities have not only the obligation but the right to achieve solutions to global issues,” Barber explained. In one of his last interviews, he argued that “Cities are going to become the most important, constructive alternative to a Trump agenda. Over the last 10 years we have already seen a powerful emergence of cities as primary spaces for progressive and majority action, for the protection of diversity, for dealing with immigration to the US, higher minimum wage, gender relations and so on.”12

Barber’s urban activism was global and, as was to be expected with so bold a thinker, it was really just a part of a broader vision of international interdependence. Following the September 11, 2001, attacks on the World Trade Center and the Pentagon, Barber (whose 1995 book Jihad vs. McWorld: How Globalism and Tribalism Are Reshaping the World) became required reading in that period) joined a global group of intellectuals, political leaders, and artists in issuing a “Declaration of Interdependence” that recognized “our responsibilities to the common goods and liberties of humankind as a whole” and pledged to work:13

To guarantee justice and equality for all by establishing on a firm basis the human rights of every person on the planet, ensuring that the least among us may enjoy the same liberties as the prominent and the powerful;14

To forge a safe and sustainable global environment for all–which is the condition of human survival–at a cost to peoples based on their current share in the world’s wealth;15

To offer children, our common human future, special attention and protection in distributing our common goods, above all those upon which health and education depend;16

To establish democratic forms of global civil and legal governance through which our common rights can be secured and our common ends realized; and17

To foster democratic policies and institutions expressing and protecting our human commonality;
and at the same time,18

To nurture free spaces in which our distinctive religious, ethnic and cultural identities may flourish and our equally worthy lives may be lived in dignity, protected from political, economic and cultural hegemony of every kind.19

Extending upon the thinking of President Franklin Delano Roosevelt, who proposed his Four Freedoms for people “everywhere in the world”; first lady Eleanor Roosevelt when she campaigned for a Universal Declaration of Human Rights; Republican presidential nominee Wendell Willkie, who wrote of “One World”; and Vice President Henry Wallace, who began using the word “interdependence” in the 1930s; as well as the thinking of contemporary environmentalists such as Barry Commoner and David Suzuki; the new declaration championed by Barber and his allies renewed an old idealism and framed it as a new necessity.20

Barber: A strong democracy means “politics (citizenship) as a way of living: an expected element of one’s life.”

In this interregnum of Trump and Trumpism, and of parallel-isms in other countries, fools imagine a competition between globalism and nationalism. But, of course, it is really a competition between those who exploit differences to maintain old orders and old corruptions versus those who recognize our interdependence and seek to enliven it with a fresher and stronger democracy.21

Donald Trump took his side–that of the past.22

Benjamin Barber took the opposite side–that of the future.23