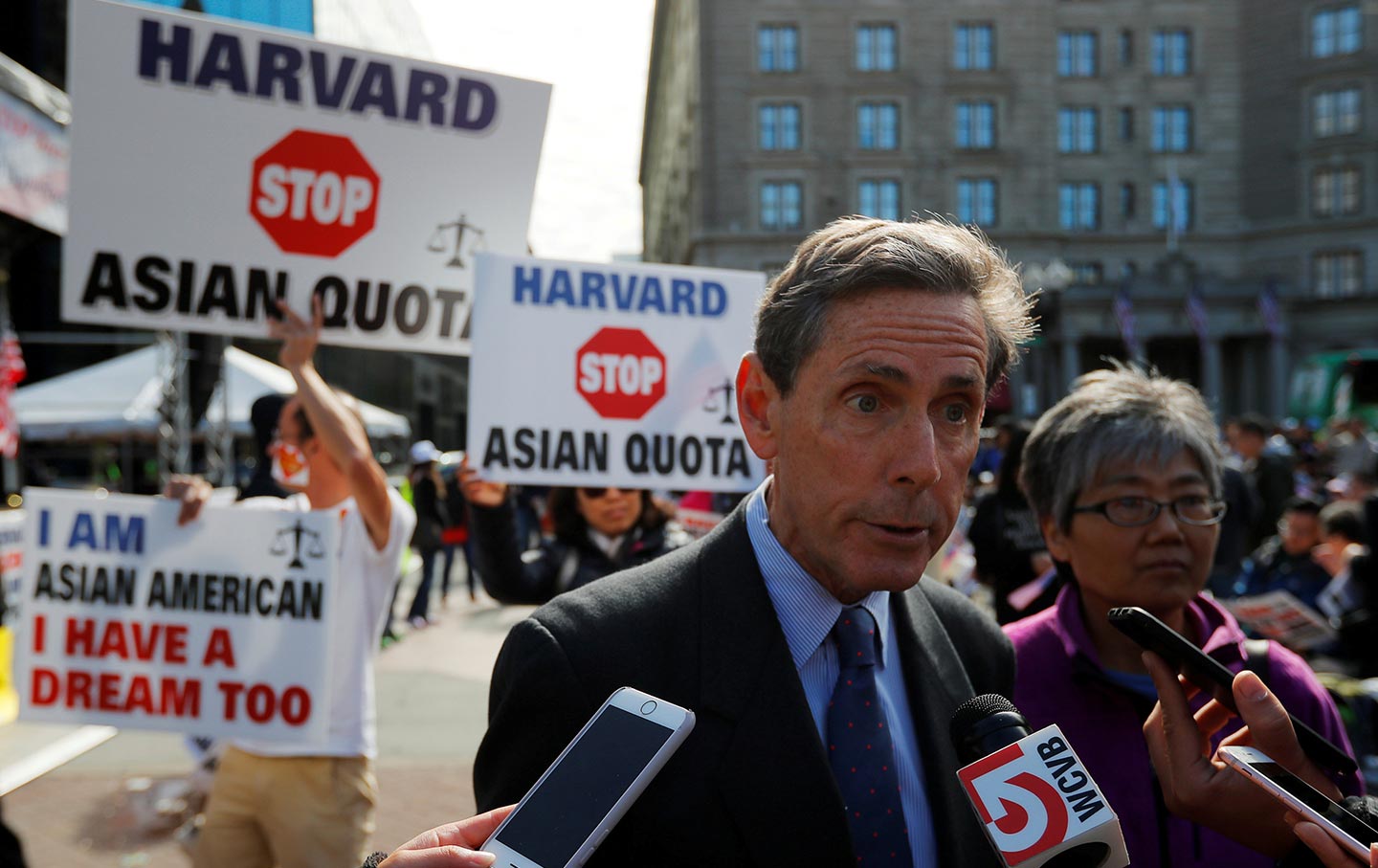 On September 30, US District Court Judge Allison Burroughs ruled against the plaintiffs who had challenged Harvard University’s race-conscious admissions program. It was a vindication of Harvard’s effort to admit a diverse student body on all counts—but perhaps a temporary one, as the case will almost certainly make its way to the US Supreme Court, where a conservative majority may be poised to end race-conscious admissions. Much of the coverage of the case notes that this is the first major anti–affirmative action lawsuit featuring plaintiffs who aren’t white, but it could otherwise read as another installment in the long-running war between white conservatives such as Ed Blum, who found the plaintiffs and initiated the lawsuit against Harvard in their name, and supposedly liberal university administrators and their black and Latinx constituents. Yet one important aspect of the case has gone unnoticed: Conservative, affluent, mostly first-generation Chinese Americans are now mobilizing and organizing into a formidable anti–affirmative action fighting force on a national scale. Their determination to end race-conscious admissions is creating an unprecedented synergy with the agenda of white conservatives.

In May 2015, less than a year after Blum formed Students for Fair Admissions (SFFA) in order to file a lawsuit against Harvard, a self-described “Coalition of Asian American Associations” led by two Chinese American organizations—the Asian American Legal Foundation and 80-20—filed their own complaint against Harvard with the Office for Civil Rights in the US Department of Education and the Civil Rights Division of the US Department of Justice. The complaint, which echoes the SFFA brief and quotes long passages from it, is clearly intended as a companion piece. At the time, the DOJ, under President Obama, took no action on the complaint. Under President Trump, however, the DOJ proved more receptive: It announced its own investigation of Harvard, rescinded Obama-era guidelines on affirmative action in education, and urged schools and universities to stop using race in their admissions decisions. In August 2018, the DOJ filed a “statement of interest” in support of the plaintiffs in the Harvard case.

The Asian American Legal Foundation (a predominantly Chinese American organization) came into being for the express purpose of challenging race-conscious admissions in US education. It was initially formed to file the lawsuit Ho v. San Francisco Unified School District (1996), which successfully dismantled the race-conscious admissions plan at the renowned Lowell High School—a plan that had been enacted to diversify the student body pursuant to an NAACP lawsuit—on the grounds that it discriminated against Chinese American students. The Lowell plan had set out diversity guidelines, including a single-group cap of 45 percent. Each Asian group was considered separately. Since only Chinese students were bumping up against the cap, the elimination of the plan benefited them—but not necessarily other Asian students, who were benefiting from the other diversity provisions. 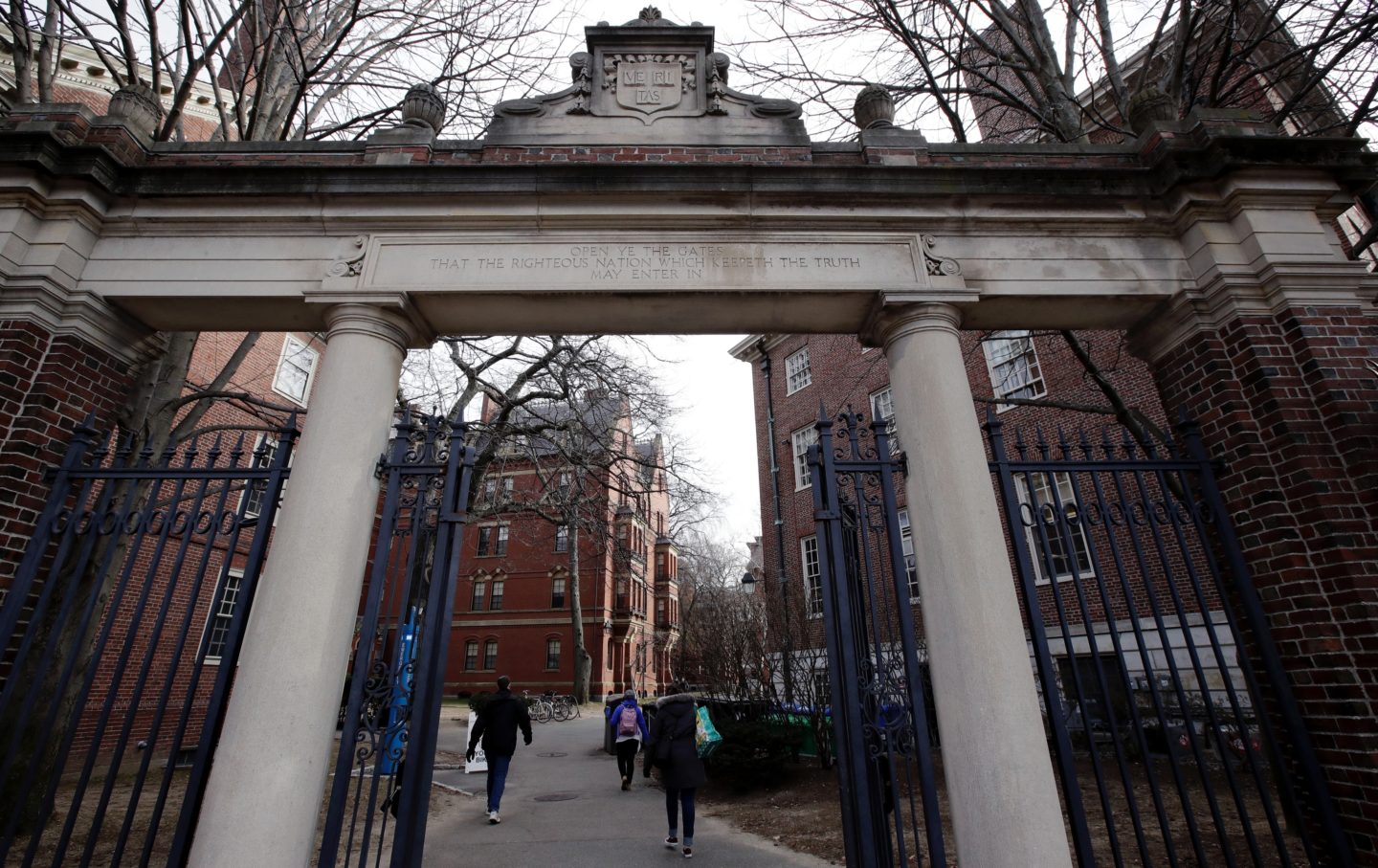 Since that success, the AALF has sketched out a distinctive, Asian-centered anti–affirmative action argument in amicus briefs filed in the two most recent US Supreme Court cases on the matter, Grutter v. Bollinger (2003) and Fisher v. University of Texas, I and II (2013, 2016). Their argument posits that Asian Americans, who suffer discrimination like other minorities, are additionally burdened by race-conscious admissions programs designed to benefit blacks and Latinx people. In Fisher I, the AALF’s argument culminated in this climactic claim: “Grutter will be seen as the Plessy of its generation.” In other words, Grutter—the case in which the high court upheld race-conscious admissions at the University of Michigan Law School—was comparable to Plessy v. Ferguson (1896), the case in which the high court put its imprimatur on Jim Crow and ensured its continuation for another half-century. In this view, affirmative action is, for all intents and purposes, segregation, and Asian American is the new black.

The Students for Fair Admissions brief in the suit against Harvard echoes the AALF line: Asian Americans, doubly burdened by discrimination, are the worst-off group of all. Again, there is an analogy to Jim Crow. Asian Americans are, according to the brief, comparable to the black schoolchildren whose efforts to integrate schools in the South were met with “massive resistance to racial equality.” Note that this analogy casts Harvard admissions officers, however improbably, in the role of die-hard segregationists. Plaintiffs are both trading on the moral authority of the black struggle and displacing blacks from their own history—in order to end a policy that has significantly increased the numbers of black (and Latinx and Native American) students on American campuses.

Conservative Chinese American organizations have not confined themselves to writing legal briefs. They have been tireless lobbyists as well, and were principally responsible for the defeat of California’s pro–affirmative action measure, Senate Constitutional Amendment 5, in 2014. The amendment was on track to pass when Chinese Americans mobilized to fight it. Their all-out lobbying effort compelled three Democratic Asian American state senators to reverse course on the measure, contributing to its defeat. One of the organizers of the lobbying effort, a first-generation Chinese lawyer/engineer, expressed the racial views that underwrite Chinese America opposition to affirmative action: “When we [Chinese] came to this country, most of us did not have anything. We made it because we are hardworking, hard-studying…. I would almost take offense to say that we should be united with Latinos and African Americans just for the sake of getting benefits, because that’s not where our values are.”

It is the convergence of this nascent, conservative Chinese immigrant nationalism with an older, conservative white nationalism that is driving anti–affirmative action politics today. The right began deploying Asian Americans as “victims” of affirmative action as far back as the 1980s, and now Asian Americans are deploying themselves. What binds the two nationalisms together is a studied disavowal of the anti-black racism that has shaped American institutions, laws, and mores, coupled with an insistence that race-conscious policies—and not racism itself—are the main obstacle to racial justice.

Conservative Chinese Americans may compare themselves to black Americans, but anti-Asian discrimination, where it persists, is not analogous to anti-blackness. Like whites, even the worst-off Asian Americans—those burdened by refugee status, lack of citizenship, poverty, language barriers, and more—enjoy the boon of being not-black in an anti-black society, as we can see from looking at figures on a range of phenomena, including mass incarceration, police violence, housing segregation, job discrimination, and exposure to environmental harms.

Most Asian Americans support affirmative action. The conservative Chinese Americans pursuing self-interest under the cloak of racial justice are in the minority, but their intensity has earned them outsize influence. Progressive Asian American advocacy groups have taken them on in court, but in order to counter their arguments in the public sphere, there is no alternative to debunking in the clearest terms the damaging notion that race-conscious admissions render Asian Americans the new blacks.

In any case, it may be too late when it comes to the Harvard case. For 40 years, white conservatives have tried and failed to dismantle race-conscious admissions. Now, with their new Asian American allies, they may finally succeed.