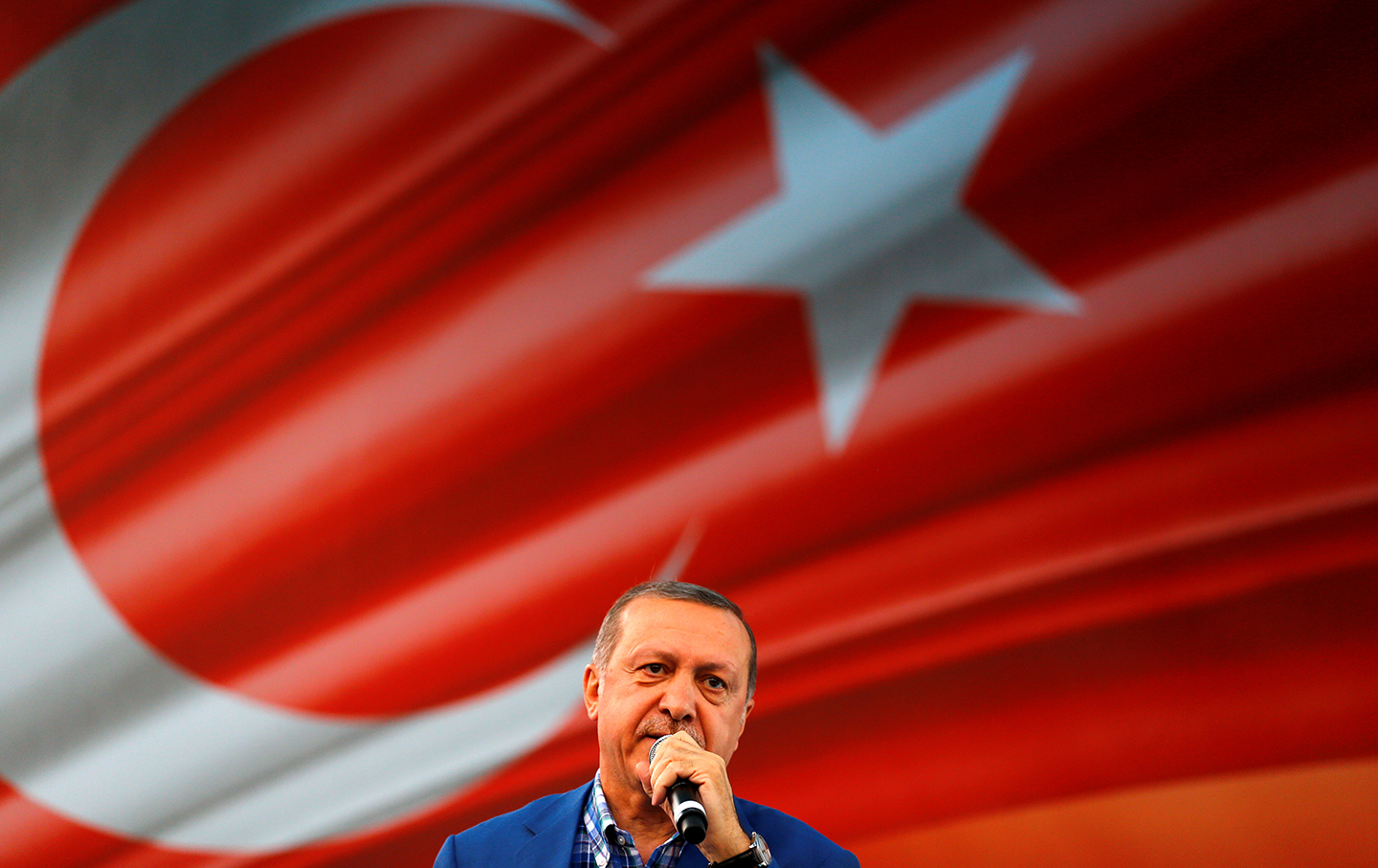 Istanbul— “Your organization is terrible,” Donald Trump shouted at a CNN reporter at his January 11 news conference. “You are fake news.”1

Pundits across the United States and around the world were quick to comment on the president-elect’s shocking behavior, some observing that it smacked of authoritarianism.2

Not Recep Tayyip Erdogan. The Turkish president congratulated Trump for standing his ground.3

“During the Gezi protests and the PKK terror campaigns, the unity and solidarity of the Turkish nation were attacked,” Erdogan said, referring to the Kurdistan Workers’ Party, during a meeting in Ankara the day after Trump’s press conference. Erdogan places at least some of the blame for his country’s recent instability on the media, and particularly on CNN, whose coverage he sees as particularly skewed against him. In Ankara, Erdogan said he was glad that “Mr. Trump put the reporter…in his place.”4

“These are the two most unpredictable leaders in the world.” —Atilla Yesilada, Turkish political analyst

Over the past year, Erdogan has done the same—and much worse—to a number of reporters: arresting more than 144 journalists, and either shuttering or seizing more than 160 media groups. While Turkey has never enjoyed press freedom on par with the United States, in the past year it has deteriorated to abysmal levels, surpassing countries, like China and Iran, that have traditionally been the worst offenders regarding serious violations such as censorship and the jailing of journalists.5

Given this context, Erdogan’s encouragement of Trump’s behavior is alarming, and their relationship—its past, present, and future—is worth examining.6

“These are the two most unpredictable leaders in the world,” Atilla Yesilada, an Istanbul-based political analyst with Global Source Partners, told The Nation. “It is an ‘anything can happen’ kind of environment. But to be honest, I think that Ankara is going to be very frustrated with Trump.”7

Erdogan has not always liked Trump. Last summer, as the leading Republican presidential candidate was rallying his supporters with promises to ban all Muslims from entering the United States, the Turkish president expressed concern about Trump’s Islamophobic rhetoric, even insisting that his name be removed from Istanbul’s Trump Towers. The request went nowhere, and Trump’s name remains there today.8

However, the tide of their relationship changed the morning after the July 15 attempted coup. After Erdogan spent the night mobilizing his supporters to stop the coup—a military assault that cost 265 lives and injured thousands—Trump publicly congratulated him on his success, attributing the failure of the coup to Erdogan’s leadership.9

After the July coup attempt against Erdogan, Trump and Erdogan’s support for each other began to crystallize.

As the aftermath of the coup unfolded, Trump’s admiration for Erdogan, and Erdogan’s support for Trump, began to crystallize. Once Erdogan publicly blamed the attempted coup on Fethullah Gülen—an exiled cleric living in the Pocono Mountains of Pennsylvania—the American presidential election became increasingly relevant to Turkey. A new president could mean Gülen’s arrest and extradition, a favor for Erdogan that the Obama administration refused to grant.10

When ties between the Hillary Clinton campaign and Gülen’s vast network of followers surfaced a few months later, Erdogan and his followers increasingly came to see her prospective victory as a serious threat to Turkey’s interests. Gülen himself publicly supported Clinton, claiming that she had always been cordial with him, and that the two had even been “pen pals” during her husband’s sex scandal in the 1990s. Despite his Islamophobic rhetoric, Trump became Ankara’s clear choice for the White House—however unexpected that alliance might at first have seemed.11

“It’s sad for a country of 80 million people to look at its most important ally through Fethullah Gülen, but it is the reality,” Ilhan Tanir, a Washington, DC–based political analyst, told The Nation. “For a long time, Erdogan has been seeing Gülen as the biggest threat to his control—so this point made people happy.”12

It remains to be seen how durable Trump’s relationship with Erdogan will be. Is it a temporary coincidence of interests between two power-hungry men, who could at some point tire of stroking one another’s egos? Or is it a lasting alliance based on shared admiration, respect, and interests?13

The first indication will be whether Trump follows through by arresting and extraditing Gülen. This would be an important symbolic gesture of respect for Erdogan, and a strategic step toward strengthening relations between Washington and Ankara.14

“It is possible that Trump’s cabinet will see Gülen as another fundamentalist preacher, and want to punish him,” Yesilada said. “However, extradition is largely a legal matter, and could take up to five years. So most likely, Gülen will remain in exile and continue to plot against Turkey.”15

While the question of Gülen’s extradition will set the tone for Trump’s relationship with Ankara in the short term, another issue at stake is whether or not Trump will support Syrian Kurds in their fight against the Islamic State.16

One of the few foreign-policy items that Trump has been consistent on is his promise to “bomb the shit” out of ISIS. He has repeatedly said he will do whatever is necessary to eliminate the security threat ISIS poses to the United States and the Western world. However, Ankara has long described the most effective anti-ISIS fighters, the Kurds of northern Syria, as enemies and terrorists closely allied with the PKK, against which Ankara is fighting a renewed counterinsurgency campaign. The question will be whether Trump can effectively fight the Islamic State without compromising his relationship with Turkey.17

Trump has not formally announced whether he will continue the Pentagon’s current policy of supporting the Syrian Kurds in their fight against ISIS. But Erdogan has made it clear that he will press Trump to end it. He would prefer that the United States instead align itself with Turkey’s recent intervention in Syria—which is explicitly oriented more toward containing Syrian Kurdish actions near the Syrian-Turkish border than fighting ISIS.18

“While Turkey claims it wants to defeat ISIS, it has allowed ISIS cells to flourish inside Turkey.” —Yesilada

“While Turkey claims it wants to defeat ISIS, it has allowed ISIS cells to flourish inside Turkey, committing all kinds of terrorism acts,” Yesilada said, referring to a string of attacks over the past year and a half, including the one that killed 39 at an Istanbul nightclub on New Year’s Eve. “Would Trump necessarily be ready to ditch Kurds, who are currently marching on [the ISIS headquarters in the Syrian city of] Raqqa, and enter a very uncertain relationship with Turkey? I’m not certain.”19

Until now, Trump has played along with Erdogan’s game—rhetorically, at least. He has praised the Turkish leader for his strength in the face of adversity, and ignored the purges of civil servants and persecution of journalists, which have caused other world leaders to reconsider Turkey’s place in the international order. Trump has even borrowed a page from Erdogan’s playbook, shutting down journalists at his own press conferences and vowing to “open up” libel and defamation laws.20

But if Trump ignores Turkey’s repeated requests to arrest and extradite Gülen—or if he continues or even escalates American support for the Syrian Kurds—the relationship between the two countries could rapidly deteriorate. While the balance of power is currently tilted in Trump’s favor, it wouldn’t take much for Erdogan to rescind his overtures and constrict Washington’s abilities to operate in the region (for example, by cutting off American access to the air base at Incirlik, which has been a crucial hub for the US air war against ISIS). That could have untold consequences for American interests in the Middle East. Trump may have the upper hand. Erdogan will have the final word.21