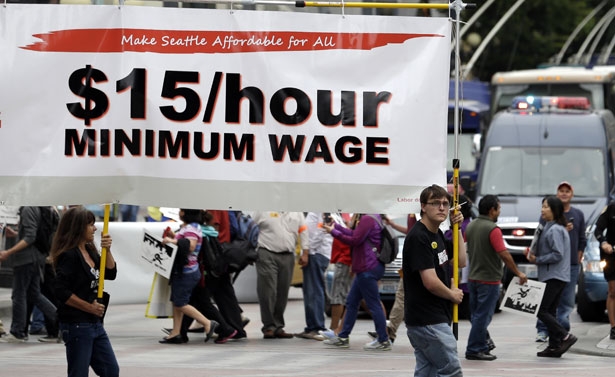 The federal minimum wage has been stuck at $7.25 an hour for five years, even as income inequality has more and more become a pressing issue. Yet as recently as a year ago, prospects for meaningful increase in base pay for the working poor seemed remote.

Now doubling the minimum wage is on the agenda.

Actually, that prospect just moved off the agenda and into official policy in one of America’s largest cities—Seattle—where the city council will on Monday unanimously approved implementation of a $15-an-hour minimum wage. The specific accomplishment in Seattle is strikingly significant; as Seattle Councilmember Kshama Sawant says, “We forced them to lift 100,000 low-wage workers in Seattle out of poverty—to transfer $2.5 billion to workers at the bottom of the wage scale over the next ten years.”

What is just as significant is the context in which it has come, after what Sawant correctly refers to as “decades of wealth being transferred almost entirely from the bottom up.”

American is experiencing remarkable progress at a rapid rate on a vital issue.

A little over a year ago, when President Obama proposed raising the wage to $9 an hour, Republicans said the sky would fall. Democrats were cautious, although a few of them, led by California Congressman George Miller and Iowa Senator Tom Harkin, suggested upping the ante to $10.10 an hour.

But no one in a position of power was talking about doubling it.

That call was raised by the fast-food workers who joined “strikes, marches, boycotts and other mobilizations” in May of 2013. They made the audacious demand for a living wage, putting the figure at $15 an hour.

It was such a bold proposal that Republicans didn’t even bother to ridicule those who advanced it. Even some allies of the Fight for 15 movement saw the “ask” more as an talking point than an actual prospect.

But in cities such as Seattle, the idea took hold. Activists with the group Working Washington say the walkouts that began in late May of 2013 sparked “a new movement to ensure every worker can support themselves, afford the basics, and contribute to the economy.”

Key unions took the idea seriously enough to put a $15-an-hour proposal on the ballot in the Seattle suburb of Sea-Tac, the home of the region’s international airport and a lot of low-wage workers. That made the idea real, especially when a high-spending campaign ensued.

At the same time, Sawant, the Socialist Alternative challenger to an incumbent member of the Seattle City Council, made the establishment of a city-wide $15-an-hour minimum wage the central focus of her campaign.

So did Sawant’s campaign for $15 an hour.

The combination of street heat and electoral action made $15 a viable prospect in Seattle.

So viable that the city’s new mayor and senior council members took it up, adding to the momentum that led to Monday's approval of the $15 wage initiative for the largest city in the Pacific Northwest and the fastest-growing big city in the United States.

Sawant is hailing “a historic [victory] for low-wage workers, for the labor movement and for anyone who believes as I do that no one who works should have to live in poverty.”

Seattle Councilmember Nick Licata calls the plan “a national game changer,” saying, “Seattle, and other cities, are taking direct action to close our nation’s huge income gap because the Federal and state governments have failed to do so. Seattle’s new law opens the way for many workers to earn enough to meet their basic needs. It will raise their standard of living and by putting more dollars into our economy, stimulate greater business opportunities. By significantly raising the minimum wage, Seattle’s prosperity will be shared by more people and create a sustainable model for continued growth.”

While the crowds of union members and community activists packing Council sessions on the issue have regularly erupted in cheers as it has advanced, that does not mean that everyone is satisfied.

“What do we want?” goes the activist call.

“When do we want it?” call the activists.

The Seattle law, as advanced by Seattle Mayor Ed Murray, was framed by a mayoral advisory committee that included labor, business and representatives of nonprofit groups, and debated at public hearings and in official meetings. It features much of what activists wanted, but now everything. For instance, the wage hikes come in steps, rather than all at once, meaning that workers at even the biggest businesses in town will have to wait at least three years to get the $15-an-hour wage.

Sawant unsuccessfully proposed amendments to speed up wage hikes for employees of the largest businesses—those with over 500 employees—and to assure that tipped workers get the full benefit of the wage hike. And she objected to a provision that allows for paying some workers below the minimum, saying, “Any kind of teenage wage or sub-minimum wage goes against the principles of workers standing together. The sub-minimum wage is demanded and liked by businesses because it allows them to bring down wages in general. It’s harmful for workers as a whole.”

Sawant and her allies are not done with the fight. They are gathering signatures for a city charter amendment that would have large businesses paying $15-an-hour starting January 1, 2015, while small business and nonprofits would have a three-year phase-in period. The charter amendment will, if it qualifies for the ballot, face significant opposition from Big Business. And there will be those who suggest that the 15 Now activists are asking for more than can be reasonably obtained.

But just a year ago, there were plenty of folks who said $9-an-hour was an unreasonable goal. Now the debate in Seattle is about how quickly to go to $15. And that debate is spreading to communities nationwide.

What’s clear is that, while Seattle is taking the lead, something big is happening nationally. What once seemed like the boldest of all proposals is rapidly moving into the mainstream, as Los Angeles, San Francisco and other cities consider big boosts in wages.

The activists with Working Washington place appropriate emphasis on the timeline. “On May 30th of last year, Seattle fast food workers went on strike for $15 because they knew that raising pay was necessary—even if in those first days it might not have seemed possible we could get there. But their leadership and commitment helped spark an extraordinary grassroots workers’ movement that rapidly built support across the entire city. Less than a year later, we are on the verge of achieving a $15 minimum wage that ensures every worker in Seattle can support themselves, afford the basics, and contribute to the economy.”

The Working Washington activists says this is “an incredible accomplishment.”

And they are also right when they say that, while Seattle will be the first city to raise the minimum wage to $15, “we won’t be the last.”