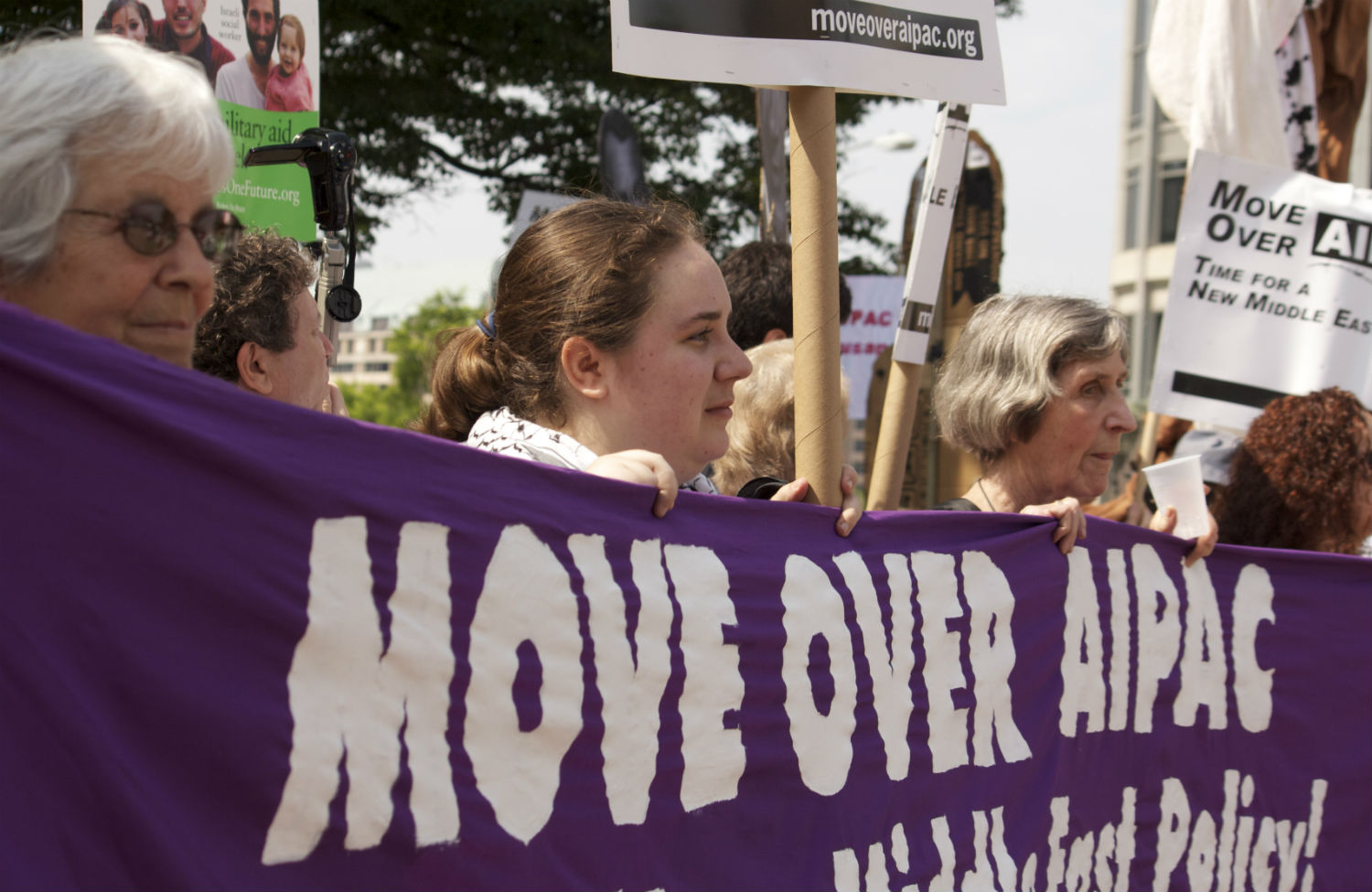 As a secular Jew, I don’t do much praying. But this week, as the powerful pro-Israeli- government lobby AIPAC (the American Israel Public Affairs Committee) holds its annual policy meeting in Washington, I’m praying that this year marks the beginning of the end of the lobby’s grip on US foreign policy.

From March 1-3, over 10,000 AIPAC supporters will descend on the nation’s capital. The meeting comes at a time when the relationship between President Barack Obama and Israeli Prime Minister Benjamin Netanyahu is at an all-time low. House Speaker John Boehner’s invitation to Netanyahu to address a joint session of Congress right after he speaks at the AIPAC conference is seen by the White House as a direct attempt to undermine the president and his administration’s nuclear talks with Iran.

In an unprecedented move, over fifty brave members of Congress have decided to skip Netanyahu’s address.

AIPAC’s support of the Israeli prime minister over the US president is turning AIPAC into a Republican-biased lobby, which could prove fatal to its future influence in Washington. Here are ten reasons why this would be good for world peace:

AIPAC—like the Israeli government—has no faith in the complex negotiations under way between Iran and the United States (along with its five partners) to prevent Iran from obtaining nuclear weapons. It pushes for greater sanctions on Iran knowing that—as Secretary of State John Kerry has said—additional sanctions would threaten the diplomatic path.

AIPAC, which has successfully lobbied the US government to adopt crippling economic sanctions on Iran in the past, is ignoring White House warnings. Its lobby day this year will push for the Kirk-Menendez sanctions bill, which the president has vowed to veto. If the nuclear talks fail, the violence that has engulfed the Middle East will only get worse and will put the United States on a dangerous path to more war.

As of this past year, approximately 350,000 Israelis are recorded as living in illegal settlements, a record high. Despite the fact that United Nations Human Rights Council requested the removal of all of the West Bank’s settlers and cessation of all settlement activities without conditions, settlement construction has increased by 40 percent under Netanyahu.

Israeli settlements violate the Geneva Conventions and can be prosecuted at the International Criminal Court as “gross violations of human rights law and serious violations of international humanitarian law.” No wonder AIPAC doesn’t want Palestine to become a member of the ICC.

3. AIPAC supports the horrific Israeli invasions and siege of Gaza.

Claiming Israel was forced to defend itself against Hamas, AIPAC supported the Israeli offensive during the summer of 2014 called “Operation Protective Edge.” The attack resulted in more than 2,000 deaths (including over 500 children), six UN schools and hospitals flattened, 18,000 housing units destroyed and 108,000 people displaced from their homes.

Robert Cohen, the president of AIPAC, justified the Israeli offensive in a meeting with Congress on July 23. AIPAC also supported the two prior invasions of Gaza and the siege that has left Gaza’s 1.8 million residents living lives of intense poverty and misery.

4. AIPAC’s call for unconditional support for the Israeli government threatens US national security.

Even the since disgraced Gen. David Petraeus admitted that the Israeli-Palestinian conflict “foments anti-American sentiment, due to a perception of US favoritism for Israel.”

Iran, additionally, could be a vital ally for the United States in the Middle East in the fight to control the Islamic State. But because of Israel’s hatred toward Iran and its strong influence on our politicians, US foreign policy reflect Israel’s perceived interests more than ours.

5. AIPAC makes the United States a pariah at the UN.

AIPAC describes the United Nations as a body hostile to Israel and has pressured the US government to oppose resolutions calling Israel to account. Since 1972, the United States has vetoed at least forty-five UN Security Council resolutions condemning Israel’s actions against the Palestinians.

In 2011, AIPAC helped persuade 446 members of Congress to co-sponsor resolutions opposing Palestine’s petition to obtain statehood in the UN. Overriding Washington’s (and AIPAC’s) objections, in 2012 the UN General Assembly passed a motion granting Palestine non-member observer state status by a vote of 138 to 9.

More recently, in response to Palestine’s seeking membership at the International Criminal Court, AIPAC pushed the Obama administration to pull funding from the Palestinian Authority. Despite US opposition, UN Secretary General Ban Ki-moon affirmed that Palestine will become a member of the ICC on April 1, a highly controversial move that will allow Palestine to press charges against Israel for war crimes.

6. AIPAC feeds US government officials a distorted view of the Israel-Palestine conflict.

AIPAC takes US representatives on sugar-coated trips to Israel, which are considered almost obligatory for every new member of Congress. AIPAC hosts members of Congress—and many of their spouses—on a free junket to Israel to see precisely what the Israeli government wants them to see. It’s illegal for lobby groups to take members of Congress on trips, but AIPAC gets around the law by using a bogus educational group called the American Israel Education Foundation to “organize” the trips for them. AIEF has the same office address as AIPAC and the same staff. These trips help cement the ties between AIPAC and Congress, furthering AIPAC’s undue influence.

To prove most of Congress is in the pocket of AIPAC, look no further than what AIPAC boasts about its policy conference, which is that it will “be attended by more members of Congress than almost any other event, except for a joint session of Congress or a State of the Union address.”

AIPAC demands that Congress rubber-stamp legislation drafted by AIPAC staff. It keeps a record of how members of Congress vote, which is used by donors to make contributions to the politicians who score well.

Members of Congress who fail to support AIPAC legislation have been targeted for defeat in re-election bids. These include Senators Adlai Stevenson III and Charles Percy, and Representatives Paul Findley, Pete McCloskey, Cynthia McKinney and Earl Hilliard.

More recently, many Democrats who have publicly refused to attend Netanyahu’s speech in March have been directly targeted by AIPAC’s largest supporters. A representative of billionaire casino mogul Sheldon Adelson warned that “if these Democrats would rather put partisan politics ahead of principle and walk out on the prime minister of Israel, then we have an obligation to make that known.” Adelson and Netanyahu’s other powerful right-wing supporters have vowed to use their wealth and extensive resources to punish Democrats who skip the speech.

8. AIPAC attempts to silence all criticism of Israel by labeling critics as “anti-Semitic,” “de-legitimizers” or “self-hating Jews.”

Journalists, think tanks, students and professors have been accused of anti-Semitism for merely taking stands critical of Israeli government policies. These attacks stifle the critical discussions and debates that are at the heart of democratic policy-making.

9. AIPAC lobbies for billions of US tax dollars to go to Israel instead of rebuilding America.

With communities across the nation slashing budgets for teachers, firefighters and police, AIPAC pushes for over $3 billion a year in foreign aid to Israel. This money goes to the Israeli military to maintain, in high-tech fashion, the apartheid system of oppressing Palestinians.

10. Money to Israel takes funds from the world’s poor.

Israel has the twenty-fourth-largest economy in the world, but thanks to AIPAC, it gets more US tax dollars than any other country. At a time when the foreign aid budget is being slashed, reserving the lion’s share of foreign assistance for Israel means taking funds from critical programs to feed, provide shelter and offer emergency assistance to the world’s poorest people.

The bottom line is that AIPAC, which is a de facto agent of a foreign government, has influence on US policy out of all proportion to the number of Americans who support its policies. When a small group like this has disproportionate power, it hurts everyone—including Israelis and American Jews.

From stopping a catastrophic war with Iran to finally solving the Israel-Palestine conflict, an essential starting point is breaking AIPAC’s grip on US policy. That’s why I’m praying that this time, by snubbing President Obama and offending Democratic members of Congress, AIPAC is careening toward its own demise.