A protester in Yangon raises the three-finger salute that’s become a symbol of resistance across Southeast Asia. (Kenji)

angon—After five years of democratically elected governance, the people of Myanmar are not ready return to military dictatorship. Despite a curfew and martial law, hundreds of thousands of protesters are filling streets across the Southeast Asian country. From the largest city, Yangon, to the delta, mountains, and coasts, people from all backgrounds are shouting “Let the military fall!” and waving the three-finger Hunger Games salute that has become a symbol of resistance across Southeast Asia.

On February 1, the military seized power; arrested Aung San Suu Kyi, the country’s civilian leader; and declared a one-year state of emergency. At first, people seemed shocked and afraid: They stocked up on food, withdrew cash, and stayed indoors. The next evening, they started banging pots and pans from their doorways and balconies. A day later, a song—”Kabar Ma Kyay Bu” (“We Shall Not Surrender Until the End of the World”)—reverberated through the streets of Yangon. A relic of the country’s 1988 student uprisings, the lyrics are sung to the tune of Kansas’s “Dust in the Wind”:

On February 6, activists began marching. By February 8, more than a hundred cities and towns had joined the movement. Protesters are braving not only sweltering heat, the coronavirus, and Internet blackouts but also armed police. Demonstrators have faced down water cannons, tear gas, and rubber bullets. Police have shot and killed one protester with a live round.

The people we interviewed span a range of ages, ethnicities, and political views, and in ordinary circumstances, they might struggle to agree on politics. Yet the desire to overthrow dictatorship has evoked a rare unity among the public.

“I don’t want my children to grow up like I did in this country, to be afraid of people in uniform,” said peace and interfaith activist Thet Swe Win. “I don’t want to go back to the dark age.”

By taking a leading role in the current protests, Thet Swe Win knows he is putting himself in danger. Like many other activists, he has gone into hiding. We interviewed him by phone without knowing his location. “No matter what risks I face, I will keep going for my children, the next generation, and the future of this country. I don’t want to wait 20 or 30 years under the military. We must take action,” he said.

From 1962 to 2011, the former military junta monitored people’s speech and movements, silenced independent media, and suppressed the arts. In 1988, university students led hundreds of thousands in nonviolent protests against the regime, and in 2007, tens of thousands of Buddhist monks peacefully demonstrated in a “saffron revolution.” The military responded to both uprisings with killings and arrests, forcing thousands to flee.

“If we don’t protest against military rule, the next generation will grow up with poor education, health, and governance systems like ours did,” explained Su Chit, a 29-year-old human rights activist in Mandalay, who said she was demonstrating to prevent the country from sliding back into poverty and autocracy.

For La Doi in the Kachin State capital, the feeling was more visceral. “I have headaches just to imagine our future under the military regime,” he said. “We will have to live in poor and desperate conditions, with no rule of law or human rights, access to justice, or decent livelihoods. We will live under coercion, forced labor, and structural violence. We don’t want to return to that nightmare.”

Zaw Htike, a trans man and LGBTQ rights activist for whom we’re using a pseudonym for his protection, said the overthrow of the civilian government shattered his hopes as an activist. “Our efforts vanished like water falling onto the sand,” he said, offering an old Burmese proverb. 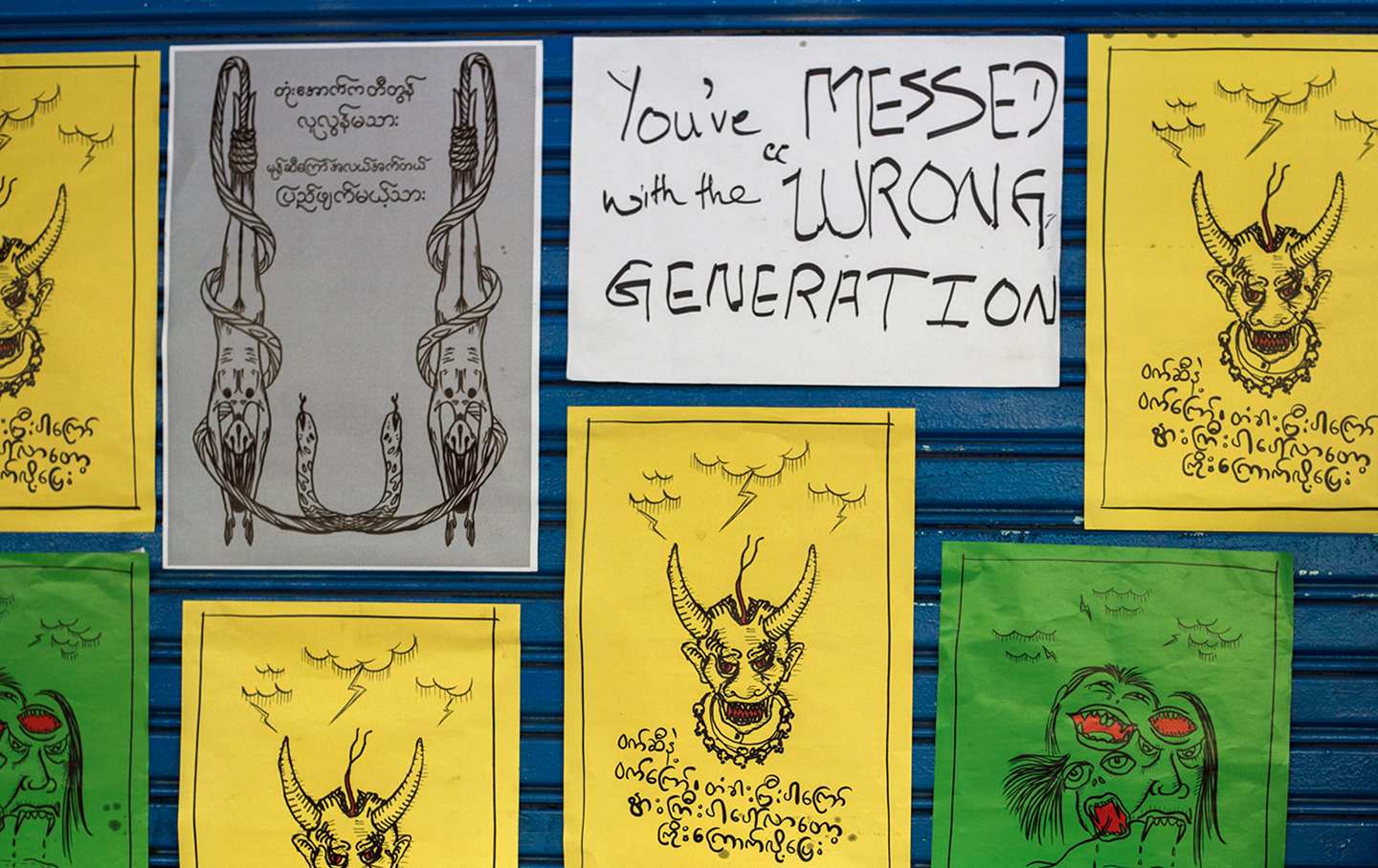 In Yangon, a protest poster reads, “You’ve messed with the wrong generation.” (Kenji)

Many protesters have rallied around Aung San Suu Kyi, who has been widely popular across the country since emerging as a pro-democracy figure during the 1988 protests. The military kept her under house arrest for 15 years, but facing global isolation, sanctions, and international pressure, it released her in 2010 and began a series of political reforms, eventually holding elections in 2015. The military-drafted Constitution, passed hastily in 2008 while the country was still reeling from Cyclone Nargis, bars those with foreign spouses from serving as president, a rule designed specifically to exclude Aung San Suu Kyi. Nonetheless, the landslide victory of her National League for Democracy (NLD) party enabled her to assume de facto leadership.

In 2017, Aung San Suu Kyi’s international reputation fell in the wake of the military’s campaign against the Rohingya in northern Rakhine State. Amid mass killings, sexual violence, and arson, about 740,000 fled to Bangladesh, but rather than condemn the violence, Aung San Suu Kyi defended Myanmar against charges of genocide at the International Court of Justice in 2019. The case had little impact on her domestic popularity, and her party was easily reelected in November 2020. The military seized power just hours before the new government was supposed to be sworn in.

Some protesters have goals that go beyond restoring Aung San Suu Kyi as head of the civilian government. Many want to overhaul the entire political system. When the military drafted the 2008 Constitution, it gave itself oversight over key ministries and veto power over constitutional amendments. The NLD had pledged to push through constitutional reforms during its five-year term, but military-appointed parliamentarians blocked the proposed amendments.

“The civilian government tried to face the military under the 2008 Constitution, and they lost. We must abolish the Constitution and create a new one based upon full democratic principles,” said Wai Yan Phyo Moe, vice chair of the All Burma Federation of Student Unions, which also played a central role in the 1988 protests.

Many among Myanmar’s diverse ethnic nationalities, who largely live in seven ethnic states in the country’s border areas, seek a new Constitution that would grant them federal rights. On the eve of Myanmar’s independence in 1948, Aung San Suu Kyi’s father had promised ethnic leaders a path to self-governance under a federal system if they agreed to join the new Union of Burma. He was assassinated months before independence was achieved, and the failure to realize his promise has sparked some of the world’s longest-running civil wars. Aung San Suu Kyi’s party pledged to prioritize peace and advance a federal system during its term, but made little progress.

Marching in the Kachin State capital, La Doi is among those demanding a new Constitution. Like many people pushing for federal rights for ethnic states, he wore black rather than the red associated with the NLD.

Naw Esther Chit, a Karen youth, said during the February 7 protests in Yangon that she sees the demonstrations as the extension of a 70-year struggle against military dictatorship which the Karen people have been fighting.

“I don’t want oppressive nationalism. I don’t want the majority to oppress other ethnic groups,” she said. “I want [the protest movement] to include our ethnic nationalities’ demands…. I want the whole country to live in harmony and understanding with ethnic people.”

For the more than 300,000 people who fled violence and live in camps, peace and safety are of critical importance. Demonstrating is not an option for many, already vulnerable and often living in isolated areas, but they are protesting in their own ways. Htu Bu, a Kachin youth who fled military attacks on her village nearly a decade ago, reached out to us from her displacement camp near the China border with a written statement and a request that her voice reach international readers. 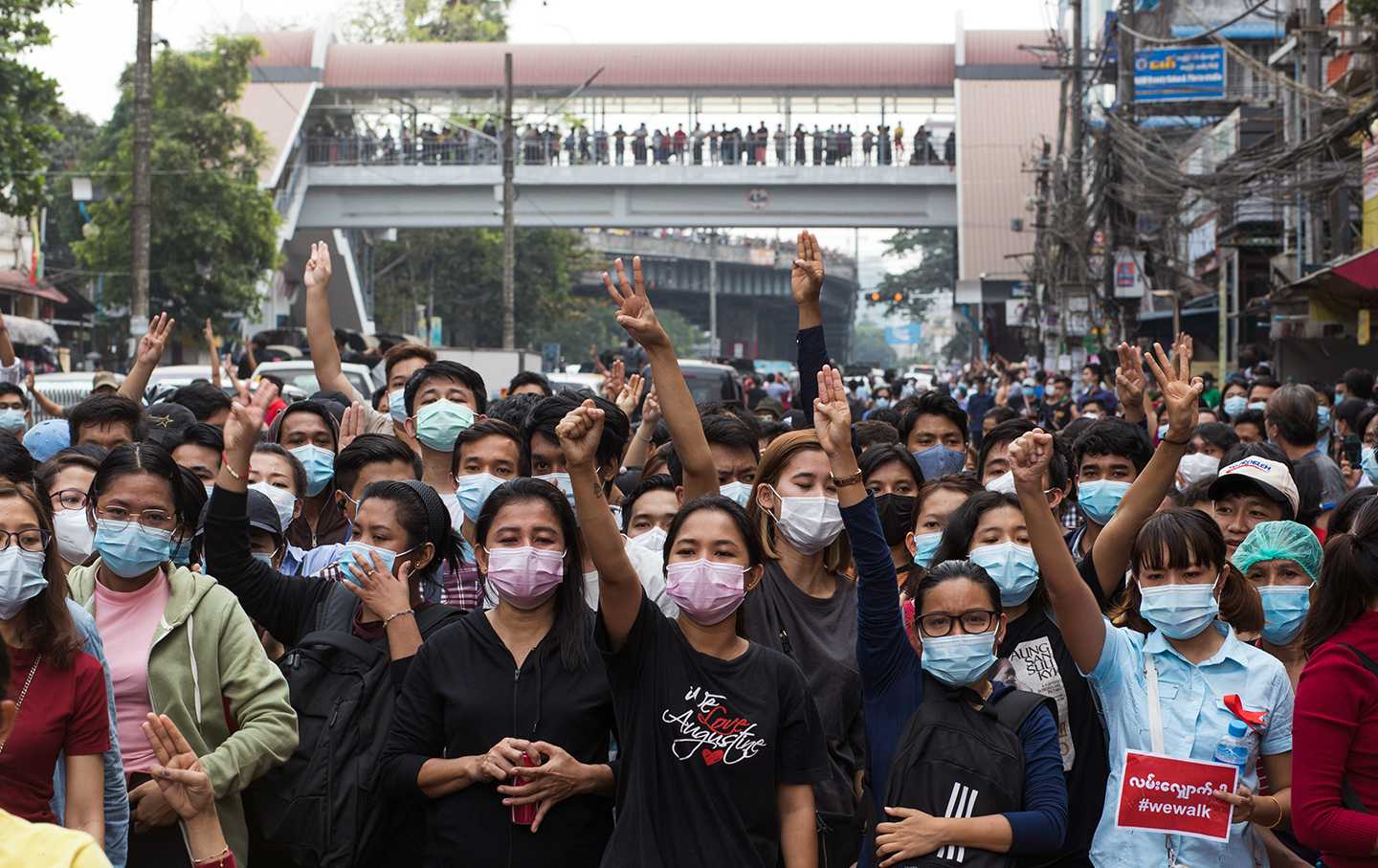 Young people often make up the front lines of the anti-junta protests sweeping across Myanmar. (Kenji)

“We want a true democracy, with justice and real peace,” wrote Htu Bu. “It’s been over 60 years that we [Kachin people] have been living with fear, suffering and hopelessness.”

The Kachin, along with the Rohingya, are among several ethnic populations to have experienced extrajudicial killing, sexual violence, and torture at the hands of the military. In 2018, a United Nations fact-finding mission called for Myanmar’s top military leaders—including Senior General Min Aung Hlaing, who now holds power—to be investigated for war crimes and crimes against humanity in three states, including Kachin.

Now, people are demonstrating across more than 300 towns and cities, and a civil disobedience movement of striking government workers is rapidly spreading, bringing energy and hope to the public.

In the town of Tachileik near the Thai border, Ye Yint Thu, who requested we call him by his nickname, hopes to be the first in his family to grow up under a democratic system. In addition to joining the street protests, the university student, whose parents were jailed for their participation in the 1988 protests, has been banging pots and pans every night with his grandmother. “My grandma is very angry because she experienced the [1962] military coup, the 1988 protests, and now this. She despises military dictators,” he said. “I am protesting, because I don’t like dictators either.”

Although authorities are arresting protesters and armored vehicles are increasingly appearing in cities and towns, the demonstrations are gaining momentum. One evening last week, Min Aung Hlaing gave a televised address in which he pledged to hold elections and deliver a “true and disciplined democracy” to the people. But in households across the country, his words were drowned out by the sounds of people banging pots and pans. In Yangon, amid the clamor, the lyrics of “Kabar Ma Kyay Bu” rang out: “We shall not surrender until the end of the world.”